This article is part of our in-depth coverage. Read more like this...
EL TARRA

Rosalba Duran and her family of 11 live in a single-room wooden hut on a patch of local government-owned land on the outskirts of El Tarra, in Colombia’s northern province of Norte de Santander.

Eight-months ago she had a house in town, and her husband a job at a next-door fish farm. But the home they had lived in for 25 years was also next to an army checkpoint, which had come under repeated fire by guerillas of the Revolutionary Armed Forces of Colombia (FARC).

The Duran family felt they had no choice but to move to this miserable stretch of mosquito-infested land, without running water, kilometres from the nearest schools. They are now officially part of the roughly five million - one in 10 Colombians - displaced by the conflict waged by the FARC, its revolutionary cousin the National Liberation Army (ELN) and successive governments since 1964, originally over land reform and social justice.

Norte de Santander, bordering Venezuela, forms part of a corridor of instability stretching across the mountainous northern part of the country to the province of Choco on the Pacific coast.

The prominent graffiti extolling the FARC and ELN throughout these Andean towns, even a banner across the road in one setting the speed limit and levying a fine on those that disobey, underlines this is a contested region - despite the peace talks under way in Cuba between the FARC and the government of President Juan Manuel Santos.

The mayor of El Tarra, Jota Mario Arenas, is honest over the difficulties he faces in trying to walk the line between the guerillas and Bogota, in a town in which the insurgents wield tremendous influence. Central government feels distant here, soldiers nervously patrol the streets, potential targets for the mines and improvised explosive devices increasingly employed by FARC and ELN. The only doctor at the health post quit recently - the rumour was he had been threatened.

Since June the Catatumbo region of Norte de Santander has been in turmoil with clashes between farmers and the army over the government’s periodic coca eradication programme. Farmers say it will deprive them of a livelihood as no alternative crops are established before the coca is uprooted, while the government accuses the FARC of provoking the unrest and a strategy of “confinement” - the closure of roads in the area, locking up local communities, affecting their access to supplies.

“I do what I can,” Arenas told IRIN. But it was clear his political survival depends on not rocking the boat in what has historically been a major coca growing region, where smuggling - petrol from Venezuela included - is routine, a “vacuna” or unofficial tax is added to virtually every purchase, and the state struggles to provide services, security, and the opportunities that would allow young men to resist taking sides in this conflict.

But it was to the local authorities that the Duran family turned to for help. Although land was provided, it was just 200 metres from an oil pipeline the guerillas had tried three times to blow up. When IRIN visited, the Durans had received two payments amounting to US$1,100, and were expecting a third and final installment from the Victims’ Support Unit. “This is not enough for so many,” Rosalba said.

According to the government’s figures, Colombia has 4.7 million internally displaced persons (IDPs), based on monitoring that started in 2000. NGOs, which begin their count from 1985, put the number at 5.7 million.

FARC graffiti in an Andean town 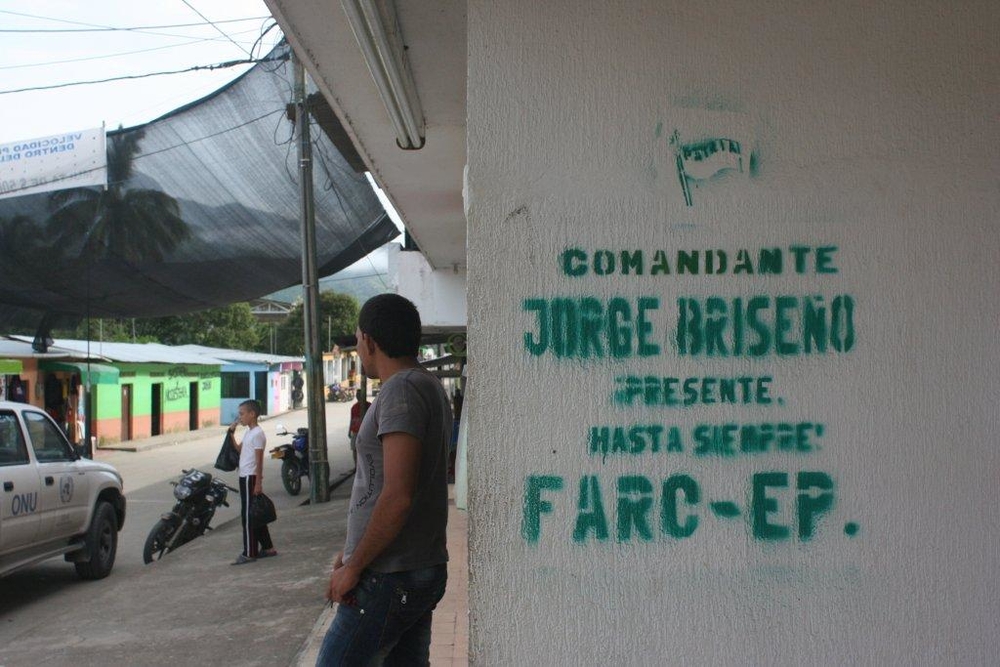 For the UN Office for the Coordination of Humanitarian Affairs (OCHA), the significant point is that the numbers are increasing. “There were more people displaced in the first quarter of this year than over the same period last year. Although they’re talking peace in Havana, there are still growing numbers of IDPs, more people affected by mines than in Afghanistan, and a reduction in humanitarian funding,” OCHA’s head of office Gerard Gomez told IRIN.

Colombia’s IDP policy looks progressive, strengthened by Santos and key court rulings. It recognizes IDP rights, including to emergency assistance, social support and land restitution. “Unfortunately many of these rights are routinely violated,” wrote Mary Small, assistant director for policy at the Jesuit Refugee Service/USA. “In general, programmes for IDPs do not cover all IDPs, are uneven in quality, end too soon, and are underfunded.”

“They are great laws, but the problem is implementation,” explained Gabriel Rojas of the NGO CODHES. How IDPs are registered - and the trust required in the authorities to put your name down - is one area. Until a constitutional court verdict earlier this year, the law did not recognize the casualties of the expanding violence of the right-wing former paramilitaries known as BACRIM, which will increase the demands and costs of the programme.

The shortfalls of the system also include a crisis of protection, where IDPs pushing for the rights to land restitution have been attacked, especially by paramilitaries in league with the new landowners; bureaucratic under capacity worsened by the tangle of the various programmes; and the basic problem of implementing care and support in the middle of a conflict where the government has incomplete control of the country.

Military pressure has pushed the FARC and ELN into hard-to-reach areas like El Tarra, or along the under-developed Pacific coast, and an eastern axis covering Arauca, Casanare, Vichada, Meta and Guavaire. Many of these disputed regions are drug producing, mineral-rich, or straddle lucrative smuggling routes. It is terrain shared with the BACRIM, elements of the former death squads, which after demobilization in mid-2000 re-emerged as rich, networked and ever-ruthless mafias. Along with the guerillas, they have a mutual interest in maintaining the state at arms-length and their stake in the illicit economy.

“For the overlapping armed groups of guerillas, paramilitaries, and narcotraffickers, the fight is now primarily about control of territory and the drug trade,” said Small. “As the war has become de-ideologized, the guerillas have moved away from reliance on voluntary local support and toward the strategic use of terror.”

The violence employed by the guerillas, BACRIM and the military gives Colombia the world’s largest population of IDPs. It is to a great extent a rural crisis, in which Afro-Colombians and indigenous people are disproportionately affected. Although constituting just 14 percent of society, they made up an estimated 83 percent of those driven from their homes in 2010, according to a Global Humanitarian Assistance report.

"In a country where you have [lucrative] drugs, gold and extortion, you might get a peace agreement today, but in the coming years there could well still be violence"

The majority of displacements involve a steady trickle of individuals or families moving to the cities. But major upheavals - consisting of 50 or more people - are on the rise. Notorious gangs like Los Urabenos and Los Rastrojos were responsible for the majority of these displacements in 2011, according to the Internal Displacement Monitoring Centre.

Intra-urban displacement is also a growing phenomenon, with vulnerable IDPs shuttling between poor and unsafe neighbourhoods controlled by drug-dealing gangs. “They don’t want to leave the cities because at least they have access to services,” said Rojas.

In the remote ore-rich regions, gold, coltan and tungsten is replacing coca as the main revenue generator for armed groups, with only an estimated 14 percent of the gold produced in Colombia mined legally, notes OCHA. Communities farming the land are in the way, so large-scale forced dispossession is occurring. It can be at the barrel of a gun, a coerced sale at rock-bottom prices, or a land grab legalized by a crooked notary.

Colombia’s long history of strong regions, weak central government and astonishing levels of violence by armed young men, suggests that the crisis may not end with the formal demobilization of the FARC should the Havana talks reach a settlement.

Colombia is a middle-income country and in many respects has the trappings of a modern economy. But “in a country where you have [lucrative] drugs, gold and extortion, you might get a peace agreement today, but in the coming years there could well still be violence,” said Gomez.