Timor-Leste needs to do more at the national and district levels to boost disaster preparedness, especially in rural areas, say experts.

Each year, communities face an increasing number of natural hazards with 185 floods recorded since 2010, compared to 32 between 2001 to 2009, according to the National Disaster Management Directorate (NDMD).

Over 70 percent of the country’s 1.1 million people live in rural areas.

In June, more than 1,850 people in the half-island nation were affected by floods in five of the countries13 districts, the NDMD reported.

“The country is not well prepared to cope and respond to any kind of large-scale natural disaster,” Geraldine Zwack, country director for CARE International, told IRIN in the capital Dili.“If disaster preparedness starts at the community level then the impact on the district is less. It reduces the burden on the government during an emergency response and increases the communities’ ability to bounce back and recover more quickly.”

Aid agencies say an increased focus on disaster preparedness at the national government level is needed, particularly in addressing infrastructure, food security and the livelihoods of poor rural communities who are vulnerable to disasters.

“The country is regularly affected by disasters and the majority of these are small local ones, such as floods and landslides,” said Pedruco Capelao, education in emergencies manager at Save the Children. “There is a need to improve disaster response mechanisms at national and sub-national level, and ensure emergency supplies are stockpiled to allow communities to respond to any disaster.”

According to Maplecroft’s annual Natural Hazard Risk Atlas (2013), which evaluates the exposure and resilience of 197 countries to 12 natural hazards, Timor-Leste is at extreme risk when natural disasters strike, due to its lack of coping mechanisms, and is ranked six and 34 for infrastructure fragility and community vulnerability, respectively.

The overall socioeconomic resilience ranking for Timor-Leste is 32.

The Assessment Capacities Project, implemented by Help Age International, Merlin and the Norwegian Refugee Council, is working to improve the assessment of needs in complex emergencies. In September 2012 a Project report said “urban areas are unprepared for possible disasters” and had particular concern about a “lack of earthquake resistant structures in Dili or district capitals”.

While Timor-Leste is prone to severe and recurrent drought, flooding and landslides, other risks include tropical cyclones, earthquakes and tsunamis, the report noted.

“It is a disaster for the people here, who mostly rely on agriculture for survival, when a flood, landslide or drought hits. When the farmers’ crops are completely washed away, they are left with nothing. The government must work to prepare these communities to respond to these challenges and build infrastructure and resilience to assist people to cope with such disaster,” said Oxfam country director Kunhali Muttaje.

“Most of the government focus is on emergency response and only a small proportion of the budget is directed towards disaster risk reduction (DRR) activities,” emergencies and DRR project officer at Save the Children Jack French told IRIN, noting that “there is a need for the government to create a policy or legal framework and develop a strategic plan for DRR which would allow the ministries and the NDMD to focus more on disaster preparedness at the district level.”

An early warning sign for flood evacuation (Save the Children DRR project), Sesurai, Manufahi District. Flooding is a major problem in Timor-Leste 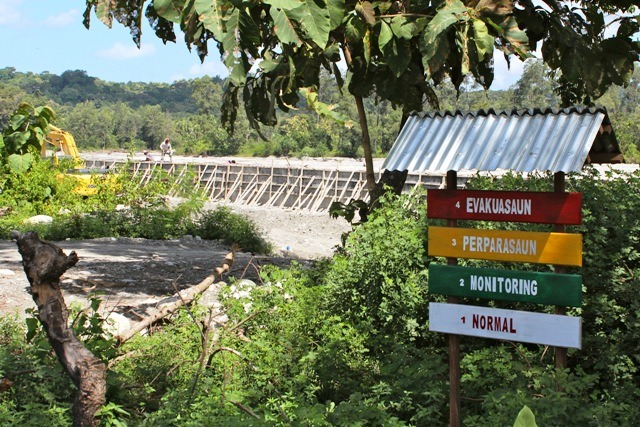 With long-term average temperatures and sea levels rising over the past few decades, climate scientists are warning that things could get worse.

“Many regions and industries are not well adapted to the current range of climate variability, with impacts on agriculture and infrastructure from droughts and floods,” said Michael Grose, a research scientist for the Pacific-Australia Climate Change Science and Adaptation Planning Program (PACCSAP), within the Commonwealth Scientific and Industrial Research Organisation, a scientific research agency based in Australia.

In terms of climate change, “it is likely that sea level rise has influenced the impact of coastal inundation events in vulnerable coastal regions. Heavy rainfalls that may have some influence from human-driven climate change affect the incidence of river floods,” Grose said.

Since 1993, the rise in sea levels globally has increased more rapidly, at 3.2 (+/-0.4) mm/year, compared to 1.7 (+/- 0.2) mm/year in previous years (recorded since 1880), according to the report Climate Change in the Pacific: Scientific Assessment and New Research (Australian Bureau of Meteorology and CSIRO, 2011).

“In Timor-Leste, there is a need to develop systems, procedures and infrastructure to help vulnerable communities adapt. People are not ready to cope with the current climate conditions, and a warming climate will only make these impacts harder to deal with as the frequency or intensity of disasters increases,” said Grose.

The government says it has the capacity to respond to small, localized disasters and a contingency plan in place, initially prepared in 2006.

“Programmes focus on local level capacity building, including improving infrastructure, relocation of vulnerable groups in risk areas, hazard and risk assessment and mapping, and use of local and indigenous knowledge to strengthen the communities’ coping mechanisms,” NDMD director Francisco do Rosario told IRIN.

According to NDMD, legislation is needed to promote coordination between government sectors and the implementation of DRR programmes.

“As the government has acknowledged, increasing climate variability as well as the increasing intensity of extreme events will require greater institutional efforts as well as financial investment to improve resilience, especially at the community level.”