The Egyptian government has taken tentative steps towards reducing the roughly US$20 billion subsidy system that supporters say provides vital aid to the one-in-four Egyptians in poverty, and critics say is unsustainable and enriches the corrupt.

“Most of the subsidies do not go to the people who really need them,” said Osama Kamal, who until the 7 May cabinet reshuffle was petroleum minister.

The government plans a series of piecemeal reforms to revolutionize its decades-old subsidy system in a bid to rein in a runaway budget deficit, and adapt to the conditions of a $4.8 billion loan from the International Monetary Fund.

But as Minister of Supply and Internal Trade Bassem Auda said recently, the subsidy system protects at least eight million Egyptians against poverty, and any changes are highly sensitive.

Manal Metwaly, an economics professor from Cairo University, says cuts will have a devastating effect on the poor: “The government says the subsidy system opens the way for corruption, but it doesn’t have to slash subsidies in order to fight corruption.

Subsidized bread is a permanent item on almost all Egyptian tables; it is a lifeline for the poor, but the system is also frequently abused.

Egyptians consume as many as 210 million loaves of subsidized flat bread every day, helping to make it the world's largest wheat importer.

The government sells a subsidized loaf of bread at the nation's more than 25,000 bakeries for five piasters (less than one US cent) whereas the production cost of the same loaf is more than 40 piasters (six US cents).

“Bread subsidies are a real headache for the government because, like most other subsidies, they open the way for massive corruption and profiteering by a group of dishonest traders,” Hamdy Allam, a senior official at the Ministry of Supply and Internal Trade, told IRIN.

In order to reduce corruption resulting from the selling by bakery owners of subsidized flour on the black market, the government introduced a new system in April, which has been implemented in several governorates and accepted by 15,000 bakeries.

Instead of selling subsidized flour to the bakeries, the bakers buy the flour at the market rate, but are then reimbursed 35 piasters by the government per loaf, to make sure the sales price remains 5 piasters.

The system is expected to be implemented across Egypt in the next two months after all the nation's bakeries sign up to the reforms.

The government’s aim here is to reduce corruption rather than financial support for poor consumers.

What’s the plan for ration cards?

Egypt's ration cards date back to 1964 when the population was less than 30 million. Back then, the government earmarked two million pounds ($301,204) to give citizens rice, sugar, lentils, cooking oil, and tea at subsidized rates.

Now, the government spends as much as nine billion pounds (US$1.3 billion) every year on the food subsidies, which go to around 17.6 million families (around 68 million people).

In July, the government plans to start limiting ration cards to citizens whose monthly income is below 1,500 Egyptian pounds (US$216), but at the same time is planning to allow children born after 2005 in low-income households to be registered for the cards, reversing a suspension of registrations introduced under President Hosni Mubarak.

The minister of supply also announced last week that it would be working to improve the quality of ration card goods, which have a poor reputation.

…and for energy subsidies?

Energy is by far the largest recipient of subsidies.

The Petroleum Ministry produces oil to the value of 165 billion pounds (Arabic) (US$23.8 billion) every year, but then sells these products for 50 billion pounds.

Most energy subsidies go on factories and industrial projects, which get their energy needs at less than market prices. But private vehicle owners also benefit.

The government has already started reducing subsidies on car fuel, and targeting 95-octane gasoline was the first step in this regard.

Gas cylinder subsidies are enjoyed by almost every Egyptian household 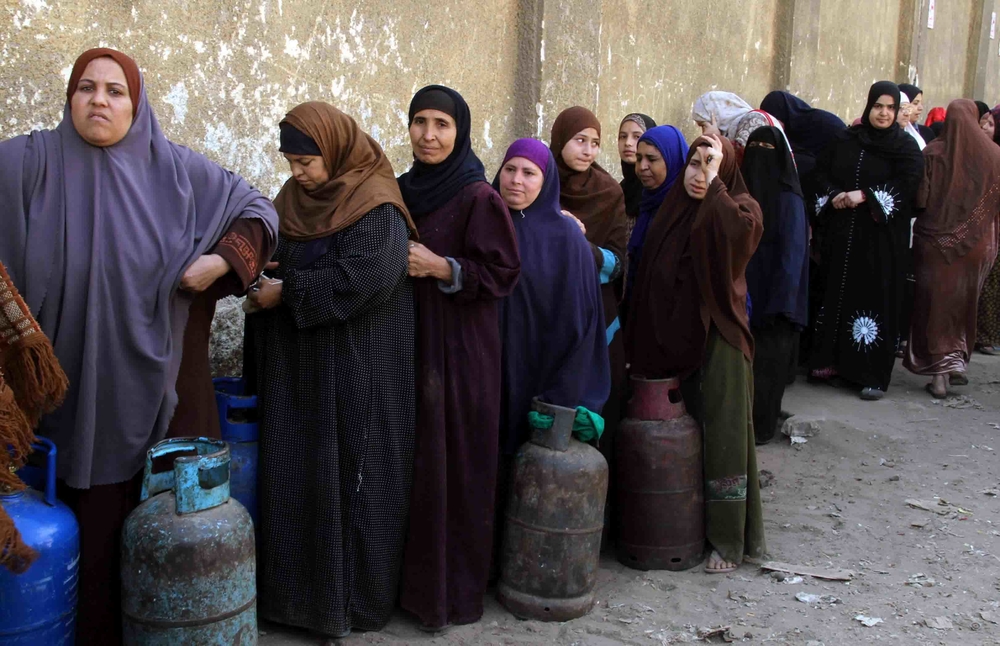 The government says that from July it plans to cut subsidies on car fuel by 10 percent in the first stage of the reforms, but this will rise to 50 percent within five years. If applied in July, the government says, the plan will bring overall fuel subsidies down to 99 billion pounds (US$14.5 billion).

To do this, it plans to give coupons or smart cards to car owners allowing them to purchase limited amounts of subsidized fuel.

Gas cylinder subsidies are enjoyed by almost every Egyptian household.

Although the production of one cylinder costs 78 pounds ($11.2), until recently the government sold the same cylinder to the public for five pounds (72 US cents).

The government started implementing the first stage (Arabic) of the gas cylinder subsidy reform plan in April by raising the price of the cylinders to eight pounds ($1.15) for homes and 16 pounds for restaurants and shops ($2.30).

The government says it will start distributing gas cylinder coupons in July in all governorates.

The price of a cylinder without the coupons is expected to rise to 30 pounds ($4.3). The government says the coupon system will save three billion pounds a year.

Egyptians consume as many as 360 million gas cylinders every year.

Egypt has long discussed subsidy reforms, but has struggled to change a system seen as both unsustainable but too sensitive to reorganize.

A senior Muslim Brotherhood official, who asked not to be named, told IRIN the government was determined to push through reforms.

“We will not buy votes at the expense of the national economy. This subsidy system must be reformulated in ways that allow the subsidies to reach the people who really need them.”

Given the continued street protests and the upcoming parliamentary elections, analysts say the government will need to argue that reforms are about reducing corruption rather than hitting the poor.

“Some of the measures we take are unpopular. They will make people hate us. But this is not what we care about. We only care about putting the economy of this country back on track,” said the official.

Politicians have always feared social unrest from the inevitable price rises that will result.

“The price of one ton of concrete iron [iron bars used in the construction industry] jumped 30 percent as soon as the government slashed the subsidies on energy for concrete iron factories,” Rashad Abdo, head of local think tank Egyptian Economic Forum, told IRIN. “The same will happen with all other commodities. Ordinary citizens will foot the bill at the end of the day.”