Read about what we achieved.
DACCA

Corpses are still being recovered from Bangladesh’s worst industrial disaster ever - a factory building collapse on 24 April that killed at least 600 workers near the capital. Government experts are scrambling to prevent a repeat.

“This is a wake-up call for us because a lot of construction is going on in Dhaka [the capital] and other cities, so we are definitely trying to find out the solution,” said Abdus Salam, a senior research engineer in the government’s Housing and Building Research Institute (HBRI).

One government explanation for the accident is that shoddy construction combined with vibrations from inappropriately placed heavy machinery brought down the eight-story building, known as Rana Plaza, filled with hundreds of textile workers.

An early damage assessment (still unpublished) by NGO Asian Disaster Preparedness Centre (ADPC) conducted on the day of the collapse revealed how a building intended for retail merchants was being used for industrial purposes. It housed five garment factories that employed at least 3,000 workers and placed weight on the floors (including four huge electrical generators on the third and fourth floors) almost six times greater than the building was intended to bear. Support columns were erected haphazardly. Building materials and methods were below par.

Experts say the building was but one example of a broken system for authorizing, carrying out and monitoring construction; tens of thousands more buildings - and millions of people inside them - face the same fate, said Anisur Rahman, an urban planner with ADPC’s office in Bangladesh.

“We are looking at the foundation for a big disaster.”

Legislation from the 1950s gave the Ministry of Housing and Public Works authority to regulate town planning, while a 2009 Municipality Act transferred that power to local governments. Since then each of the capital’s five municipalities (including Savar, the site of the industrial accident 30km outside Dhaka) has handled its own planning.

“It’s a management mess,” admitted K.Z. Hossain Taufique, an urban planner and director of town planning for the government’s Capital Development Authority, explaining how since the 1980s, as more businesses and people located in cities, responsibility for town planning has been divided between the Housing Ministry and the Ministry of Local Government, creating a patchwork of authorization - and leaving deadly gaps.

The National Building Code from 1993 and building construction guidelines (2008) are rarely - at best weakly - enforced, say government experts. The UN’s highest official for disaster risk reduction, Margareta Wahlstrom, called in 2012 for an update of the building code (a process then under way for one year) to protect the seismically active country from widespread devastation.

But Mohammed Abu Sadeque, director of the governmental Housing and Building Research Institute (which is spearheading the building code’s revision), said with the recent industrial disaster, the problem was not the code (which is “good enough” and “fairly safe and sound”), but rather its lack of enforcement.

Corruption and lack of integrity at all levels - from dishonest architects and engineers to profiteering owners and government officials - means “cutting corners” said Bashirul Haq, an architect in Dhaka who recently served on a government committee revising the building code.

“Dhaka has limited space. Developers are in this market for money and want to squeeze as much as they can into any space. Yes, we have a law, but who is implementing it?” he asked.

Haq has advocated a professional registry of architects and engineers to weed out unethical ones and to boost standards. “Design needs to be more rigorous, especially these days,” said the near-retiring architect, referring to the country’s high risk to natural disasters, as well as the steady pace of factory construction in cities.

The current process of signing off constructions as safe is haphazard and ill-informed, he added. Though companies should submit detailed plans to their local planning officials, which are then approved by an architect and engineer, mostly only rough sketches and outlines are required now, said Haq.

Local government may not have engineers or architects qualified to give approval, he added.

Search and rescue capacity in Bangladesh was sorely tested on , when close to 400 people lost their lives when an eight-story building outside Dhaka collapsed on 24 April 2013 , trapping thousands of most garment workers inside 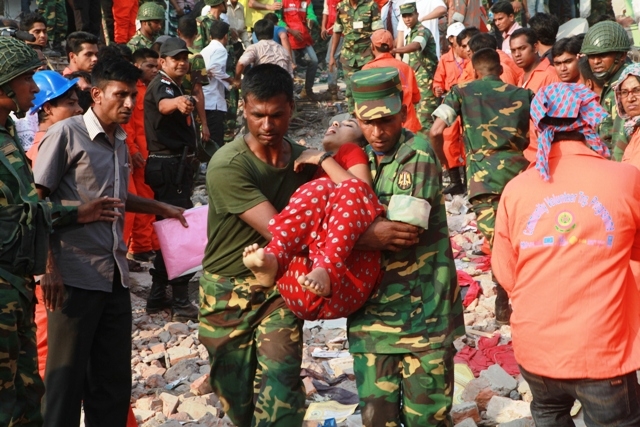 “Overall, building-oriented disaster management needs strengthening,” he concluded. By shaving off 0.3 metre of a staircase’s width, designers can help prevent a stampede during an emergency as only two people are able to fit through at once, which is “only a detail, but an important one”, said Haq. Suggested revisions to the building code are now before parliament.

The building collapse highlighted the dangers of unplanned development, said ADPC’s Rahman. According to the 20-year Dhaka Metropolitan Development Plan, effective until 2015, extra attention was to be paid to construction in Savar due to three fault lines that pass through the municipality, making it the “most severe” earthquake zone nationwide.

“That plan has essentially been ignored, something that everyone shares blame [for], starting with the `Rajuk’ [Capital Development Authority],” said Rahman.

But due to the 2009 Municipality Act, the Capital Development Authority cannot intervene in municipal planning, the group’s chairman, Nurul Huda, told IRIN. “If I were to come over [to Savar’s municipal government] asking questions about land use, they would ask me, ‘Who are you to come here?’”

He said his office has requested the Ministry of Housing and Public Works to “clarify the controversy” surrounding conflicting laws in an effort to regain control of the capital’s planning.

Also needed is a re-evaluation of ways to disperse industrial development to prevent over-construction in any one area, said Rahman. “There are vacant industrial zones to re-locate new factories,” he said, mentioning the southwestern city of Khulna (formerly a jute industrial zone) as one way to spread the risk of buildings collapsing in an earthquake.

“Finding a regulatory body to prevent a similar tragedy - that is our goal,” said Salam with the Housing and Building Research Institute. He said proposals are circulating on boosting local officials’ expertise on construction standards and safety monitoring, as well as creating high-level district committees that will bring together architects, engineers, health officials and representatives from local government and the Ministry of Housing and Public Works.

The country’s Garment Manufacturers’ and Exporters’ Association has asked garment factories in the capital to submit structural drawings, while the labour and employment minister is heading another committee to investigate factories outside the capital.

As of 2011, there were some 5,100 garment factories nationwide employing 3.6 million people, according to the trade organization.

The Bangladesh University of Engineering and Technology is supposed to conduct risk assessments to find the most vulnerable buildings in the capital. Halfway completed is a visual seismic assessment by the government’s Comprehensive Disaster Management Programme of some 400,000 buildings, also in the capital area.

Altogether, there are some 1.26 million residential and commercial structures there, according to the Capital Development Authority.

There are already some 5,000 cases against owners occupying unsafe buildings in Dhaka, but without court orders city officials have not been able to evict them, said the chairman, Huda. Since 2010, processing time has improved somewhat due to three mobile courts handling the backlog, he added.

Rahman from ADPC remains skeptical about pledges to reform the building industry. He heard similar promises following a 2005 commercial building collapse in Palash Bari (near the Savar disaster) that killed near 70 and left dozens more missing; a 2010 chemical explosion in a residential area of the capital caused by improperly stored chemicals, which killed 120; and most recently, a fire in a garment factory in November 2012 that killed at least 100.

But Dhaka’s development authority chairman, Huda, said efforts to change have been under way. Since 2010, his request for more engineers and architects has gone through six departments in three ministries for approval. “We hope to be able to recruit more experts soon.”