In terms of per capita casualty risk, the valley - as the area is known locally - is the most dangerous place in the world.

The capital city and its surrounding suburbs of some 2.5 million people sit in one of the most seismically active areas of the world; declining or non-existent construction standards, haphazard urban development and a population growing 4 percent annually have compounded the risk.

IRIN sat down with leading international and Nepalese experts at both the National Society for Earthquake Technology and the Nepal Risk Reduction Consortium to determine how such an earthquake might play out today.

1005am early May - An intensity IX (Mercalli scale measure) earthquake hits Kathmandu Valley when school is in session and people are at work.

1009 - Immediate aftershocks stop. Some 60 percent of buildings have been damaged or completely collapsed. Few schools remain standing. Schoolchildren in Kathmandu are 400 times more likely to be killed by an earthquake than those in Kobe, Japan.

The US Geological Survey first reports the earthquake, information some newswires pick up, but few details emerge. Mobile phone towers are damaged severely, internet communication is down and electricity coverage is out.

1045 - Significant aftershock lasts 90 seconds. Now 80 percent of buildings are damaged or destroyed. Only a handful of healthcare facilities remain standing.

Residents work feverishly to dig out loved ones using nothing more than their bare hands. The first 72 hours are seen as critical.

A 2001 seismic risk assessment of one of the capital’s (and country’s) main hospitals identified weaknesses, which were only partially addressed as hospitals failed to get the funding they needed.

In the quake’s epicentre, only doctors and health workers who were on duty when the quake hit are able to work; others are either injured or blocked from reaching health facilities due to rubble. Many have died.

1200 noon - Domestic trained “light” search and rescue teams (able to search the surface of a collapsed structure but not venture inside) begin their work. However, capacity is limited and many teams have not been properly trained.

Access to facilities and vehicles is thwarted by rubble, and communications are spotty as only radio and satellite phones function. Foreign embassies use their radio systems to check for survivors.

The government’s National Emergency Operations Centre provides the first official - and skeletal - report on the earthquake.

3pm - Embassies attempt to direct their citizens to meeting points, but databases are not updated to reflect current numbers in the city. Travel by foot is almost impossible. First reports of looting begin. The air is still choked with dust. Parents rush towards completely or partially destroyed school buildings to search for their children, but movement is complicated by debris and safety concerns. Some fires from collapsed gas canisters and fallen electric wires spread.

[Pakistan] US Chinooks ferry food up to quake survivors using the sling method - the quickest way to move the huge amounts of food required by helicopter. [Date picture taken: 01/19/2006] 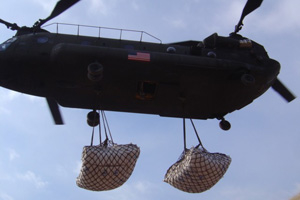 5pm - International newswires carry reports on the earthquake. “A long-predicted earthquake of IX-intensity has hit the capital of Nepal. Kathmandu has suffered devastation in the initial quake and continued tremors. Humanitarian officials estimate tens of thousands missing or dead. Communications are routed through satellite phones, which are in limited supply.”

6pm - As the sun sets, air remains a thick fog of dust. Some people are able to clear space in the rubble, set up tents, light fires to cook and stay warm. Survivors who have emergency food supplies are careful to ration as well as protect them against looting.

As the Oxfam Nepal country director, Scott Faiia, told IRIN: “Haiti was an island, so that meant nautical access was possible. Kathmandu is far more isolated than an island.”

There is no vehicle access to Kathmandu as countless bridges and roads into the city have been knocked out.

The airport, the only lifeline for relief deliveries, has been damaged. C-130 military cargo planes, capable of landing on a short runway space, can land if 1,900 metres of runway remain intact, but a thorough evaluation of the airport is needed before this can happen. The assessment is under way, but with most major roads impassable, getting evaluators to the airport is taking longer than expected. Necessary repairs may take up to a week before flights can land.

There is no safe water supply in the city because pipes have been ruptured. Without an emergency, a break on a main pipe takes two days to repair on average. There are thousands of breaks throughout the city’s main lines, which do not include breaks in lines going to houses. Water tankers (trucks equipped with tanks) are full but many drivers are dead, injured, or unreachable. Those who can access and operate the tankers find all but main roads completely blocked.

With stores and markets in rubble, looting continues. Surviving police patrols are spread thin, and are pitted against residents desperate for food, water, and medical supplies.

International aid workers begin building a humanitarian “hub” outside Simara in southeastern Nepal to receive relief supplies from India by rail through the Nepali border town of Birgunj, for onward transfer to Kathmandu by helicopter and, eventually, road.

Assessments have begun to give a better idea of the damage, but information is still limited. Health facilities and professionals have settled into a 24/7 routine of trying to meet acute trauma needs; facilities, staffing and supplies remain severely limited.

Critical international personnel are arriving by helicopter. Air space, frequency of flights and a memorandum of understanding to allow humanitarian workers to transit through neighbouring India without a visa are under negotiation between the two countries, even while India grapples with collateral damage from the quake. Lifesaving equipment destined for Nepal is stuck in Indian customs in the cities of New Delhi and Kolkata.

Access is still restricted to helicopters. Heavy machinery that survived the quake is now clearing space for helipads and food drops. Embassies have evacuated most staff. Relief workers have arrived from around the world, but are stretched thin.

Of the five deep-drilled water wells around Kathmandu Valley, three are operational, so there is some water coming in, but not nearly enough. Petrol to fuel water pumps is running low because of over pumping and some looting of the fuel.

The situation around the water wells is tense as thousands queue for small amounts of water, which local government officials ration along with water purification tablets. A growing number drink untreated water, putting them at risk of disease.

Fuel for cremations is limited; there is no cold storage for bodies or body parts, which are then discarded haphazardly in burning piles around the city. The smell of burning cadavers permeates the still dusty air.

Students practice triage during an earthquake drill at the Panchakanya Secondary School in Nepal’s Bhaktapur District, 30km outside Kathmandu. 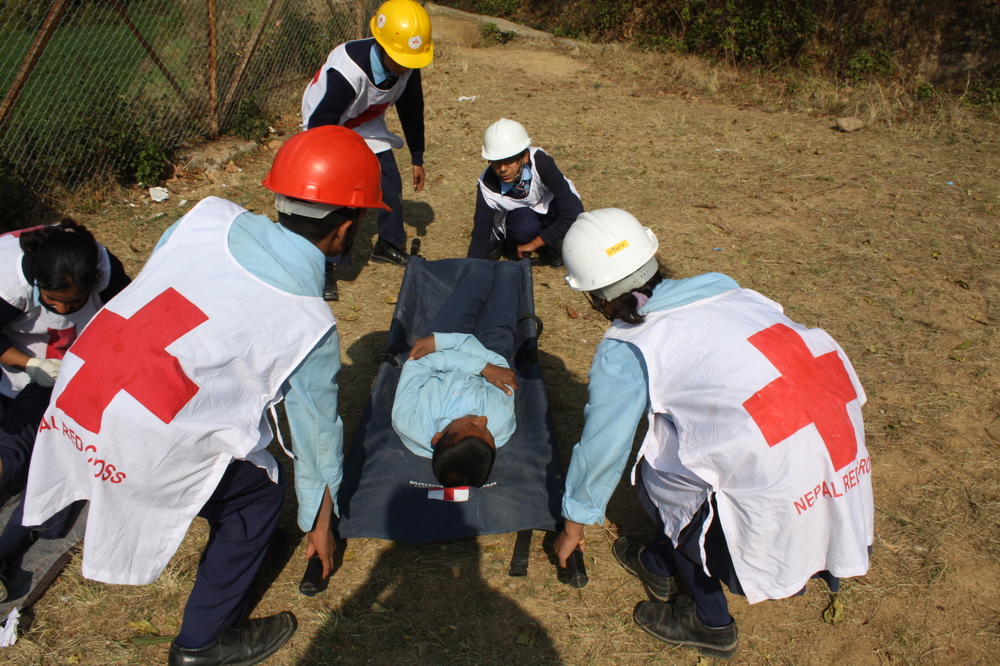 Hospitals are militarized with security forces standing guard to protect healthcare workers and patients from looting and violence. International NGOs have set up some temporary triage tents, but medical needs outstrip services.

More than 550 humanitarian relief organizations are now operating in Nepal. Some are working with communities outside Kathmandu Valley that are hosting survivors who fled the aftermath. Village food supplies are limited as populations swell. Road damage limits ground transportation. Helicopters are the only way to distribute relief goods; scant supplies make it to the hills and mountains outside Kathmandu where a number of survivors are now living with family and friends.

The government has resumed operations in temporary buildings in the south of the country along the border with India some 60km from the quake’s epicentre. Some 30 percent of civil servants died in the earthquake; another 20 percent left the capital and have not returned.

The government has replenished the ranks with some controversial appointments, sowing seeds for a potential political backlash in a country that has already gone through six heads of government in the past five years (with the most recent appointment in March), while failing to agree on a post-conflict constitution after a decade-long civil war.

People who have chronic illnesses and take medication have trouble accessing it. People living with HIV who get their anti-retroviral therapy medication in monthly disbursements from central hospitals now struggle to get supplies. Marginalized groups such as men who have sex with men (MSM) who often access vital health services through local NGOs must now go to mainstream health facilities, risking discrimination and violence.

Risk of sexual violence against women and children increases in Nepal’s temporary settlements despite NGO “protection” efforts. International media attention shifts focus from missing individuals to the failure of the humanitarian response.

One year - and beyond

In Haiti, two years after the earthquake some 75 percent of the rubble in the recovering capital, Port-au-Prince, had been cleared.

After two years, arterial roads in Nepal are functional again, but much rubble remains.

Local government offices and NGOs have erected temporary schools, but attendance is patchy and affected by monsoon rains. With facilities overcrowded and teachers few, children attend school in shifts. Banks and some businesses are running again, but with limited road access to the valley, commodities are prohibitively expensive and many survivors continue to rely on aid rations. Long-term health effects, including a decline in mental health, continue to tax hospitals and other service providers.

Media begins to criticize aid agencies for lack of coordination, creating dependency and lack of a clear transition from emergency to recovery work.

Billions of dollars have been spent on relief efforts so far (some $3 billion were disbursed at the two-year mark in Haiti); rebuilding contracts begin only one year after Nepal’s earthquake.

With so much funding and focus concentrated on Kathmandu, development elsewhere in the country has been neglected and longstanding grievances against the government and donors deepen.

Still recovering from a decade-long civil war that ended in 2006, the country has had no local elections since 1997; a skeletal group of nationally-appointed administrators oversees everything from health administration to irrigation.