When the Ciliwung River breached its banks in Indonesia’s capital, Jakarta, in January, Abdul Majid rushed to move his family and belongings upstairs.

“When I knew the flood was going to be large, I moved all of my merchandise to the roof of the building to avoid losing it all again,” said the 50-year-old Majid, who runs a small kiosk on the ground flood of his home.

In 2007, the last time the capital of some 10 million residents experienced massive flooding, he lost all his merchandise. “I had to use all of my savings and borrow money to buy new goods,” he said.

His prospects for moving to less vulnerable sections of the city are limited. So, like many residents of the city, he makes do, finding ways to limit his liability and hoping the river will be merciful.

Indonesia is one of the world’s most vulnerable countries to natural disasters, but its risks are shifting: Here, as elsewhere in the world, fewer people are dying from floods, earthquakes and volcanic eruptions, even as the economic toll from these disasters is growing.

Preparedness and emergency response to natural disasters have improved worldwide, but equivalent measures to protect economies have lagged, according to Maplecroft, a UK-based consulting firm that publishes an annual Natural Hazards Risk Atlas that assesses countries’ exposure and resilience to natural disasters.

“This upward trend is expected to continue as a result of the rising concentration of people living in areas more exposed to natural disasters and climate change,” noted IMF. 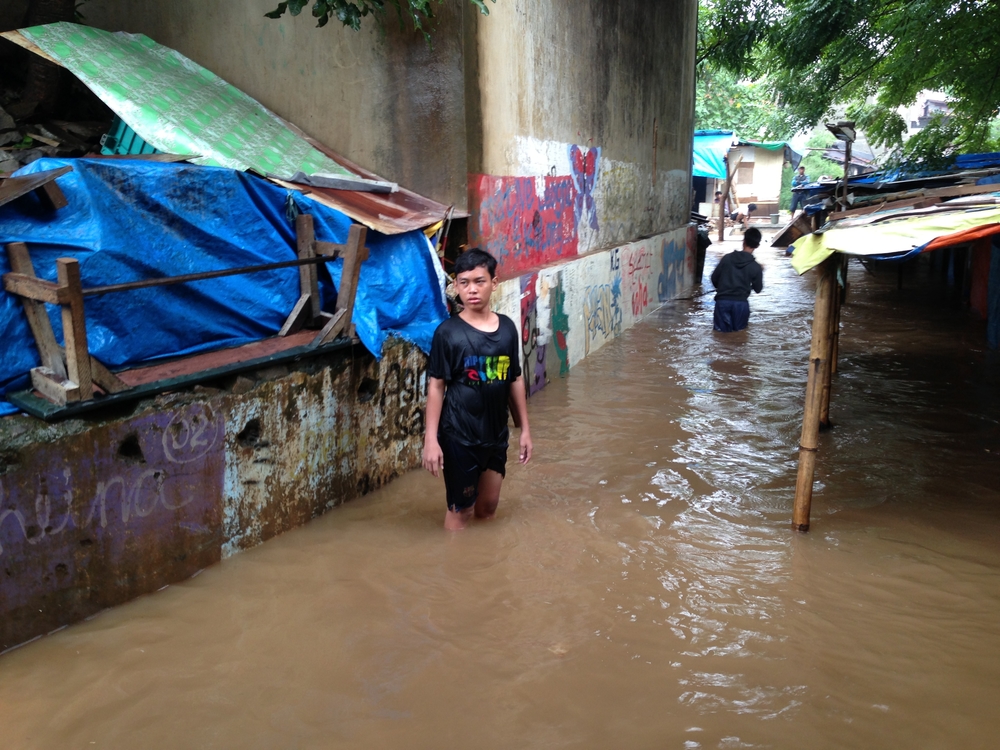 Asia will be the hardest hit, with nine of the 10 cities expected to be most prone to coastal flooding by 2070 located there, according to a 2010 World Bank report.

The region has already experienced a steep economic toll from natural disasters in recent years. In 2011, losses in Asia and the Pacific amounted to $294 billion - 80 percent of the global total of $366 billion - according to the UN Office for Disaster Risk Reduction’s Asia-Pacific Disaster Report for 2012.

The cost of disaster-related damages in Asia and the Pacific increased 16 times since 1980, while the GDP per capita only grew 13 times over the same period.

In 2012, Samoa, Haiti, Fiji, Pakistan, Madagascar and the Philippines topped the list of countries with the greatest natural hazards-related losses as a percentage of their GDP, according to the Brussels-based Centre for Research on the Epidemiology of Disasters.

Although communities in Jakarta have adapted to these risks through painful but practical measures - like habitually sacrificing their ground floors to flood waters - the city’s increasing exposure to natural disasters will likely overwhelm residents in flood-prone areas.

With 13 rivers flowing into the city, Jakarta is naturally prone to flooding. Additionally, as sea levels are rising, Jakarta is actually sinking 3.5cm per year, according to Sutopo Nugroho, a spokesman for National Agency for Disaster Management (BNBP). Some 40 percent of Jakarta now lies below sea level, according to BNPB, making it easier for rainwater to pool rather than drain into rivers or the sea.

Officials estimated that the January floods caused at least $700 million in damage and lost economic activity.

Despite their long-term economic benefits, structural changes to the overcrowded megacity have been difficult to implement.

One of the main methods to ease Jakarta’s exposure to property damage is widening the rivers that pass through the city. However, this has only been attempted on a limited basis, said Nugroho.

Some 34,000 families live on the sections of the Ciliwung riverbank that should be dredged, he said. The government has proposed resettling them in government-provided apartment complexes, but a plan has yet to be executed.

The project will involve large costs to the city and is likely to meet resistance from riverside communities, said Nugroho. “There are many instances of people not agreeing to relocate, and I think we will have the same problem with people living along the Ciliwung. Their lives and work are based around where they are currently.”

A family sits in an alleyway outside their homes along the Ciliwung River in Jakarta. Flood waters in January rose to the top of the first floor of their houses 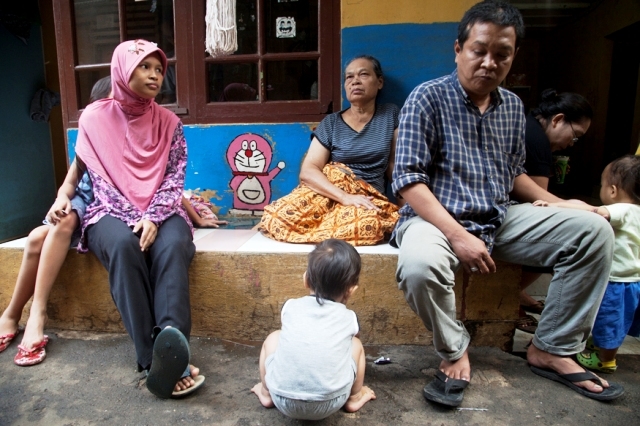 The government’s growing investment in mitigation - efforts to lessen the risk of devastation from natural disaster - is a step forward, said Aris Marfai from the Faculty of Geography at Gadjah Mada University in Yogyakarta, some 550km east of Jakarta.

Disasters in the past decade - including multiple earthquakes, with death tolls in the thousands, and the 2004 tsunami, which killed some 170,000 people in the country - have taught the government to re-conceptualize disaster management, he said.

“Before, the focus was on relief. [It was] mostly reactive,” he said. “But now the government and aid groups are paying more attention to mitigation and preparedness measures.”

The government’s disaster risk reduction (DRR) investments have doubled from less than 0.6 percent of the total budget in 2006 to more than one percent by 2012, according to the UN.

But even this increased investment is outpaced by growing risks, say observers.

The increasing speed with which runoff from the nearby upland city of Bogor reaches Jakarta - a measure of how much less water is absorbed by the soil - shows that the city is growing more vulnerable, said Marco Kusamawijaya, founder of the Jakarta-based Rujak Centre for Urban Studies.