With the world’s mega-cities growing even larger, policymakers - especially those in developing countries - need urban planning that will help these areas withstand the impacts of natural disasters.

The urban population in developing countries is expected to double to four billion people by 2030, from two billion at the start of the century, according to a recent World Bank report on urban planning.

The physical space of these cities is likely to triple in size to 600,000sqkm over the same period, the report revealed, noting that implementing the right planning policies will be “the key to resilient and sustainable development”.

Abhas K. Jha, a World Bank sector manager for urban and disaster risk management in East Asia and the Pacific, based in Washington, DC, told IRIN it is crucial for government officials to build cities’ “resilience” to disaster.

“An assessment of the risk levels, a cost-benefit analysis of available interventions, and an inventory of existing capacity and financial resources can guide decision-makers in cities or in national governments in the prioritization of concrete actions,” Jha said.

He added that the first step is to understand risks at the national, regional and city levels.

“We have seen that disasters can wipe out decades of progress, and that [these] impacts can be felt throughout the whole region and globally, too, through supply chains and trade patterns,” said the Bank expert.

O.P. Agrawal, an urban transport specialist and one of the co-authors of the World Bank report, said planning is paramount to avoid hefty disaster-related bills. “The sooner you get into planning cities, even those cities that are already large, the more cost-effective it will be.”

Having a lead agency helps, he said, “to get good urban planning off the ground” so city services know about one another’s plans, urban emergency services are handled more effectively and land use is regulated more easily.

South Asia is home to some of the fastest-growing cities worldwide. Some of the main cities in the region include Dhaka, Bangladesh, which has a population of 13-15 million and is home to 37 percent of the country’s people, and Colombo, Sri Lanka, which has a population of 753,000. Both are the main economic engines of their countries and are prone to natural disasters, with floods being a top threat.

Asia has nine of the 10 cities expected to be most prone to coastal flooding by 2070, according to a 2010 World Bank report.

Jha told IRIN many cities around the world - including Chicago, New York and Seattle in the US; Enkoping in Sweden; Jakarta, Indonesia; and Manila, Philippines - have actively integrated flood protection into their planning policies.

After months of prolonged flooding in Thailand in late October 2011, experts told IRIN that key ways to prevent urban flooding included developing - and keeping updated - an urban “master plan” that protects concentrations of economic and human capital; spreading out development projects so as to not overload any one city; boosting water resource management; involving the private sector in flood control management; and re-evaluating flood control systems.

India, with its exploding urban population - in the last decade, 90 million joined the national urban population - is increasingly taking note of these tips. In densely populated countries like China and India, even small disasters can leave millions affected.

“We have to keep these millions out of harm’s way,” said Asesh Maitra, former director at the School of Planning and Architecture in New Delhi.

A major road expansion effort launched in 2012 in Kathmandu has left hundreds of more buildings at risk of collapse in the event of an earthquake, experts say 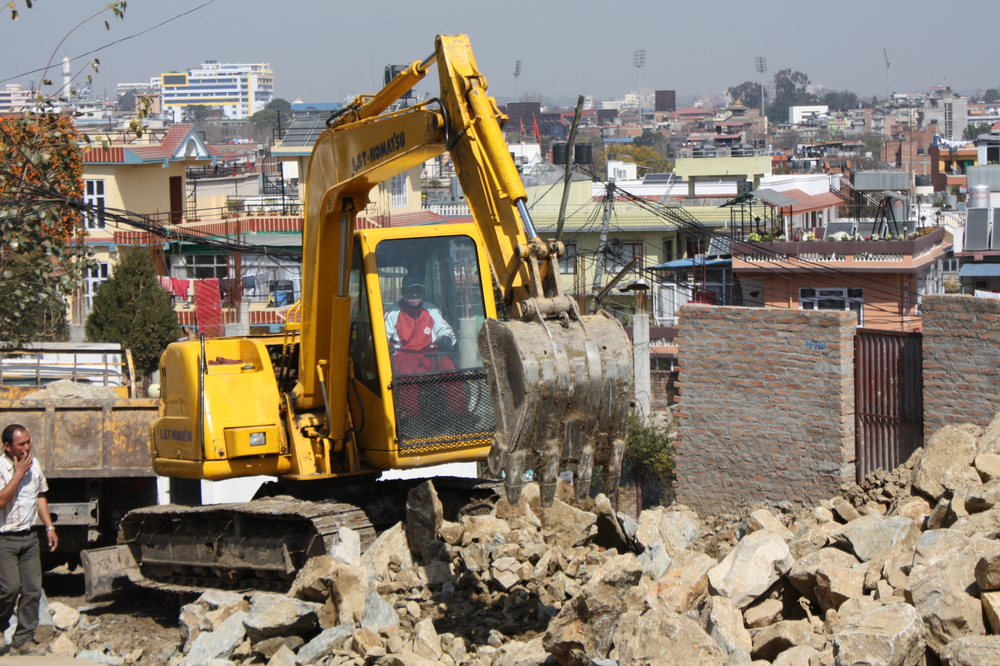 “There are changes taking place. The earthquake and cyclone resistance codes applied to constructions is being changed so that they can withstand disasters. There is also a disaster management institute that trains [public and private] personnel,” said Maitra.

Originally part of the NDMC, the institute now carries out independent training, research and documentation and provides policy advice and analysis.

But experts say India needs to be more proactive.

The World Bank report gave Mumbai’s urban density policies as an example: Mumbai preserves large zones of uniform, relatively low density - an effort to not overburden the city’s infrastructure - instead of applying caps based on street capacity and width, as is done in Manhattan, New York. The report concluded that India’s uniform-density approach promotes sprawl, whereas the rising land values that accompany increased densities could help fund better infrastructure.

Agrawal, the former Indian administrative official, said India needs to promote “compact cities” that concentrate facilities like housing, transport and public services where people are most likely to move or currently live.

Clustered services, along with good public transit, allow for better land use, make it easier to respond to emergencies, maintain drainage and water retention areas, keep waterways clear, and fight sprawl - which can spawn urban disasters, he explained.

City planners trying to save Colombo from frequent, and expensive, flash floods know precisely why the city goes underwater so often.

One reason is beyond their control: changing weather patterns have brought short but intense bursts of rains on the densely populated city. The other is preventable: waterways are clogged and water retention areas are insufficient.

“In the last 10 years we have lost 30 percent of our water-retention capacity [in Colombo],” said Rohan Seneviratne, additional secretary to the Ministry of Defence and Urban Development. The loss is due to land reclamation for illegal constructions, including in marshes and wetlands, the official said.

Flooding in May 2010, when over 500mm of rain was recorded in just 24 hours (about one-fourth the average annual rainfall), caused the city some $50 million in losses, according to an internal World Bank assessment.

The government is now digging six new lakes around the capital city in effort to boost rainwater storage. It is also setting up pumping stations at key outlets to the sea to more quickly flush out floodwaters during storms.

The artificial lakes and pumping stations are part of a $233 million project, primarily funded by the World Bank, launched in mid-2012.

The waterway expansion project is scheduled for completion in 2017.