Whatever the outcome of Kenya’s disputed presidential race, this month’s elections have delivered a mighty boost to the process of decentralizing power from Nairobi, one designed to improve local governance and to reduce marginalization and the risk of conflict between communities.

With devolution, as the process is called, Kenya embarks on the most ambitious and rapid transformation of its government since independence.

“Devolution gears to bring services, resources and power closer to the people. And this power means that citizens will be able to make decisions about aspects and issues affecting them directly,” said Elias Wakhisi, a programme officer at The Institute for Social Accountability (TISA).

This briefing provides an overview of these ambitions, the risks involved, the progress made and the steps ahead. (Many of these themes are also explored in a recent IRIN film, Power to the People, part of the No Ordinary Elections series).

Except for a few years after independence from Britain in 1963, Kenya has, since the colonial era, been a highly centralized state, with considerable executive power concentrated in the capital. The Office of the President is the apex of a hierarchical system of governance known as the provincial administration, which encompasses a vast array of officials, from thousands of chiefs through eight provincial commissioners.

It is a system that leaves most citizens with no say over issues of local importance. Although city and district councils exist across the country, their power and resources are often negligible.

With little money flowing to outer provinces for economic development, millions have migrated to Nairobi in search of work; the capital hosts a range of booming industries while rural areas – especially in far-flung arid regions - have mostly languished.

According to a Society for International Development (SID) report, Kenya is one of the most unequal societies in the world. The remote northeastern Mandera County has the poorest access to services. There, the number of public hospital beds per resident is a tenth of the figure in better-off areas, such as the Central Highlands, according to a 2011 World Bank report.

In Wajir, also in the northeast, 79 percent of children are at risk of chronic malnutrition, compared to 16 percent in the coastal Mombasa County.

“I think [devolution under] the new constitution is good because it brings many things closer. So now [services] are within reach, unlike under the old one, when you could die waiting for Nairobi to respond,” Lucas Lotieng, a pastoralist in the northwestern Turkana County, told IRIN.

Additionally, disparities in power and resources have often fallen along ethnic lines. Though the country has 42 ethnic groups, only a handful of have dominated the political landscape.

What is being devolved, exactly?

Devolution is a pillar of the 2010 constitution, which divided Kenya into 47 counties, each of which are set to have their own executive and legislative branches of local government; these will be responsible for agriculture, transportation, trade licenses, sanitation, pre-primary education, village polytechnics and most health facilities. While overall policy in these areas may still be drawn up by the national government, counties will be in charge of implementation and service delivery.

At least 15 percent of the national budget will now go to these county governments, with provisions for additional funds under certain circumstances.

The national government retains responsibility for security, foreign policy, national economic policy and planning, as well as many areas of education.

What has been achieved so far?

The new constitution, adopted after a referendum in 2010, set out the legal and institutional framework of devolution.

The 4 March elections filled the county posts outlined in the constitution: 47 governors, who head the executive branch of county governments and who will appoint members of executive committees; and 1,450 ward representatives, who are members of county assemblies or parliaments.

Ward representatives were sworn in on 22 March, when they also elected speakers of their assemblies.

The central government has released over 5 billion Kenyan shillings (US$57.66 million) to finance the operations of the county governments for the current financial year.

And several new institutions have been set up to manage the process of devolution. These include:

- The Transitional Authority, which oversees the shift of powers from Nairobi to the county level;

- The Commission for Revenue Allocation, which manages the distribution of budgetary resources between the central government and the counties and among the 47 counties;

- The Task Force on Devolved Government (TFDG), appointed by the government, which put in place six significant bills that would ensure the development of administrative structures to guide the devolution process;

- The Commission for the Implementation of the Constitution, whose mandate includes, but extends well beyond, ensuring constitutional provisions regarding devolution are respected.

Once governors-elect are sworn in on 27 March, the entire machinery of county government will begin to take shape. A whole array of new personnel will have to be trained, assets audited and offices built. Assemblies will begin to draw up local legislation and executives will start to implement them.

Medical clinic with nurse dispensing medicine to a mother with her children in Vihiga, western Kenya 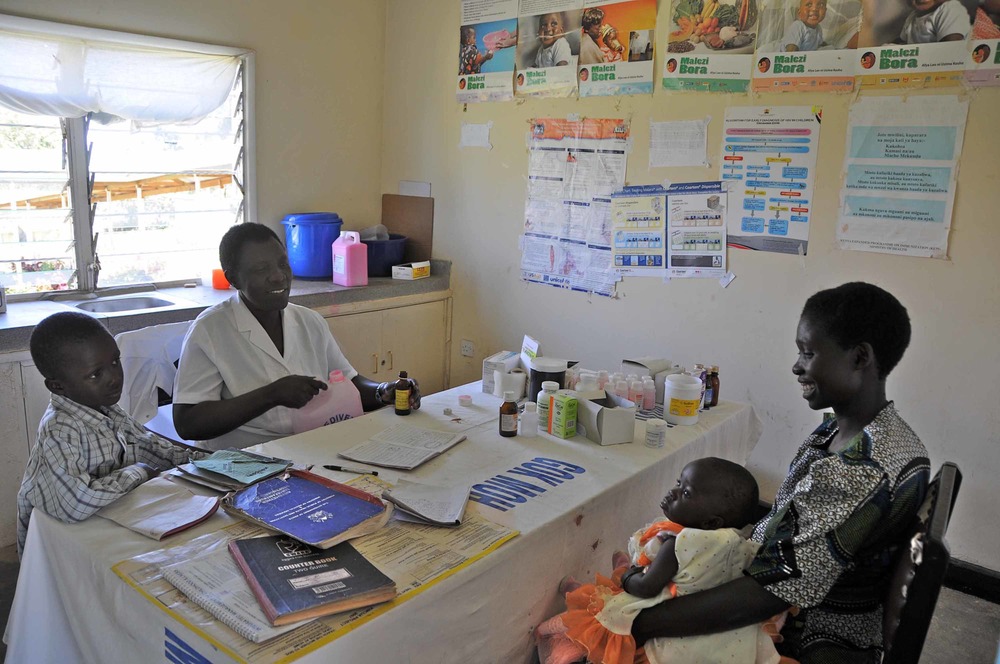 Many practical issues will have to be sorted out, such locating the physical premises of new institutions. Confusion over how the new bodies and officials will work with the provincial administration, and potential power struggles between governors and provincial or district commissioners - who remain in office as an arm of the national government - will have to be sorted out.

It is expected to take several years for the new devolved institutions to be fully up and running.

What challenges lie ahead?

Capacity, corruption, conflict and commitment are some of the areas of concern raised by civil society.

On capacity, there are fears that existing managerial or technical expertise, especially in long-marginalized and impoverished parts of the country, will fall short of what’s required by effective local governance structures. The health sector, in particular, is said to be vulnerable.

Additionally, the corruption and inter-communal rivalries that decentralization is meant to address could  end up undermining the whole process.

“We will now be posting civil servants and other officials to the counties to carry out functions, so there is high likelihood that we will simply be devolving the corruption that has taken place in the centre,” Tom Mboya, deputy Chief Executive Officer of civil society group Inuka Kenya Trust, told IRIN.

Others have expressed fears that rivalries will lead to the exclusion of minority groups from county-level decision-making and resource-allocation, which could exacerbate tensions between communities, possibly leading to violence. (In 2012, almost 500 Kenyans were killed and more than 100,000 displaced as a result of inter-communal conflicts.)

TISA’s Wakhisi said he was confident recent developments - including new legislation, forums for governors and senators, and improved public access to information - had significantly mitigated such risks.

“I foresee a situation whereby relevant institutions that have been put into place will make sure that resources are shared equitably without conflicts,” he told IRIN.

Others say the process is already being challenged at the highest levels; there have been accusations that segments of the political class in Nairobi are resisting devolution in an attempt to cling on to their powers.

According to activist Maina Kiai, over the past year, elements of the central government have “basically been refusing to accept that there’s a new constitution… If that trend continues then there’s likelihood of fallout.”

Such views are gaining mainstream traction. The best-selling Daily Nation newspaper recently warned in an editorial: “Those in central government, especially the team at [the Office of the President], who are plotting to undermine devolution through devious machinations, including administrative fiats, are daydreaming and must be stopped right in their tracks.”

Meanwhile, some finer details of devolution, notably financial ones, remain unresolved. Analyst Jason Lakin pointed out in a recent op-ed that the county governments’ 15 percent share of national resources would only meet half their estimated budget requirements.

“There is an urgent need to define further the responsibilities that counties will have within specific sectors, and then to think through appropriate and fair mechanisms for sharing resources across counties to meet these responsibilities,” Laskin wrote.