The UN Security Council earlier this month relaxed a long-standing arms embargo on Somalia, allowing the government to purchase light weapons for 12 months.

“On the arms embargo, originally imposed in 1992, the Council decided that it would not apply to arms or equipment sold or supplied solely for the development of the government’s security forces, but it kept its restrictions in place on heavy weapons, such as surface-to-air missiles,” UN Security Council Resolution 2093, adopted on 6 March, said.

The government - or member states delivering weapons - are required to notify the Council’s sanctions committee of any such deliveries.

Below, IRIN has put together a briefing on the implications of easing the embargo.

Why ease the embargo?

For more than two decades after the fall of Siyad Barre in 1991, Somalia experienced widespread gun violence in the form of clan conflict and, more recently, conflict involving the African Union Mission in Somalia (AMISOM)-supported government and Islamist insurgent group Al-Shabab.

According to the UN Monitoring Group for Somalia and Eritrea, between May 2004 and July 2011, some 445 instances of arms transfers or seizures, involving almost 50,000 small arms and light weapons, took place in Somalia. Also in violation of the embargo, arms continued to flow into Somalia by land, air and sea from countries like Eritrea, Ethiopia and Yemen.

But following more than a year of relative stability in Mogadishu and many other parts of south-central Somalia, some analysts expressed a desire to see the UN relax the embargo. In February, the Heritage Institute for Policy Studies (HIPS), a Mogadishu-based think tank, urged the US to “lobby for a gradual end to the arms embargo on Somalia… so that the Federal Government can take a qualitative monopoly on the instruments of legitimate violence”.

Easing the arms embargo would, according to HIPS director Abdi Aynte, “gradually give the Somali National Army [SNA] the qualitative edge over their principal adversaries, such as Al-Shabab”.

“At the moment, the SNA is battling Al-Shabab using the same [old] AK47s. They'd have to change, especially if we want the SNA to ultimately defeat Al-Shabab,” he told IRIN. “It would allow the Somali government to gradually monopolize the use of legitimate force. Currently, all actors are armed to the teeth, and that won't change for some time, but it could be reversed over time.”

In a statement, President Hassan Sheikh Mohamud welcomed the decision to lift the embargo as a reflection of “a new and steadily improving political situation in Somalia”.

“Thousands of Somali National Army recruits, trained by our international partners, have returned to Somalia but have been unable to perform their security duties effectively alongside AMISOM troops because the government was unable to access the equipment they needed,” he added. “Lifting the arms embargo was the missing element, and now the gap has been filled.”

"At the moment, the Somali National Army is battling Al-Shabab using the same [old] AK47s. They'd have to change, especially if we want the SNA to ultimately defeat Al-Shabab"

Abdullahi Boru Halakhe, a Horn of Africa analyst, said the resolution made necessary compromises between the need for legitimate weapons and the fear of illegal ones. “The way the resolution was crafted struck a balance between the concerns of those who feel the country is still [too] awash with weapons for the embargo to be lifted, and those who consider the government needs to be able to purchase weapons to provide security for its people,” he said.

Halakhe warned, however, that “even the best laid plans can go awry”.

“The immediate danger is if the weapons find their way in the hands of groups like Al-Shabab through corrupt government officials/security officers,” which could lead to “an incredibly difficult situation, where these weapons could fuel further conflict”.

Two days before the embargo was lifted, rights group Amnesty International called on the UN Security Council to keep the embargo in place, and even strengthen it, citing the possibility of groups like Al-Shabab becoming better armed.

“For several years, the arms embargo on Somalia has been continuously violated, with arms supplied to armed groups on all sides of the conflict. The flow of arms to Somalia has fuelled serious human rights abuses,” Gemma Davies, Amnesty International’s Somalia researcher, said in a statement that stressed the risks of “removing existing mechanisms of transparency and accountability”.

“Without adequate safeguards, arms transfers may expose Somali civilians to even greater risk and worsen the humanitarian situation,” she added.

Countries within the region are wary of the easing of the embargo, fearing that it could, if managed poorly, allow illegal weapons to flow out of Somalia and into the region, where they could be used to create instability.

“As a sovereign state, Somalia is entitled to strengthen its security and defence. The present situation in Somalia, however, is still fragile… The institutions that control and manage small arms are not yet stable, with the AU still the factor holding the peace and return to stability. Already, there are so many illegal guns within Somalia and these are yet to be properly accounted for, managed and effectively controlled,” said Joe Burua, of Uganda’s National Focal Point on Small Arms.

“Letting more arms into Somalia will only give credence to the illegal ones [as] trade commodities, basically supporting illegal trade in firearms as security tightens.” 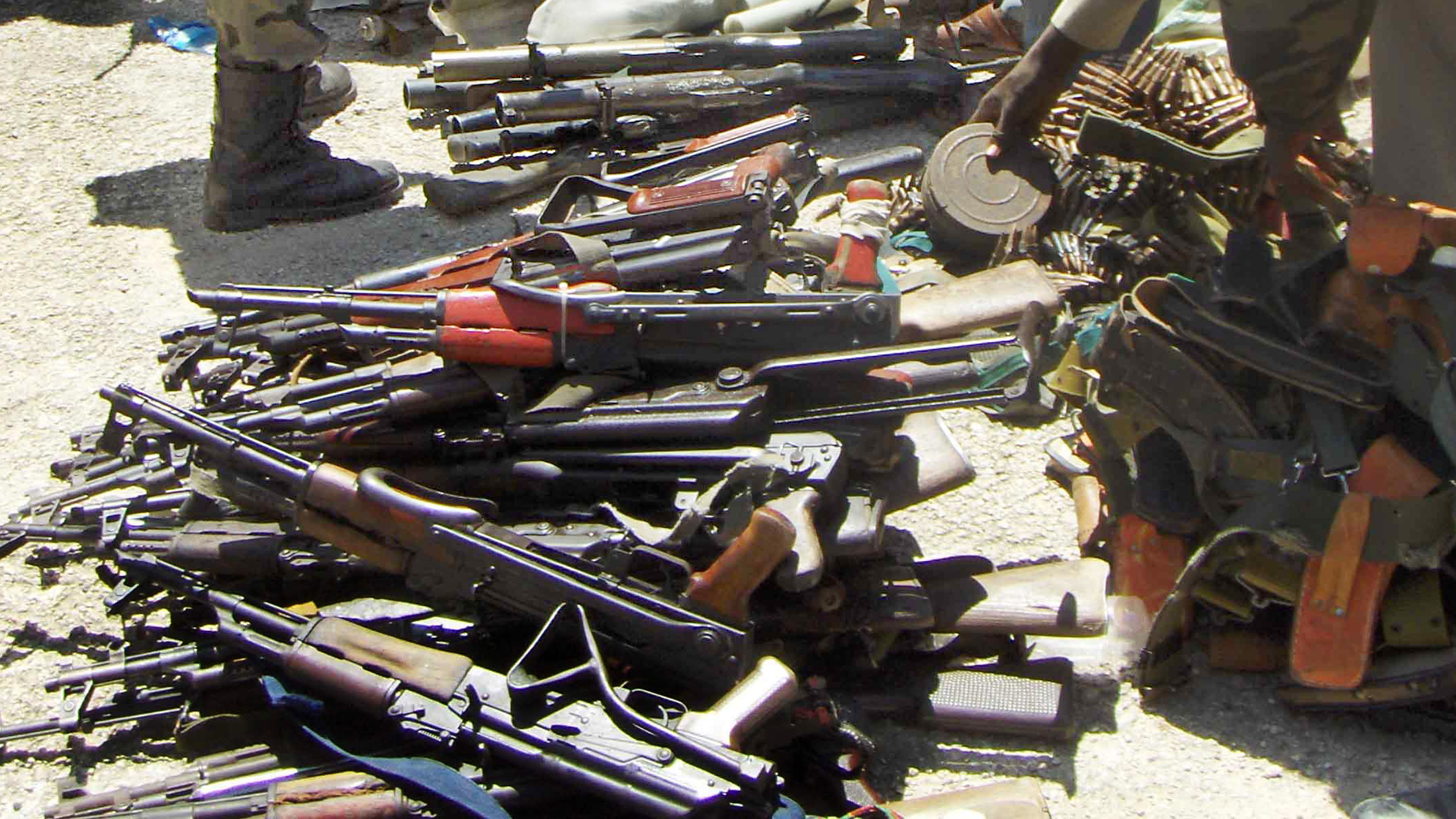 He noted that while experts believe few guns have so far left Somalia for other countries in the region, “the fear is, like the Cold War era of the West and Eastern bloc countries, when the war is concluded, unscrupulous characters will seize the opportunity to engage in illegal trade in firearms”.

What safeguards are needed?

According to Burua, if the lifting of the embargo is to work, Somalia’s government will need to, among other things: strengthen internal measures for the safe storage of firearms; sensitize armed communities about the dangers of possessing illegal firearms; conduct a robust demobilization and disarmament programme; enact an amnesty for armed communities that voluntarily surrender their firearms; strengthen the capacity of the law enforcement agencies to manage firearms; strengthen laws and regulations on firearms; and partner with neighbouring states to strengthen border points and curtail illegal cross-border transfers.

“At this current juncture during the problematic early stages of the Somali Federal Government, the initial issue before armament should be country-wide disarmament,” Kainan Abdullahi Mohamed said in a recent opinion piece for the Somali new service, Garoowe Online. “Firstly and foremost in the capital, where guns are found as easily as any other product such as soap and groceries.”

He further argued that there would be a need to harmonize and reform the army if the easing of the embargo was to work.

Al Jazeera correspondent Peter Greste notes in a 21 March blog that beyond guns, there is a need for ongoing negotiations on an Arms Trade Treaty to impose strict controls on not just weapons, but ammunition as well.

“As it stands, the treaty places trade in weapons themselves under encouragingly tight controls,” he said. “But the treaty shunts ammunition and spare parts to an annex with far loser restrictions. If those restrictions continue to allow a black market to flourish, the treaty fails, especially in places like Somalia.”

Amnesty International has also made the case for stronger controls on ammunition.

Somalia has attempted disarmament several times in the past. The Islamic Courts Union’s disarmament efforts in 2006 were met with stiff resistance by warlords. In 2007, the prime minister of the Transitional Federal Government extended an amnesty to Islamists and established collection points for arms around Mogadishu. This, too, was met with resistance.

There is also the issue of how much of a role AMISOM should play in supporting the purchase or monitoring of weapons. HIPS’s Aynte says that while AMISOM should not, in the long term, be an intermediary in the procurement of weapons, the Somali government needs to first put in place “verifiable mechanisms for purchasing, accounting and accountability before going on an arms shopping spree”.

“There are groups and communities in Somalia and abroad that are legitimately concerned about the capacity of the SNA to buy arms… The government must allay these fears by reforming the SNF and making it more competent, credible, inclusive and, above all, accountable to a strong and transparent judicial system,” he added.

President Mohamud’s statement made it clear that the Somali army would continue to work with AMISOM to execute its duties. The SNA and the country’s police force are undergoing a process of reform with the support of AMISOM, the UN and neighbouring countries like Uganda.

Halakhe, the analyst, said, “I hope besides providing security, the AU forces will able to monitor that these weapons do not find their way into the hands of Al-Shabab and other similar destabilizing forces… We need to move slowly.”