Read about what we achieved.
JOHANNESBURG

On the streets of inner-city Johannesburg, refugees and asylum-seekers are participants in a thriving informal economy, plying their trade as tailors, barbers and street vendors.

South Africa’s laissez-faire policy towards its refugee population means they have little choice but to fall back on their own skills and creativity to survive. And despite the many challenges they face - from xenophobic locals and corrupt officials to limited access to social and financial services - many succeed.

Take Thierry Madiatu, a 42-year-old refugee from the Democratic Republic of Congo, who abandoned his law studies because of insecurity in his home country and moved to South Africa over a decade ago. He eventually found a job as a manager at a small Johannesburg hotel, but with seven children and a wife to support, he started selling fruit on the street to supplement his income. Four years later, his fruit stand has become a small supermarket and café employing five people.

“Everybody needs help,” he told IRIN. “But freedom is also helping. In other countries they don’t give you that freedom.”

Most countries in the region confine refugees to camps where they lack freedom of movement or the freedom to earn their own living. Instead, they are dependent on the charity of governments and humanitarian agencies. The logic underlying this traditional model of refugee protection stems from a view of refugees as people in need of short-term, emergency assistance.

Increasingly, however, refugee crises are protracted, and camps can become refugees’ homes for decades. Not surprisingly, more and more refugees hoping to avoid this predicament are moving to urban areas where they have a better chance of becoming self-sufficient.

Governments and humanitarian groups are start to recognize that treating refugees as passive recipients of aid is both out-dated and - considering dwindling donor support - unsustainable. They are increasingly turning to an alternative model that focuses on supporting refugees’ untapped potential for innovation and self-reliance.

A number of organizations are already shifting their emphasis from giving refugees aid to helping them support themselves. With majority funding from the UN Refugee Agency (UNHCR), for example, Jesuit Refugee Service (JRS) in South Africa is offering training and start-up grants to refugees interested in opening or expanding small businesses.

"NGOs have got to stop thinking like they're welfare organizations...They've got to put refugees in touch with elements of South African society, like the commercial world, the business world"

At the end of a four-day business skills course, which includes sessions on book-keeping, marketing and registering for a trading license, the most promising participants are awarded amounts no more than 10,000 Rand (US$1,123) to meet some of the costs of renting retail space or buying stock and equipment.

“After that, they’re basically on their own,” explained Kanabo Skhosana, livelihoods coordinator for JRS’s Gauteng Province operation, which covers Johannesburg and Pretoria. “We just check up on them quarterly for a year to see if they need any other technical support.”

Madiatu used the training and grant to build up his existing business. “I learned how to run a business properly,” he said. “I thought I knew, but when I went [for the training], I realized there were things I didn’t know.”

The grant money went towards buying a chip fryer, tables and chairs so that he could offer hot food in addition to the basic groceries he was already selling.

“As refugees, we don’t get any help from the government,” he pointed out, adding that refugees also struggle to secure bank loans.

JRS’s livelihoods initiative is relatively new and has so far reached only 88 refugees in Johannesburg and Pretoria - “a drop in the ocean in terms of need,” according to David Holdcroft, Southern Africa director of JRS. He believes a change in mindset is needed among organizations working with refugees.

“NGOs have got to stop thinking like they’re welfare organizations… They’ve got to put refugees in touch with elements of South African society, like the commercial world, the business world. There’s no doubt in my mind that self-reliance is a mechanism whereby protection rights can be provided.”

The extent to which self-reliance is possible, however, depends to a large extent on a host government’s refugee policy.

In countries with an encampment policy, promoting self-reliance is clearly more difficult. Politics and security concerns often contribute to such policies, but they are reinforced by the perception that refugees represent a financial burden and are best put in camps where they will be largely under the care of the international donor community.

The Humanitarian Innovation Project (HIP), a recently launched initiative of Oxford University’s Refugee Studies Centre, aims to change this perception. In partnership with a new UNHCR unit called UNHCR Innovation, HIP is researching the role that innovation, technology and the private sector can play in refugee protection. HIP, together with UNHCR Innovation, will track innovations already happening within the sector, often at the field level, and disseminate best practices.

Anesu Sithole, from Zimbabwe, has been making and selling bedspreads and cushions from a stall in inner-city Johannesburg for four years. Without access to training or capital she cannot expand the business and earns just enough to feed her family 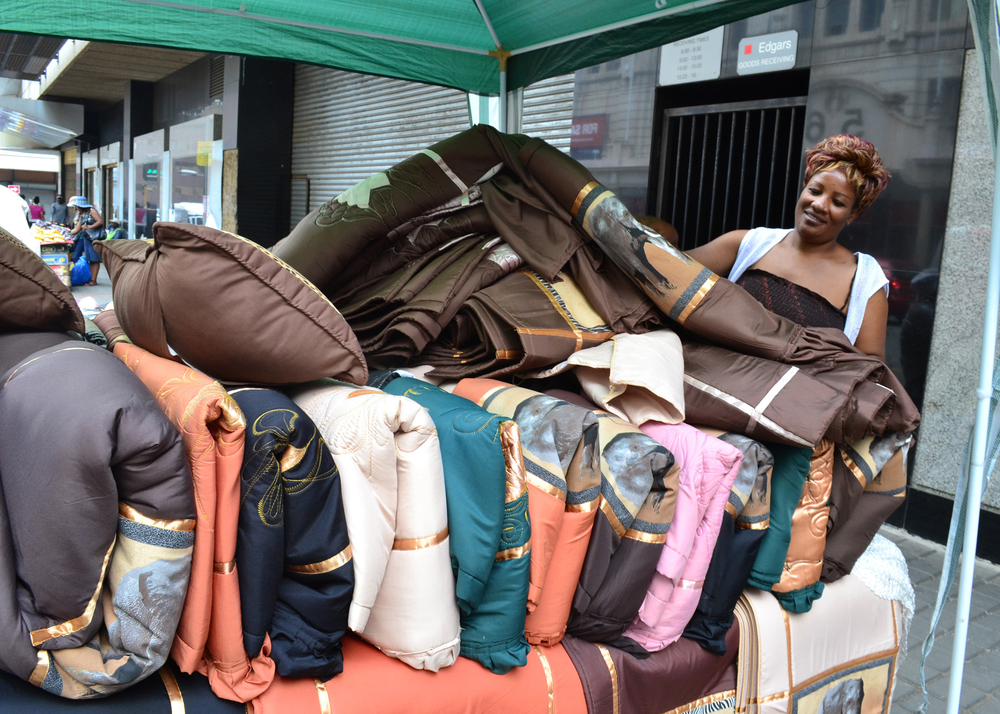 A pilot study conducted by HIP in Uganda - a country that allows refugees to work and actively promotes self-reliance - found that the majority of refugees living in the capital, Kampala, survived with very little humanitarian assistance by building livelihoods based on local demands.

“Politics doesn’t disappear, and the regulatory environment of the host governments changes what can be done dramatically, but if you can gradually start to show that in countries like Uganda, refugees can represent an economic opportunity for the host state and population, you might have the hope of changing the regulatory environment,” said Alexander Betts, HIP’s director and a lecturer at Oxford University’s Department of International Development.

Even in countries where refugees continue to be restricted to camps, many find a way to generate an income by operating small businesses selling goods and services to each other. Technological advances are further expanding livelihood opportunities in camps by opening the way for online learning and “virtual” work. At the Dadaab refugee complex in Kenya, a two-year pilot project run by San Francisco-based non-profit Samasource outsourced small computer-based tasks - part of larger projects from Silicon Valley companies - to refugees who had received basic computer training.

Dadaab’s security challenges prevented the project from being extended, but Betts believes there is potential for far more private sector engagement in the refugee sector, not only in the form of philanthropy and social responsibility, but through innovative partnerships that are mutually beneficial. He gives the example of a company called Technology for Tomorrow, started by a Ugandan engineer, which employs both Ugandans and refugees to produce environmentally friendly sanitary pads that are sold to UNHCR for distribution in Uganda’s refugee settlements.

Refugees have their own ideas about how they would like to become self-reliant, but they often lack the skills or resources to get businesses up and running. One of the goals of HIP is to establish Refugee Innovation Centres - a physical space where refugees, alongside locals, could access vocational training, mentorship, microcredit and computer facilities.

“The vision is very much for a bottom-up approach where the kind of self-reliance activity would be determined by them,” said Betts. “It can’t just be things parachuted in from the outside.”