I will support your work.
CAIRO

Egypt should invest more in modernizing its roads and railways if it wants to bring down the shockingly high number of accidents and fatalities.

Transport Minister Hatem Abdelatif stunned the nation on 13 January when he revealed that road accidents kill as many as 10,000 people every year. (Arabic).

At a seminar in Cairo on 28 and 29 January, transport experts said Egypt’s road network needed redesigning, with more markings and better lighting, and traffic rules needed to be enforced.

Dubbed "Transport Infrastructure Egypt 2013", the seminar sought to shed light on the challenges of, and solutions to, improving road and rail safety in Egypt. It also aimed to involve the government in its discussions and make recommendations.

“We are in dire need to overhaul everything, including the policies,” Khalid Abdel Azeem Abbas, head of the National Institute of Transport, told IRIN.

By investing in road and railway safety, experts said, the government would save some of the billions of Egyptian pounds it spends each year treating accident victims and replacing vehicles, trains and track.

The World Academy of Science, Engineering and Technology in 2008 estimated the economic loss to Egypt from road crashes at nearly US$1.8 billion per year.

How can roads be made safer?

Hans-Joachim Vollpracht, chairman of the Technical Committee at the World Road Association, said the government should not allow construction of homes near motorways (to keep pedestrians away), and should build small roads for farmers near their fields to keep their animals and carts off motorways.

"Roads are very badly designed in this country," he told IRIN. "A better road design will surely bring road traffic crashes down, but driving habits must also change."

International NGO the Association for Safe International Road Travel says reckless driving is a major cause of road deaths in Egypt. It said driver error is behind 69 percent of road crashes, while other factors included burst tyres (21 percent), and defective road planning (10 percent).

Experts recommended more strenuous tests for driving license applicants, and better enforcement and tougher punishments for those who violate the highway code, for example by driving in the opposite direction down one-way streets, and driving under the influence of narcotics or alcohol.

Vollpracht, who has spent the last three years studying Egypt's traffic and road problems, says most vehicles on the road are very old; he said the government should ban cars that are more than 20 years old.

Why are the railways dangerous?

"There is an urgent need for action on our country's deteriorating railroad system," Hamada Mansour, a railway expert and the former deputy chairman of Egypt's state-run National Railway Authority, told IRIN on the sidelines of the seminar. "Railways are neglected, trains are rarely maintained, and drivers do not receive any kind of training."

Some trains have not been replaced since 1985 - one of the reasons there are 550 train accidents every year, according to a recent Ministry of Transport report.

When a train crashed south of Cairo on 14 January, the co-driver told Al Nahar TV that drivers could not be blamed for accidents because “the trains are too old to work.”

Workers try to remove the wreckage of a train carriage that derailed south of Cairo on January 14 2013, killing 19 people and injuring tens of others 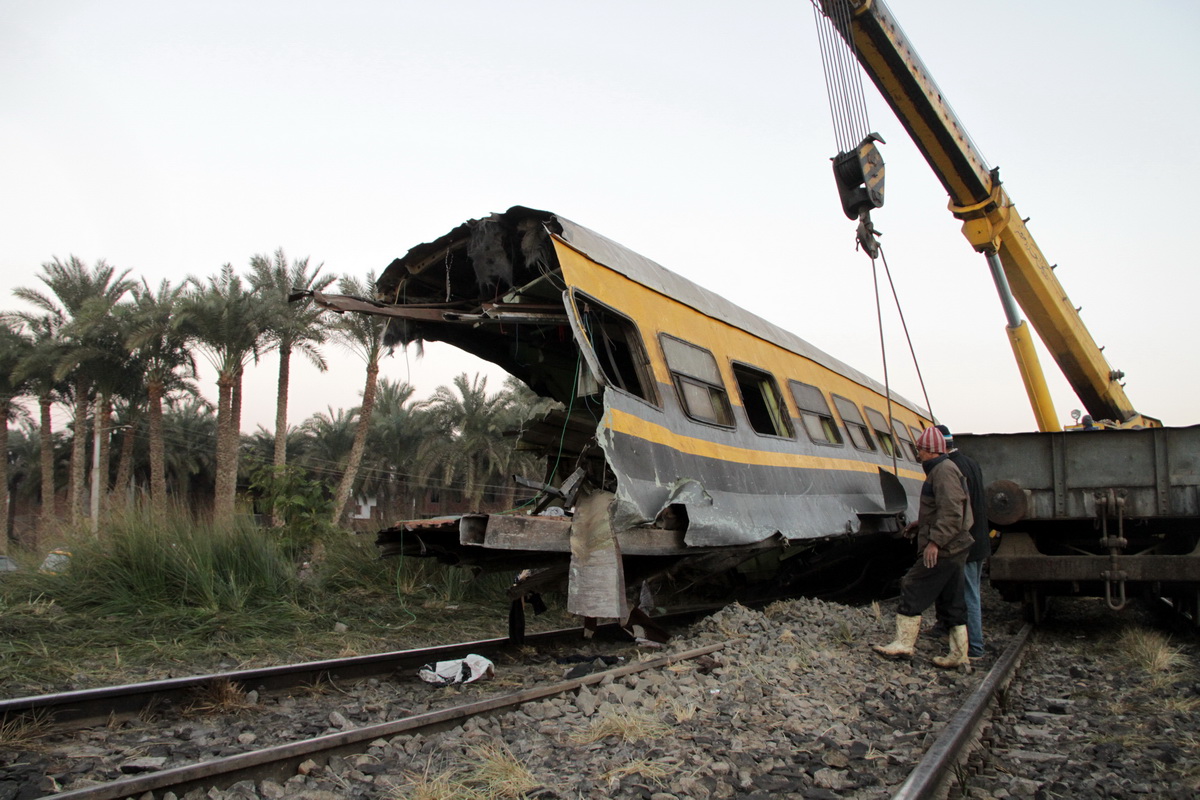 "Officials in the National Railway Authority still use specifications dating back to the 1960s in importing train locomotives," said Mansour.

“Egypt must pay attention to the human factor in crashes,” Vollpracht said. “Some drivers have to work extra hours and this results in a lack of driving wheel control on their part.” He said drivers should not be at the wheel for more than five hours per trip.

Are there too many level crossings?

Abdelatif, the transport minister, recently said almost 50 percent of railway accidents happen at level crossings: There are 1,261 along 9,560km of railway, according to the state-run National Transport Institute - a ratio some observers say is too high.

The Institute says only 333 of the crossings are automated, while the remainder are manned by staff who sometimes fall asleep or leave work before the end of their shift.

When a bus carrying children crashed into a train in November 2012 in a village near Asyut, 320km south of Cairo, media reported that the employee manning the crossing was asleep.

The Transport Ministry says 82 percent of railway lines rely on mechanical, as opposed to electronic, signals.

Abdelatif (Arabic) has also said that 80-85 percent of Egypt's 3,300 train carriages are in need of replacement.