Syrians should quickly resolve rising tensions between protesters and government forces to avoid their country descending into a civil war that would lead to widespread human suffering, a senior UN official warns.

“We are not in a civil war yet, but we will certainly be heading there unless something is done,” said UN humanitarian coordinator in Syria Ismail Ould Cheikh Ahmed. “I would have rated this scenario very low in March. Today, it is quite a possibility.”

Swept up in a wave of protests demanding greater political freedoms across the Arab world, Syrian protesters have seen a violent crackdown by the Syrian military and security services. The UN High Commissioner for Human Rights says Syrian military and security forces have killed at least 2,700 people; but activists and human rights groups put that number as high as 5,300. The government says many of those who died were members of the security forces, and Al Jazeera puts the number at 700.

“We are in a stalemate,” said Ould Cheikh Ahmed. “We are in a very difficult situation, where if things [continue] like this, we don’t have any light at the end of the tunnel,” he added, citing an “excessive use of force” by the government; the refusal by some parts of the opposition to negotiate; and increased violence in places like Homs.

While there was no humanitarian crisis in Syria yet, he said, “pockets of need” existed, especially among groups of people who were already vulnerable before the current crisis began. They include farmers who have been affected by drought since 2007, and Palestinian refugees, 60,000 of whom have been living below the poverty line.

“Even if we speak about a situation which is not a big humanitarian crisis today, we are expecting that to worsen in the coming weeks,” he told IRIN by telephone from the capital, Damascus.

Tens of thousands of people have been internally displaced during the conflict - albeit for short periods. Residents know when a military operation is coming to their area; pack up and go for a few days; and then come back when it is over.

“These people don’t settle in camps or open areas where you can see, count and support them,” Ould Cheikh Ahmed said. “They settle with relatives and become difficult to identify,” placing a burden on their host communities.

In the areas of Idlib and Jusr al-Shughour, he said, up to 50,000 people had to leave. They entered Turkey, camped out in mountainous areas or stayed with family elsewhere. Many of them have now returned to their homes.

According to the Turkish government, 18,439 Syrians have crossed the border to camps in the Turkish province of Hatay since the uprising began. After many voluntary returns, the number is now 7,553, though it rises and falls depending on military operations in the area. Another 522 Syrians have fled to Jordan since March. The Lebanese government said more than 6,500 Syrians fled to villages in northern Lebanon. According to the UN Refugee Agency (UNHCR) in Beirut, many have since returned, leaving 3,580 today. Some arrived injured and reported being shot at while attempting to flee Syria, the agency said in a May-July update.

In Lebanon, most of the displaced Syrians are hosted by local communities, “but the pressure on the local community is large and cannot continue unabated without the proper support of the international community,” UNHCR said.

There are other problems. During military operations, water, electricity and communications can be cut off for days at a time. Sometimes there is no flour in the shops. The UN said the army has taken over some schools, using them as barracks for their men.

"In Mouadamiya [a suburb of Damascus], we saw a demonstration of women who complained that most men in the place - the breadwinners - were killed or arrested."

Activists also talk of lack of access to health care.

“Revolutionaries do not take wounded to the hospitals, because the security [services] take them from the hospitals to the jails,” Omar Idliby, a Syrian activist who fled to Lebanon, told IRIN.

Human Rights Watch (HRW) documented one such case two weeks ago - when it said security forces forcibly removed 18 wounded people from a hospital in Homs.

According to Mousab Azzawi of the UK-based Syrian Observatory for Human Rights, 69 doctors have been arrested for trying to treat the injured either in their clinics, in private hospitals or in the streets. As a result, people have secretly set up small makeshift hospitals in their homes, Idlib said. “A lot of those who died did so because they couldn’t get to a hospital,” he added.

Medical volunteers with the International Committee of the Red Cross (ICRC) have come under attack more than once since the uprising began. One volunteer died on 15 September after his ambulance was caught in heavy gunfire during the evacuation of an injured person to a hospital in Homs - an incident that was condemned by the ICRC as “completely unacceptable”.

The situation has also affected the economy. Sanctions by the US and Europe have affected bank transactions - something which is now being felt on the street, while international banking institutions have reportedly stopped accepting US dollar payments from Syrian merchants.

Tourism has also been hit hard. Oil production, one of the main sources of foreign currency, has declined; and several investment projects are on hold.

While the government has introduced several economic measures to try to mitigate the impact - reportedly cutting the price of fuel, increasing salaries of government employees, increasing the minimum wage, promising more jobs, reducing income tax, cutting taxes on some foods and giving cash to poor families, it remains unclear if these measures have had much effect.

Thousands of subsistence farmers from the countryside who had been working in cities like Dera’a, have had to return home because of the insecurity, leaving their jobs behind. Others are unable to harvest crops because of the social unrest. Feed for livestock is hard to come by, and prices of food are increasing.

“In Mouadamiya [a suburb of Damascus], we saw a demonstration of women who complained that most men in the place - the breadwinners - were killed or arrested,” Ould Cheikh Ahmed said. “We cannot confirm or deny this, but for sure, the protection of civilians remains the most important pressing issue in the context of Syria presently.”

Protesters have called for international observers to help protect civilians, but so far, the majority have opposed any foreign military involvement - a move that would be “unquestionably disastrous”, according to the Brussels-based International Crisis Group.

Activists say they are struggling to maintain the peaceful nature of their demonstrations. In August, the Local Coordination Committees (LCC) of Syria, composed of young activists, released a statement begging their fellow Syrians not to use weapons.

“While we understand the motivation to take up arms or call for military intervention, we specifically reject this position as we find it unacceptable politically, nationally and ethically,” the LCC statement said. “Militarizing the revolution would minimize popular support and participation in the revolution.”

But after armed rebels overthrew leader Muammar Gaddafi in Libya, many Syrians are considering, even pushing for, this option. 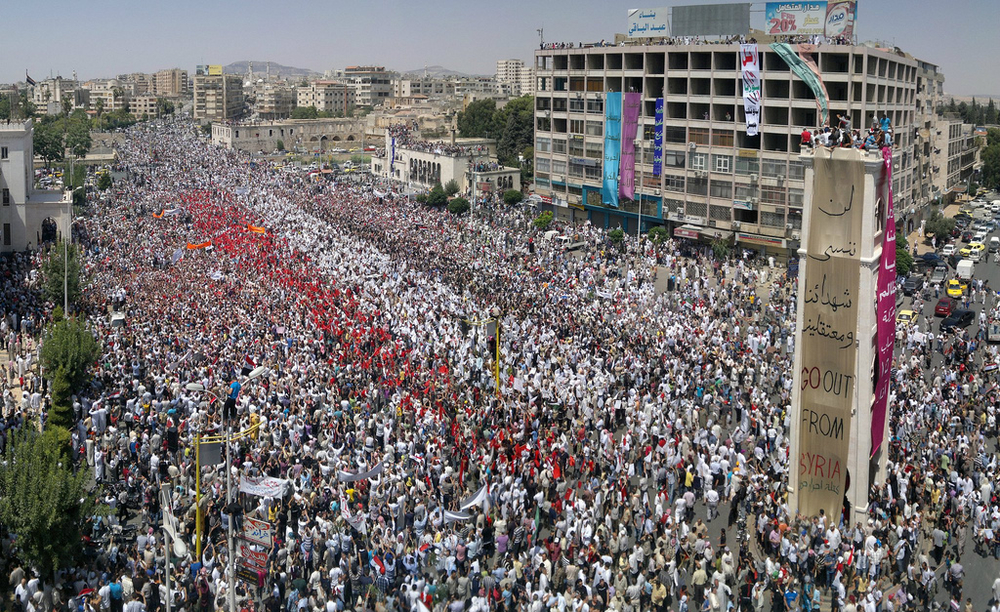 First Lieutenant Muhamad Abdelaziz Tlass of the 5th Special Forces, who deserted the army to join the opposition, told Al Jazeera: “It is time to arm the revolution, especially after Libya. Six months without results, and the number of dead..."

"In the end we cannot be free without weapons," another senior opposition leader in a suburb of Damascus told the news agency.

Analysts say there is already a significant armed element to the opposition.

“The major body of protest movement is of course people who want freedom and democracy. But within this big umbrella of forces, there are people willing to engage in military action now. And they have been,” one aid worker in Damascus told IRIN. “It is a combination of all kinds of people,” he said, including criminal trafficking gangs, religiously-affiliated “terrorists” from abroad, and people with existing vendettas against the army and security forces.

“We’re not talking about angels and devils,” the aid worker said. “Both sides are very difficult [and] are trying to gain control.”

Activists say soldiers who died were killed by security forces because they refused to shoot protesters - not by armed gangs, as the government alleges.

Individual soldiers who have defected have brought with them a very limited number of weapons. But in addition, “there are a lot of arms in Syria,” Jubin Goodarzi, a professor of international relations at Webster University in Geneva, told IRIN. “People have them in their houses. Some have used them in clashes with the government.”

“Some of that may be spontaneous, but the regime does have enemies inside and outside,” he added. “I wouldn’t be surprised if some of its foes - in Lebanon, Israel, the US - are trying to take advantage of the situation.” On the flip side, Iran, he said, was doing “everything it can” to help prop up al-Assad’s government, including providing riot gear and advice on how to monitor activity on the internet.

According to Khair El-Din Haseeb, chairman of the executive committee of the Beirut-based Centre for Arab Unity Studies, parts of the armed opposition are coming from Lebanon and Turkey. “There are countries outside Syria who are interested in making trouble for the Syrian regime,” he told IRIN.

Domestically, rising sectarian tensions are also increasing the risk of war. Al-Assad and the majority of the security services behind the crackdown belong to the minority Alawi sect of Islam, while most of the population (and the protesters) are Sunni.

“That is already a scary prospect,” said Timur Goksel, who was a senior adviser to the UN peacekeeping force in Lebanon (UNIFIL) for many years, before joining the American University of Beirut as an instructor on Middle East conflict.

Even Alawis who were not particularly fond of al-Assad are becoming more supportive of the government with every passing day, he said. “They say: ‘If the Sunnis take over, we are all going to be wiped out.’ They are seeing it as a threat to the existence of their community,” Goksel told IRIN.

Despite the increased polarization, protesters say they are well aware that the stakes are very high - higher than in other countries, like Libya, that have been engulfed by conflict in recent months - due to Syria’s strategic position in the region.

“If there is a civil war,” the rights activist Azzawi said, “the whole region will be burned out.”

* This report was amended on 26 September.