Hammered by four droughts in a row, as many as 17 million people are going hungry in three countries in the Horn of Africa, with aid agencies warning that the hardest-hit areas are threatened by famine.

In the arid pastoralist regions of southern Ethiopia, northern Kenya, and much of Somalia, the lack of water and pasture has killed millions of animals that herders rely on for their livelihoods. That has left households destitute, with deaths among the most vulnerable, especially young children.

Worse is on the way. The La Niña weather system that has caused an unprecedented four consecutive droughts across the region is still in effect. There is now a “concrete risk” that the October to December rains will fail once again – propelling the disaster to a whole new level.

“We must meet the current humanitarian needs now if we are to avert an even bigger crisis in six months' time,” Sean Granville-Ross, Africa regional director for the aid agency Mercy Corps, told The New Humanitarian.

The current response is not enough. The $4.4 billion UN appeal is “woefully” underfunded, according to the aid agency Oxfam. A separate donor pledge of $1.4 million made in April to cover the next six months has raised only $400 million in new money.

“It’s an indication of the multiple catastrophes around the world that are vying for the attention of the donors,” said Granville-Ross. “Back in February, we thought [the Horn of Africa] was gaining momentum, and then Ukraine came along.”

“We’re living with it again – even when we thought we’d learnt the lesson of how dangerous a delayed response can be.”

As with the Somalia famine of 2011/2012, when a slow-motion response cost 260,000 lives, there was early warning of this impending crisis, with alarm bells being rung as far back as 2020. But “we’re living with it again – even when we thought we’d leant the lesson of how dangerous a delayed response can be,” noted Jeremy Taylor, advocacy adviser for the Norwegian Refugee Council.

It’s not just drought that’s driving needs. Food prices have been rising around the globe since last year – the consequence of higher costs for fuel, fertiliser, and shipping. The war in Ukraine, which has blocked the export of millions of tons of wheat and maize from Black Sea ports, has driven an additional spike in cereal prices.

The cost of a typical food basket has risen by 66 percent in Ethiopia and 36 percent in Somalia. In the worst-affected parts of Kenya, the emergency sale of livestock means prices are at their lowest since 2011. In all three countries, women are bearing the brunt of the crisis – they are the last to eat in each household, and the first to be displaced. 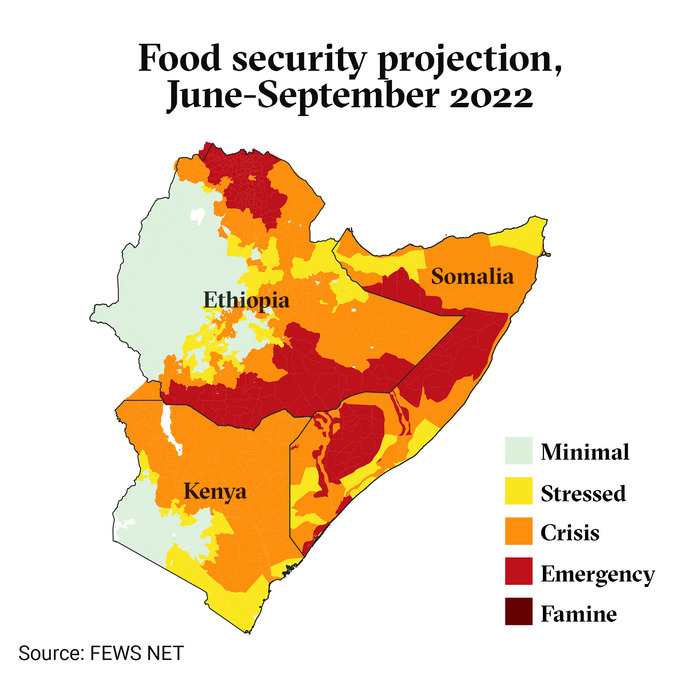 Conflict and political instability are exacerbating the impact of climate shocks in the region. In Somalia, the jihadist group al-Shabab controls much of the countryside and is hostile to Western aid agencies. Fear of falling foul of international anti-terror legislation acts as an additional barrier to foreign aid operations.

But there is “enough to do without getting close to al-Shabab areas”, said an aid worker, who asked not to be named due to the sensitivity of the issue. “That’s a reflection of both the scale of the needs, and the limitation of the response.”

Across the region, pastoralists who have lost their animals are heading to informal settlements on the outskirts of towns and cities. Without livestock to restart their lives, they become part of a precarious class of new urban poor.

More severe droughts are almost certain to continue scorching the region as a consequence of climate change. “Not only do we need to meet immediate needs, but to also strengthen communities' future resilience,” said Granville-Ross. “That’s where we need to have an urgent conversation with host governments, donors, and international organisations.”

The following is a snapshot of the critical needs affecting the Horn of Africa, as well as neighbouring Sudan and South Sudan, which are also facing large-scale food deficits.

What is happening? Six million people, 40 percent of the population, are “acutely food insecure”. That includes 81,000 people already at a “catastrophe” level of hunger, with a real risk of famine in multiple areas of the country this year. Yet the humanitarian response plan is only 18 percent funded.

Areas particularly badly affected include pastoralist regions in the northeast and the centre of the country, as well as the informal displacement camps around the capital, Mogadishu, and the towns of Baidoa in the southwest, and Dhusamareb in the centre. There has also been a sharp rise in child and adult mortality rates in the south, despite it being relatively accessible for aid deliveries.

More than 770,000 people have abandoned their homes in the current drought, looking for water and pasture for their animals, or help for themselves. That’s double the number displaced during the 2016/17 drought emergency, and could reach 1.4 million people in the next six months.

Numbers in need: 25.9 million (including the Tigray crisis)

Funded: Not yet updated

What is happening? Ethiopia is facing two food emergencies: One is the conflict in the north – which has left more than nine million people in Tigray, Afar, and Amhara in need. The other is the drought in the eastern and southern lowlands, affecting 6.8 million people.

A humanitarian ceasefire between the federal government and Tigray rebels agreed in March has not translated into the flood of food aid needed to ease “famine-like” conditions.

Meanwhile, the arid regions of Somali, Oromia, and Southern Nations, Nationalities and Peoples'  (SNNP) have struggled with two years of back-to-back droughts that have left pasture conditions among the driest on record.

An estimated 2.5 million livestock died between late 2021 and mid-May 2022. It’s not only a significant knock to household prosperity, it also removes milk – a key source of nutrition for children – from people’s diets.

There has also been a drastic fall in terms of trade for remaining animals. The sale of a goat last year would have covered a family’s food needs for 23 days – now it’s down to just six days.

What is happening? More than four million people – a quarter of the population in the Arid and Semi-Arid Lands (ASEL) of north and eastern Kenya – are acutely food insecure. Numbers in need could rise to five million as conditions deteriorate.

Staple food prices have continued to rise, with maize 12 to 46 percent above the five-year average. Mass screening by UNICEF in Marsabit county in February found a child malnutrition rate of 23 percent – well above the 15 percent standard emergency threshold. With an anticipated failed harvest in June, and worsening pasture conditions for livestock, hunger levels are set to deepen.

As is also the case in Ethiopia, the government's welfare safety net programme has been overwhelmed by the scale of the crisis. But political attention has also wandered, diverted by upcoming elections in August this year.

What is happening? More than 70 percent of South Sudanese are dependent on food aid – the consequence of conflict, under development, and a poorly performing government. Three consecutive years of floods have also eroded people’s ability to produce or purchase food.

As a result, three million people are facing a food emergency. In eight counties, households are already at “catastrophe” levels of hunger, with a strong likelihood of famine in some of the most vulnerable areas.

The most dangerous period will be July to August, coinciding with the traditional lean season and the height of the rainy season.

What is happening? Sudan is struggling with the convergence of conflict, economic and political crisis, and a poor harvest, with as many as 18 million people – 40 percent of the population – projected to be short of food by September.

In April, staple food prices increased on average by 10 to 15 percent compared to March – and up 200 to 250 percent more than in 2021. Devaluation of the local currency, and higher transportation costs, helped fuel inflation. Sudan is also particularly dependent on now-blocked wheat imports from the Black Sea region.

The numbers in need, and the appeal and funding information, were taken from figures provided by the UN’s emergency aid coordination body, OCHA.

*This story was updated on 1 June after new information was published by FEWS NET, a famine monitoring organisation funded and managed by USAID, the US government’s aid department.