This article is part of our in-depth coverage. Read more like this...
BOGOTÁ

Neirys Brazon scrubs her children’s garments over a dirty bucket of water, hanging them on a football net behind her to dry. The ground is soggy and reeks of sewage, but it’s home for now.

A 25-year-old from Venezuela, Brazon arrived in the Colombian capital two months ago along with 14 other family members, including three children. Penniless, she took refuge at a makeshift camp outside Bogotá’s main bus terminal that became known locally as “El Bosque” (“The Forest”), along with some 400 other Venezuelans.

After mounting pressure, city officials decided to relocate the migrants at El Bosque to a formalised camp. On 13 November, they were taken to a football pitch in Bogotá containing 78 tents.

The government-run camp, the first of its kind in Colombia, is set to close on 15 January, and the migrants, who have signed an agreement, will have to vacate the premises. Officials say they hope by then the Venezuelans will have established themselves in the city, but there is also the risk they could return to makeshift camps.

"This is not a refugee camp; it is a humanitarian camp,” stressed María Angélica Trujillo of Bogotá’s Department of Social Inclusion, who is in charge of managing the camp. “It is so they can feel safe and search for a support network in the city or continue their journey to other destinations."

The temporary nature of the camp makes sense, according to Jozef Merkx, representative in Colombia for the UN’s refugee agency, UNHCR.

“The establishment of these centres should be avoided if possible,” said Merkx. “However, sometimes they are a last resort to attend [to] the humanitarian needs of refugees and migrants.”

The camp may only be temporary, but it is also a sign of how far and how fast oil-rich Venezuela has fallen. As recently as a decade ago Venezuela was one of the richest countries in the region, playing host itself to more than a quarter of a million Colombians fleeing war and persecution.

In a role reversal, from 2017 an estimated one million people fled the other way in just 15 months to escape a crippling economic meltdown, political persecution, and extreme medicine and food shortages in Venezuela. A million more Venezuelans have left to other nearby countries like Ecuador, Peru, and Brazil in search of opportunities and to help their families back home.

The UN declared on 4 December that it is seeking $738 million for 2019 to help Colombia and other neighbouring countries cope with the influx of Venezuelans – the first time Venezuela’s crisis has featured in the UN’s annual humanitarian appeals.

“The phenomenon of Venezuelan migration is not just a Colombian issue, it is a regional issue and even a global one,” said Christian Kruger, head of the Colombian government’s migration department.

Only for the few

Colombia, which has borne the biggest burden of Venezuela’s mass exodus, had managed to avoid establishing migrant camps up until now, amid concerns they could encourage an even greater influx.

An estimated 300,000 Venezuelans have come to Bogotá – a city of nine million inhabitants – with hundreds living homeless on the streets. Many face danger in various forms of exploitation.

The new football pitch camp now has 322 migrants filling 422 of the allocated spaces, including 71 children – 29 of them under six years olds – and 21 pregnant women, according to the Social Integration Department’s statistics.

Merkx urged the Colombian government to look after those most at risk first. “Special attention should be given to persons with specific protection needs, particularly the child population and irregular [undocumented] Venezuelans who are vulnerable to exploitation,” he said.

Many other Venezuelans have tried to get access to the camp, but it was only provided for the original 422 of El Bosque.

Some migrants said they were pleased with the location of the temporary camp. It has more resources and it is safer than the bus terminal camp, they said. Others complained of poor conditions after recent heavy rainfall and a lack of provisions being provided.

“When it rains it smells like chicken faeces,” said Eloy Silva, 22, from inside his yellow tent, where he had stowed his possessions on top of plastic sheets. 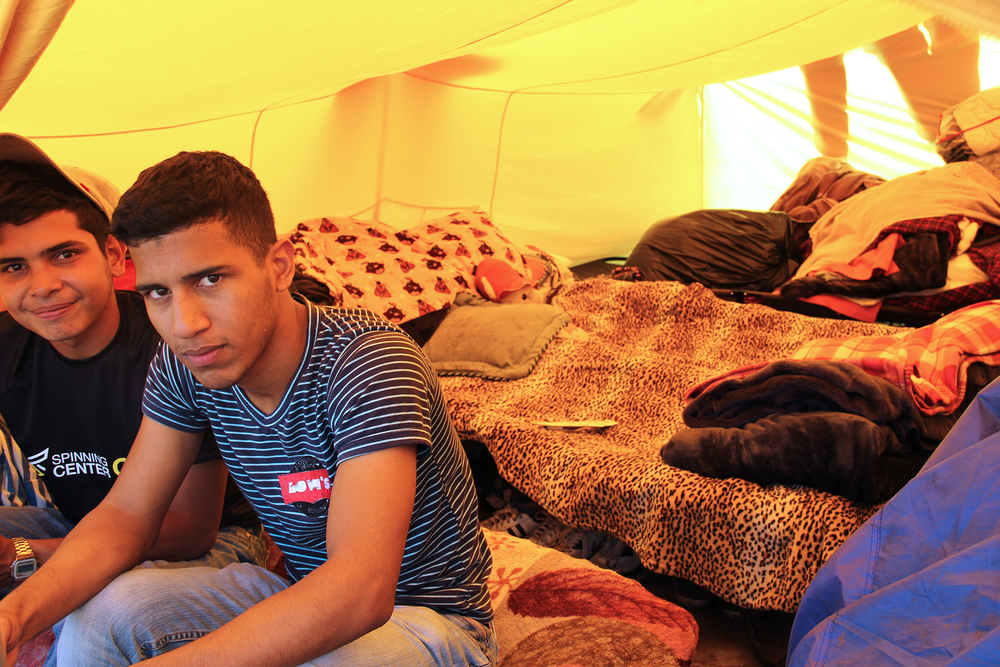 Steven Grattan/IRIN
Eloy Silva in his tent at the camp.

When IRIN visited the camp late last month there was evidence of attempts to dig irrigation channels to deal with flooding, but most of the ground had turned into a foul smelling mud anyway.

Ronald Rodriguez, director of Rosario University’s Venezuelan Observatory – an academic centre that analyses the crisis – said the month of January was going to be hard for migrants who are more used to a Caribbean climate, as temperatures drop in Bogotá and they live in tents with insufficient supplies.

“To put tents in a football pitch, taking into account that we are going into a month where temperatures are going down, is going to cause problems,” Rodriguez said.

Neotomarlis Silva, 24, fled to Colombia in search of opportunities to provide for her family back home.

“I was working for nothing,” she said. “Things got really difficult. My parents live from day to day just to be able to afford a plate of rice.”

After a turbulent journey, she said she had been robbed on the Colombian border but made it the 550 kilometres to Bogotá, where, penniless, she took shelter in the bus terminal camp.

“The first days were horrible. I woke up crying in the middle of the night. There were a lot of awful Venezuelans there – they fought a lot and there were stabbings,” she said, adding that this new camp has more facilities, like toilets, and feels safer.

One downside of the formalised camp, residents said, is that local Colombians can no longer provide direct support to the migrants, due to tight security.

“The food they are giving us in here is really bad. It is making people sick,” said 45-year-old former builder Alexis Lopez, adding that at the bus terminal local volunteers would bring food and supplies. “They have made it really difficult now to come in and out,” he said.

There have already been a variety of security issues within the football pitch camp, including riots between the migrants. Sixteen people have also been removed and deported back to Venezuela for the use of weapons and drugs.

“The camp does not have any problems with orderliness,” insisted Trujillo. “We have had some isolated events by people who have now been removed and extradited back to Venezuela.”

At the end of November it was confirmed that Venezuela itself will also receive UN humanitarian aid for the first time, with $9 million from the Central Emergency Response Fund to be split between five UN agencies to assist programmes ranging from child malnutrition to gender-based violence.

Venezuelan President Nicolas Máduro has refused any international assistance to date and his government has repeatedly insisted that there is no humanitarian crisis in the country.

Inside Venezuela, however, people are reportedly dying from illnesses like cancer and HIV – and even minor illnesses like diarrhoea and bacterial infections – because of the lack of access to basic medication. Electricity and water supplies in hospitals are scarce and long absent diseases, like measles and diphtheria, are on the rise and spreading into neighbouring countries. 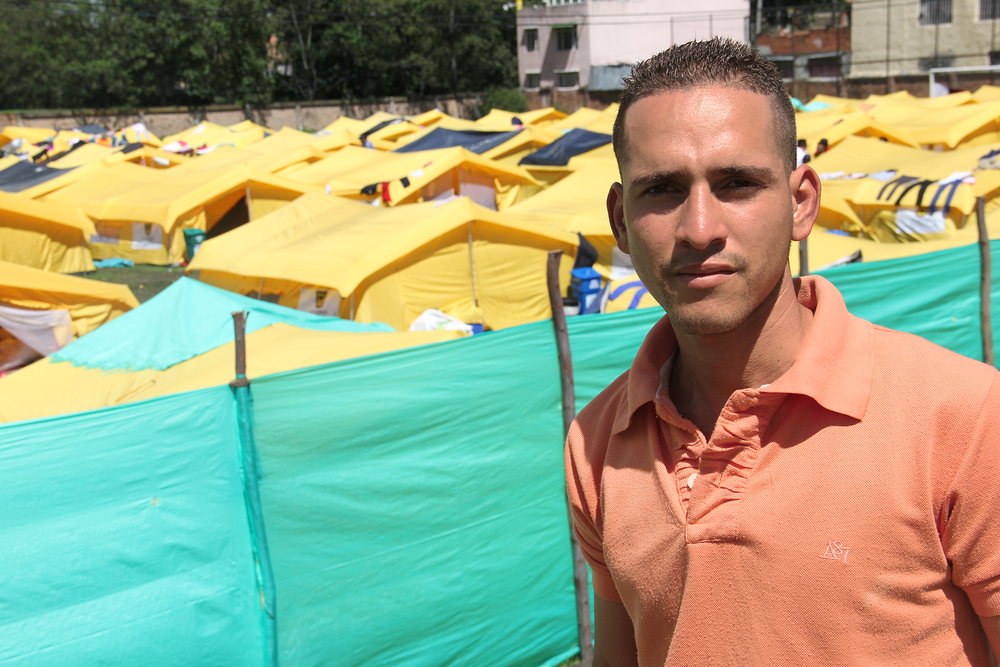 Jesus Gomez, 27, left his wife and child three months ago back in his arid hometown in Venezuela’s northwestern state of Yaracuy, where he worked as a fruit packer.

His shoes were soaked through from the soggy ground in the camp.

“We need help getting work here,” he said. “All we want is to send money back to support our families in Venezuela.”

Some of the camp’s migrants have been able to find employment in Bogotá – where job opportunities are scarce due to fierce competition and overpopulation. They work as cleaners, hairdressers, and street vendors, but many complain of difficulty in obtaining formal work permits because they lack the necessary Venezuelan documents. For years now, Venezuela has made it nearly impossible for their citizens to obtain passports and identification cards.

Come 15 January, the migrants IRIN spoke to were unsure what life would bring when the camp closes, but they did say they wouldn’t be returning to Venezuela. “We had to spend and sacrifice a lot to get here; there is no way we will go back,” said Brazon.