Donate
First in a two-part series exploring how the Kurdish region of northern Iraq has evolved since Kurds voted overwhelmingly for independence in 2017.
ERBIL, Iraq

Two years ago, Iraqi Kurds overwhelmingly voted ‘yes’ in a landmark independence referendum. But the bid was carried out against the wishes of Iraq’s central government, neighbouring countries, and most of the international community.

Instead of ushering in nascent independence, the referendum resulted in the semi-autonomous Kurdistan Regional Government losing most of the areas in the north also claimed by the Iraqi government – some 40 percent of the KRG’s territory.

Baghdad’s tough reaction to the 25 September 2017 vote, and the subsequent economic downturn, have dealt Kurdish nationalism a serious blow.

For now, the elusive Kurdish state – so tantalisingly within reach two years ago – has resumed the status of a more distant future hope and dream. And for most Iraqi Kurds, it must take a back seat to the more pressing need of putting food on the family table.

Iraq as a whole is still emerging, slowly, from several years of foreign occupation and fighting against so-called Islamic State.

But the fact that nearly 57 percent of the 1.2 million people still displaced from the war live in the KRG’s four remaining undisputed governorates is an indication of the oversized burden the north, and the Iraqi Kurds, had to bear.

After the vote, the KRG’s economy took a nosedive, as land borders were temporarily closed and businesses struggled to import and export goods.

“The financial situation was not good even before the referendum because the budget had already stopped,” said Khazem Farouq, from the New Generation Party, which holds eight seats in the KRG parliament. “The economy, job opportunities, and construction projects were already frozen but, once the referendum took place, the financial situation worsened.”

Even though the economy is starting to rebound, unemployment remains high and the pre-vote optimism once felt across Kurdish parts of northern Iraq has faded.

Where the red, white, and green stripes of the Kurdish flag – with its central yellow sun – were ubiquitous two years ago in areas of KRG control, these days the banner flutters mainly over checkpoints and government institutions.

In 2017, some dreamed independence might be the reward for the hefty price Kurds paid in defeating IS. But for many, especially young people struggling to enter the job market, the referendum now feels like an unnecessary distraction.

“The Kurdish flag used to be something really important – we even have a Kurdish flag day,” said Sanger, a 25-year-old who has had trouble finding work in the KRG-run city of Sulaymaniyah since graduating with a degree in civil engineering.

For Sanger, the two main political parties in the region – the Kurdistan Democratic Party and the Patriotic Union of Kurdistan – have both failed to improve basic infrastructure or support young Kurds with job opportunities.

“[The flag is] still important, but not like before,” he said. “It’s like this across Kurdistan. The Kurdish parties made us not believe in the flag anymore.” 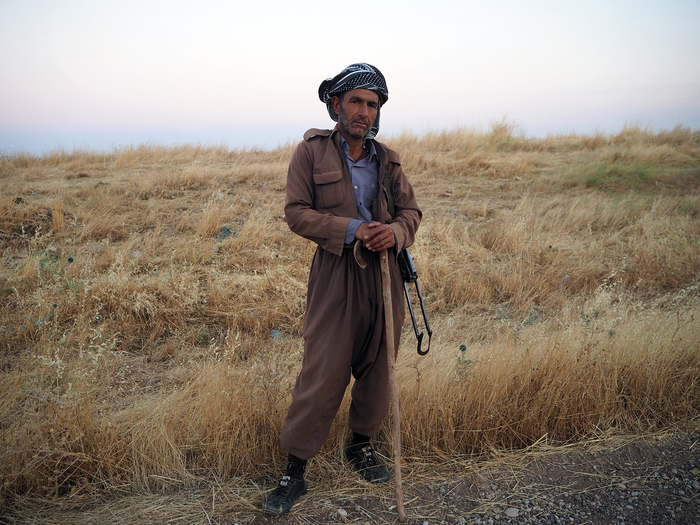 Tom Westcott/TNH
Kurdish herder Haji Antdar says his business took a hit after the vote but has since rebounded. He wishes the KRG provided more support for farmers but still supports independence: “It would be much better for us to be governed by a Kurd than an Arab."

In the run-up to the vote, Iraq’s then-prime minister, Haider al-Abadi, threatened that holding the referendum would have serious consequences.

But the KRG’s president at the time, Masoud Barzani, insisted the Kurds had a right to self-determination, even though the vote was non-binding. “We have our geography, land, and culture,” he said in 2017. “We have our own language. We refuse to be subordinates.”

After the vote, which saw a reported 72 percent turnout and 92 percent support for independence, Baghdad mobilised its troops, ordering a ban on flights in and out of KRG airports (since lifted), and took control of most of the “disputed territories”.

The KRG had controlled much of this territory – including the predominantly Yazidi area of Sinjar and multi-ethnic and oil-rich Kirkuk province – since Saddam Hussein’s fall in 2003, expanding its reach as its military forces, the Peshmerga, joined the fight against IS in 2014.

Today, most of this disputed land remains in the hands of the central government, even though Kurdish officials insist they will fight to get it back. 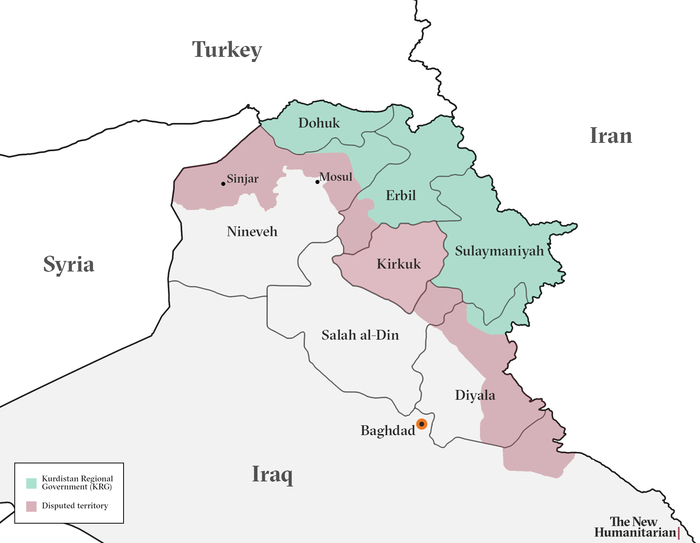 Sheikh Jafar Mustafa, who commands a Peshmerga unit based in Sulaymaniyah, told The New Humanitarian it’s “not about the Kirkuk oil but the fact that Kirkuk is a Kurdish city and must stay part of Kurdistan”.

Iraqi officials, whose security forces now patrol Kirkuk and its oil fields, say they have no intention of handing anything back to the KRG.

As for those who live there – including many long-marginalised minority groups like Turkmen, Yazidis, and Christians – the response to the shift in power has been mixed.

Ahmed, an Arab-Turkmen engineer in Kirkuk who asked that only his first name be published, told TNH that things had generally improved since the change of power weeks after the referendum.

“Before,” he said, “there were many Kurdish militias who treated Arabs and Turkmen very badly,” adding that Kurdish leaders had also given preferential treatment to Kurdish officials and businesses.

But Riyaz Sarikahya, the head of Turkmenali, Iraq’s largest Turkmen political party, said history – to some extent – was repeating itself. “Already many leadership positions in Kirkuk have been taken by Arabs,” he said. “Marginalisation is happening again.”

And, in Sinjar – a rural part of Nineveh province made infamous by 2014 IS attacks on the Yazidi minority there – residents say they still haven’t seen enough reconstruction help from Baghdad, following years of neglect by the KRG government.

Most Yazidis, who were always divided on the independence question, have not returned to Sinjar after fleeing the extremist group. Some say they are kept away by a lack of jobs, resources, and basic infrastructure; others cite fear as the reason.

Haider Shesho, commander of the Ezidkhan Forces – a Yazidi branch of the Peshmerga – has some sympathy for this point of view, saying there are multiple power structures in Sinjar, including one Baghdad-appointed mayor in town and a second one in exile.

“Services for ordinary people cannot properly be brought back under these conditions and, without services, people cannot return,” Shesho said. “There are multiple different security forces operating here. They don’t coordinate, and run different checkpoints, which also makes people very afraid of returning.”

As well as losing a large chunk of its territory, the KRG lost one crucial revenue source after the vote: Kirkuk’s lucrative oil fields.

The territory’s economy has long been dependent on oil sales and its 17 percent share of Iraq’s national budget. The latter has been on hold since 2013 because the KRG refused to hand over revenue from independently-brokered oil export deals, many of which go through a pipeline to Turkey that was completed in 2014.

The Baghdad-Erbil relationship has since improved. The Iraqi government has now resumed paying Erbil a reduced 12.67 percent share of Iraq’s budget – including funds to pay civil servants – on the condition that the KRG send 250,000 barrels of oil per day.

But the KRG has not yet fulfilled its part of the deal.

KRG spokesman Jutyar Adil said in August that it was prepared to hand over the oil but that the value of the amount slashed from its budget far exceeded this. He added that negotiations were ongoing with Baghdad.

For some in the business community, like Majid Suliman Ismael, director of plastic materials company Dilnal, based in the KRG city of Zakho, things are getting better. 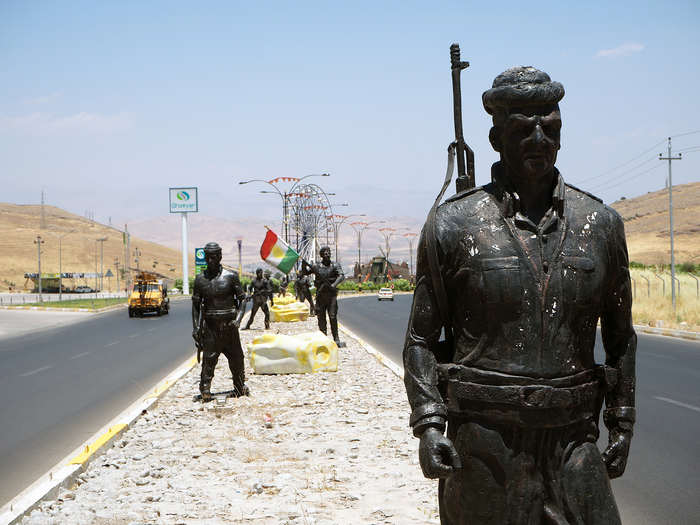 Tom Westcott/TNH
Peshmerga statues in the middle of the highway leading to the KRG city of Zakho.

“The situation is starting to improve now, and construction projects are restarting,” Suliman said.

Not so, however, for Samir, who has a shop near Erbil’s old citadel, and preferred his last name not be published. He said buying new stock from southern Iraq was harder than it had been before the vote, and though business had picked up somewhat since then, it was not enough.

Standing in front of shelves piled high with the Kurdistan mementoes he sells – most featuring the striped flag with its central sun – he said the referendum “was our right and our destiny, but the timing was really bad”.

Although he believed the result had taken the Kurds back to a similar position as they were in the 1990s, Samir remained “hopeful and optimistic” that, in the future, “there will be an independent Kurdistan”.

The dream of Kurdistan

People like Samir are not the only ones who retain some positivity about the referendum, despite the setbacks. Officials from the ruling Kurdish Democratic Party are adamant it was a success.

Major General Abubaker Ahmed Mohamed, director general of information at the Peshmerga Ministry in Erbil, said the vote was “very successful”, explaining: “It didn’t fail because of people’s votes but only because of the agendas of our neighbouring countries.”

He said the border closures and other punitive measures from Baghdad had been expected, and overall he described the vote as “a message from a Kurdish nation… that we deserve to be a country.

“The referendum doesn’t mean independence right away, but when the right time comes we can use it,” he said. “These votes will stay as a weapon for us that we can always use.”

Not everyone has that kind of hope.

Lawyer and former KRG MP Talar Latif Mohamed, who stood against the vote because it was not legally binding, said it had also alienated international partners.

“Before, we had so many allies, including the UK and US, but, since the referendum – which they didn’t approve of or support – they’ve grown cold towards us, which has created tensions,” she said. “We’ve first focused on trying to fix things with Baghdad, and then we’ll try and fix things with our neighbouring countries.”

Ordinary Kurds still speak with determination and dignity about a future independent Kurdish state, even if the patriotic fervour that blossomed in the lead-up to the referendum is no longer around.

That may be especially true for Kurds from other countries who long lived (and fought) in Iraq, most of whom couldn’t vote in September 2017 but who believe in a Kurdistan that could someday include Kurds from across the region. 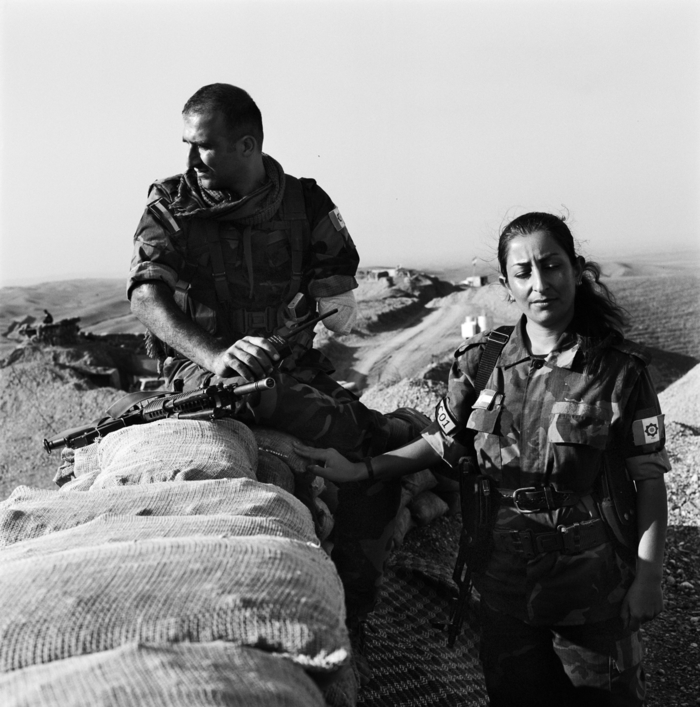 Katharine Cooper/TNH
Iranian Peshmerga Helo Remshti and Zohre Rostami on the front lines of the fight against IS in 2015. 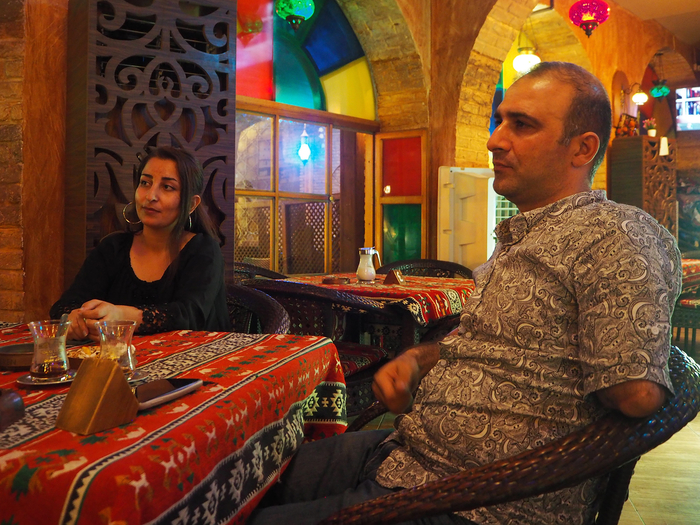 Tom Westcott/TNH
Now left in a precarious financial position, they say they still believe in an independent Kurdish state.

Helo Remshti, 36, and his wife Zohre Rostami, 28, are Iranian Kurds who spent 16 years with the Peshmerga. The last five years were on the front lines – often without payment – first against IS and then against Iraqi government forces when they came north.

Injured five times, including losing an arm, Remshti, a mine disposal expert, was surprised when the KRG did not pitch in to help him.

Now reduced to stacking shelves or other menial labour for a daily wage of 5,000-10,000 Iraqi dinar ($4.20-$8.40), Remshti is stateless and can’t return to his native Iran – a fate he shares with many other Kurds from neighbouring countries who came to fight for the Kurdish cause.

Remshti, now living in Erbil, is desperate to leave Kurdistan and make a life for his family in the West. But even so, he won’t let go of the dream of Kurdish independence.

“I still believe in the Kurdish cause and always will, even if I’m the last man standing,” he said. “I still believe, and in the future I will make my sons and grandsons fight for an independent Kurdistan.”

(TOP PHOTO: Before the referendum, Kurdish patriotism ran high and thousands attended a pro-independence rally in Erbil in September 2017.)