Nearly five years since the so-called Islamic State came to Iraq’s Sinjar, killing and abducting thousands and forcing tens of thousands more into flight, many Yazidis are struggling to deal with the psychological aftermath of what a UN commission has deemed genocide.

A growing suicide rate is one sign of how difficult the community – whose historical homeland is in northern Iraq – is finding it to rebuild after a horrific recent past.

Since the start of April, when the medical charity Médecins Sans Frontières began counting, it has recorded the suicide of 20 young Yazidis living near Sinjar mountain, which thousands of people climbed to escape IS in August 2014, and where some 16,000 people still live. The youngest death was a 13-year-old girl, the oldest a 30-year-old woman.

“Suicide is a big problem, and we started seeing a severe increase in April,” said Elise Loyens, MSF’s medical team leader in the Sinjar town of Sinouni, where the group supports a hospital run by the Iraqi government’s department of health. “We were appalled by the numbers and severity of methods and attempts, including women who set themselves on fire.”

MSF is not the only NGO trying to tackle the psychological and psychiatric needs of Yazidis in the area, but it does have the largest footprint. It is overstretched, due to both the high demand for its services and the difficulty of finding trained mental health professionals in a country that has long had a shortage of psychologists and psychiatrists.

And that’s just in Sinjar district, which has an estimated population of 90,000, down from more than 200,000 before the war. Hundreds of thousands of Yazidis remain displaced elsewhere in Iraq – either unwilling or unable to return to their homes – and many of them need treatment too, as they cope with a violent past and what some see as a bleak future.

Both healthcare providers and patients say there isn’t enough help to meet the massive mental health needs in the Yazidi community.

“It’s not a small thing that happened to us. We were children. We were kidnapped and kept from our families for four years.”

Sherihan Ali, 20, was sold multiple times into slavery and made to endure sexual servitude to IS members and later to extremists from another group.

“It’s not a small thing that happened to us. We were children. We were kidnapped and kept from our families for four years,” she said. “We’re scared here. We still have fears and we need treatment, especially psychological treatment, because we were raped many times and our condition is not good at all.”

Ali returned to Sinouni last April, weighing just 28 kilogrammes. She said the only help she received was one month in a medical centre in Sulaymaniyah province, where treatment mainly focused on her physical well-being.

Shaima Ali, 22, an assistant midwife in Sinouni, says she and many others in her community are worried about what’s to come. “Before IS, I had hopes and dreams, but now; nothing,” she said. “I never think about the future. We just live in the present and try to get through the days.”

Professor Ilham Kizilhan, dean of the Institute of Psychotherapy and Psychotraumatology in Dohuk – a province in Kurdish-controlled northern Iraq where many Yazidis fled to and now remain – is also concerned, but about what might happen if the wider mental health needs of the Yazidi community remain unmet.

“Trauma could move into ‘chronic disease’, where people can no longer function,” Kizilhan said. “[This could] impact families and society, and could lead to trans-generational trauma, where trauma symptoms will be passed onto future generations.”

Treating everyone ‘an impossible task’

Almost every Yazidi family has been impacted, in one way or another, by IS persecution. Many lost multiple family members, and those who did not still had to flee their homes, often losing all their possessions.

According to the department of health in Dohuk, 620,000 members of the minority group remain away from home. The UN’s latest figures, which do not distinguish by ethnicity, show that 296,000 displaced people are originally from Sinjar; that’s 18 percent of Iraq’s total displaced population of 1.6 million.

“If a population faces a trauma like genocide, 50 percent will be traumatised and at least 30 percent of these will need clinical help,” said Kizilhan, citing studies. Treating everyone, he said, is “an impossible task”.

That’s one of the reasons Kizilhan’s institute was opened in 2017 – funded by the German government to teach a new generation of Iraqi psychiatrists. “We cannot provide psychotherapy for 300,000 people, so our job is to train,” the professor explained.

MSF’s Loyens pointed out that not all psychological problems Yazidis face are directly related to IS.

The UN’s migration agency, IOM, raised the alarm about suicides in the community back in 2011, when women made up more than half of the deaths. Suspected causes included cultural issues, notably disapproval of marriage outside of the faith, as well as economic concerns like the high cost of living.

These days, Loyens said, there’s a feeling of hopelessness for both men and women.

“Most mental health presentations are related to loss; the loss of family members is a huge issue, and that sense of loss is immense, but also other losses including homes and livelihoods,” she explained. “Men suffer a lot as they have lost all economic means, they don’t know how to get these back, and they’re providers to huge families.”

According to local pharmacist Mourad Khro Mourad, six international aid groups provide some sort of mental healthcare in Sinjar district, but MSF’s project is by far the largest. Its staff are currently seeing 200 patients, and there’s a 50-strong waiting list. With one psychiatrist and one psychologist, both expats, the programme relies heavily on local staff with only basic training.

Treatment is being held back by limited human resources.

Iraq’s handful of professional psychologists and psychiatrists appear loath to work in Sinouni, a remote northern town only 20 kilometres from the Syrian border. Even at a mental health treatment centre in Mosul – a major city in the north – no one has applied for one government-funded psychiatrist role for over a year. 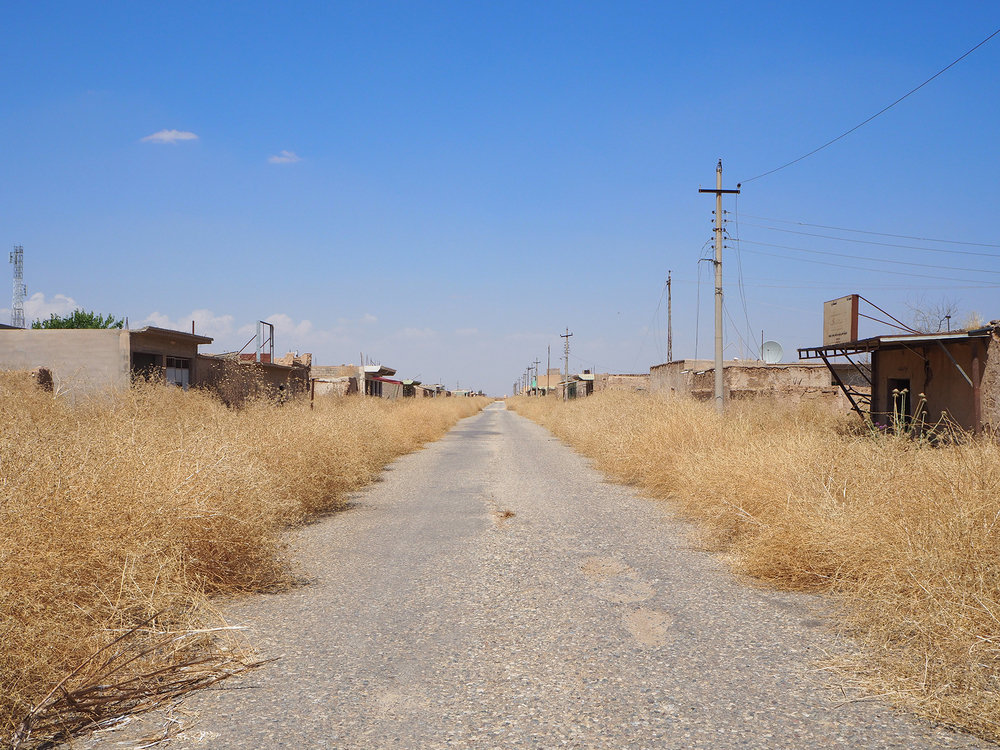 Tom Westcott/TNH
Many villages in Sinjar remain deserted, with limited security and no basic services.

Gradually, word is spreading, with more people coming to the hospital and clinic saying they think they need help. For many, though, these services remain hard to access, and there are no official permanent mental health services in Sinjar town.

‘They lost their identity’

Among the most profoundly traumatised are those who survived IS enslavement, many of whom have still not gone back to Sinjar or its surroundings.

Dohuk’s department of health founded an outpatient treatment centre for survivors in September 2014, when the first Yazidi woman escaped from IS. Mostly treating patients aged between 15 and 25 years old, it has seen girls as young as nine and women as old as 60.

“They’re complicated cases, having experienced multiple traumas and losses at a young age. Forced to convert, pray and change their names, and subjected to sexual enslavement, they were [mentally] destroyed so badly they lost their identity,” said the director general of the health department, psychiatrist Dr. Nezar Ismet Taib, adding that suicidal thoughts were common among survivors.

As IS began to collapse and more women escaped, the centre quickly became overwhelmed. “We didn’t have enough resources, psychiatrists or psychotherapists, which is why we asked for outside help and started the institute to train new people,” Taib said, adding that 28 qualified psychotherapists will graduate from the Dohuk institute next year. “Support is coming, but it has needed time.”

The Dohuk centre has treated 1,400 survivors to date, including 700 current patients, but this represents less than half of the 3,476 Yazidis who have so far returned from IS captivity, according to the Kurdistan Regional Government’s Office of Kidnapped Yazidis.

For other displaced Yazidis, including those who were not enslaved by IS but still need help, Kizilhan said various NGOs offer support, but much of it is short-term, while many people need prolonged, professional care. Psychiatrists and local volunteers also pointed to other factors that could contribute to (or hinder) successful treatment, saying more permanent housing and jobs were needed to help address the mental healthcare crisis.

But sometimes even limited help can provide a lifeline.

“If I hadn’t had this help after I came back, I would have completely lost my mind.”

Tarko, a 30-year-old mother of five from Sinouni who asked that her full name not be published, said that without the assistance she receives, she wouldn’t be able to afford to feed, clothe, or educate her children.

After she and her three daughters were held captive by IS in Iraq and Syria for three years, Tarko was rescued in 2017 when the part of Syria where they were kept was recaptured by Syrian forces. Since her return, she was reunited with her husband and gave birth to twin boys.

She has not gone back home, but instead lives in a tent in an informal roadside settlement in Dohuk province. She sees a psychologist every three months and attends regular group survivor meetings. Her oldest daughter, aged 10, also met with a psychologist for four months.

Tarko said she relied heavily on this aid and a network of other survivors, especially now, after her application for asylum in France was just rejected: “If I hadn’t had this help after I came back, I would have completely lost my mind.”

(TOP PHOTO: Sherihan Ali, who weighed only 28 kilogrammes when she first escaped captivity, said most of the treatment she received focused on her physical, rather than mental, well-being.)