In the wake of a disaster or even a sudden crisis like last weekend’s extremist attacks on London Bridge, the first place many of us turn for information and reassurance about the safety of our loved ones is social media. While cell phone towers can quickly become overwhelmed for voice calls, it’s often still possible to update your Facebook status or mark yourself as “safe” using Facebook’s Safety Check feature.

But until now, that information has been of little use to those trying to respond. Other than using hashtags to trawl through thousands of individual Twitter and Facebook posts, there has been no way to use social media to rapidly form an accurate picture of where a disaster has hit, how many people have been affected, and where they are fleeing to.

That could change with the launch on Wednesday of Facebook’s “disaster maps”.

What are disaster maps?

The initiative – awaiting its first live event – will use aggregated and anonymised Facebook user data to produce three different kinds of maps: where people are checking in as safe; where populations are before, during, and after a natural disaster; and where people are moving to in the hours after disaster strikes. The mapping relies largely on Facebook users on mobile devices who have their location settings turned on. Sample maps issued by Facebook show the movement of people away from forest fires and an earthquake, and the places they congregated. They can also show where people are compared to a normal day and, critically, can update in near real time.

Maps based on the same concept have been produced from mobile phone company data by analyst FlowMinder. In Nepal, for example, the maps were able to provide clues as to where people dispersed after the 2015 earthquake. However, the sharing and processing of mobile phone data has not approached real time.

According to Molly Jackman, a public policy research manager with Facebook, the new maps have been in development for the past year and are the outcome of extensive discussions with humanitarian organisations. “They helped us identify the data that would be most helpful for them,” said Jackman, speaking to IRIN over the phone from Facebook’s Menlo Park headquarters. “A lot of the conversation started with Safety Check; at first they just asked us to aggregate that data. The challenge we quickly realised is that a lot of people may not be looking at their phones or checking in as safe. So we wanted to dig a layer deeper.” 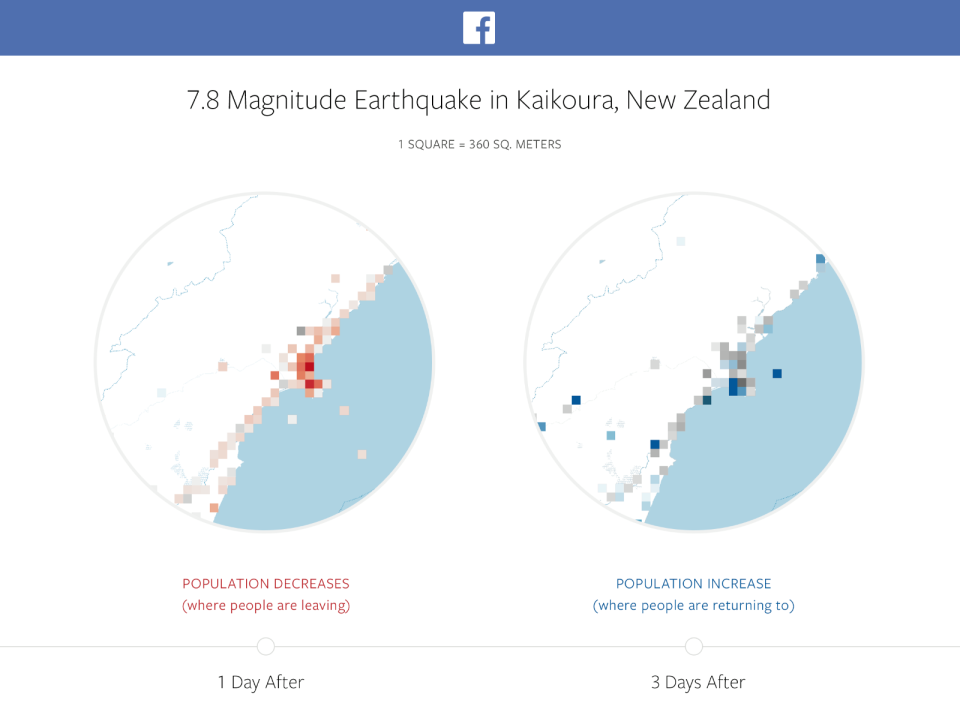 Dale Kunce, who heads up the American Red Cross’ use of technology and data during international disasters and was the focal point for the discussions with Facebook, explained that “if an earthquake happens at 2pm on a Tuesday, you want to know where is everybody an hour after that, and where are people typically at that time on a Tuesday? It’s using multiple pieces of data to help us understand the magnitude of disaster and the location of that disaster.”

The International Federation of the Red Cross and Red Crescent Societies (IFRC) is one of just three “trusted organisations”, along with the World Food Programme and UNICEF, that Facebook will initially share the maps with. A statement released by Facebook on Wednesday notes that “over time, we intend to make it possible for additional organisations and governments to participate in this program.”

Patrick Meier, author of the book Digital Humanitarians, who was hired by Facebook to consult on the disaster maps project, described it as “a game-changer for the humanitarian sector” that’s been “a long time coming”.

Meier said that apart from a few ad hoc projects, such as Google’s Person Finder and Airbnb’s disaster response tool, there had been little appetite in Silicon Valley for moving beyond traditional models of philanthropy and corporate social responsibility. Rather than applying their knowhow to help solve crisis response challenges, the tech giants have largely stuck to issuing grants, donating software and hardware, and encouraging employee giving, Meier said.

But in late 2015, Meier received an email from Facebook requesting a meeting about the mapping concept. There was also a new-found willingness to reach out to humanitarians for advice, Meier said. Facebook invited a number of NGOs to a workshop at Menlo Park in August 2016 to brainstorm ideas for collaboration. “I can’t stress enough how important it’s been to talk to the humanitarian organisations and get their feedback,” said Jackman.

In the not so distant past, both humanitarians and the private sector were wary about such partnerships. “There are reputational issues on both sides,” observed Andrej Verity, who leads information management projects at the UN’s emergency aid coordination body, OCHA, and co-founded the Digital Humanitarian Network.

Speaking to IRIN ahead of the launch of disaster maps, he noted that concerns around humanitarian agencies’ ability to manage sensitive data securely have been a sticking point for the tech companies, while the humanitarian sector has struggled with the idea of a profit incentive underlying companies’ willingness to get involved in disaster response.

In the case of Facebook, he added, “maybe they have enough money in the bank that they’re allowing a team to leverage the data they have to share some of that with responding entities. It buys a bit of loyalty and could be purely reputation-building.”

Facebook founder and CEO Mark Zuckerberg signalled the beginnings of a new approach to humanitarian response with his February post on “building global community” in which he noted that “the Facebook community is in a unique position to help prevent harm, assist during a crisis, or come together to rebuild afterwards”, and that he intended to direct more resources towards serving those needs.

The disaster maps may well have value in terms of strengthening Facebook’s brand, but Meier said he had also observed “a genuine interest in making sure this has a measurable impact”.

“I’m hoping that… it sends a bit of a signal to other Silicon Valley companies. I hope these companies realise they actually have an ethical responsibility,” he added. “They’re becoming like the new utilities of our time. When the power goes out… they have a responsibility to get the power back on.”

Microsoft has already been through a process of rethinking its involvement in humanitarian action. Although it has long had a humanitarian action department, “it’s been inconsistent in terms of what we do and where we do it,” said Jane Meseck, senior director of global programmes at Microsoft Philanthropies.

“We stepped back about a year and a half ago and decided to take stock and look at how we can engage and do more because we believe we have a very unique value we can bring to these situations and a moral responsibility,” she told IRIN.

“I think both corporations and humanitarian organisations are becoming more knowledgeable about what each can bring to the table,” she added. “We can bring technology, and cash in some cases; we’re also strong on data security and privacy. We can bring that knowledge and expertise in ways that haven’t been tapped before.”

For humanitarians, the main challenge now may be building the capacity and bandwidth – both in terms of internet connection and mental space – to incorporate newly available technologies and sources of data into their emergency responses.

“Bandwidth is the biggest issue in the field,” said Verity of OCHA. “Humanitarians are working in challenging environments so it becomes a stretch to expect them to be interested in these discussions about data usage.”

He added that different tools are being tried in different places, often depending on the interest of the individuals heading up regional offices.

Data from satellite imagery is playing an increasingly important role in helping humanitarian organisations map areas before and after a disaster. Silicon Valley start-up Planet Labs uses a constellation of small, inexpensive satellites to map the entire surface of the planet every day. The company’s rapid response team provides those images for free to more than 50 humanitarian organisations in low-bandwidth formats that field teams can easily process.

Satellite imagery data has obvious value in the wake of a disaster, but it can also be used to track slow-onset crises like droughts, as well as displacement caused by conflicts. “I think the sector is just waking up to the possibilities here,” said Andrew Zolli, Planet Lab’s vice president for global impact initiatives. “It could have the same kind of impact as the smartphone revolution; it could be a huge multiplier of humanitarian response.”

More powerful still is likely to be the combination of satellite imagery with other types of data, including Facebook user data.

“No single type of data is a silver bullet,” noted Zolli. “The real value of these new systems… comes when you use them together.

“So, when you have very high frequency satellite imagery and you can use the tools of social media to understand the needs and you put those two things together, you’re going to be able to do things at much greater speed and efficiency than we’ve done before.”

Kunce, of the Red Cross, pointed out that satellite imagery is of little use when the weather is cloudy as it was for a week following the 2015 earthquake in Nepal. There are also limitations to the use of social media data – not everyone has access to Facebook and even those that do may not have their location settings enabled or they may lose connectivity during a disaster.

“We like to be data omnivores,” he told IRIN. In addition to the newly available Facebook data, “we have lots of other different kinds of datasets.”

He gave the example of crowdsourced mapping – using online volunteers to add local detail to maps created with satellite imagery. After Typhoon Haiyan struck the Philippines in 2013, more than 1,700 online volunteers edited a map to help guide the Red Cross’ relief efforts. 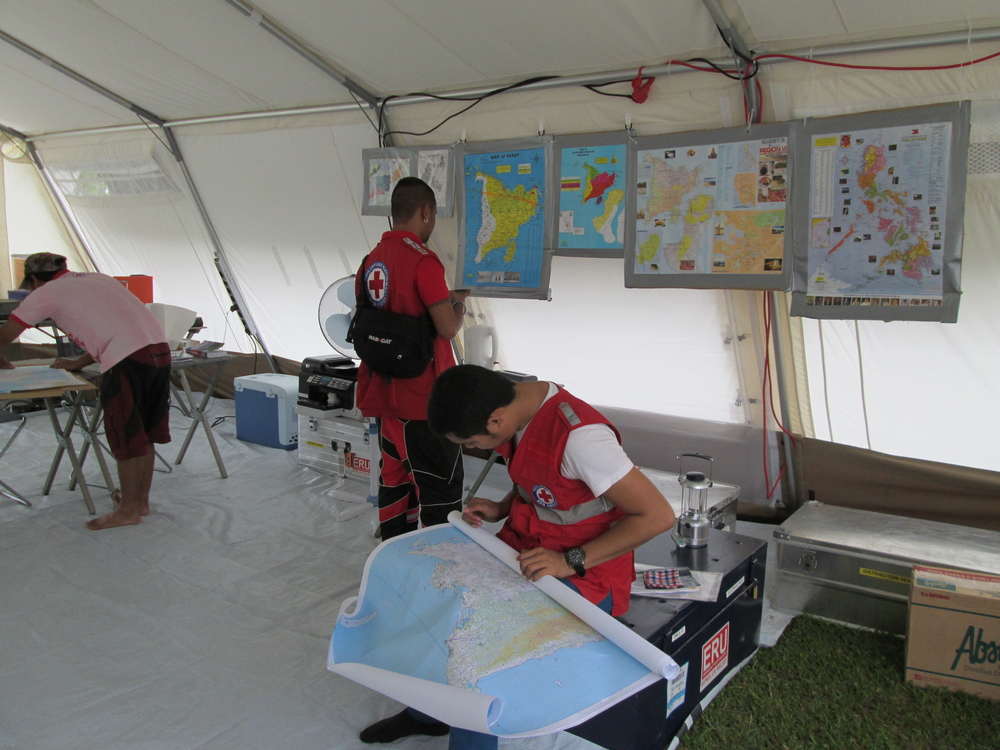 He emphasised that it was too soon to describe Facebook’s disaster maps as “a game changer”.

“I think there’s a lot of potential, but we haven’t yet used it for a disaster.”

In a blog published on Wednesday, Meier also notes that the maps are “not a silver bullet”, but points out that they are powered by Facebook’s nearly two billion users and can be made available immediately and updated at 15-minute intervals.

“This information is a public good that has potential to save lives,” he writes. “I sincerely hope that other Silicon Valley companies take note of these efforts and follow in Facebook’s footsteps.”