Shocking new video footage of civilian suffering in northeastern Democratic Republic of Congo (DRC) is being released by the NGO Christoffel Blinden Mission (CBM) this week.

The amateur videos, which include images of children being treated for deep machete wounds on the face and neck, amputees, spear and arrow injuries, corpses, mass graves, displaced people’s encampments and burning villages will draw much-needed attention to the crisis, CBM’s Central Africa representative told IRIN on Thursday. David McAllister said the decision to disseminate the footage, taken from September last year up to this month, was an “appeal to the world to intervene quickly” - and was in part a response to recent reviews of the Rwandan genocide of 1994, which discuss “what went wrong”.

As CBM is an NGO specialising in helping the blind worldwide, McAllister told IRIN that initially “we didn’t really know what to do with the video”, but that the region, nominally controlled by the Wamba dia Wamba faction of the rebel Rassemblement congolais pour la democratie (RCD-ML) and Ugandan troops “needs to be taken in hand”. 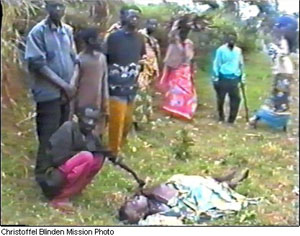 TV producers in Nairobi told IRIN that much of the material was too graphic and “unusable”, but one said that different TV markets have “different thresholds for what’s gruesome”. The Ituri crisis, spreading over a wide area of northeastern DRC from Bunia westwards, began last June with clashes over land between the Lendu and Hema communities, one predominantly agricultural and the other pastoral.

Missionary reports say an ethnic Hema, Adile Rutsove, was appointed as governor of the newly created Kibali-Ituri district in June, which fuelled resentment among the Lendu. Her replacement on 26 December by M Uringi of the Alur tribe, and reconciliation efforts by an RCD-ML commission have had little impact.

The latest CBM video documents multiple attacks by armed Lendu militants on Blukwa on 9 January, in which buildings are burnt, gunfire is heard and bodies are brought to a church. Other reports from the region also suggest an upsurge in fighting during the last three weeks. Neither Ugandan nor RCD-ML troops are reported to be actively involved in stemming the violence. The Ituri clashes have over the last six months developed into one of the most serious humanitarian crises in the Great Lakes region, humanitarian observers say, leaving 5-7,000 dead and tens of thousands displaced.

ICRC is aiming to reach at least 80,000 displaced people with supplies, while humanitarian reports say the overall number of IDPs could be double that figure. In another measure of the seriousness of the situation, a recent nutritional survey reported 11.6 global malnutrition and 9.1 percent severe acute malnutrition while Medecins sans frontieres (MSF) warned last week of disease outbreaks.

CBM has expanded its programmes in the region to provide extra medical supplies, and other international agencies active in the area include Medair and Oxfam. Attacks and threats on humanitarian workers, accused of bias, have however severely restricted international aid efforts outside Bunia town, humanitarian sources say.