She Said: Women’s lives, women’s voices You’ve heard it before. Women and girls pay a heavy price during humanitarian crises. She Said is an ongoing collection of reporting in which women offer glimpses of their lives, speaking with TNH from COVID-19 lockdowns, situations of conflict and displacement, and other global emergencies.
JE YANG CAMP, Myanmar

Uprooted for nearly a decade, women in displacement camps in Myanmar’s Kachin State are finding new ways to support their families as coronavirus restrictions squeeze livelihoods and aid.

The New Humanitarian spoke with three women in Je Yang about life in long-term displacement, their hopes for peace, and how the coronavirus has forced communities in Myanmar’s northern borderlands to contend with new worries.

June marked nine years since conflict resumed between the Kachin Independence Organisation (KIO) and Myanmar’s military, ending a 17-year ceasefire. Since 2011, the conflict has displaced more than 100,000 people, including some 38,000 living in KIO-controlled areas near the Chinese border.

The women who spoke with TNH — Marip Bawk Nu, 49; Labang Nan Doi, 56; and Lashi Lu, 48 — are the main providers for their families. Female-headed homes are common in Je Yang and other displacement camps. Some men have lost their lives to war or to landmines, while others serve in the KIO or leave in search of work in China or in Kachin’s vast jade mines at Hpakant, a government-controlled area about 250 kilometres away.

Before the pandemic, the women all earned a living mainly working on banana, coffee, and peppercorn farms and small construction sites in China’s Yunnan Province, returning in the evenings to collect water and cook for their families.

But Yunnan closed its borders with Myanmar in March, putting many people out of work. Most now struggle to find any income at all on the Kachin side.

The women say they are barely able to meet basic food needs, buy soap or masks, or pay for their children to return to school. Humanitarian access has been restricted for years.

But the women say they still dream of peace – and the day they can safely return to farming their own land.

“Whenever I think of my home, livestock, and farm, I am heartbroken,” Bawk Nu said. “Not knowing whether I can return, I feel hopeless, like I am in a dark place.” 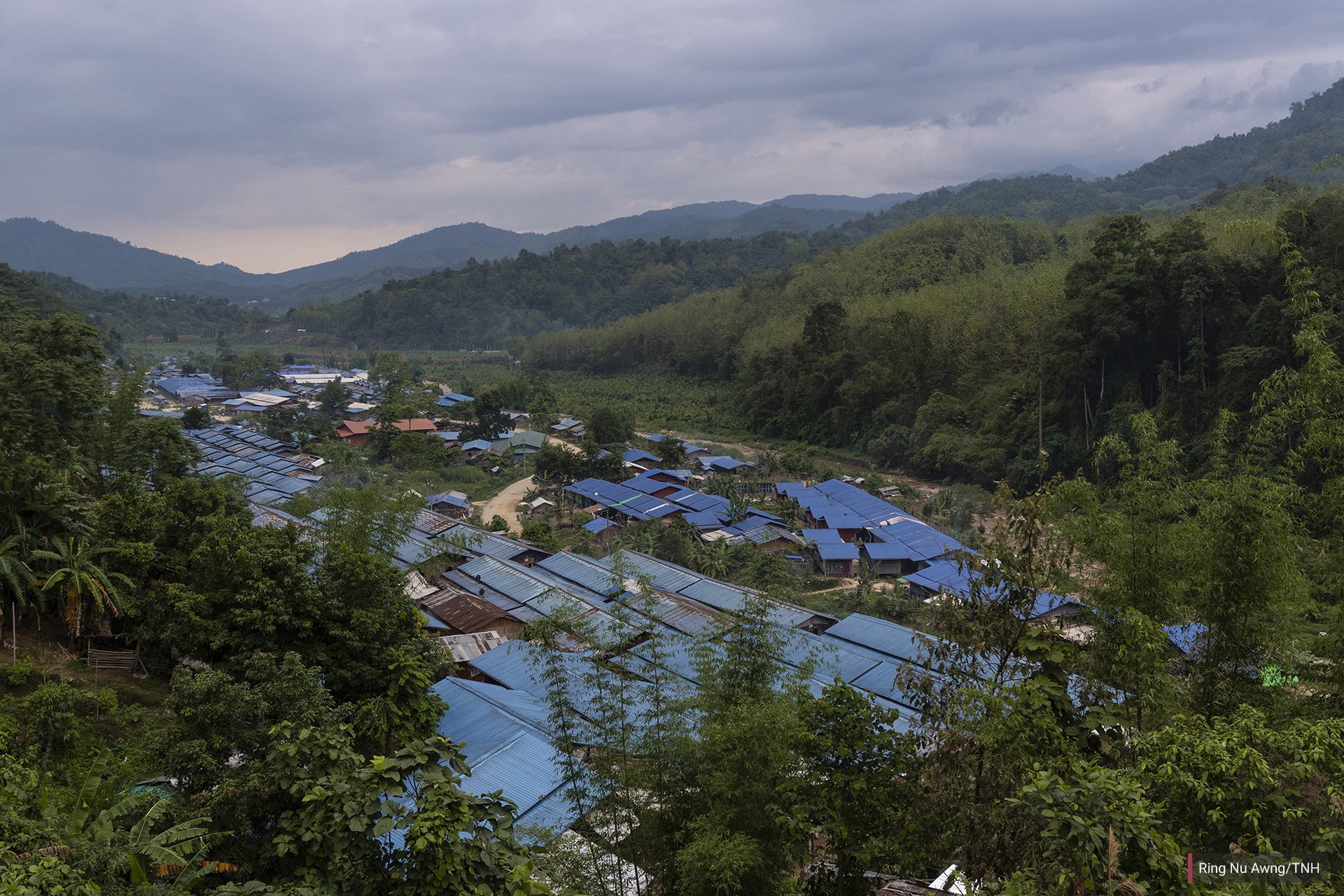 Conflict has simmered for decades on multiple fronts in parts of Myanmar. The Kachin conflict, which began in 1961, is one of the longest-running civil wars in the world.

The KIO is one of numerous ethnic armed organisations pushing for political autonomy from the central government – and with it, a greater share of resource control – since Myanmar gained independence from Britain in 1948.

Eleven armed organisations, but not the KIO, have signed on to the Nationwide Ceasefire Agreement, which the government touted as a major step toward peace when it introduced the accord in 2015. But progress stalled in the ensuing years, and plans for formal peace talks with the KIO and its allies have paused during the coronavirus pandemic. 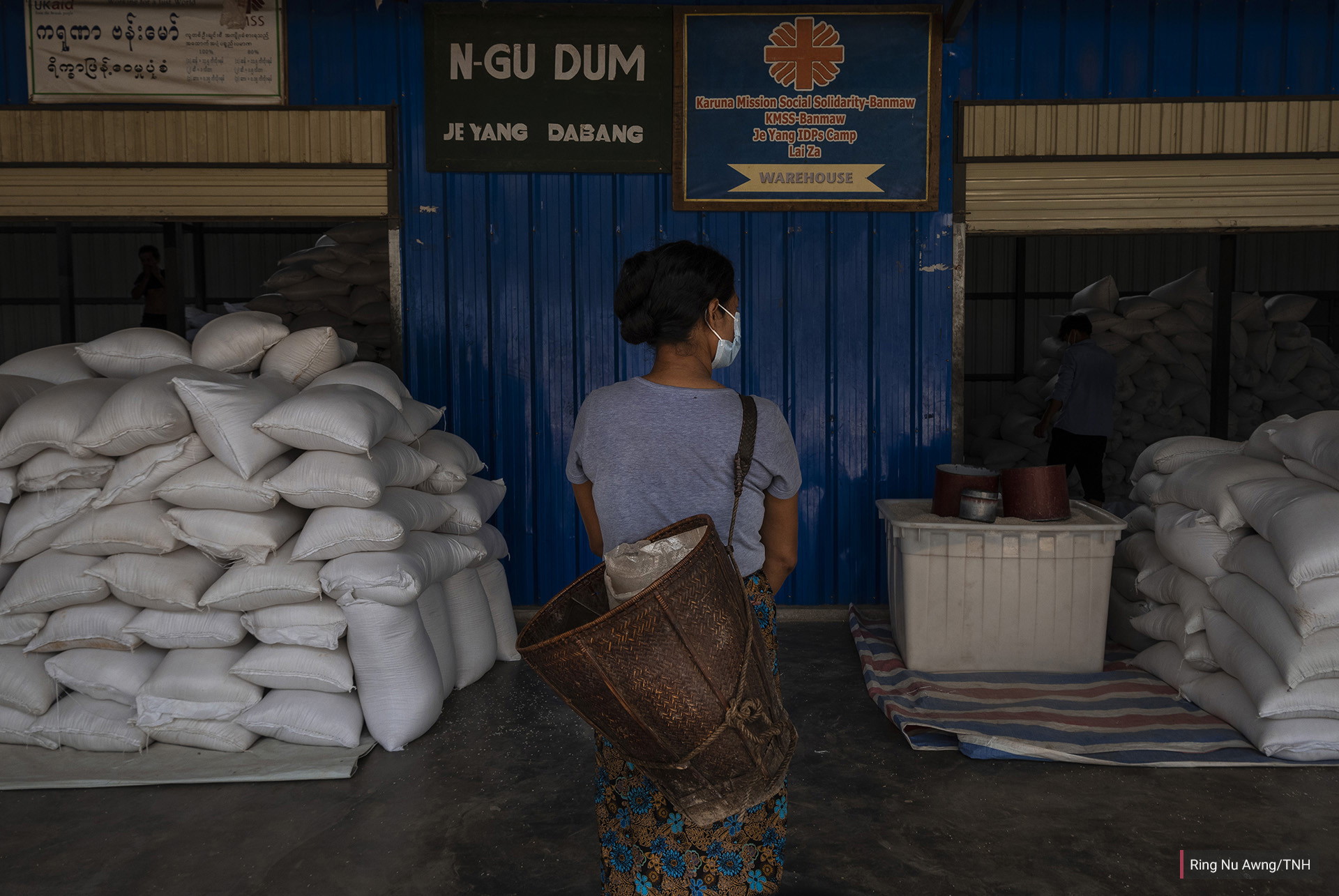 A woman in Je Yang IDP camp collects her family’s rations, which are available every two months.

Food, healthcare, and shelter in Je Yang are a challenge at the best of times.

It has always been difficult to make ends meet and feed their families, the women who spoke to TNH said. The coronavirus border closures and the loss of jobs have made things worse, they added.

UN travel to KIO-controlled areas has been blocked since June 2016, and local organisations have at times been accused of breaking the law when delivering aid. Associating with the KIO or its armed wing, the Kachin Independence Army, can carry a prison sentence of two to three years. Donor funding is also stretched thin; food rations in IDP camps in KIO-controlled areas are limited to rice, oil, and salt. 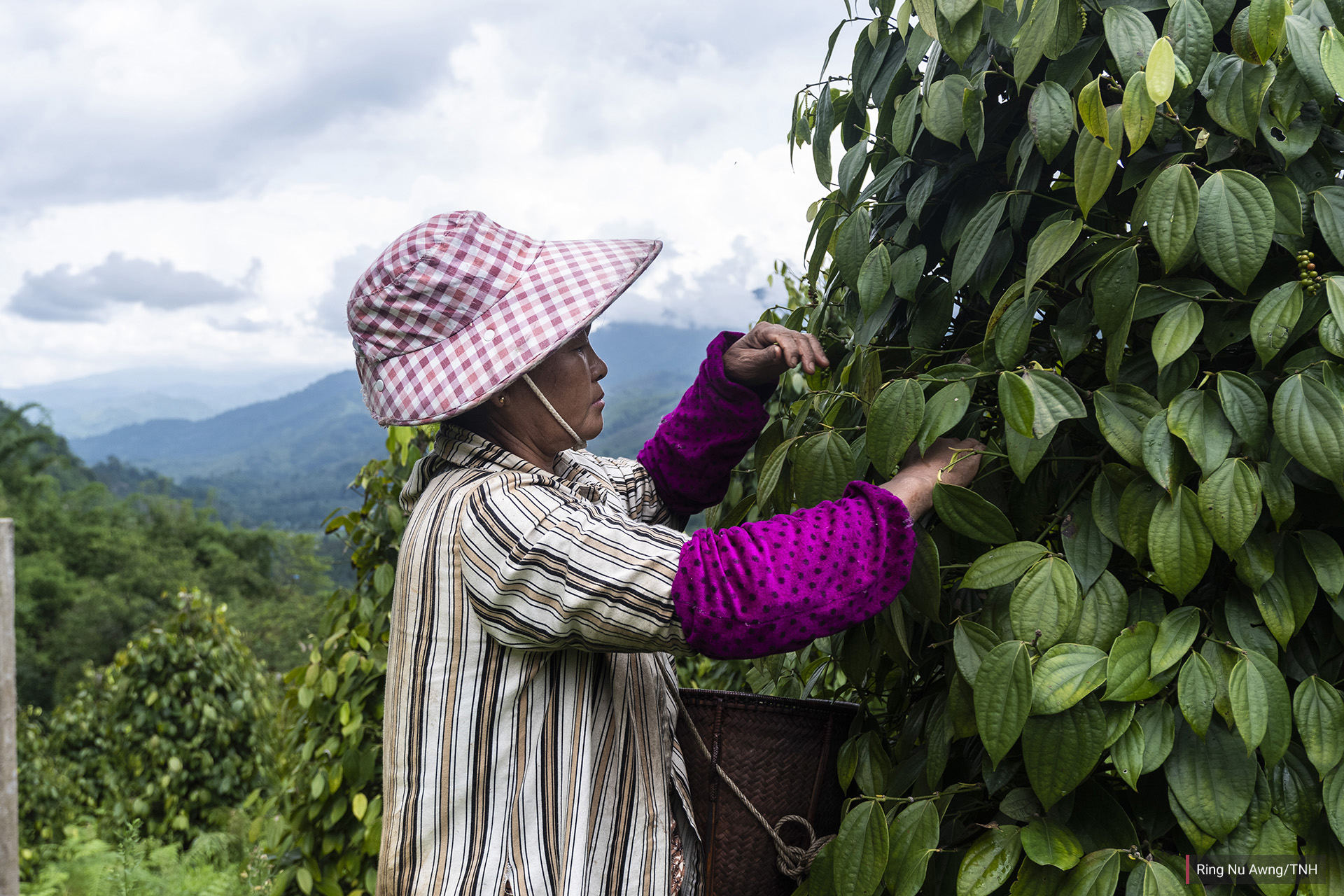 Farm labour is one of the only ways IDPs in Je Yang and other border camps can earn money, but opportunities to work have plummeted with the March border closures.

Before the pandemic, laborers usually earned about 40 yuan ($5.70) per day working for Chinese employers on both sides of the border, women told TNH. Men typically earned 10 yuan more at the same worksites – some employers pay women a lower daily rate than men, while others pay based on the size of the harvest collected.

“It is exhausting work,” said Nan Doi, describing her most common job carrying bananas. “Sometimes I sweat too much and it makes me unwell.”

After the border with Yunnan province closed, Nan Doi began working on a peppercorn farm near Je Yang. Although she’s paid roughly the same as she earned in China, work is only available two days a week. The harvesting season is about to end, and Nan Doi does not know where she will go next.

Nan Doi, whose husband passed away in 2003, is a grandmother who supports a family of four.

Other women are still searching for work.

Displaced from her village and farmland when the Kachin conflict erupted in 2011, Bawk Nu has persevered to keep her family healthy and educated in Je Yang. Her wages as a daily farm labourer supported her five children’s education.

But she hasn’t found work in a month. Bawk Nu’s two daughters have finished secondary school, but she worries about her three younger sons. The KIO offers schooling from primary to post-secondary levels; tuition is free or less than $10 per year, though students must cover the cost of books.

‘Help us have a safe place’ 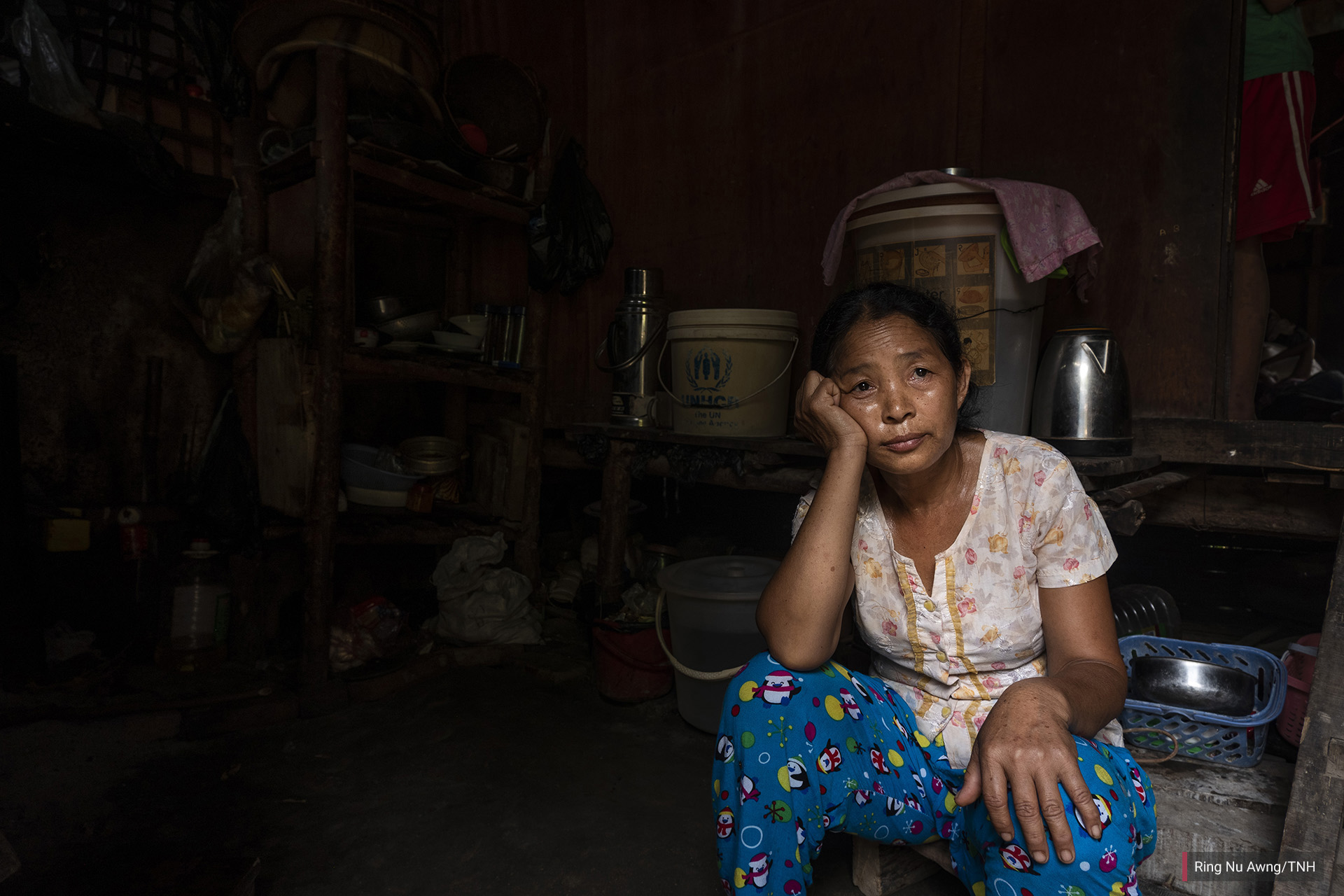 Lashi Lu sits in her shelter in Je Yang. She fled her village in 2011 with her two children, mother-in-law, and niece.

“Since I became an IDP, things got harder and harder and I became dependent on humanitarian aid,” said Lashi Lu. “I don’t feel like my life is developing.”

Unable to find work since the pandemic, she has been foraging for edible plants and leaves. But sometimes her family only eats plain rice with oil and salt.

Hope is fading for a return to the life she remembers before the war. “Sometimes, I don’t even think I will be alive when peace comes,” Lashi Lu said.

In the past year, the government has pushed to close some northern IDP camps and accelerate returns. But organised returns and resettlements beginning in early 2019 have been fraught with controversy due to the lack of a ceasefire in Kachin, as well as widespread landmine contamination. Mines have killed or injured at least 26 civilians in Kachin and northern Shan states this year, rights groups say.

Lashi Lu said she would not feel safe going back to her village because of the threat of landmines, even if there were a ceasefire. Instead, she hopes to start fresh somewhere else.

“I want the government to build us proper houses, churches, and schools,” she said. “I want international and local organisations to build us shelters and help us have a safe place.”

Running low on soap and masks 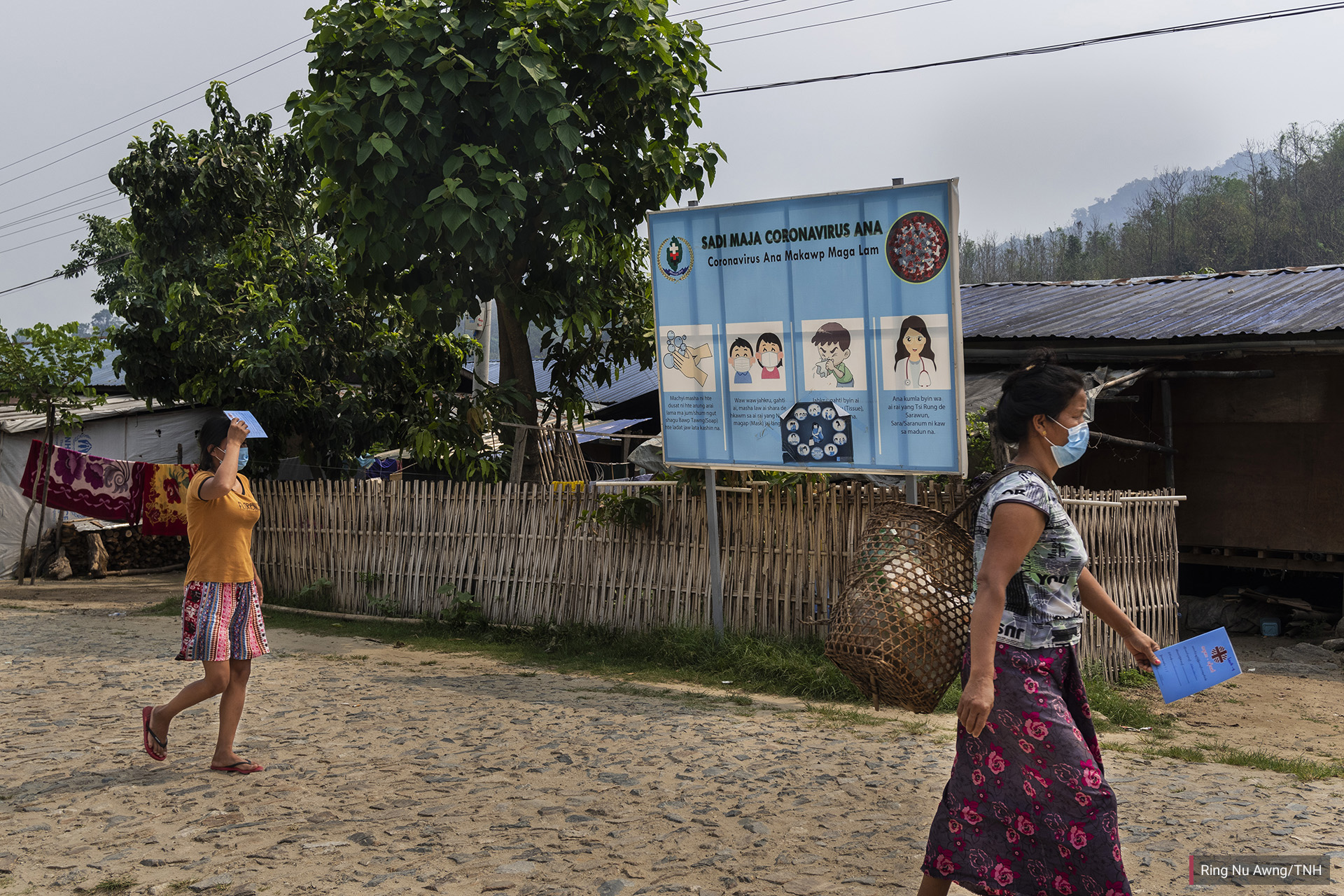 Women who spoke to TNH said they try to follow COVID-19 prevention guidelines, but donated soap and masks are running out and they cannot afford to buy more.

Myanmar has reported more than 300 cases nationwide as of 2 July, though testing has been limited. No COVID-19 cases have been reported in KIO-controlled areas.

On 11 June, a nurse responsible for screening returning migrant workers at a government-controlled border gate in Kachin tested positive for COVID-19, sparking renewed alarm in border areas. Although no one coming into contact with her has yet tested positive, the KIO has increased movement restrictions, further limiting livelihood options.

Containing an outbreak in IDP camps would be difficult. Each shelter houses multiple families, and water and sanitation facilities are communal. In Je Yang, there are 57 bathing areas and 273 latrines for 8,700 people.

The KIO has formed a COVID-19 prevention committee, and has worked with local aid groups to build hand-washing stations and share health safety messages. But healthcare and coronavirus treatment options are limited in areas under KIO control.

‘I really want this war to end’ 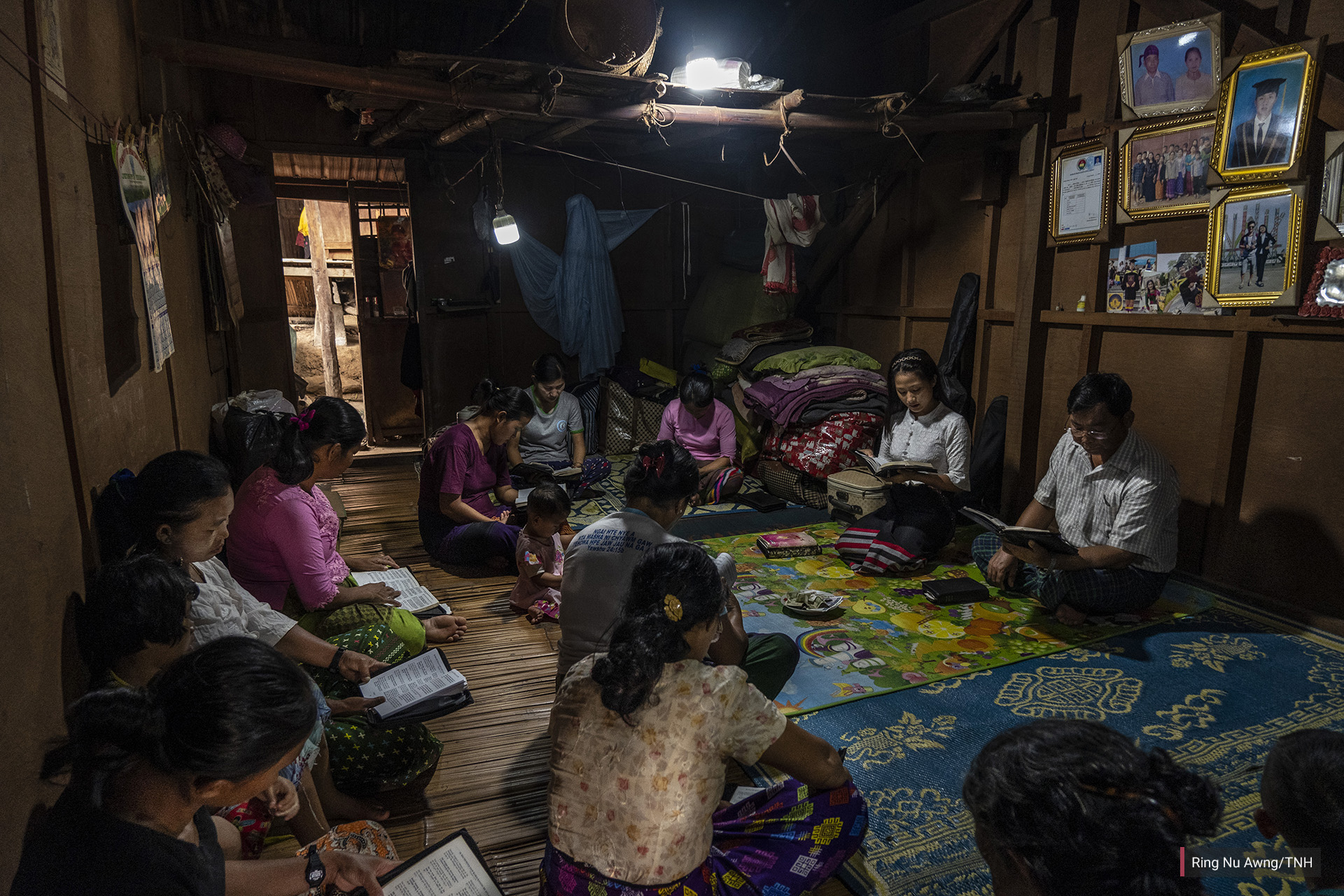 Women gather to pray in a shelter in Je Yang.

Most Kachin are Christian, and faith is a source of inspiration. Many IDP camps in Kachin are on church grounds, while several local aid providers are faith-based groups.

Nan Doi, Bawk Nu, and Lashi Lu said they long for the day when they can safely return to their old way of life.

“I think both sides should stop fighting and come to peace,” said Nan Doi. “I hope I can work on my own farmland soon.”

She added: “I am tired of being an IDP with so many adversities. I really want this war to end.”