“PEACE STARTS NOW” was the headline splashed in capital letters across the front page of Myanmar’s state-backed newspaper on 15 October. It was an ambitious statement on the day the government and eight armed groups signed a ceasefire agreement intended to end 60 years of ethnic warfare, but one that many would dismiss as pure propaganda. 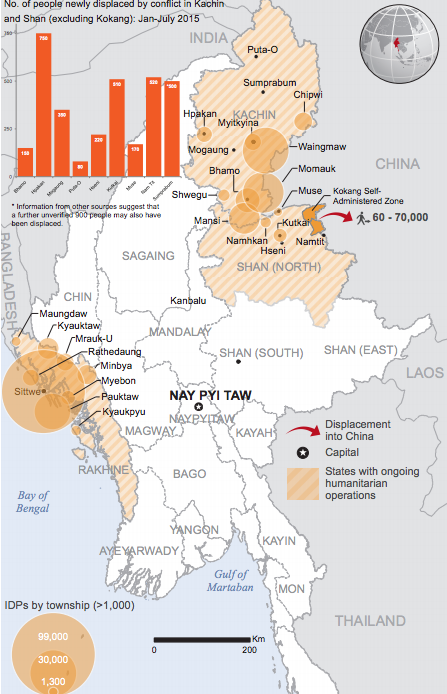 The quasi-civilian government that took power in March 2011 after 49 years of military rule had made signing a Nationwide Ceasefire Agreement (NCA) a key goal of its reform programme. Several deadlines were set and broken, but with an election looming, negotiators finally ran out of time and the government pushed the NCA through. In the end, only eight of the 15 groups invited to sign did so, while the government refused to allow others to take part in negotiations.

The accord is a useful campaign tool for the government, which is dominated by former military men and serving officers who hold a constitutionally mandated 25 percent of parliamentary seats. The ruling Union Solidarity and Development Party can claim it as a sign of its commitment to reform as it goes into the 8 November elections, but even the ceasefire’s name is misleading. The agreement can hardly be considered “nationwide”, since it excludes the majority of Myanmar’s approximately two dozen armed groups, including some of the most powerful ones. Yet, people involved in the process say the ceasefire document is, at the very least, a starting point for peace negotiations to address root causes of the conflicts.

Whether serious talks materialise depends on the participation of ethnic armies, which have little trust in the process. They have warned repeatedly that military offensives are undermining ceasefire negotiations, and the violence has continued: there was fighting even on the day the accord was signed.

In fact, there has been more violence under the semi-civilian reformist government than under the previous military junta. Conflict has increased despite – or perhaps because of – the ceasefire negotiations.

“I have covered the civil war for 35 years, and the fighting since this government was set up in March 2011 has been the heaviest and most intense since the 1980s,” said Bertil Lintner, a Swedish journalist who has written several books about Myanmar’s ethnic conflicts.

Other long-time Myanmar watchers have made similar observations, although they are hard to prove empirically. Myanmar’s ethnic armies operate on the country’s frontiers: with Thailand and Laos in the east, China to the north, and India and Bangladesh in the west. On a map, the conflicts form a horseshoe around the heartland of the Bama, the most numerous ethnic group, members of which dominate the government and economy. The military prevents access to many border areas, making it difficult to independently verify reported outbreaks of fighting.

Despite the challenges to accessing accurate data, there is some statistical evidence provided by groups that have tracked the violence that it has increased under the new government, as ceasefire negotiations were ongoing. The Uppsala Conflict Data Program at Sweden’s Uppsala University has been tracking English language media reports of conflict and has produced estimates of deaths due to fighting. The UCDP data shows a downturn in violence in the mid-1990s when the junta signed bilateral ceasefires with ethnic armies. The number of deaths began rising as the reformist government took power.

The Myanmar Peace Monitor has been tracking violence since 2011 when the reform government took power. Rather than recording only deaths, the researchers included outbreaks of violence. Their data, augmented by confirmed reports by sources on the ground, shows a steady rise in the intensity of the conflict since the start of the ceasefire negotiations.

Peace talks that are scheduled to follow the signing of the accord will face the same challenges as the ceasefire negotiations, as well as a few new ones.

Firstly, some of the most powerful armed groups in the country have not signed on. These include the Wa State Army, which has an estimated 20,000 to 30,000 fighters, and the Kachin Independence Army (KIA), which returned to war when the military broke a 17-year ceasefire just months after the reformist government took power in 2011. The government has so far refused to allow three more groups it is currently fighting to take part in negotiations: the Myanmar National Democratic Alliance Army launched a war in early 2015 to take back control of the Kokang region on the border with China, drawing in the Ta’ang National Liberation Army, which operates nearby, as well as the much smaller Arakan Army.

Instead, the ceasefire agreement includes only one major ethnic armed group that was not already affiliated with the government, the Karen National Union (KNU).

“Only the KNU can claim to be a genuine former rebel army,” according to Lintner. He said the remaining seven groups are either already aligned with the government or are much less significant militarily or politically.

The All Burma Students Democratic Front is not actually an ethnic group, but was formed after the junta crushed the 1988 student-led uprisings and has not had active soldiers since the 1990s, according to Lintner. The Pa-O National Liberation Organisation is also militarily insignificant, as is the Arakan Liberation Party and the Chin National Front. The Shan State Army-South is more powerful, but rather than having roots in ethnic liberation struggles, it was formed from the remnants of the private army of a former drug lord, Khun Sa, after he surrendered to the government in 1996. The final signatory group, the Democratic Karen Benevolent Army, broke away from the KNU in the 1990s and has been a “government-allied militia” ever since, said Lintner.

The government has said other groups can join the ceasefire as peace negotiations continue. The accord sets down requirements for establishing a committee to lead the political dialogue and includes a timeline for the start of negotiations with the government. That in itself is at least a minor victory, according to some observers who see it as a starting point for talks about federalism and resource sharing.

WHAT WILL THE SOLDIERS DO?

Despite doubts about the government’s sincerity, some groups signed on because it was the last chance before the elections, which could change the country’s political make-up. Others refused to sign because they distrust the government and the military, insisting that all ethnic armed groups should be invited to sign. It’s not a situation that inspires great confidence in future negotiations. 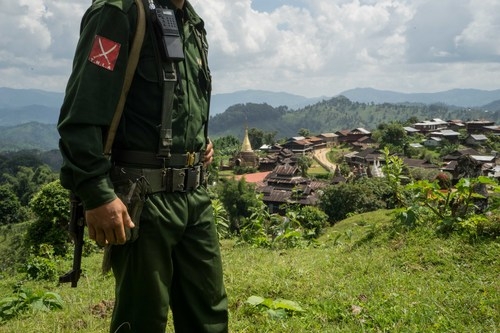 “Those who are yet to sign are afraid of hidden traps,” said Khuensai Jaiyan, founder of the Shan Herald Agency for News, a respected media outlet focusing on northern Myanmar. “Those who have signed are afraid the opportunity to hold dialogue won’t come back again.”

The accord also requires setting up teams to monitor the ceasefire, which will be challenging. Ethnic armed groups sometimes cooperate in areas where their territory intersects, but it is unclear how a ceasefire would work if one group was included and another was not.

Then there is the military strategy. Most groups invited to sign already held ceasefire agreements, but the military has consistently launched attacks against them anyway. And offensives have only increased under the reformist government. Some see that as a tactic to pressure ethnic armed groups to take part in ceasefire talks and make concessions. Will the military change its strategy during the next phase of negotiations?

“(The military) doesn’t appear to recognise the state level and union level ceasefire agreements signed by the government,” said Khuensai Jaiyan. “Let’s see if it honours the NCA it has just signed.”

Recent history suggests that the government’s newspaper, the Global New Light of Myanmar, was more than a little premature in trumpeting the message that “peace starts now”. More likely, the conflict will continue or even worsen as negotiations go on, and the final outcome is anybody’s guess.

“We will know for sure in the coming months whether or not there is political dialogue as specified in the NCA,” said Khuensai Jaiyan. “Other than that, I don’t have a crystal ball.”