On the outskirts of the Colombian border city of Cúcuta, nearly 1,000 Venezuelan families have struggled to rebuild their lives in the Alfonso Gómez settlement since they arrived roughly two years ago. Now, borders are shut because of the coronavirus threat, jobs have dried up, and their new normal has shifted yet again.

Colombia has been under national quarantine since 24 March, and the border with Venezuela has been closed since 14 March, blocking a key economic artery for this northeastern region. There have been more than 100 deaths and 2,709 cases of the virus in Colombia.

Photographer Pu Ying Huang and journalist Dylan Baddour have covered the predicaments of migrants crossing into Colombia from Venezuela, many of whom – fleeing their country’s economic and healthcare collapse – have walked and hitchhiked through the mountainous terrain in search of stable work and basic necessities.

These images offer a glimpse of life in Alfonso Gómez – an informal community with winding dirt paths that is outside the jurisdiction of any local government. The wild, open area was claimed by an armed group that then allowed people to settle on it, transforming the land into an expanse of mishmashed tarp homes and dirt roads.

Cúcuta authorities know such “invasion neighbourhoods” exist, but there's little they can do once structures are built. Children here are allowed to attend local schools thanks to a 2018 policy to provide education to Venezuelan migrants, although many students can’t find classrooms with space for them and, when they do, they often need to walk long distances to reach them.

“Before, I thought we were the most hopeless that we could be, but I never imagined this,” said Elizabet Gomez, who skips meals to save food for her three-year-old son, Fabian.

Since the outbreak of COVID-19, Gomez's husband Fernando has lost his work selling ice cream and avocados on the street. Her best hope now, she said, is to sell her iron, but it will be difficult given the restricted movements people face under the quarantine. Informal workers aren’t allowed on the streets during Colombia’s national lockdown.

“I'm scared of everything that's happening and I can't do anything about it,” Gomez said. “We live day to day. Now, we can't work because they don't allow us to.”

More than 1.6 million Venezuelans now live in Colombia, many of them on the verge of hunger. Faced with a shortfall of humanitarian aid, migrant families here crowd into shacks made of scavenged material. Food and work are scarce.

The prospect of having a somewhat stable fixture in their lives – a roof over their heads – has seen scores of Venezuelans put down roots in this desert hillside. “Most people here used to sleep in the streets, the park, the bus terminals,” explained Sonia Pimento, the 45-year-old leader of the settlement.

A US medical mission recently travelled to Alfonso Gómez, distributing medicine and hygiene products, and giving tips for how to stay safe amid the global coronavirus outbreak.

There has been at least one case in the settlement, Pimento said. "Everyone here is staying in their houses, locked up like a little bird in its cage,” she added.

‘We are building something’ 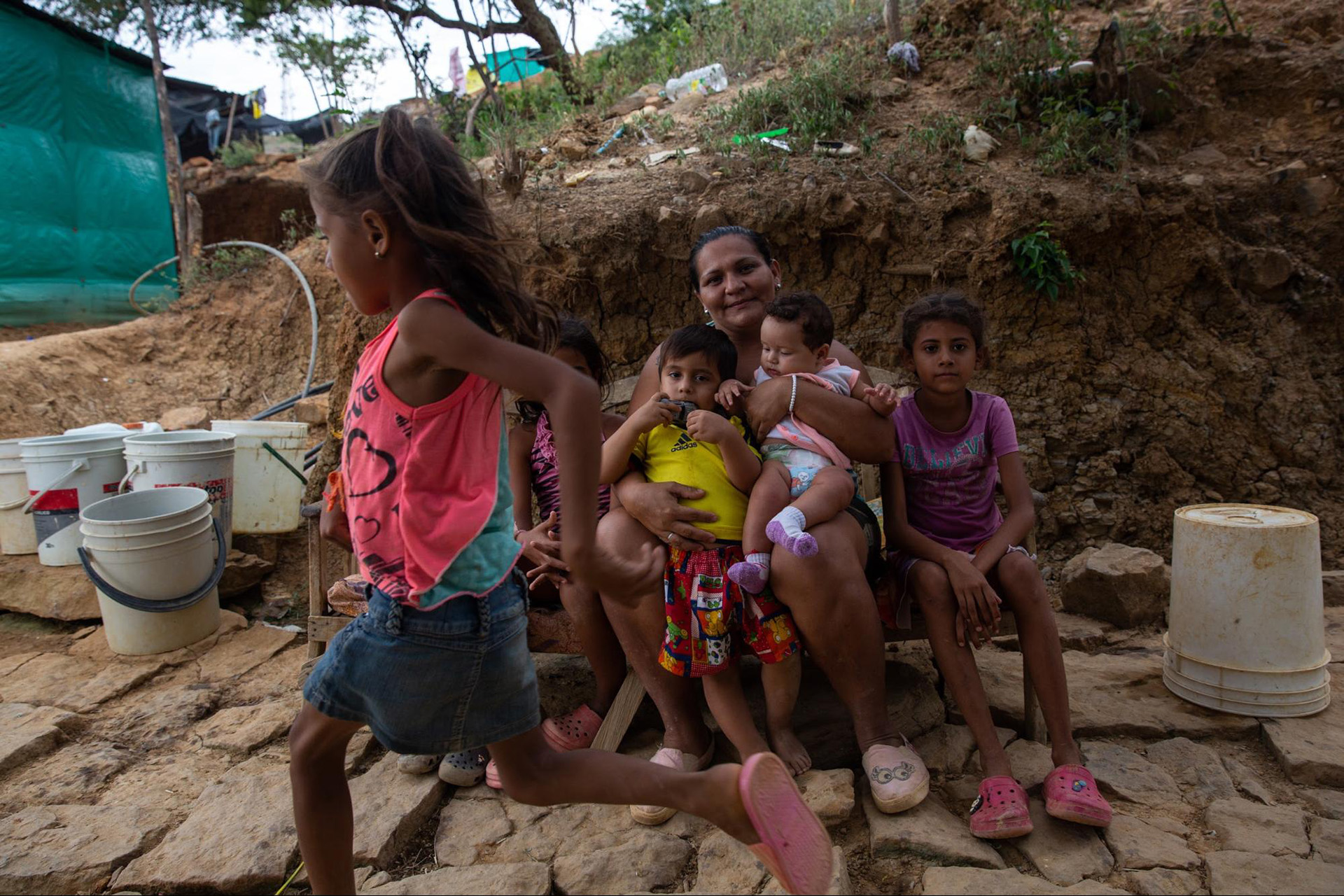 Yuri Castro, 32, sits with her children for a portrait outside their home. None of the children are enrolled in school. She remembers when she arrived nearly two years ago: “Those were the worst days of my life.”

Castro, who came from a big family farmhouse surrounded by crops of corn, yuca, potato, and plantain in western Venezuela, arrived without knowing how she would get by.

She begged repeatedly for a plot in Alfonso Gómez before she was given a steeply sloping lot on a hillside. For a month, the family slept on the ground without a roof. They brought water down by bucket as they worked to dig a flat space out of the rocky terrain. A friend donated a tin roof.

“This was horrible at first,” Castro said of the home, now with a stone patio and a caged tropical bird named Cacatua out front. “Little by little, we are building something.”

Tarp walls and a tin roof 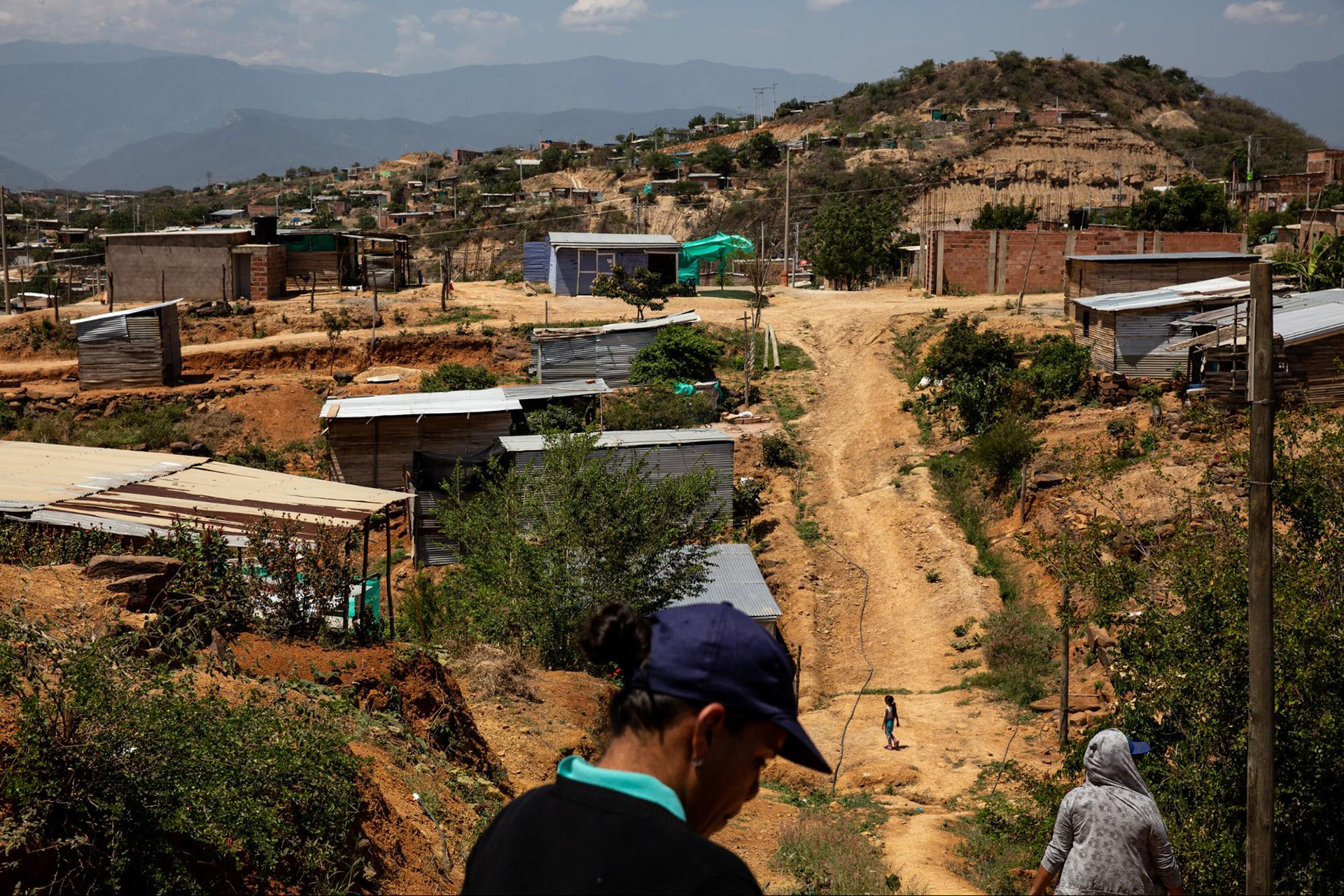 Oriana Duran, 33, who has also been living in the settlement for two years, shields herself from the sun as she walks down a dirt path through the neighbourhood. She grew up with the cool Caribbean breeze of Venezuela’s coast, worlds away from the parched orange dirt in these arid hills. “You never get used to this heat,” she says.

For a while in the centre of Cúcuta, they paid rent while Duran’s husband worked a few odd jobs. But they were always on the verge of eviction. When they heard that some other Venezuelans had claimed land for a settlement in the hills outside the city, they decided to claim a plot and set up a shelter.

“Little by little, we (made) a house,” she says, standing outside the two-room shack her husband built of green tarp walls and a corrugated tin roof. “It’s shocking for someone who has never lived in a shack.”

School, but no breakfast 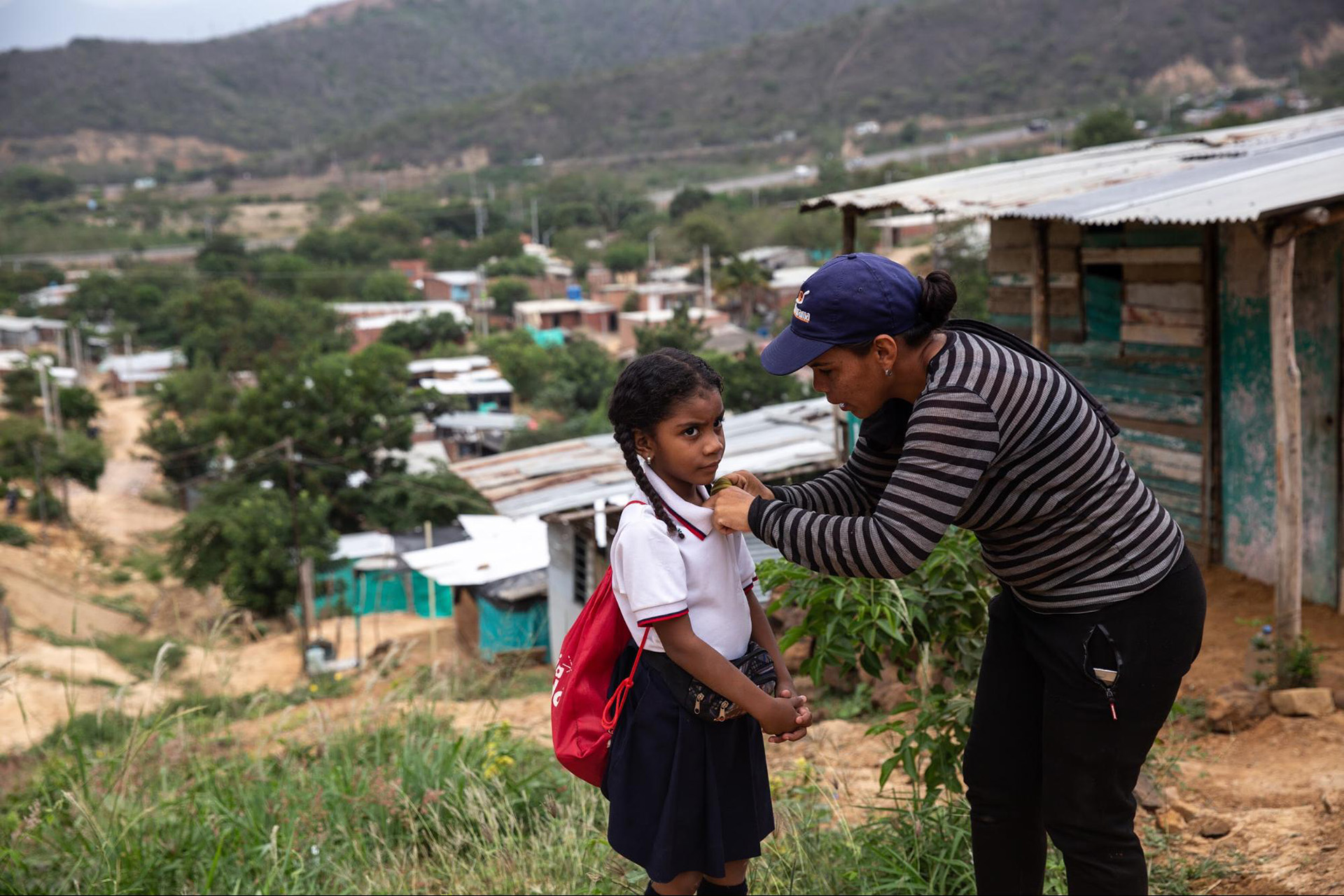 “I want to eat before studying,” six-year-old Nicole Gulfo tells her mother Oriana Duran. “You’ll have to put up with your hunger,” Oriana says, fixing the collar of her daughter’s school uniform.

Gulfo, along with her two sisters, walks 30 minutes to school each day. They are among the few lucky ones. Classrooms across Cúcuta stopped accepting students because of limited resources and overcapacity. Even when there is space, some potential students have been barred by the cost of entrance exams, at 20,000 pesos or the equivalent of about $6.

A stove, a television, and other donations 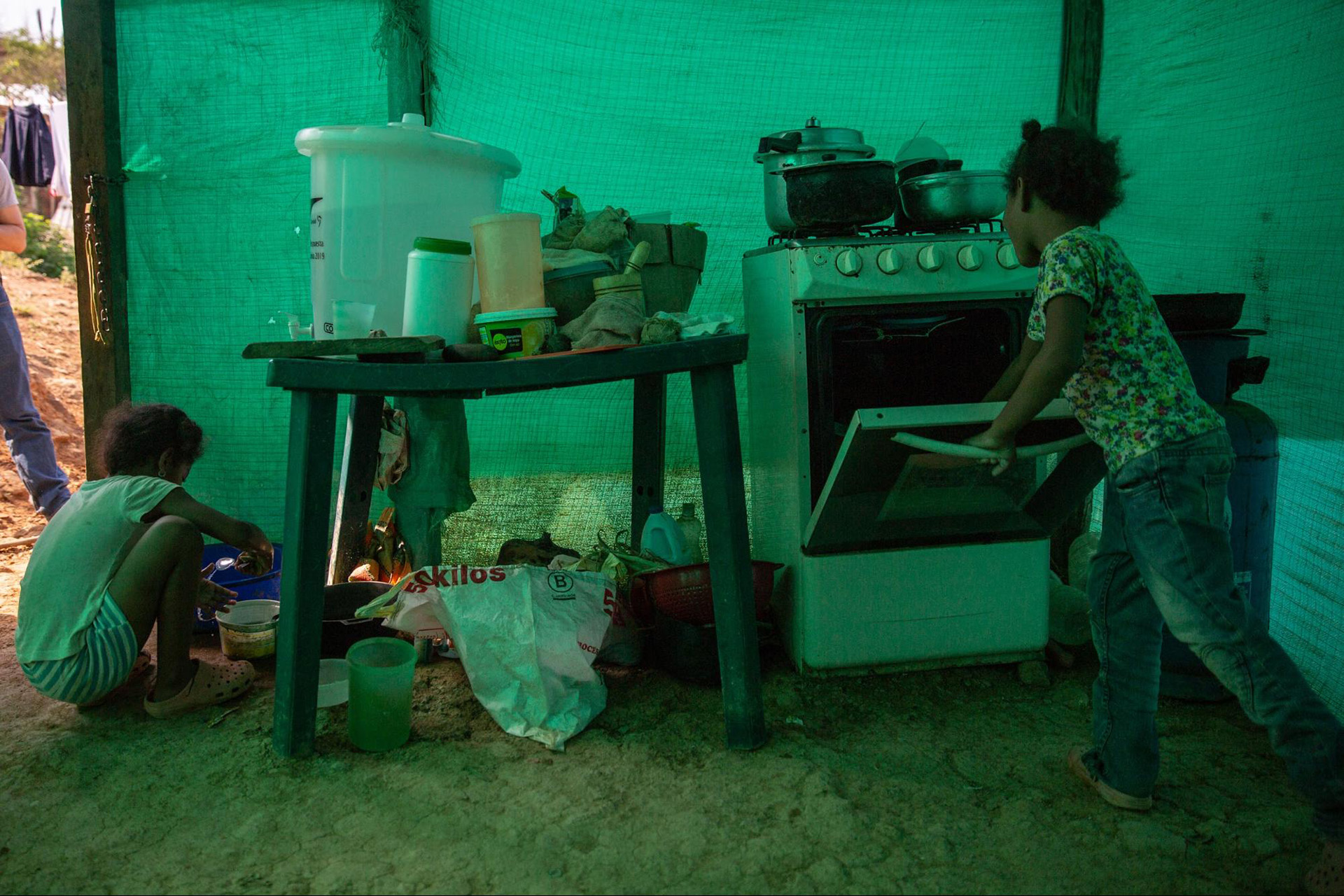 The plastic tarp walls casts a green tint over the kitchen as Nicole Gulfo does the dishes and her little sister Susej, five, puts the bowls away in the oven.

Nails through bottle caps hold the plastic tarps onto the sticks that form the home. A curtain divides a bedroom with two beds donated by a local church. Heaps of plastic trash bags hold the family’s clothes. Buckets are used in the absence of toilets.

A donated television and a lightbulb on the ceiling are powered by an electrical wire that runs from another neighbourhood down the hill. In the kitchen, an old stove connects to a gas tank. Both were donated. 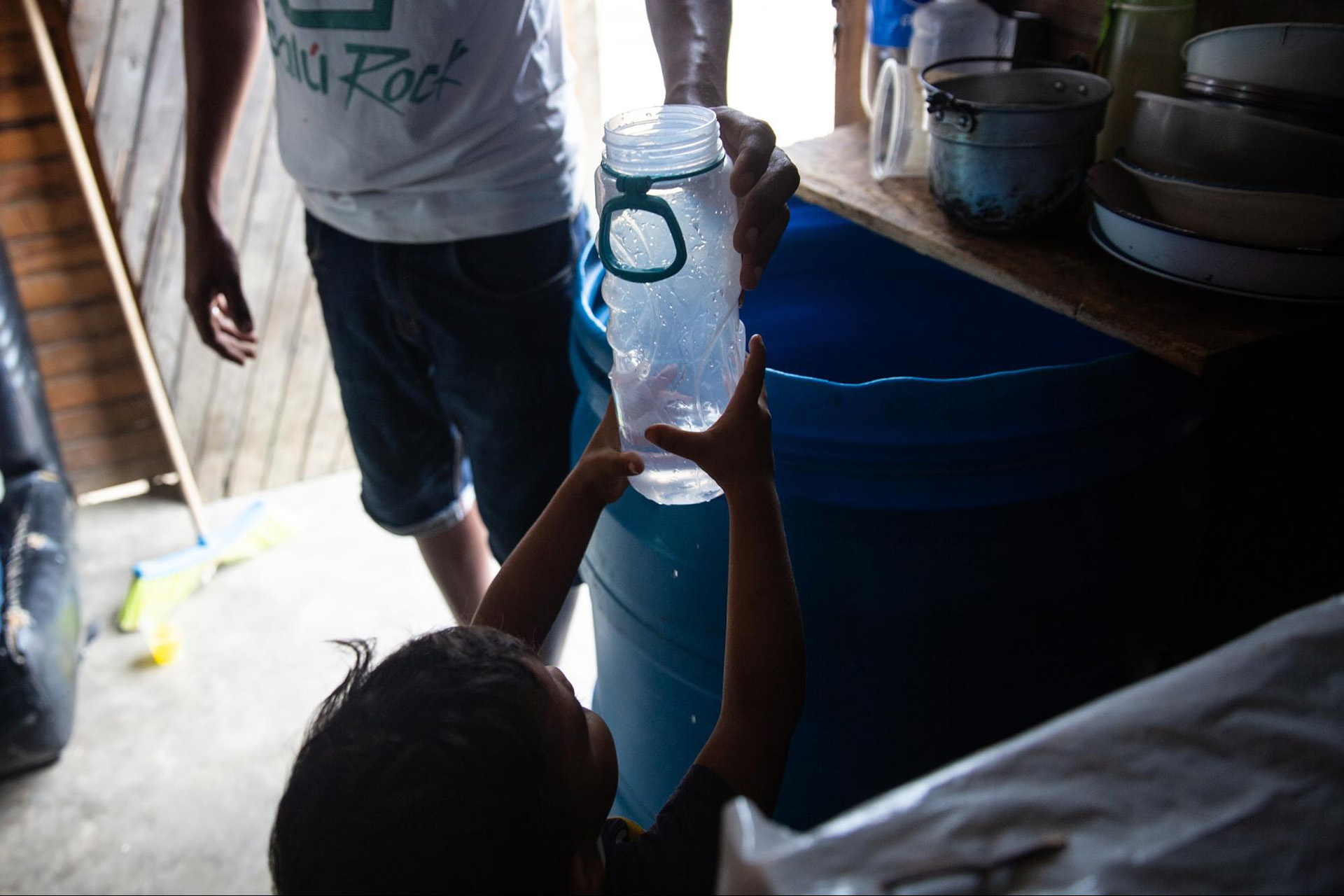 Elizabet Gomez’s son, Fabian, takes a bottle of water from a barrel in his family’s tiny kitchen. The barrel, filled sporadically by a hose tapped to another neighbourhood’s supply, holds all their drinking water. Sometimes it lasts them 10 days, between opportunities to fill up.

Some families have received donated water tanks from charity organisations. Others keep multiple buckets of water filled to the top at all times – split between uses for drinking, bathing, and washing – never knowing when the line to the tap will be shut off.

Most families say they subsist mostly off staples like peas, beans, and rice, sometimes augmented with hot dogs, eggs, and bread. Fresh meat is rare. For vegetables, families go to Cúcuta’s wholesale market around 2am, when transporters come to unload potatoes, onions, peppers, and plantains that will go to the city’s restaurants and supermarkets. The families beg for damaged items or donations.

A charity kitchen, funded by the World Food Programme and run by the Catholic church, is also available – but it only serves children and the elderly. Food vouchers from the WFP are available for families to shop in local supermarkets.

Coping with medical needs and stress 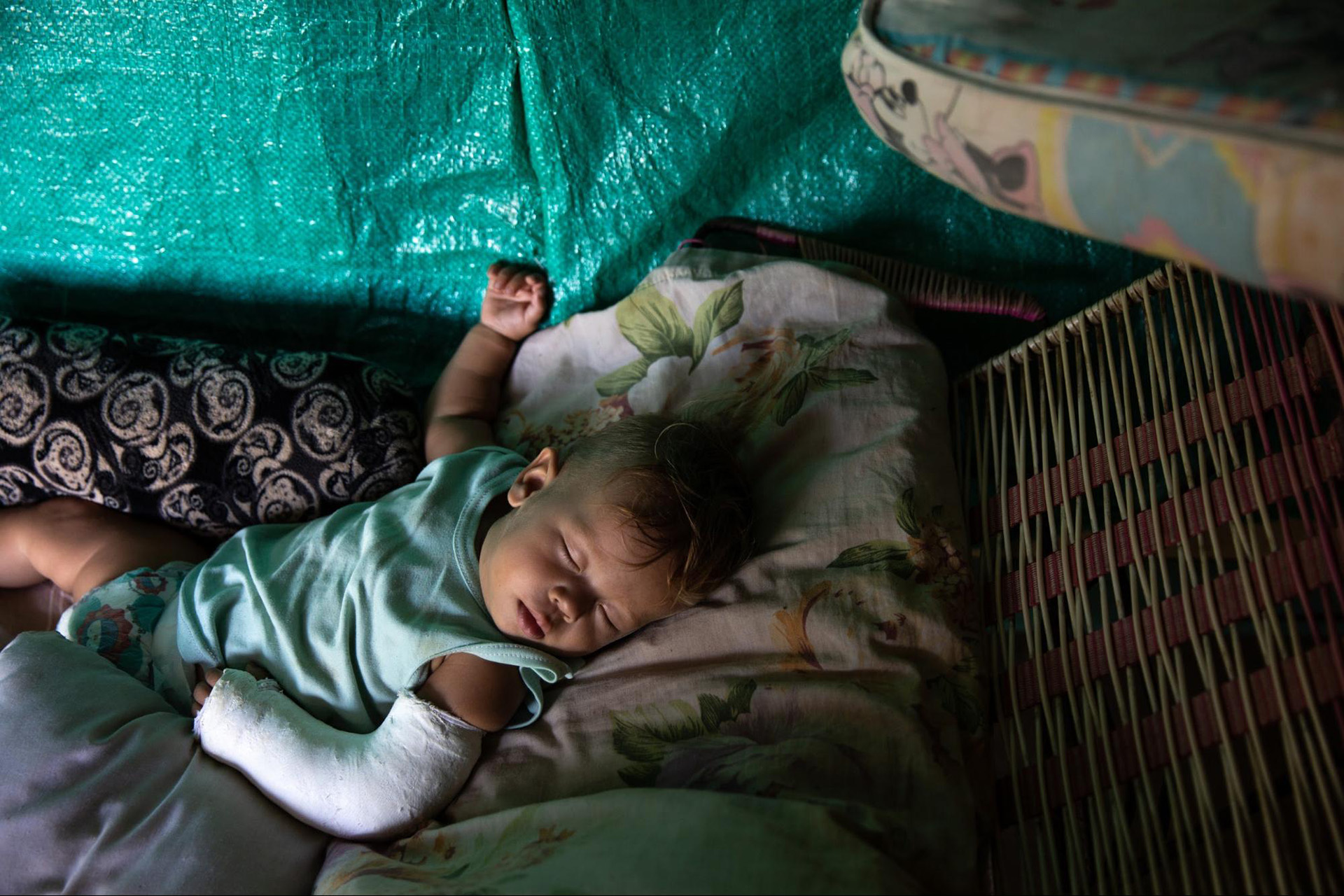 Alyanid Castellar, nine months old, rests atop a bundle of blankets on a chair that serves as a makeshift bed. Castellar, who fell and broke his arm, was treated at a Colombian hospital because he was born in Colombia, making him a resident and qualifying him for healthcare.

Others are not so lucky and depend on volunteer health services for treatment and medication.

For example, the International Rescue Committee, an international NGO, provides a nurse or doctor to check up on children and pregnant women. Sometimes, psychosocial workshops are run in the community centre to help migrants deal with the mental strain. 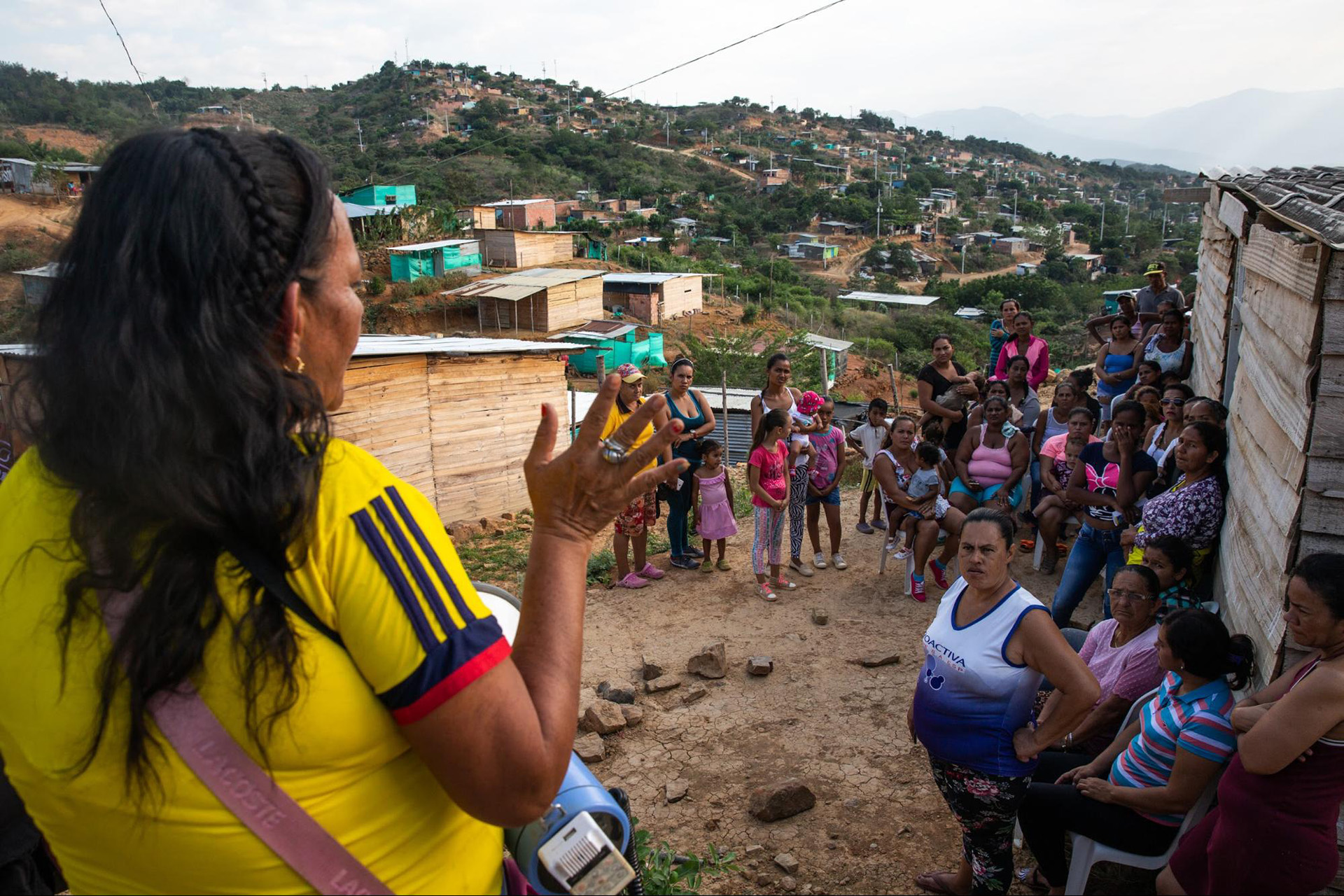 Sonia Pimento, leader of the Alfonso Gómez community, holds a meeting to share news of NGOs coming to offer training in domestic violence and leadership.

Pimento assumed leadership after seeing a need to organise the newly arrived families looking to stake out land. As the neighbourhood grew, Pimento began to recruit other women leaders to help solve the needs of the community.

“Through training, people started seeing there was strength in unity.”

Pimento coordinates contact between the community and humanitarian groups. Groups have donated water tanks, water filters, and beds to many households. Others offer leadership training for adults and adolescents, aiming to keep the peace in a community that is beyond the reach of local government and the police.

‘My future is to keep working here’ 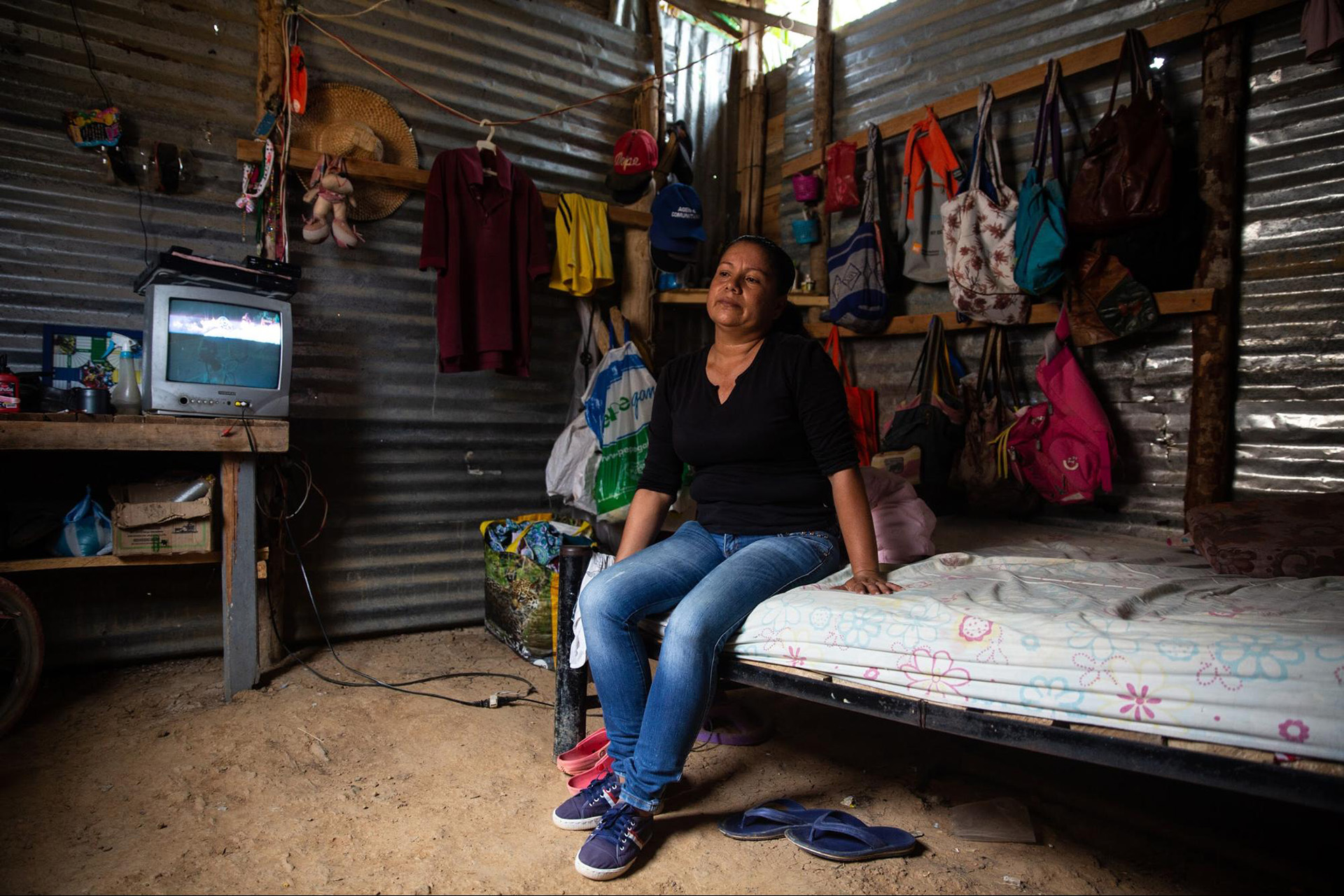 “We lived very well in Venezuela,” says Zoraida Espinosa, 41, inside her tin-roofed home, surrounded by personal belongings neatly stacked and arranged. Seven years ago, middle-class and increasingly defiant of the populist government, Espinosa took part in protests against new Venezuelan programmes requiring young people to train for military service. She says she was harassed by government loyalists and struggled to buy food.

Over time, the food ran out, the medicine ran out, and she ended up in Alfonso Gómez. She finds sporadic work as a manicurist and serves in the leadership council headed by Pimento. “I don’t see the possibility of returning to Venezuela,” Espinsosa says. “My future is to keep working here.” 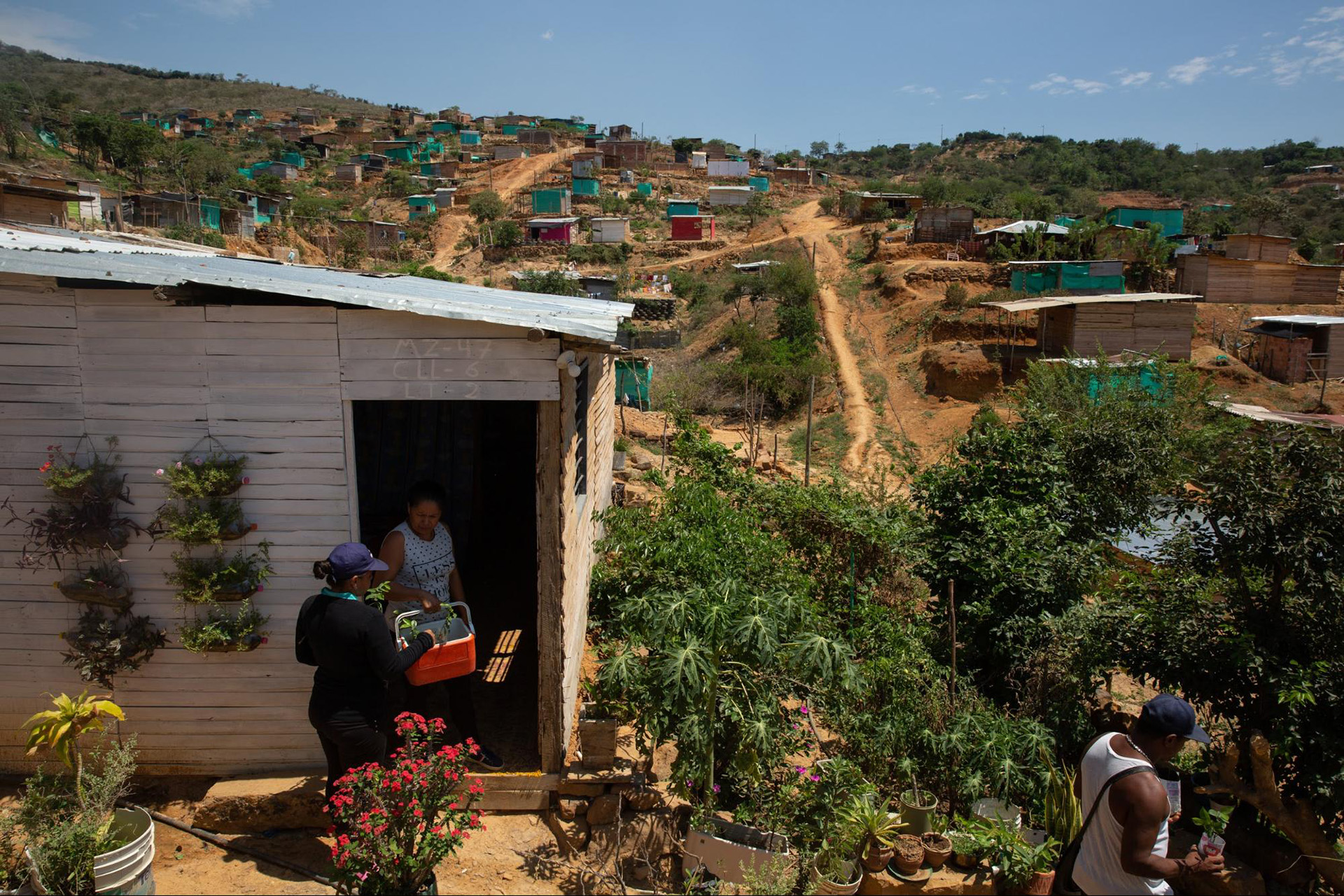 Espinosa hands out fruit tree saplings to Oriana Duran and other neighbours to plant near their houses. Espinosa, who has spent two years in Alfonso Gómez, tries to maintain a small but thriving garden in the neighbourhood. Some plants sprouted as seeds she saved from fruit. Others grew from sprigs she pinched off of plants in Cúcuta neighbourhoods, with or without the owner’s permission.

Espinosa also helps neighbours with their own plants. When one says he’s not sure if his tree will live, she says: “Make it survive; put wooden planks at its base so it doesn’t dry out.”

It will take a few years, she tells her neighbour in the sweltering heat, but eventually the tree will bring precious shade.