Conflict
Ethiopia
First Person
Editor’s note: Lucy Kassa is an Ethiopian journalist whose reporting on the war in Tigray has exposed massacres, sexual violence, man-made starvation, and other grave human rights abuses. She has been attacked and threatened for her work, but has refused to stay silent. Here, she reflects on the emotional toll of covering a conflict that has left hundreds of thousands of people on the brink of famine.
ETHIOPIA

This time last year, I used to feel sad when people died from COVID-19. Now, I don’t feel anything. I asked myself why I became so numb. It is because of the brutality I have come to know while reporting on this war.

At least those who die of COVID-19 usually get the dignity of a proper burial. Civilians in Tigray – the northern region of Ethiopia enveloped by conflict – are denied even that. Their dead bodies are left to be eaten by dogs and other wild animals.

When I was asked to write about how I am feeling after eight months of reporting on Tigray, I did not know where to start.

I have been overwhelmed with so many horrible stories that I have not allowed myself the time to process my own emotions: not even when government security officers raided my house and threatened to kill me on 8 February, shortly before I published a story about Tigrayan women being gang-raped.

There are people who think they can tire me out through harassment and defaming my name. But threats do not normally bother me. In fact, there are days when I feel so paranoid due to the trauma of the death threats from the government. But I have not let that frustrate me. I have always fought for the truth and the things I believe in. So far, nobody has been able to stop me.

The story that haunts me: ‘Keep walking or we will kill you and your other son’

Still, reporting on this war has eroded many things inside me.

A week does not pass without me hearing and writing about terrible things. Every time I start a new investigation, all I seem to find is more horror, more cruelty, more unimaginable evil.

This week, Ethiopia’s government announced a unilateral ceasefire as the rebel Tigray Defence Forces retook the regional capital, Mekelle. Some hope a dire humanitarian crisis may now be averted.

Much remains unclear though, and atrocities cannot be undone. I have documented many in recent months, but one in particular still makes my heart bleed and my eyes stream every time I recall it.

In January, a mother of a four-year-old boy was fleeing her home village in central Tigray when she crossed paths with Ethiopian soldiers. The little boy felt angry when he saw the troops and said to his mother: “Mummy, are these the ones who were bombing us with planes? Are these the friends of Abiy [Ethiopia’s prime minister] and Isaias [Eritrea’s president]? Why don't we just beat them with stones and go?” 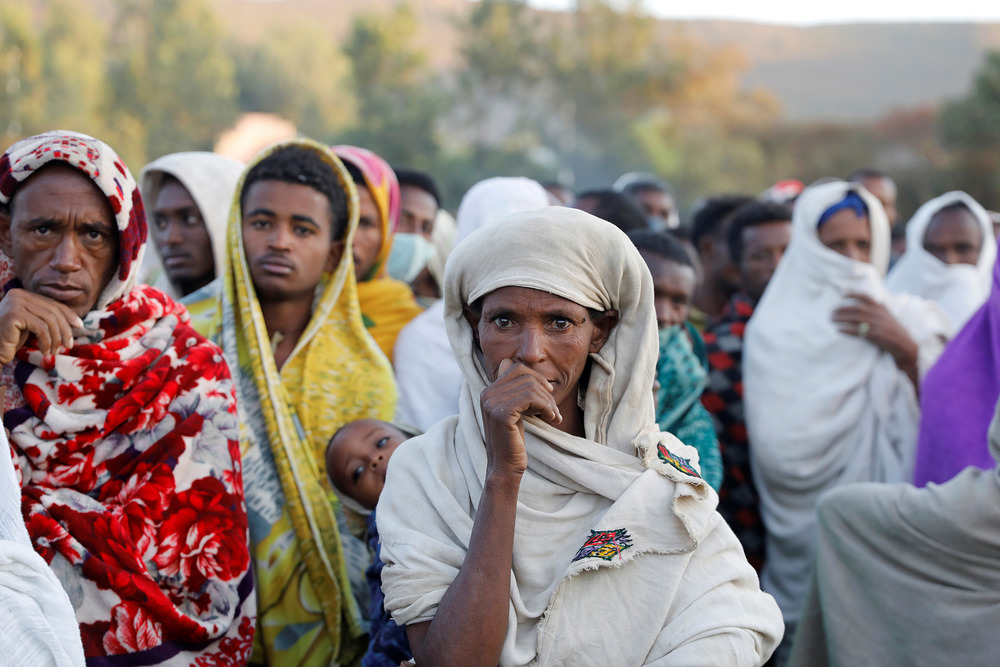 Baz Ratner/REUTERS
A woman stands in line to receive food donations, at a temporary shelter for people displaced by conflict, in the town of Shire, Tigray region, Ethiopia, 15 March, 2021.

The Ethiopian soldiers asked the mother to translate what her son had said from Tigrinya, the language of Tigray. Terrified, she replied that he had said nothing bad, while telling her son to stop sounding angry. “These are our brothers, my son – don’t speak like that,” she said.

But the soldiers suspected the little boy had said something bad. “If you at this age spoke to us like this, you will [take] revenge [on] us when you grow up,” they said, before shooting the boy dead.

The mother wept, cradling her son in her arms. She begged the soldiers to let her take the body. But the soldiers refused. “Keep walking or we will kill you and your other son as well,” they said.

This awful conflict began in November, when Ethiopia’s army – backed by troops from Eritrea and the neighbouring region of Amhara – clashed with Tigray’s rebellious ruling party, the Tigray People’s Liberation Front.

Nearly two million people have since been displaced, and hundreds of thousands are facing imminent famine. Journalists have uncovered massacre after massacre. Some like me have incurred the government’s wrath as a result.

I am a resilient person, so it took me a long time to admit that the stories I have written, the gang-raped women I have interviewed, and the horrific videos I have watched, have affected me greatly.

After talking with my sources, it is impossible for me to sit quietly. I cannot enjoy anything, even food. When I sleep, I sleep with guilt. And when I wake up, my mind is occupied by a feeling of worthlessness.

The view from my apartment’s balcony is beautiful. Every day, I tell myself I will sit and watch the sunset once I finish my work. But in the end, my mind is always too occupied with horrible stories to enjoy it.

I have been talking to witnesses and survivors almost every day since November. And I have published many investigations in the process. In May, I wrote for the Daily Telegraph about the possible use of white phosphorus on civilians by government forces.

There were videos we could not publish in the article because they are too graphic. It was extremely difficult for me to watch them: The disturbing wounds, the cries of pain, were just beyond words. I felt like it was happening to me.

In the days which followed, I could barely sleep. And when I woke up, I wished I had not. I spent the day after publication unable to get out of my bed, even to eat. All my mind could think about was the terrible wounds and sickening screams.

I had similar feelings when I reported for Al Jazeera about a gang-raped woman whose uterus was burned by a hot metal rod. She said her abusers – militia from the Amhara region – told her they did not want a Tigrayan womb to give birth.

I was short of words to describe her agony. The level of cruelty was hard for me to comprehend. How can people in this age become such barbarians? I cried.

Everywhere you look in Tigray, there are heart-breaking stories: Dead bodies half-eaten by dogs, emaciated children dying from man-made starvation. The misery is just endless.

I am not satisfied with reporting the crimes I have uncovered so far. I know that what I have exposed is just the tip of the iceberg.

I am not a politician nor an activist. I do not support any political group or hold any opinion. My duty as a journalist is to present the facts on the ground. It is not me that speaks: It is the truth which reveals itself through me.