See more related stories
Editor’s note: This analysis draws on Kniknie’s doctoral research, which focuses on political violence and urban protest in eastern DRC. Since January 2020, Kniknie has conducted over 100 interviews with Congolese activists and other stakeholders in the city of Goma. He follows social movements in the region and monitors their social media activities.
BRUSSELS

Last month, the president of the Democratic Republic of Congo’s senate, Modeste Bahati Lukwebo, called for the UN peacekeepers in the country to pack their bags after more than 20 years on the ground.

His fiery words led some to suggest that the violent anti-UN protests that kicked off ten days later in major cities across eastern parts of the country were the work of high-ranking politicians.

That is a problematic simplification: Depicting protesters as manipulated or paid for by politicians denies their agency and ignores the profound frustration many Congolese have with the UN peacekeeping mission in DRC, which is known by its French acronym, MONUSCO.

A better explanation for the protests should start with an analysis of current political events. Specifically, one must look at the resurgence of the once-dormant M23 armed group, which a leaked UN report indicates is being backed by neighbouring Rwanda.

MONUSCO’s perceived inaction on the crisis – which has now displaced nearly 200,000 people – and its failure to clearly denounce Rwanda’s presence on Congolese soil has caused a great deal of local frustration. 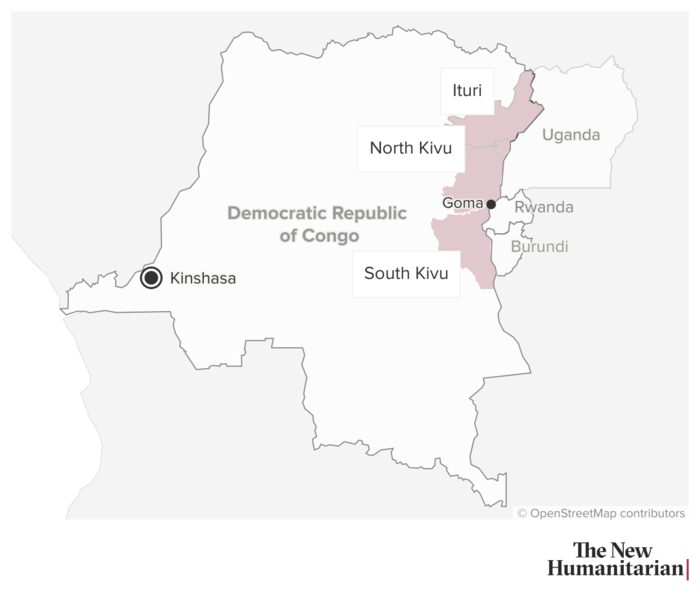 Rwanda’s involvement in the crisis has also revived a nationalist discourse that has MONUSCO in its crosshairs. Protesters have been voicing support for the Congolese army, while denouncing various foreign armed actors operating in the country.

Distrust of outside actors has deep roots in DRC. From Belgian King Leopold II’s rubber regime to the illegal export of minerals today, the country is seen as a playground for colonial and neo-colonial forces seeking to enrich themselves.

Instead of easing current tensions with civilians, peacekeepers have inflamed the situation. They have shot at protesters and other unarmed civilians, leaving scores dead. This has confirmed the negative image many people already had of the mission.

If MONUSCO really wants to improve its image and use the rest of its mandate to fight armed groups – instead of angry civilians – it should start by listening to the genuine grievances of the Congolese population.

MONUSCO, and its predecessor mission (MONUC), have operated in DRC since 1999. It is the most expensive peace operation in UN history. However, it has consistently struggled to protect civilians, leading to several waves of protests in recent years.

Demonstrations tend to take place in urban areas, where the stark contrast between the lives of local inhabitants and the expatriate world of the UN reinforces the feeling that MONUSCO is not defending Congolese interests.

As columns of white UN pickups drive to fancy lakeside restaurants and nightclubs in places like Goma – the largest city in the east – people on the side of the road are left to wonder where all of the money is really going.

The relative comfort of expats – especially when compared to the difficult living conditions of army soldiers – makes people think that peacekeepers are in DRC for their own economic interest, rather than to bring peace.

As columns of white UN pickups drive to fancy lakeside restaurants... people on the side of the road are left to wonder where all of the money is really going.

A recent WhatsApp message on a group used by many of the protest organisers illustrates this point: “The misfortune of the Congolese people pleases [the peacekeepers] because it gives them a reason to make more money and stay in the DRC for tourism in the name of protection of civilians.”

Comments like this are also rooted in longer-standing perceptions of foreign actors pillaging DRC’s wealth. The image of the 'thieving white man' has become entrenched in the consciousness of many Congolese. MONUSCO is unable to escape it.

As one of the organisers of the protests wrote recently on Facebook: “Next Monday, the demonstrations begin, and they will last until the departure of the whites of the UN who enrich themselves on Congolese soil.”

Some level of elite manipulation may have played a role in sparking the current protests. Popular anger at MONUSCO is, after all, a welcome distraction for political elites keen to hide their own shortcomings.

Still, protesters have been critical of the Congolese government – not just MONUSCO. On social media, they have questioned politicians for renewing the mission’s mandate and for arresting their comrades during previous anti-UN protests.

The protesters also did not need to be pushed much to demonstrate their outrage. Anti-UN sentiment was already rising significantly amid the M23 crisis and renewed tensions between DRC and Rwanda.

The M23 rebels – who claim to defend the interests of Rwandese-speaking communities in Congo – are reportedly receiving direct military support from Kigali, which has intervened repeatedly in DRC since the 1990s.

Yet MONUSCO failed to publicly censure Rwanda’s presence on Congolese soil at a Security Council meeting in late June. This is despite the fact that Rwanda’s involvement was crystal clear to large parts of the Congolese population.

The tacit support of Western states for Rwandan President Paul Kagame, and the UK’s refugee deal with Kigali, reinforces a belief that the international community – and by extension MONUSCO – is not on DRC’s side in this conflict.

Recent comments by the UN’s special envoy for the Great Lakes Region, Huang Xia, are another source of frustration. Instead of condemning Rwanda, the Chinese diplomat called for talks between the conflicting parties.

The tacit support of Western states for Rwandan President Paul Kagame... reinforces a belief that the international community – and by extension MONUSCO – is not on DRC’s side in this conflict.

Many Congolese now accuse MONUSCO of supporting the rebels. “MONUSCO and the UN are allies of M23 and Rwanda,” one activist recently wrote on social media. “That’s why they force the Congolese government to negotiate with the terrorists.”

The allegations of UN collaboration with M23 and Rwanda are in all likelihood false. But their spread demonstrates the distrust that many protesters have of foreign armed actors seen as detrimental to Congolese sovereignty.

The challenge for MONUSCO now lies in showing that they are willing to come out of their compounds to talk with people they are supposedly protecting and in debunking the false myths that are circulating.

MONUSCO will have to address other grievances too. Many of the participants and social movements involved in the demonstrations have ties to the eastern regions of Beni and Butembo, where the Nande community originates.

This region suffered the worst of the poorly managed 2018-2020 Ebola epidemic. And residents there have also suffered from several years of violent attacks by the Allied Democratic Forces – one of the deadliest armed groups in eastern DRC.

They reason that if the UN really wanted to end the violence, given its vast means, it would already have done so.

Many Nande see these dynamics as part of a conspiracy against them – one the government and MONUSCO are both complicit in. They reason that if the UN really wanted to end the violence, given its vast means, it would already have done so.

These broader cultural dynamics of ethnic solidarity and belonging are important elements to the protest movement. They also again show the limitations of viewing demonstrations through the narrow prism of elite manipulation.

MONUSCO’s departure does not yet seem imminent. But if nothing changes, and popular objections are not taken into account by the mission, protests will continue to happen.

While no easy solution is in sight, the mission should start by listening to the protesters. Hiding behind the mandate it receives from the Congolese government is unlikely to do any good, since the government itself faces severe legitimacy challenges.

The mission should also try to deal with the realpolitik of Western states that are unwilling to denounce Rwanda’s involvement in the M23 crisis, which has already cost dozens of civilian lives.

The mission should start a deeper reflection on what peacekeeping looks like in a post-colonial world.

That may prove easier after the recently leaked report from the UN’s Group of Experts, which unequivocally showed Rwanda’s support for the rebels. This pushed US Secretary of State Antony Blinken to raise the issue in a meeting with Kagame earlier this month.

Finally, the mission should start a deeper reflection on what peacekeeping looks like in a post-colonial world, where foreign involvement brings up memories of colonial and neo-colonial interference.

That means actively trying to counter the image that MONUSCO is solely present for self-interest. And it means reaching out to residents to ask how they think peacekeepers should do their job while respecting Congolese sovereignty.