Snatched schoolgirls and suicide bomb blasts have long been the enduring images of Nigeria’s Boko Haram conflict. But now the violence is represented by thousands of new faces: those of starving children.

Scenes like these haven’t been seen here since the 1967-70 war with secessionist Biafra.

As many as 4.5 million people need food aid in the northeast of the country, according to the UN’s World Food Programme. It warns that “famine-like conditions” may be occurring in remote pockets of the region.

Food shortages are the inevitable consequence of the seven-year insurgency that has displaced more than 2.5 million people.

Several planting seasons have passed with little farming activity in the affected states of Borno, Yobe, and Adamawa. The conflict areas are hard to reach, but reports hint at the deliberate destruction of farm production by both sides, as well as the targeting of civilians.

The Nigerian government’s focus on an almost exclusively military response has Boko Haram on the run. With the help of neighbouring countries – Chad, Cameroon, and Niger – most of the territory previously held by the insurgents has been recovered.

But one major problem is that this military success has not been accompanied by a rigorous de-mining programme. Fear of Boko Haram mines means far from all the land is back in production, in what is an agriculturally rich region.

The insurgents are also an ever-present threat in the countryside, beyond the villages and towns. That has limited the humanitarian response to this crisis, as well as the return of government services.

Fearing infiltration, the authorities have severely restricted movement around the settlements they have recaptured. Residents, mostly women and children, have been evacuated into camps strictly supervised by security forces. That has had a severe impact on the rural economy, along with people’s freedom of movement.

Take Baga, a fishing settlement in northern Borno State, for example. It was recovered by government forces in April 2015, after its near-destruction by Boko Haram. But because of the security restrictions imposed by the army, fishing has ground to a halt and trade with local communities is prevented. Baga is running out of food.

The displacement camps and temporary settlements in Borno, most of them crammed into the state capital, Maiduguri, have become huge internment centers. Food supplies from the meagre harvests in areas less affected by the conflict and relief materials donated by international and local aid organisations fall woefully short of the needs of the displaced population.

As though the problems posed by the shortages are not bad enough, the distribution of relief material is fraught with allegations of corruption, mismanagement, fraud, and outright theft by government officials.

And rather than conducting transparent investigations and addressing the problems, the federal and state authorities in charge of the camps have issued blanket and vague denials. 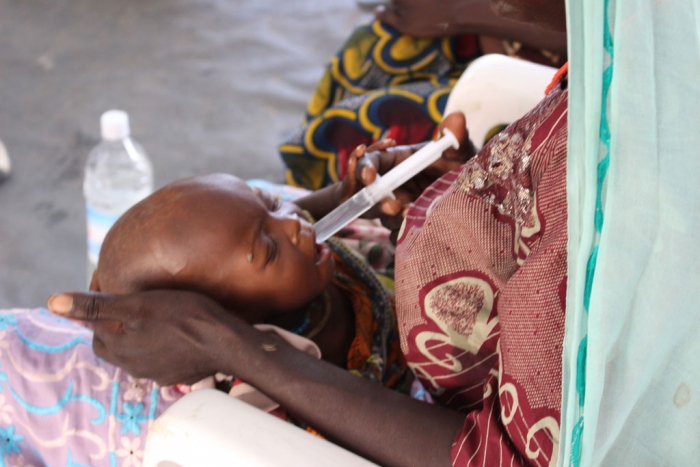 OCHA/O.Fagan
A severely malnourished child receives treatment in a clinic in Banki

In July, a state official in Maiduguri told me that she could not discuss the food supply for displaced people because the government had declared the issue a “state secret”.

That response echoes the National Emergency Management Agency’s denial of a Médecins Sans Frontières report highlighting the health crisis in June among the displaced in the town of Bama, where it said up to 30 people were dying daily from hunger and disease.

The head of NEMA, the federal agency responsible for responding to internal crises, accused MSFof using the report as a ploy to attract donor funding.

It was therefore gratifying to see the federal government respond quickly and positively to a Human Rights Watch report that detailed the sexual exploitation and abuse of displaced women and girls by government officials. Police and intelligence officers were swiftly deployed to investigate.

This response should set the tone for improved conduct by all officials tasked with protecting and supporting displaced people. It presents a great opportunity to institutionalise reforms in the vetting and training of staff, reforms that prioritise accountability.

Aid programming must include gender and human rights awareness, and allow for the thorough monitoring and investigation of abuse and misconduct, including in food distribution.

There is still a long way to go. The latest news from Maiduguri is that the state authorities – apparently unhappy about the negative publicity that followed the sexual abuse report – have tightened restrictions around the camps.

Rather than encouraging the protection of the rights of the displaced, the authorities have presented local and international aid providers with new requirements for their continued operations in Borno.

Nigeria is Africa’s richest country, but it needs all the help it can muster to surmount the scale of this humanitarian tragedy. An international aid appeal for $488 million is only 37 percent funded.

The people whose lives depend on this aid have a right to demand a more honest and robust response when concerns are raised over the mismanagement of relief.

Transparency and accountability must be non-negotiable.