Sudan’s fragile transitional government is in the spotlight today as a “millions march” protest took to the streets of Khartoum to voice frustration over the lack of progress on promised reforms – nearly a year after mass demonstrations forced the military to share power with civilian leaders.

The protesters are angry over rocketing inflation and shortages of fuel, electricity, and basic commodities, but are also giving voice to a deeper fear that the military has retained its power and out-maneuvered the civilian-led government of Prime Minister Abdullah Hamdok.

“The revolution is at risk,” said Hussam Ali, a member of a Khartoum resistance committee – the neighbourhood groups that were at the forefront of last year’s protests. “We feel that the military has arranged its cards and still has greed for power.”

"I took to the street today because I want to see peace first, and then all criminals who are wanted by the ICC [the International Court] handed over, including [Omar al-] Bashir [Sudan’s three-decade-long former ruler],” said Ahmed Abdulkarem, a protester in Khartoum. “The government’s performance has been very slow and is doing nothing.”

The three-year transitional arrangement agreed last August between the generals and the umbrella opposition Forces for Freedom and Change (FFC) was a compromise after eight months of protests, in which more than 200 people were killed by security forces.

The demand was for change in a country in which the conflicts pursued by al-Bashir, climate change, and a cratering economy had left more than nine million people in need of aid and driven over a million people from their homes.

Rather than risking more civilian deaths, the FFC gambled that its ultimate goal of democratic change and economic reform could be achieved through a new technocrat-led government and a tactic of “tajility” – a play on the Arabic word for delay – rather than directly confronting the generals.

Read more → A year after al-Bashir’s ouster, cash-strapped Sudan too broke for peace

But activists are now demanding the government honour its commitments to create a transitional parliament that represents all regions of the country; appoint civilian governors; finalise peace deals; and hold those responsible for ordering the killing of protestors to account.

Despite squabbles within the FFC over policy direction and the competition for political jobs, “the revolution continues and its power is still alive,” said Sara, a university medical student, who was on the frontlines of last year's mass demonstrations and gave only her first name out of security concerns.

“The revolution continues and its power is still alive.”

Hamdok, a former senior UN official, faces multiple threats. Aside from the generals, he has enemies among hardline Islamists and the supporters of al-Bashir, unseated by a coup last April. That old deep state – the so-called “Kizan” – still has loyalists in the military and the national security apparatus.

An assassination attempt on Hamdok in March underlines just how deadly such threats can be. This briefing looks at the challenges facing the transitional government in the months ahead.

Economic fragility and a near-bankrupt government

The economy is seen as the critical issue for the near-bankrupt administration, undermining its ability to provide for its vulnerable citizens. The economy is expected to shrink by eight percent this year, inflation is already running at 100 percent, and the exchequer is facing a funding gap of $1.5 billion to $2 billion.

Ahead of an aid pledging meeting last week that was sponsored by the United Nations, European Union, and German government and dubbed “Partners Forum for Sudan”, the International Crisis Group called on donors to provide urgent assistance or risk the collapse of the interim government under the weight of citizen’s frustrated expectations.

Sudan did secure around $1.8 billion in aid pledges and $400 million in World Bank grants at the meeting – applauded as a valuable demonstration of political support. But in real dollar terms there are questions over how much of the commitment was actually new money, and a large slice of the aid seems to be in-kind support for the COVID-19 response.

Winning donor backing entails putting in place painful economic reforms, including removing fuel and wheat subsidies. They are a heavy drain on government spending but provide some relief – albeit poorly targeted – for the 65 percent of Sudan’s 44 million people who live in poverty.

The government has made a start on liberalising fuel, but it’s battling cartels run by functionaries of the old order who profit from the subsidies – all part of a shadow economy over which the government has had little control.

To cushion the impact of the reforms, the government has launched a flagship safety net scheme. Its “family assistance programme” aims to provide 80 percent of the population with a modest $5 a month, at an estimated cost of $1.9 billion – more than the donors pledged at last week’s conference.

The priority areas for the rollout are Sudan’s poorest regions. But that poses challenges for compiling an accurate database of those in need. “I'm afraid my part of the country is not part of the database,” said Gibril Ibrahim Mohammed, leader of Darfur’s opposition Justice and Equality Movement. That could “worsen existing disparities,” he told TNH.

Military-run companies dominate the economy, but none of the profits – estimated at $2 billion annually – reach the treasury, according to Finance Minister Ibrahim al-Badawi. That could now change. The government said on Sunday that it would take over all state firms – including those owned by the security forces – as part of an International Monetary Fund-monitored programme, which would dent the influence of the shadow state.

An even bigger relief for Sudan would be if it could get help on rescheduling the arrears on the $60 billion it owes lenders. A first step would be if Washington removes Sudan from a list of state sponsors of terrorism – a designation that compels the US to vote against debt relief at the World Bank and the IMF. So far, the US administration has shown little inclination to fast-track the process.

The military derives some of its clout from the five seats it holds on the 11-member Sovereign Council, chaired by General Abdel Fattah al-Burhan – the de facto head of state. Also on the council is the arguably even more powerful General Mohamed “Hemeti” Dagalo, who heads the notorious paramilitary Rapid Support Forces (RSF).

It was Hemeti’s men who killed more than 100 civilians and gang-raped at least 60 women on 3 June 2019 in Khartoum, in an attempt to crush the pro-democracy movement – and so far he has escaped legal action.

“Our first request is justice for our martyrs,” said Ahmed, a resistance committee member in the Khartoum district of Burri, one the hotspots of the uprising. “We demand accountability and reparations for the victims.”

But Hemeti’s influence is growing. The RSF is seen as a rival to the regular army, and its deployment to the wars in Yemen and Libya has cemented support for Hemeti from among the Gulf states – one of a number of foreign influences on the transition.

“Our first request is justice for our martyrs. We demand accountability and reparations for the victims.”

The former warlord also retains a major stake in the poorly regulated gold business. The profits from gold mines he seized in the western Darfur region are substantial enough for him to pledge last year to donate $1 billion to the central bank, according to a Global Witness investigation.

The RSF now presents itself as the public’s protector in the fight against COVID-19, running a quarantine centre, disinfecting the streets, and providing free medical advice. With a Canada-based lobbying firm, Dickens & Madson, helping to boost his image, some believe Hemeti is preparing for an election run in 2022.

That complicates the work of Nabil Adib, the rights lawyer who is leading the government investigation into the massacre last June. He recently admitted his committee is starved of funds, and Sudan’s judiciary may not even be up to the task of ensuring a fair trial when members of security forces are involved.

“Sudan has not had an independent, impartial, and transparent judiciary for the past 30 years,” Musad Mohamed Ali, the executive director of the US-based African Centre for Justice and Peace Studies, told TNH. “It lacks practical experience in human rights violations.” 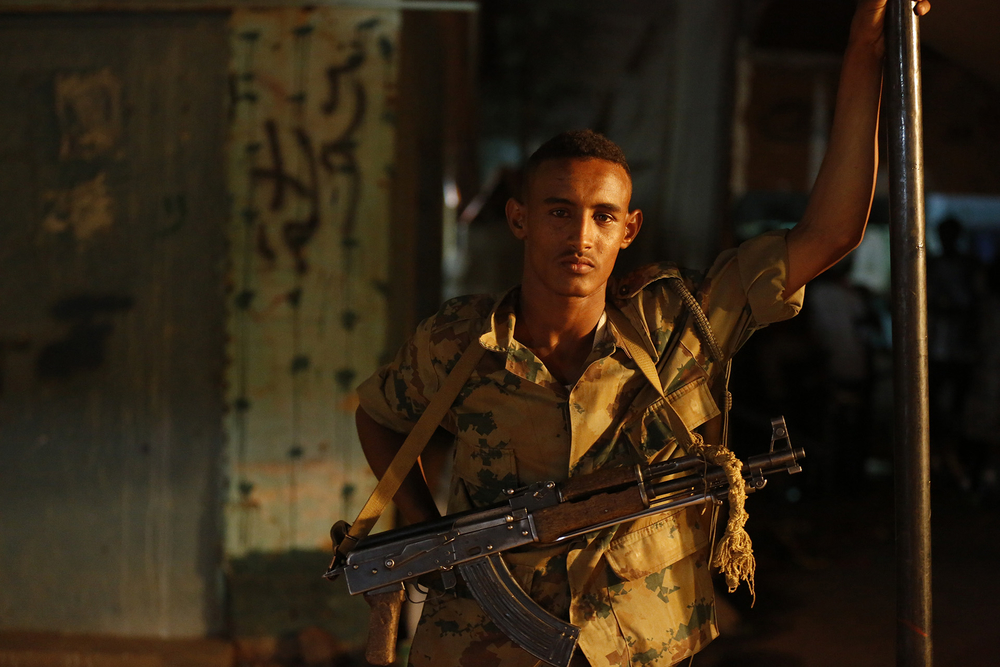 Sara Creta/TNH
A Sudanese soldier stands guard outside the army headquarters during a street protest in Khartoum in August 2019. Activists fear that the army might hijack the transition to preserve its privileges.

A key goal of the transitional government is to end the historical conflicts waged in Darfur, Blue Nile, and South Kordofan by armed groups demanding political recognition – and an end to the marginalisation of these “periphery regions”.

Peace talks between the government and the umbrella Sudan Revolutionary Front (SRF) – which groups the armed opposition – began in Juba, South Sudan, last year and initially went well, but momentum stalled amid haggling over government positions.

Negotiations are now underway in Khartoum, but some key outstanding issues remain. They include how many seats the groups will get in the future transitional assembly and the timeframe for the integration of their men into the national army — at the moment seen as taking around four years.

With all sides under domestic and international pressure, there has been reported agreement this week on the number of seats they will be allotted on the Sovereign Council and ministries to be assigned to the SRF.

Both men are especially wary of the intentions of the military. But while al-Hilu has pursued separate talks with the government, fighting has continued in Wahid’s enclave in the Jebel Marra mountains.

Despite a string of deadly attacks in Darfur this year, sparked by land and identity disputes, the hybrid African Union-UN peacekeeping operation known as UNAMID is set to withdraw. That decision is seen as premature by the SRF and African diplomats on the UN Security Council.

UNAMID has been heavily criticised in the past, both by human rights groups over its inability to prevent violence and by the former regime in Khartoum, which regarded the peacekeepers as an unwelcome observer of its military operations in the region.

Nevertheless, Hamdok had at the beginning of the year asked the UN Security Council to launch an expanded UN peacekeeping mission for the entire country, but was forced to backtrack by the Sovereign Council.

UNAMID is due to be replaced by the UN Integrated Transition Assistance Mission in Sudan – to be known as UNITAMS – a far more political mission with a peacebuilding mandate.

However, no date has yet been set for the winding up of UNAMID. A special report is due on 31 October from the UN secretary-general and the chair of the African Union Commission, and that will determine the final decision.