At a glance: Darfur’s troubles

Sudan’s revolution, which last year ended the three-decade rule of Omar al-Bashir, is yet to be fully felt in troubled western Darfur, where heavily-armed militia still terrorise civilians, hold on to land they have seized, and make reconciliation harder.

“The ruling party fell, but it is still the same behaviour from the militias,” said Hassan Sabber, gloomily rattling off a list of places where he claimed fellow victims of Darfur’s 16-year conflict had been attacked, raped, and killed by armed tribesmen.

In the most recent violence last month, at least 54 people were killed. It began at the end of December with a raid by Arab gunmen on a displaced persons camp following a local dispute, and spread to El Geneina, the capital of West Darfur state. Before order could be restored, 40,000 people had fled seven IDP camps, with thousands crossing the border into Chad.

It is a dispiriting sign after the success of the pro-democracy movement in bringing the ruling National Congress Party (NCP) to its knees, and then forcing the military in August to sign a power-sharing agreement, paving the way for an interim government and elections in two years time.

The new civilian-led government has dissolved the NCP, put al-Bashir on trial and promised a “comprehensive peace” in Darfur and other war-affected states within six months.

Bloody clashes between Darfur’s “Arab” and “African” tribes (ethnic classification is slippery) persist with alarming regularity; and inside the regional government the military remains in charge.

In Zamzam displacement camp in North Darfur state, a place where green farmland meets scrubby savannah, al-Bashir’s fall in April was greeted with jubilation. But optimism has turned to frustration as life shows little sign of the change that has swept through Khartoum, the capital, and other parts of Sudan since the revolution.

IDPs across the state have taken matters into their own hands in recent weeks, expelling their own administrators – who they see as working for the NCP – demonstrating against Darfur’s governors, and petitioning the new civilian-led government in Khartoum to bring peace and democracy to their region.

When asked if they thought they might now return to their old homes, all those interviewed by the The New Humanitarian in camps near the city of El Fasher in North Darfur said it was still much too dangerous. 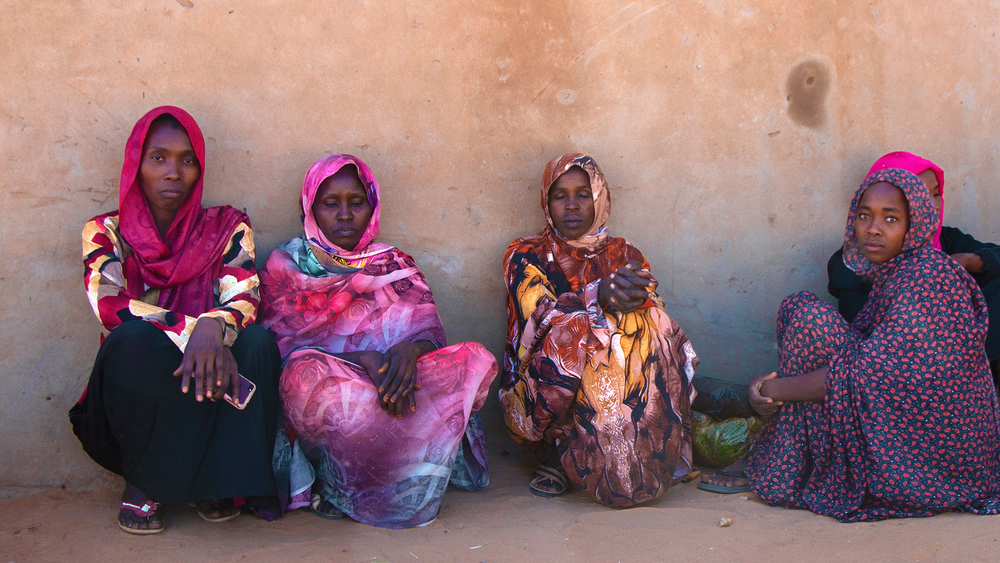 Tom Gardner/TNH
In Zamzam, a camp for internally displaced people in North Darfur, optimism has turned to frustration as life shows little sign of change since the revolution.

All blamed what they called the “Janjaweed” for their plight.

The Janjaweed (“devils on horseback”) were Arab militias armed and trained by al-Bashir’s government to crush a rebellion against the central government that broke out in Darfur in 2003.

They were unleashed on ethnic African communities associated with the rebels with such fury that in 2010 the International Criminal Court (ICC) indicted al-Bashir on charges of genocide. An estimated 300,00 people were killed and more than two million driven from their homes by the conflict.

The campaign of murder and ethnic cleansing also flipped Darfur’s long-standing settlement and demographic patterns, as nomadic Arab camel-herders associated with the Janjaweed took over lands belonging to predominantly black African farmers and settled there. Most of the land remains occupied by Arab herders.

Peace talks between rebels and the government restarted last month, and a ceasefire is being observed. But the unresolved problems of land occupation and armed militias – as well as the chronic lack of trust between Darfuris and Khartoum – all threaten to derail progress.

“Every day, you hear about conflict,” said Mohammed Ibrahim, a resident of El Fasher who works for the UN peacekeeping mission based there.

On 27 December, hundreds of armed men also raided and looted a former UN camp in South Darfur state, according to the UN. 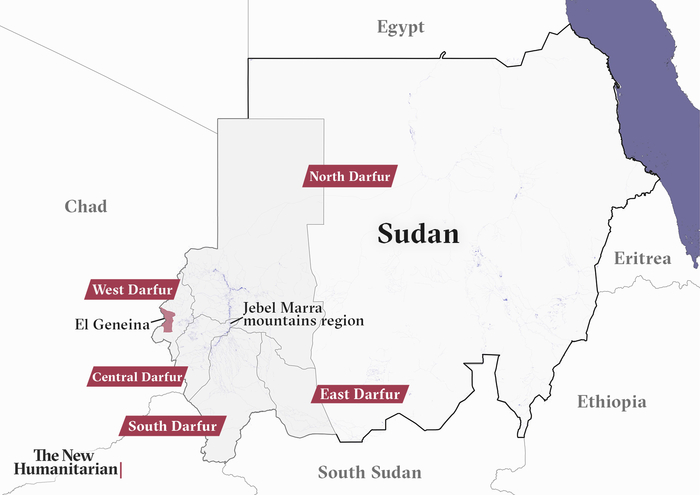 Amnesty International published evidence in June of continuing “scorched-earth tactics” in Darfur, in particular in the mountainous Jebel Marra district, by Sudanese government troops – including the Rapid Support Forces (RSF), a paramilitary group that grew out of the Janjaweed and is accused of committing crimes against humanity in both Darfur and, earlier this year, in Khartoum.

The commander of the RSF, Mohamed Hamdan Dagalo ("Hemetti"), is a senior figure within the new ruling interim Sovereignty Council.

Today, Darfur is crawling with RSF troops, who patrol towns like El Fasher in armoured trucks bristling with mounted machine guns. But IDPs say they do little to protect them from the Arab tribes who occupy their lands.

Once a year, Adin Idriss travels from Zamzam to his old farm with a group of 30 or so other men, all of them unarmed, to try and collect his harvest.

“It is impossible to go alone,” the 48 year-old told TNH in a tea shop at the camp.

Idriss fled his village with his wife and 10 children in 2003 when the Janjaweed first arrived, abandoning the 12 hectares of farmland on which he grew wheat, corn, and tobacco. That year his brother was killed. 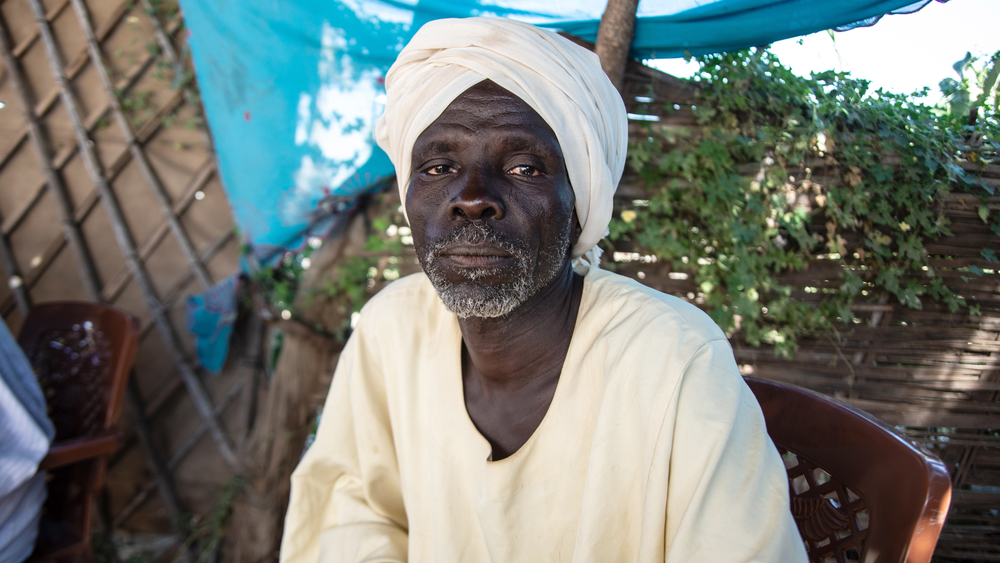 Tom Gardner/TNH
Adin Idriss, one of countless civilians displaced by Darfur's 16-year war, in a camp for the displaced near the city of El Fasher.

At the time he spoke with TNH, he had returned to Zamzam a day earlier, having found his land in West Darfur still occupied.

“They were living on the farm with their camels and weapons and their military vehicles,” he said. “They took half of my harvest. If you speak and resist they will threaten you or even kill you.”

“The government is doing nothing to stop this,” he added, noting that he could not arm himself in self-defence without risking arrest. “We are all unarmed – that is the policy of the government towards the African tribes.”

Previous peace agreements, including one struck in Doha in 2011, have included promises of disarmament as well as plans for IDPs to return to their lands.

“We cannot build a democracy if we have militias everywhere – we have to disarm all militias and build one armed force for all the country,” said Usher Abdul Aziz, one of the leaders of the Justice and Equality Movement, a Darfuri rebel group.

But previous efforts foundered on a lack of buy-in from the main rebel movements, and the unwillingness of the government to implement these provisions.

Jeremiah Mamabolo, who heads the UN’s operation in Darfur, is optimistic a comprehensive peace agreement could be agreed by early this year.

“Most of the contentious issues are no longer contentious,” he told TNH. “And the biggest obstacle – the regime of Omar al-Bashir – has been removed.”

The new government, meanwhile, insists that this time IDPs will be able to go home for good.

“Everybody shall return to his land,” Suleiman Debeilo, the government’s newly appointed peace commissioner, told TNH. “That is our stand now.”

The Darfur Land Commission is currently drafting a report into issues around land – including on occupation, registration, and animal migration routes – which will be presented to the new parliament in Khartoum when it convenes. No date has yet been agreed.

But Mamabolo noted that the fundamental question of land restitution for IDPs remains as vexing as ever.

“It’s not easy – how do you do it?” he asked. “The land is occupied by people who were placed there by the government itself.”

A UN official, who asked to remain anonymous because he was not authorised to comment to the media, said “conflict would break out again” if all the IDPs returned.

He said that in 2018 some IDPs began returning to their homes following a reasonably effective disarmament push led by the RSF.

But this quickly sparked violent opposition from the camel-herders who had settled in these areas.

Sacrificing the right to return?

According to Tufts University’s Alex de Waal, a leading expert on Darfur’s war, part of the solution may involve accepting that, while IDPs should have the right to return, “the settlement patterns and demographics in Darfur have changed for good”.

“What happened in the Darfur war was a process of dramatic and accelerated urbanisation,” he explained. “The IDPs are now, in one way or another, urbanised.”

Displacement camps, for instance, increasingly resemble towns: Zamzam is now a bustling market centre with shops, internet cafés, and hardware stores, while Abu Shuk – a camp on the other side of El Fasher – blends almost seamlessly into the rest of the city.

“The situation of the poorest nomads is as bad if not worse than that of the IDPs.”

Not all IDPs wish to return home, though the right to do so remains a central demand of the rebel movements in the talks.

Finding ways to support the poor Arab tribes as well as the IDPs should be a critical part of any recovery process and peace settlement, argued Helen Young, also of Tufts University.

“The situation of the poorest nomads is as bad if not worse than that of the IDPs,” she told TNH. “Any intervention in Darfur needs to take a holistic view and improve equity across the board. We need to think about how we protect the rights of all users of natural resources.”

Arrangements that allow both groups to share and benefit from Darfur’s resources, including land, are even more important as climate change and shifting patterns of land ownership, driven by urbanisation and privatisation, shrink supply.

“Today, there is much, much less land available,” explained Young. “Not just because of increased population numbers, but also because the best land has been privatised and bought by small urban investors.”

Meanwhile, back in Abu Shuk camp, scepticism towards the new government is mounting.

Abdu Alrahman, an elder, said a petition they had sent to Khartoum had still not received a reply.

“There has been no change,” he said. “We sent our demands to the new government – for more education, food, and for weapons to be collected from the militias – but no response.”

Referring to the new civilian prime minister, Abdalla Hamdok, he added: “If he doesn’t implement these demands, then – we’re not with him.”