Severe flooding in South Sudan has affected close to a million people, threatening to reverse some of the humanitarian gains made during a year-long ceasefire in the country’s civil war, aid workers and UN officials say.

An estimated 420,000 people have been directly displaced by abnormally heavy seasonal flooding. Entire communities have been submerged, crops and livestock lost, with health centres and schools inundated – or in many cases turned into emergency shelters for people now made homeless.

“We have to respond to the people in need, to supply them with tarpaulins, water purification tablets, and food,” Alain Noudéhou, the UN’s emergency aid coordinator in South Sudan, told The New Humanitarian.

“If we don’t act quickly and in a targeted manner, the gains made in the past 12 months of stability will be set back.”

A government of national unity is due to be formed on 12 November, marking a formal end to a five-year conflict between President Salva Kiir and opposition leader Riek Machar – but the timetable has slipped and there have been calls for further delay.

The year-long ceasefire, however, has allowed aid agencies to reach parts of the country previously inaccessible due to fighting, which has killed almost 400,000 people.

The UN’s emergency aid coordination body, OCHA, said floods have hit a total of 32 counties in Jonglei, Upper Nile, Warrap, Eastern Equatoria, Northern Bahr el Ghazal, Unity, and Lakes – areas where more than three million people were already in need of assistance even before the rains.

The rains, which began in July, are expected to last another four to six weeks – causing yet more hardship for the estimated 908,000 people so-far affected by the rising waters.

In Pibor, one of the hardest-hit towns on the eastern border with Ethiopia, Médecins Sans Frontières said 90 percent of homes are underwater, including its health centre and compound – now knee-deep in mud and with no electricity.

People are concentrated on whatever high ground they can find, cut off from assistance.

“We are seeing more malaria cases, watery diarrhoea cases, and respiratory tract infections as a result of the flooding,” said Edi Atte, MSF’s emergency coordinator. “The health condition of the people is deteriorating because they are drinking from open water sources.”

Atte told TNH that cholera was a real concern. “It’s something we fear. We have seen no cases yet, but it will come, I think.” 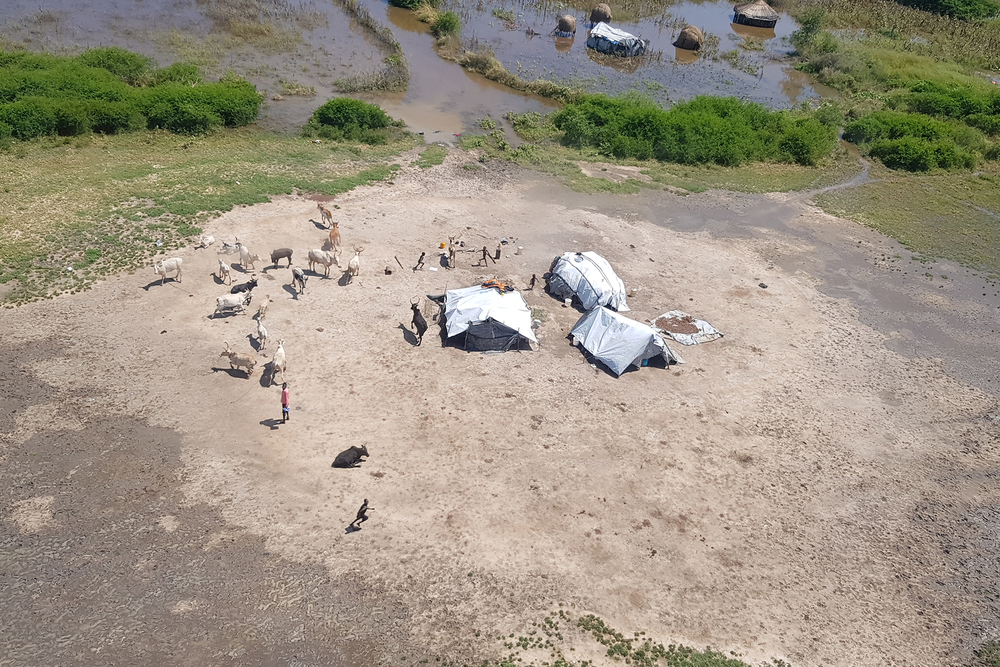 MSF
People and their livestock are sheltering on what high ground they can find in the Pibor area.

MSF noted in a statement on Monday that there were enough drugs in Pibor to last one week, but resupply could prove difficult as the helicopter landing zone is a thin strip of land surrounded by water.

Aid agencies have appealed for $35 million to cover the immediate flood needs. But Noudéhou, returning from an assessment mission on Tuesday to the Jonglei region, said disaster risk reduction – to be better prepared for future floods – should also be a priority.

“It may cost a bit more, but in the longer term it will help prevent future vulnerability [and reduce disaster response needs],” he told TNH.

The crisis will not be over once the water levels subside, which in the past has taken up to three months.

“The floods have worsened what was already a bad situation – people have lost everything, their belongings, their cattle,” said Atte. “Their conditions will be worse [when they return to their homes].”

There had been a marginal improvement this year in people’s food security. But 6.3 million people – more than half the population – still don’t know where their next meal will come from.

Among those are 10,000 people labelled as in “catastrophe”, a step away from famine, according to the latest update by the Integrated Food Security Phase Classification (IPC), a globally-accepted measure of nutrition needs.

The IPC has attributed the slight improvement in food security to the reduced violence following the signing of the peace deal in September last year, which led to improved access to rural markets for farmers, as well as a ramping up of aid supplies.

But there are still areas of localised conflict, and a failing economy has also dampened recovery, according to the IPC.

The UN says 594,000 displaced people have returned home since the peace agreement was signed – but a further 1.5 million displaced have preferred to adopt a wait-and-see attitude, and there are still 2.2 million refugees in neighbouring countries.

“People are moving back, but not at the rate that will change the course of the food production deficit,” said Noudéhou. “Recovery will take time.”

Members of the UN Security Council, on a visit to South Sudan earlier this month, urged the country’s leaders to settle the outstanding issues over the implementation of the peace agreement – which has stalled on disagreements over new states, their boundaries, and the reunification of the security forces.

This week, a spokesman for opposition leader Machar called for a six-month delay in the formation of a unity administration, blaming the government for the lack of progress in implementing the deal, and raising the spectre of the agreement’s collapse.

A power-sharing government was initially meant to have been inaugurated in May.

“We need to have continued stability in the country for all the humanitarian gains over the past 12 months to be consolidated,” said Noudéhou. “Not just for the politics of the country, but for its recovery.”