Now that the implementation of South Sudan’s shaky peace agreement has officially been delayed by six months, worries are mounting that a half year leaves enough time for things to go badly wrong in a country where distrust between the warring parties still runs deep.

In this briefing we explore the challenges faced by all sides in putting in place a deal to end a five-year conflict that has killed almost 400,000 people, displaced millions, and plunged pockets of the country into famine.

The delay to the peace plan means that instead of a transitional power-sharing government being installed on 12 May as stipulated by an agreement signed last September, opposition leader Riek Machar is now expected to return to the capital, Juba, in November to serve as President Salva Kiir’s deputy.

While the international community is lauding the parties’ ability to come to a consensus over the postponement, it has warned that progress must be made over the next six months and that another delay is out of the question.

Meanwhile, South Sudanese citizens are growing increasingly wary that the longer the fragile deal is delayed, the less likely peace will stick.

“I’m not comfortable with the extension,” said William Magok, who said he is dreaming of leaving his UN-protected displaced persons camp in Juba, where he has been living since 2013. “Now I’m afraid to leave because if I go, maybe something bad will happen… I don’t trust the government.”

Some 45,000 people are on the brink of starvation, which could worsen to “famine-like conditions” without assistance, the NRC warned. By July, almost seven million people – 60 percent of the population – could face extreme hunger.

“For most people in South Sudan [the delay] means extending the uncertainty of an unrealised peace and does little to change the humanitarian situation,” said Jeremy Taylor, East Africa analyst with the NRC. Without lasting peace, people remain reluctant to return to their homes, markets cannot recover, and many of the dynamics that complicate the distribution of aid will remain, he said.

What prompted the delay?

The eight-month pre-transitional phase of the peace deal was fraught with missed deadlines and a government “reluctant to share control of key parts of the political, security and economic landscape,” a report in April by a panel of experts appointed by the UN Security Council stated. The biggest stumbling block has been delays over the creation of a unified army, followed by lack of progress on security arrangements and setting state boundaries.

Angelina Teny, Machar’s wife, told TNH that the opposition has insisted it would be a “recipe for disaster” if Machar returned to Juba without adequate security in place.

The failure of a previous peace deal in August 2015 is largely attributed to the inadequate security arrangements. Machar returned to the capital in April 2016 with over 1,000 heavily armed bodyguards as part of a power-sharing deal, but fighting broke out three months later and Machar was forced to flee the country on foot.

“The peace deal’s security provisions in particular have remained a dead letter,” a report by the International Crisis Group noted in May.

In addition, according to the 2018 peace agreement, opposition and government forces are supposed to be cantoned and trained before unifying into a national army. There’s been little progress on that front. “Kiir’s army ignored provisions to demilitarise cities,” the International Crisis Group report stated. “There was no advance toward cantonment: Machar did not send his soldiers to camp.”

Instead, all sides have been accused of increasing recruitment in the past months. In January, 1,200 men in Twic State were press-ganged into the government army, according to a letter sent from community leaders to the governor and seen by TNH.

Read more → Note to humanitarians in South Sudan: Strengthen the group, not just the individual

South Sudan will soon enter the rainy season, which will make cantoning combatants even more challenging as travel becomes harder.

The issue of internal boundaries also remains unsettled. At independence in 2011, South Sudan had 10 states. But after signing the 2015 peace deal, Kiir increased the number to 28, which later became 32 states in what South Sudan experts say was intended to gerrymander boundaries along ethnic lines. Currently, neither side can agree on how many states should exist.

Who are the ‘peace spoilers’?

While fighting has largely subsided since September, clashes continue in pockets across the country, specifically in Central Equatoria State, where the National Salvation Front (NAS), one of the key non-signatory parties to the agreement, has a large presence.

It seems unlikely that NAS will change course. Its leader, Thomas Cirillo, has vowed to continue the “struggle” against what he calls a “suppressive” regime that has betrayed the South Sudanese people. Cirillo told TNH he wants the peace deal renegotiated.

Thousands of people have been displaced since January, many hiding in the bush and leaving civilians caught between the warring sides, without shelter or other basic needs. TNH spoke in February with dozens of people in Central Equatoria who said they had fled their homes when government soldiers attacked, ostensibly to weed out rebels.

During talks in Juba last week, regional foreign ministers said they would conduct “one final round” of talks with the handful of non-signatory groups to persuade them to join the peace process. The groups would “face consequences” if the talks were not successful, the ministers added. 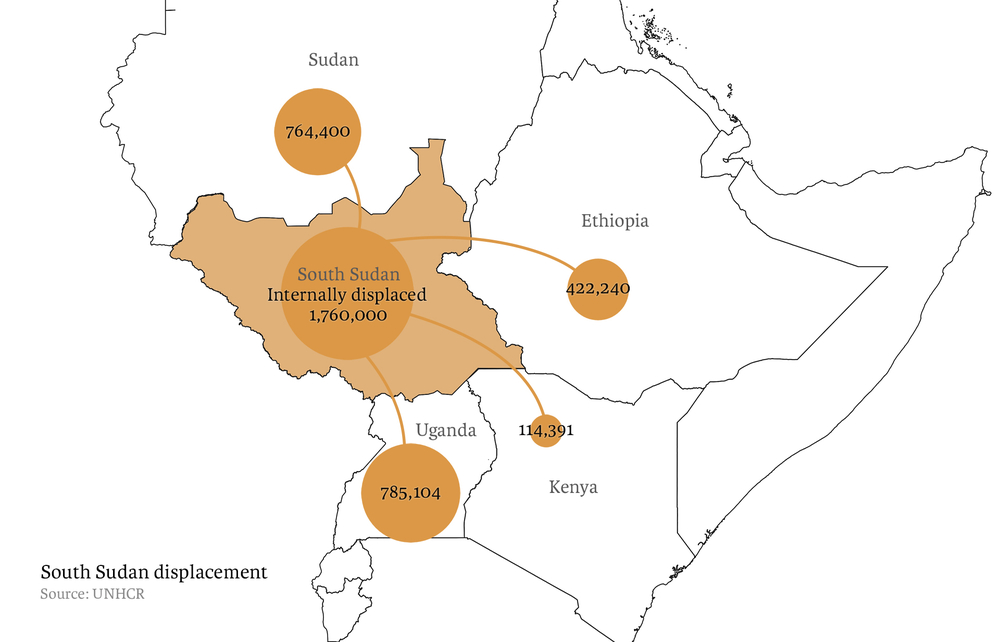 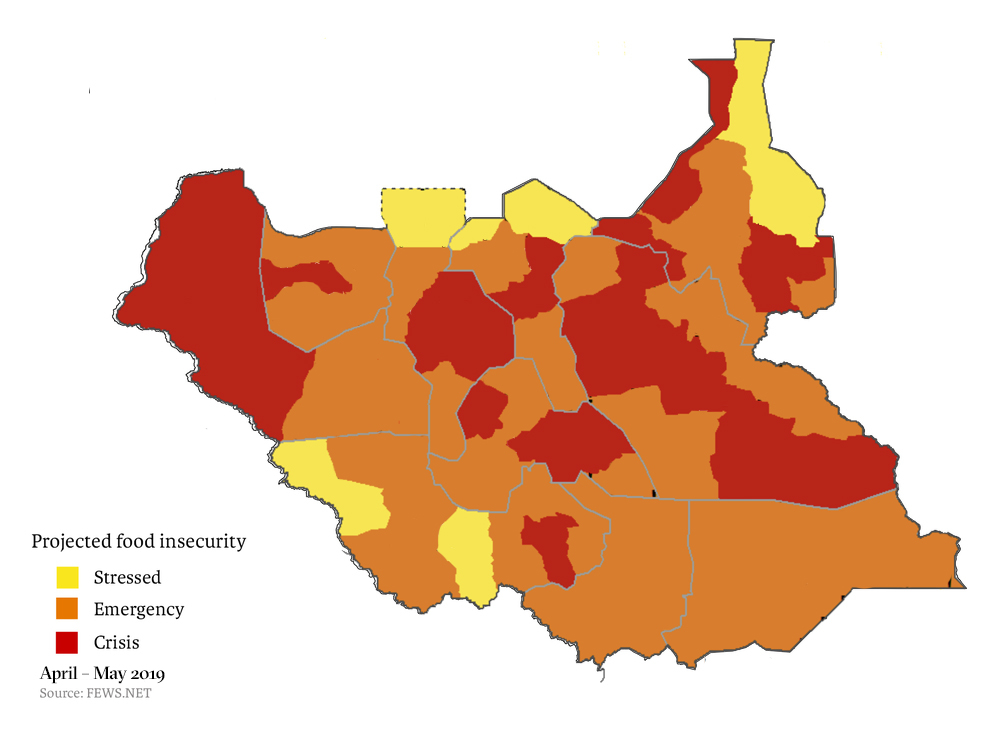 Is six months long enough to solve the problems?

Parties will need to chart a reasonable path forward on security that enables – rather than obstructs – progress on other aspects of the accord, said Alan Boswell, senior analyst with the International Crisis Group. But absent more engaged outside mediation, “we will likely be in much the same spot six months from now,” he added.

For its part, the government has pledged $100 million towards the deal’s initial implementation and will also attempt to fund “the whole peace process”, said information minister Michael Makuei.

This is a change of heart from the previous eight months, in which most of the $285 million budget for the pre-transitional phase went largely unfunded. The government instead allocated millions of dollars of peace funds towards cars and housing renovations for politicians, according to several internal documents seen by TNH, and since available on social media.

Yet some of the other signatories to the agreement remain skeptical, worried that a six-month extension might only increase the chances of setbacks.

“It’s unfortunate,” said Denay Chagor, chairman of the opposition South Sudan’s United Movement. “Four months is enough to get the security arrangements done, but six months is too much [and could lead to] another failure.”

What needs to happen?

Endemic distrust between the warring parties runs deep. To ensure that the deal moves ahead, confidence – particularly between Kiir and Machar – must be built, said South Sudan’s UN chief David Shearer at a press conference on 11 May.

In recent months, opposition and government forces have held confidence-building talks in Juba and across the country. But some South Sudan experts argue that no matter what happens in the next half year, nothing will change as long as Machar and Kiir remain at the helm.

“There’s no indication any of the parties are interested in genuine peace,” said Payton Knopf, advisor to the United States Institute of Peace and a former US diplomat. “Until that changes, or we move beyond a peace based on Salva [Kiir] and Riek [Machar], it will just be history repeating itself.”

Meanwhile, the African Union and the eight-nation Intergovernmental Authority on Development – the regional body leading the negotiations – have urged the government to release the $100 million as soon as possible.  They are also encouraging other countries to contribute to the peace process, which lacks funds, expertise, and institutional capacity.

What is the international community’s role?

The ousting in April of Sudan’s long-time dictator Omar al-Bashir, one of the main backers of South Sudan’s peace deal, has raised concerns of a diplomatic void and left the process “leaderless”, the International Crisis Group report noted. With no obvious candidates to guide the process, the burden will fall on regional countries as well as Western donors, specifically the European Union and the US, UK, and Norway – the troika that helped usher South Sudan to independence.

However, the international community’s patience is waning.

Western countries, which have been sceptical of the deal, warn that the next six months will be a “crucial test” of the government’s political will, especially as it relates to Juba releasing the pledged $100 million. Those funds need to be used with “transparency” and “accountability”, Norway’s ambassador to South Sudan, Lars Anderson, said at the meeting last week of regional ministers.

The African Union said this extension should be the last. “We are expecting the parties now to do every effort possible, every sacrifice, so that we have the transitional government in place next November,” said Smail Chergui, the African Union’s commissioner for peace and security.

(TOP PHOTO: Internally displaced people on the edge of a Protection of Civilians site near Malakal, South Sudan.)