As schools reopen this week in the Democratic Republic of Congo, the situation is worrisome for some two million children and their families in the Ebola outbreak zones in the east of the country.

Despite some promising new treatments and an effective vaccine, the disease continues to spread and consistently claim lives more than 13 months after the outbreak was declared in North Kivu province on 1 August, 2018.

Out of more than 2,050 people known to have died from Ebola so far, more than a third have been children. Young children under five have been hit particularly hard in this outbreak, the second deadliest since the virus was discovered in 1976.

Eastern Congo’s ongoing conflict and extreme poverty have only exacerbated the situation. More than 5.3 million children in Congo are malnourished, making them more vulnerable to Ebola, but also to other diseases, according to UNICEF.

Armed groups also pose a constant threat of attack or kidnapping, and hundreds of thousands of people have been displaced by violence this year alone. Children left upended by the outbreak can fall prey to the armed groups. According to UNICEF, there are more than 1,400 Ebola orphans – children who have lost one or more caregivers – and more than 2,600 children have been separated from their parents as the epidemic has progressed.

Here’s a look at how Ebola affects women and children and why they need specific attention in this response.

Are more women and children dying?

The short answer is yes. Children under 18 and women make up 70 percent of all Ebola cases in this outbreak.

According to data from the World Health Organisation, women and girls aged 11 and older have contracted Ebola at a higher rate than men and boys in the same age range.

Young children – five and under – are more likely to die from the Ebola virus.

According to a 2015 study looking at the West Africa outbreak – which occurred between 2013 and 2016 and claimed more than 11,000 lives – the Ebola virus had a shorter incubation time in younger children, and babies and toddlers had a higher mortality rate than any other age group.

Those under 18 account for about 30 percent of Ebola cases in the current outbreak, a higher percentage than the West Africa outbreak.

Why are women and girls particularly at risk?

Women are often the primary caregivers for their families, taking care of sick children and relatives. They also bear responsibility for funeral arrangements, meaning they are more likely to come into contact with the virus, said Benoît Munsch, country director for CARE, an international NGO involved in the response.

“The woman is not in charge of her protection/prevention," said Consolée Kahambu Kavingu, whose older sister died of Ebola after caring for a sick relative. “The man is the head of the family. He may, for example, refuse to allow his wife and children to be in the hospital when they are ill." 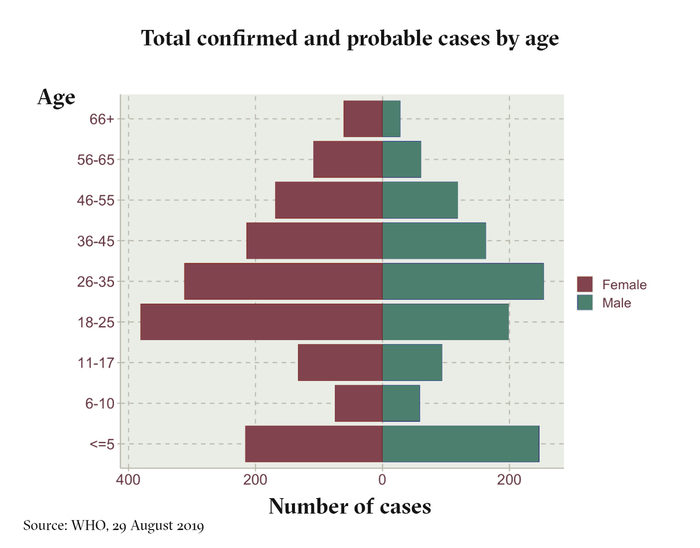 If a mother falls sick and there is no one else to take care of younger siblings, older children – especially girls – often end up shouldering the care-taking burden, according to Munsch. “And that limits her ability to go to school – to do anything,” he added.

Recent studies have also suggested that sexual transmission of Ebola could play a greater role than previously thought.

Ebola is primarily transmitted through direct contact with blood and other bodily fluids such as semen. Some studies from the West Africa outbreak found that the virus can survive in men’s semen for several months after the onset of symptoms and even after recovery, potentially extending the time that men could transmit the virus.

It is still unclear, however, how many cases in the latest Ebola outbreak may have been through sexual transmission, but infected mothers can also transmit the virus to infants through breastfeeding.

What other impacts can Ebola have on children?

If a mother contracts Ebola, it can often mean days or weeks in a treatment facility, separated from her children. She can also pass the disease on to her children and family members, sometimes even in the process of taking care of her children.

“In some cases... because the mother needs treatment for something else – perhaps malaria – she may go to a health centre and take her child with her, and they are contaminated [with Ebola] in the health centre,” said Heather Kerr, country director for Save the Children.

“That has happened on quite a few occasions. Normally, mothers would try and get other family members to look after their children, but it’s simply not possible a lot of the time.”

While less likely to contract Ebola than infants, older children miss school if the family breadwinner falls sick and is no longer able to pay school fees. This sets children back in their education and means they’re less likely to be in a protective environment, according to Kerr, who added that some young people who have lost parents to Ebola can be more vulnerable to sexual abuse or gender-based violence.

Are children being properly tracked and vaccinated?

Despite their high-risk status, children under five are frequently slipping through the cracks in the response, according to both UNICEF and the WHO.

When response workers engage with communities to create lists of contacts who may have encountered someone with the disease, many children who should be on those lists aren’t, according to UNICEF spokesperson Melissa Winkler. That means children at extra risk aren’t being monitored and are missing out on potentially life-saving vaccinations.

“We don’t yet know why young children are not being counted as contacts,” said WHO spokesperson Margaret Harris. “It seems to be family fear of misdiagnosis or of the disease itself. Perhaps people underreport believing they’re protecting children.”

Sometimes interviews conducted to establish chains of contacts are done when someone has just died, so the entire family may not always be present or may be too grief-stricken to talk.

“It does seem that the focus is generally more on adults and that children are often overlooked,” said Whitney Elmer, country director for Mercy Corps.

Several emails and messages seeking comment from the government-led Ebola response remained unanswered by the time of publication. 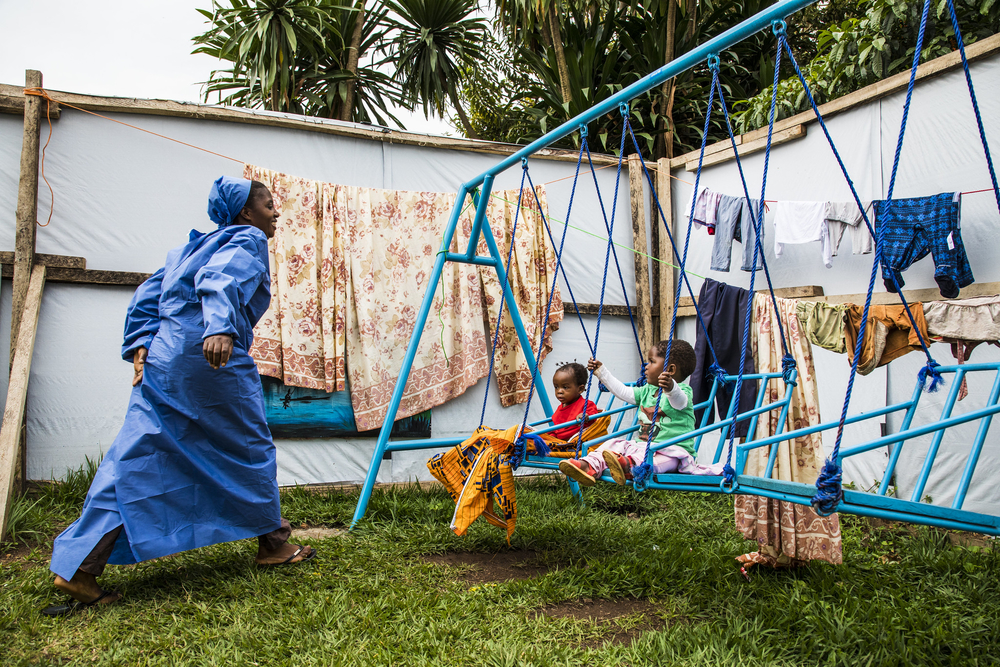 Vincent Tremeau/World Bank
A caregiver plays with children at an Ebola treatment centre in Beni, Democratic Republic of Congo.

What happens to Ebola orphans?

The government tries to place Ebola orphans with family members or foster families. The stigma surrounding the disease, however, often causes reluctance.

“It’s also a huge economic burden on extended families to foster children,” said Kerr. “If parents die, an uncle or aunt may not be taking in just one child, but three, four, five siblings.”

The placement process also involves providing food and material support to the children – and sometimes the foster family – to help them support the extra children.

UNICEF has trained more than 900 of the government’s psycho-social support workers, who are tasked with negotiating placement situations and providing psychological support.

There are 6,509 primary and secondary schools in the Ebola-affected areas of Ituri, North Kivu, and South Kivu provinces, according to UNICEF. Some 3,800 of them are in high-risk areas, and most opened this week for the new school term.

Hundreds of school-age Ebola survivors and children orphaned to Ebola are among those returning to schools that have now been equipped with thermometers, hygiene supplies, and handwashing stations.

School fees for children who have lost caregivers are being provided for one year. Provision of other material support is evaluated on a “case-by-case basis”, Winkler said. It is unclear how much funding or help will be made available on a longer-term basis.

According to Winkler of UNICEF, unlike measles or malaria, the stigma around Ebola can leave survivors and their families isolated long after the disease has passed.

A 2018 study on communities in Sierra Leone affected by the West Africa outbreak found that symptoms of post-traumatic stress disorder (PTSD) and anxiety-depression were common after one year of the outbreak.

“We are starting to think about what can we do for the children who have survived Ebola and how can they be integrated back into their communities,” said Kerr. “It’s really important that we start having those conversations now.”