For weeks, health workers have been urging Minara Begum, 23 and pregnant with her third child, to deliver her baby at the nearest health facility in Bangladesh’s cramped Rohingya refugee camps. But she’s too afraid.

“I hear if it’s a baby girl, they may give it to me, and if it’s a boy, they will certainly kill it,” Minara says. “They might force me to have an operation and take my money. I hear we might be exposed to unknown men in the hospital.”

Instead, Minara plans to have her baby the way most Rohingya women deliver in the camps: at home in a tiny bamboo and tarpaulin tent.

Nearly three of every four births here happen in “unsafe and unsanitary” bamboo shelters now home to nearly one million refugees, according to an assessment released today by Save the Children. These home births are often presided over by untrained traditional birth attendants – not by medical professionals who can treat life-threatening complications.

Aid groups say investments in maternal health must be rapidly boosted so that newborns and pregnant women can access care – in the lead-up to the pregnancy and in the crucial weeks after childbirth. This includes health facilities with birthing units open 24 hours a day, and better access for women living in distant corners of the sprawling camps.

But the maternal health services that do exist are underused. Médecins Sans Frontières says only a small proportion of its consultations involve hospital deliveries – a reversal of what it sees in most crises. 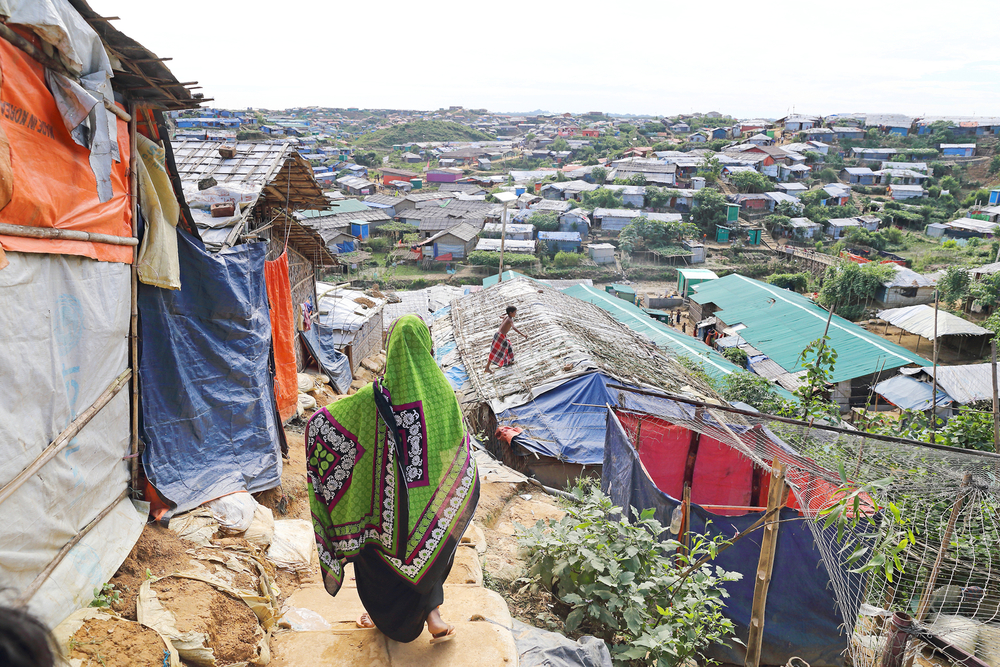 Maternal health experts say aid groups must also do more to counter patriarchal norms and dangerous misconceptions that have led to a collective mistrust. Many Rohingya were barred from accessing healthcare back home in Myanmar, where the government imposed apartheid-like restrictions on the Rohingya years before the military ousted some 700,000 people in August 2017.

Aid groups are enlisting traditional birth attendants as outreach workers to encourage women to have their babies in safer medical facilities. But these health workers say rumours and misinformation have flourished after the Rohingya exodus from Myanmar.

Until six months ago, health worker Sakhina Khatun was a traditional birth attendant, assisting in up to two deliveries a day. But those days are behind her. She was recruited as a community health worker for the Hope Field Hospital for Women, a clinic run by a Bangladeshi-American NGO, the Hope Foundation.

In her new role, she identifies pregnant women, visits them at home, and encourages them to come to health centres. If they agree, she accompanies the women for antenatal and postnatal visits, and for the delivery.

“It took us two hours and she was in labour, but in the end we managed and I think we saved a life.”

The New Humanitarian followed Sakhina as she visited women in their tent homes in one part of Kutupalong camp, the massive settlement where most of the refugees now live. In several households, women had given birth within the previous week. Some women were fine, but others were developing infections.

“They all prefer to give birth at home,” she says.

Minara is one of Sakhina’s patients. She says her husband is also opposed to her delivering in a hospital. She fears her neighbours will call her a “bad woman” if she leaves her home: “I’m not brave enough,” she says.

A few doors down, her neighbour gave birth at home a week earlier.

Aid groups say former traditional birth attendants like Sakhina are an important bridge between maternal healthcare and a community that has been reluctant to seek it out. The UN Population Fund, or UNFPA – the aid agency coordinating the sexual and reproductive health response – says humanitarian groups are trying to integrate traditional birth attendants as “safe motherhood promoters” because they have strong influence within the community. The UNFPA currently works with nearly 500 community health workers, many of them experienced birth attendants.

But there have been mixed results. 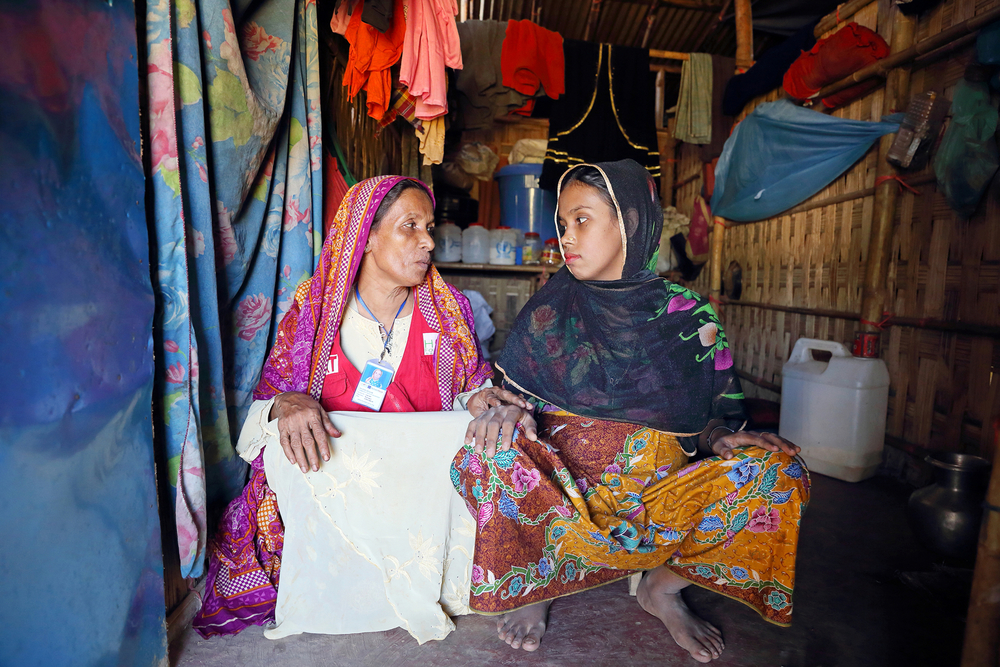 “Mothers come to us for antenatal checkups, but choose to give birth at home,” says Sharmin Begum, a midwife in a primary healthcare centre run by the Hope Foundation.

The crisis has forced her to adapt. Sharmin recalls one pregnant patient who had been coming to the hospital for care. When it came time to give birth, however, the woman’s husband and mother-in-law refused to allow the delivery outside the home.

Sharmin went to the woman’s tent, which was “small, dark, and cramped”. The woman’s family relented only after a majhi – a Rohingya camp block leader appointed by Bangladesh’s army – was brought in.

“It took us two hours and she was in labour, but in the end we managed and I think we saved a life,” she says.

Most Rohingya pregnancies in the camps are overseen by traditional birth attendants like Nasima Khatun. She keeps the tools of her trade in a white plastic container: a spool of red thread and a rusty blade.

Her method has been the same through 25 years as a dai, or birth attendant: she uses the blade to cut the umbilical cord and the thread to tie it. But before that, she prays.

“I pray seven times, I blow on the water, and the water turns holy,” she says, sitting cross-legged on the floor of her bamboo and tarpaulin tent. “I then give it to the mother and she becomes strong and gives birth.”

“Mothers who deliver at home may experience more complications at the time of the birth, such as bleeding, infections,” says Hassan Abdi, reproductive health coordinator for UNFPA in Cox’s Bazar. “If it goes uncontrolled, it will lead to maternal death.”

The UNFPA is preparing new research that for the first time will estimate maternal mortality in the camps. Preliminary data suggests that the majority of 82 pregnancy-related deaths analysed in the study were caused by treatable complications like obstetric hemorrhages, pregnancy-induced hypertension, and infections. In many cases, the woman’s family did not seek treatment.

The reluctance or inability to access health services, Abdi says, is already leading to preventable deaths.

In order to improve maternal care in the camps, health workers say they need to build trust with Rohingya families, including husbands and male community leaders now standing in the way of women seeking help outside the home.

Aid groups also need to make sure that women who do go can actually reach health centres. A recent assessment by UNFPA , for example, showed there weren’t enough ambulances to transport complicated cases for specialised care.

“There are currently eight field hospitals with secondary referral capacities, but most often [they’re] faced with challenges of not being fully functional 24/7, resulting in unnecessary delays that can lead to avoidable maternal mortality,” Abdi says.

For now, health workers like Sakhina Khatun, the former birth attendant, are concentrating on one patient at a time.

In her tent, Minara Begum, the 23-year-old expecting her third child, says she might muster the courage to go to the hospital – if the health worker will go with her.

Sakhina, pleased, smiles back at her patient. “We will go tomorrow,” she says.

The reporting was supported by a grant from the European Journalism Centre, with funding from the Bill & Melinda Gates Foundation

(TOP PHOTO: A midwife examines a Rohingya mother at Hope Field Hospital for Women, a clinic run by the Hope Foundation, a Bangladeshi-American NGO.)