Donor countries and aid organisations are protesting a UN decision to shift most decision-making for aid operations for Syria to Damascus, a move they say hands more power to the government of President Bashar al-Assad and will make it harder to deliver aid to millions of people who live in rebel-held parts of the country.

UN humanitarian chief Mark Lowcock’s intention to alter the system the UN has used for the past four years to ensure aid is delivered on the basis of need to both government and rebel-held territories – known as the “Whole of Syria” approach – was announced at a closed-door meeting in early April.

Currently, two people of equal seniority run the UN’s Syria response: one based in Damascus to deal with aid to areas held by the government (although the position has been vacant since last December as al-Assad has not approved the UN’s nominee), and the other in the Jordanian capital, Amman, to handle deliveries across international borders to parts of Syria controlled by rebels.

The latter position, now held by regional humanitarian coordinator Panos Moumtzis, is expected be closed by the end of the year at the latest, according to multiple sources and leaked documents. The UN’s most senior decision-maker for Syria will then sit in Damascus.

An estimated 4.5 million people – 38 percent of Syrians who need aid – live in parts of the country al-Assad’s forces do not control.

A dozen aid workers, officials, and analysts – all of whom requested anonymity either because they were not authorised to speak to the media, or because they were concerned about the sensitivity of the subject – said the removal of the Amman position would undermine the importance of cross-border aid deliveries from Iraq, Turkey, and Jordan to rebel-held areas, both in practice and in theory.

Al-Assad’s government has long objected to these deliveries, but cannot stop them as they are authorised by the UN Security Council. While this will not change if the Amman job is eliminated, one NGO source labelled the dual leadership arrangement the “capstone” of an approach that made sure aid reached wherever it was needed, whoever was in control of the territory.

Those working in the rebel-controlled north are particularly concerned by the plans. A senior aid worker who operates in territory not run by the government said the changes had made Syrian NGOs “feel we have been betrayed by the international community”. 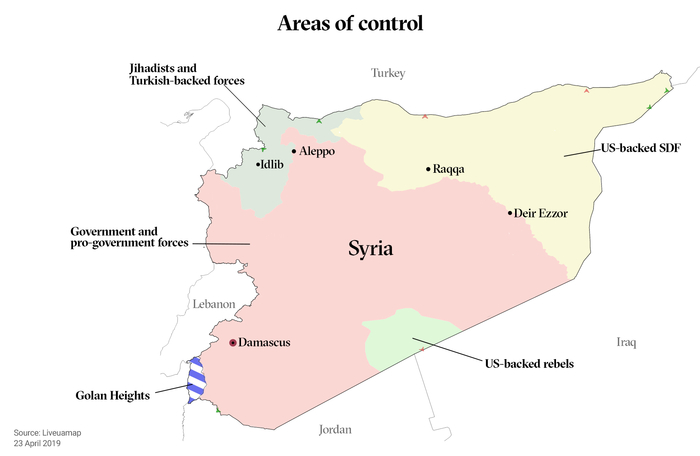 The UN’s arguments for eliminating Moumtzis’ position have not been made public, but observers say Lowcock, who heads up OCHA, the UN’s emergency aid coordination body, is responding to the changing facts on the ground: the government now controls the majority of Syria, and a single chain of management could be a simpler, cheaper, and more effective way to operate.

OCHA, which employs more than 40 people in Turkey and Jordan for the Whole of Syria system – at a cost of over $6 million in 2017 – faces financial pressures across the globe, and reducing the cost of its Syria operations may release resources for other crises, including places like Venezuela.

An OCHA spokesperson said the UN, while committed to “maintain strong and distinct leadership” for cross-border operations, was reviewing the arrangements and consulting a “wide range of stakeholders”. The review aims to ensure life-saving assistance is “principled, timely and effective”, the spokesperson said in an emailed statement, without clarifying if the decision to shift to Damascus was final. Lowcock was unavailable for comment.

The proposed change comes as al-Assad’s victory is increasingly seen as a fait accompli, but the UN still says the needs are so severe in territories the government does not control that they contain 38 percent of Syrians who require aid.

That includes an estimated 2.7 million people in and around northwestern Idlib province; 70,000 people at al-Hol camp in the northeast, many of whom who recently fled so-called Islamic State’s last territory in Syria; a further 1.4 million in the northeast, thrown into extra uncertainty by a US pullback of its forces; and 35,000 people stranded at Rukban on the border between Jordan and Syria.

In a 16 April letter addressed to Lowcock, obtained by The New Humanitarian but not made public, major contributors to the multi-billion-dollar UN-led aid operation in Syria – including the United States, the EU, Germany, and the UK – say the move “would undermine provision of principled humanitarian action and significantly harm efforts to ensure humanitarian assistance reaches those in greatest need”.

Syrian and international NGOs that work in Syria also expressed “serious concern” in their own 15 April letter – again seen by TNH but not made public – saying that ending the Whole of Syria approach could “have adverse consequences for millions of Syrians in need”. The signatories represented dozens of organisations and included an alliance of international NGOs and two groups of Syrian NGOs.

The ‘Whole of Syria’ approach

The Whole of Syria system was formally introduced in early 2015, four years into the Syrian war, over concerns that – with UN operations headquartered in Damascus – al-Assad’s government was regularly stopping aid deliveries to parts of Syria controlled by its enemies, and the needs of people in those parts in the country were not being met.

Over time, the UN built up its capacity to coordinate and deliver aid from Syria’s neighbours, winning legal legitimacy from the Security Council in mid-2014 for the cross-border effort.

A 2016 review, commissioned by OCHA but never published, found that the structure had played an essential role in allowing aid groups to get a more complete picture of the needs in Syria, and of what was being done to meet them. According to a late draft seen by TNH, the review also acknowledged tension in the “dual-leadership” arrangement and suggested that the regional position – the one being abolished – should have seniority in decision-making.

Three years later, an internal March 2019 OCHA “reflection” paper obtained by TNH found that the system had “become an obstacle to a constructive relationship with the Government of Syria”, criticising a sprawling system with multiple leaders, in need of simplification. A summary of the “reflection” paper was presented at the early April meeting.

An extract from the internal OCHA paper replete with acronyms, committees and diagrams. A "Byzantine" system, according to one analyst.

Opposition from inside the system

The 11 donors highlighted the issue of aid reaching people in rebel-held territory in their 16 April letter, writing that: “Syrian authorities have demonstrated that they will not permit unfettered flows of assistance into areas outside their control”, adding that the regional humanitarian coordinator role is “particularly important” in coordinating this access.

For its part, the NGO letter suggests an understanding of the growing role Damascus will play as al-Assad gains more territory, saying “the current and future Syria response will need additional investment, presence and leadership in Damascus”. But it adds that this should not come at the expense of the Whole of Syria approach “for as long as there are significant humanitarian needs which can only be met from other hubs”.

At the moment, those “hubs”, or offices, are Gaziantep in Turkey, and Amman. Aid also crosses into Syria from Iraq.

The UN’s Syria operations in Turkey are run by Mark Cutts, a deputy to Moumtzis. Given the importance of rank in the UN, Cutts would not be able to rival whoever the new Damascus chief is in terms of decision-making clout.

The senior aid worker who works in rebel territory said it had taken time for Syrian NGOs to build up trust, with UN agencies, as well as with both Moumtzis and Cutts.

“There is no trust” with Damascus, they said, stressing that anyone assigned to the capital would have to be vetted and approved by al-Assad’s government, meaning aid groups working in rebel-held areas would not feel comfortable sharing information with them.

Overall, the source said, the change would make it harder to deliver to rebel-held areas. Al-Assad “did not win yet, but [this] is helping him to finalise [victory],” the source said. “It is changing the system to support him. That is how we look at it.”

“The humanitarian emergency in Syria is far from over.”

Asked for comment on the planned closure of his position, Moumtzis did not directly confirm the move. The UN and humanitarian NGOs are “discussing internally… options available in order to safeguard a smooth continuation of operations in all areas [of Syria],” he said by email, noting that with millions of Syrians still dependent on aid, “the humanitarian emergency in Syria is far from over”.

Despite the criticism of Lowcock’s plans, some in the aid community said that the Syria aid operation does need to be simplified.

One pointed out that the UN has a single coordinator in Yemen despite a divisive conflict and two major blocs of control, while another analyst said keeping UN and NGO offices in Jordan, from where the UN delivers hardly any aid (unlike during the early years of the war), is wasteful. Half of the aid reaching northeastern Syria comes via Damascus already, according to Moumtzis himself, speaking to media in Geneva last week.

The donor letter appeared to recognise budgetary concerns, saying that “while consolidating coordination functions could yield some small budget savings”, it would harm the aid effort overall.

A senior NGO official familiar with the debate said Lowcock may be seeking “more coherence” in ending the Whole of Syria approach, but added that they did not understand the haste in the decision and objected to the lack of consultations with those whose work would be impacted – a criticism the NGOs also raised in their letter.

Another humanitarian analyst in the region who recently visited northeastern Syria said they did not think the change would have much of an impact, given that the balance of power in Syria has already clearly shifted towards al-Assad.

The analyst described the current system as “Byzantine”, and welcomed the opportunity to consolidate UN accountability in one figure.

Following the April 15 and 16 letters, Lowcock’s staff told a meeting of senior UN and NGO managers that the Whole of Syria approach was undergoing a “light review”.

The donor letter says they “understand the future of the RHC [regional humanitarian coordinator] position is not finalised”, and while Lowcock certainly has time to walk his decision back in the face of fierce opposition, the yearly UN-NGO plan for humanitarian response in 2019 – including all areas of the country – is currently bogged down in negotiations with Damascus.

A senior NGO source said the Syrian authorities are demanding changes to “minute details” and wording at a late stage. This has happened before: the UN reportedly allowed al-Assad’s government to edit the 2016 and 2017 plans, including the removal of some references to “sieged” or “besieged” areas.

Even though the UN started its 2019 fundraising at a recent conference in Brussels and is delivering aid without the final plan, the absence of an agreed document on where aid will go undermines operations and donor confidence, and, according to a senior NGO official, gives a bargaining chip to the Syrian government over its cooperation.

While donors and NGOs wait for a response to their objections, the UN has no top official in Damascus, it still has no finalised plan for how to meet the needs of Syrians this year, and it has generated a backlash from its closest partners. As one senior aid official put it: “Mark [Lowcock] has put himself in a difficult situation.”