Venezuela is to receive more than $9 million in assistance from the UN's Central Emergency Response Fund, according to the official list of 2018 allocations.

The move signals the first known acceptance of UN emergency activity from President Nicolás Maduro's government, which has up until now refused international assistance and argued that there is no humanitarian crisis in the South American nation.

Venezuela, which has the largest known oil reserves in the world, has seen its economy implode over the last three years, during which time at least 2.3 million people have fled the country and inflation has soared to more than 800,000 percent.

The grant is allocated under the fund’s rapid response mechanism and is split between five UN agencies to assist programmes ranging from child malnutrition to gender-based violence.

The largest tranche, $3,650,870, goes to the World Health Organization for “ensuring emergency care delivery capacity in priority health institutions to address essential health needs of the most vulnerable population in Venezuela.” 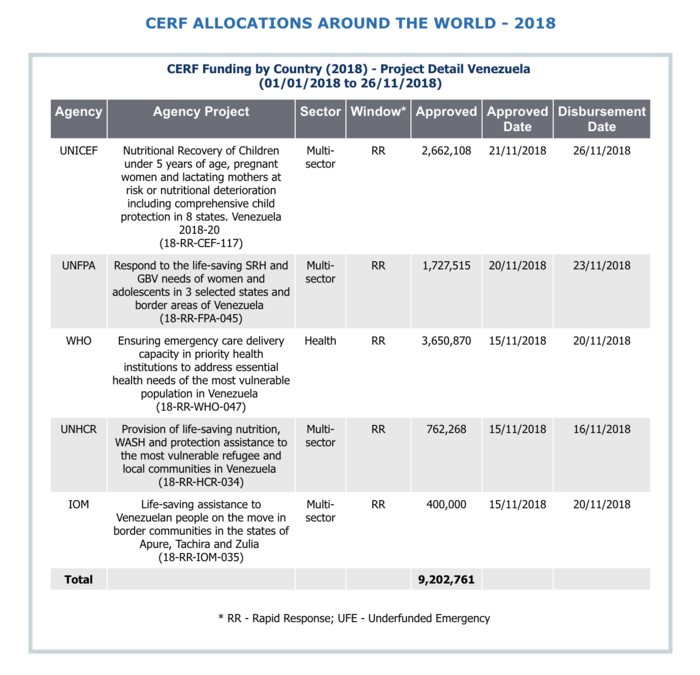 There was no immediate confirmation from the government that it had accepted the projects, but according to the table above, taken from the CERF website, four of the five lines are already being disbursed and the fifth was approved last week.

Up until now the UN has almost entirely confined its assistance to helping Venezuelans once they have crossed the border into a neighbouring country.

But despite it apparently being the first time the Venezuelan government had agreed to emergency assistance, observers advised caution before accepting it as a milestone moment.

Venezuelan Saul Guerrero, technical director with NGO Action Against Hunger, said the CERF grants “won’t make much of a difference unless the persistent and ill-advised policies of the national government to block humanitarian aid have been lifted.”

For Francisco Toro, executive editor of the Caracas Chronicles news site, anything that alleviates the suffering of the Venezuelan people is a good thing, but he warned that aid mustn’t become “a pretext not to restructure economic policy”.

“It's an atypical crisis because the humanitarian needs are immense, but the drivers aren't conflict, climate, or natural: the crisis is a function of terrible policy,” he said. “You could achieve multiples of the impact of this donation simply by agreeing simple economic reforms that would be seen as consensus measures anywhere else in the [western] hemisphere.”

The news comes two weeks after the UN’s refugee agency, UNHCR, and the International Organisation for Migration, announced that the number of Venezuelans that have now left the country is in excess of three million, including more than 2.3 million since 2015. The vast majority have fled overland to neighbouring Brazil and Colombia, and near-neighbours Ecuador and Peru.

Millions more have stayed behind in a country wracked by hyperinflation and hunger. Shortages of food, electricity, and basic supplies have reached crisis levels, as reported widely, including by IRIN.

US President Donald Trump imposed fresh sanctions on Maduro and his inner circle in September and urged the restoration of democracy in the leading OPEC nation.

Maduro’s government has repeatedly refused aid and insisted that Venezuela, which used to be the richest country in the region, is the victim of an economic plot by Western nations.

"I insist here there is no humanitarian crisis; there is a war on the country,” Diosdado Cabello, president of the National Constituent Assembly, said last month, before adding: “Those who speak of humanitarian crisis are the ones who have created war against our country.”