This article is part of our in-depth coverage. Read more like this...
ABKAMARI DISTRICT/Afghanistan

The dusty, barren hills of western Afghanistan stretch far into the horizon. Here in Badghis Province, a severe drought has left barely any vegetation alive. But some villages in Abkamari District are an exception.

Parts of the district are full of life – a green oasis with verdant vegetable gardens stretching between parched hillsides.

Although Abkamari has not been spared from a drought that has destroyed harvests, killed livestock, and forced 250,000 people from their homes across the country, here one simple solution has made a difference: New water systems and rehabilitated pumps have allowed farmers to grow food – and kept hundreds of local families from abandoning their homes in search of help.

While emergency aid is necessary for the most desperate, some NGOs worry it’s also pulling people away from their homes, creating new displacement and adding to the costs of what’s now a half-billion dollar humanitarian response in war-torn Afghanistan. Instead, they say, the broader aid sector could have mounted a drought response far earlier, and done more to prevent people from leaving in the first place.

The United Nations estimates that $116 million is needed to respond to the drought. This includes both emergency aid – such as food assistance totalling $14 million a month – and longer-term help. According to NGO World Vision, rehabilitating a water pump costs about $80, while a new purification system is priced at $58,000.

Haji Bismillah, a 45-year-old farmer, is one of the people who decided to stay along with his two wives and 15 children. In his sun-bleached traditional dress and a white cap, he proudly pulls weeds between the tomato plants in his vegetable garden – a patch of greenery surrounded by sparse hills.

“I’ve always been a farmer, but all of my rain-fed crops have died,” he said. “This plot has changed our lives.”

Aid groups and the Afghan government are struggling to keep pace with soaring humanitarian needs caused by the drought. An estimated 1.4 million people need help with water, food, and shelter, but funding shortfalls and conflict have prevented aid from reaching everyone who needs it. Sprawling tent camps of displaced rural families have emerged on the outskirts of urban centres like Qala-i-Naw, the provincial capital an hour’s drive from Bismillah’s home, and in Herat city to the west.

Bismillah decided to stay for a simple reason: Access to water in his remote village.

The cost of clean water

A five-minute walk uphill from Bismillah’s plot, World Vision set up a solar-powered water purification system for the 700 families living around the area. The system pumps salty groundwater from a deep well, which is then filtered into drinking water. Before the system was finished, the NGO trucked water to the village to make up for the shortages.

Dwain Hindriksen, operations director for World Vision in Afghanistan, said the organisation set up water systems to help people stay home rather than join the ranks of the displaced.

“We wanted to meet the needs in the communities and support people to get back on their feet,” he said. “If we can help people maintain their livelihoods, it will sustain them long after the emergency has passed.”

In Abkamari’s Zingar village, where a water purification system has been in place for almost a year, none of the 300 families have left. In Bismillah’s village, Qapchiq, 100 families left before the system was installed, but 188 other households decided to stay once water was available, according to Saskidad, a community leader and member of the village-level water management committee. 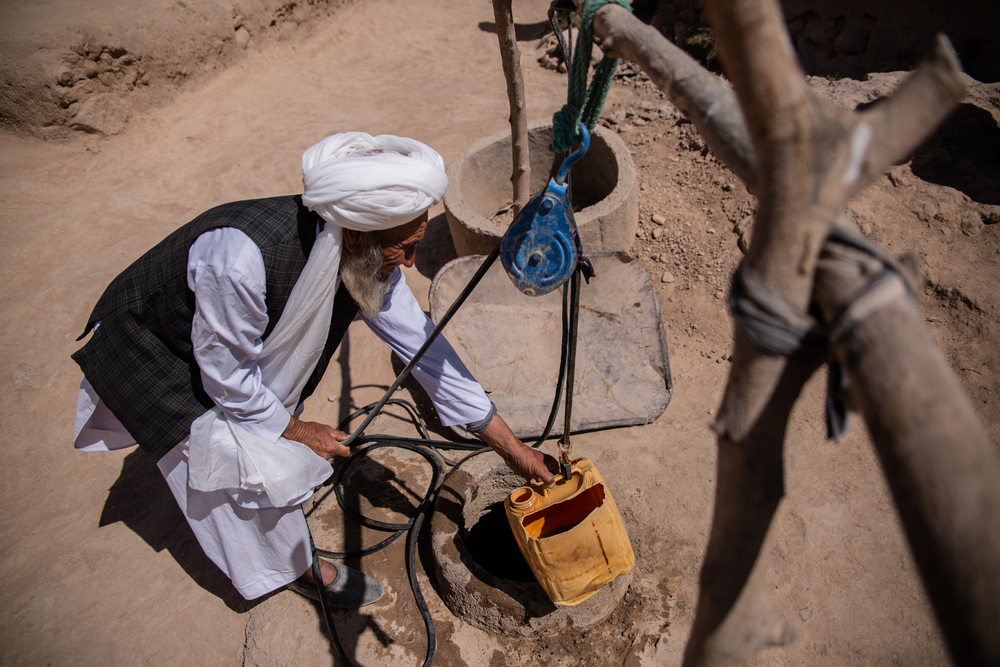 Stefanie Glinski/IRIN
Community leader Saskidad, 65, draws water from a well in Qapchiq village in Abkamari District in western Afghanistan. "I've never seen such a year in all of my life," he says of a severe drought that forced him to sell his livestock.

The drought had already destroyed his crops, he said, but access to water has helped him survive.

“This water system is saving us time,” he said. “We used to walk up to six hours to find enough water. We’re also receiving food to make up for our lost harvests.”

Badghis is not an easy environment to work or live in. Parts of the province are contested, where Taliban insurgents set up camp in the bleak mountains, and army checkpoints line the main gravel road leading in.

Fighting between Taliban and government forces erupts sporadically and humanitarian access to the area is often limited. Civilians often end up in the crossfire.

“We’ve been working in the area for a long time. It’s the local community that ensures security and safe passage for our staff,” said World Vision’s Hindriksen.

And while new water systems have helped some families stay, others leave for many complex reasons.

Among a burgeoning patchwork of tents outside Herat city, families who fled their rural homes told IRIN that the conflict was one major factor in their decisions to leave.

For others, like Awalin, 42, the reasons are more personal. He said he left his home two months ago to find healthcare for his injured son.

“My son Sudais poured hot water over himself and was left with dangerous burns,” Awalin said. “I decided we needed to move.”

Other displaced Afghans, however, dream of returning home. Hassan Medin, 32, came to the outskirts of Qala-i-Naw this year. He says desperation pulled him toward the city – he didn’t have any water to grow his crops.

“We didn’t receive any help in our village, so we came to Qala-i-Naw. We heard that we’d be helped here,” he said, sitting inside his tent – a simple linen cloth spread across a wooden pole.

“I would go back,” he said, “if we knew that aid agencies would come and help us in our homes.”

NGOs operating in other parched areas of Afghanistan have found similar results. In Nimroz Province, along Afghanistan’s southwestern border with Iran, 30 percent of the population of the district of Chakhansoor had fled to packed Zaranj, the provincial capital, according to Relief International. Many migrants planned to head to Iran, even though the country is facing its own economic crisis and Afghans there are returning home  – or being deported – in droves.

But Relief International is building new wells in Nimroz, giving some communities access to water. People in affected villages told NGO staffers they would stay if they had water – even though the drought had stripped farming communities of their livelihoods and worsened health conditions.

“The sole existence of a safe source of water was a sufficient incentive for the population to stay in their villages,” a Relief International report documenting the June mission stated.

“Despite hardship, given the option, people would rather not leave their home,” the report concluded. 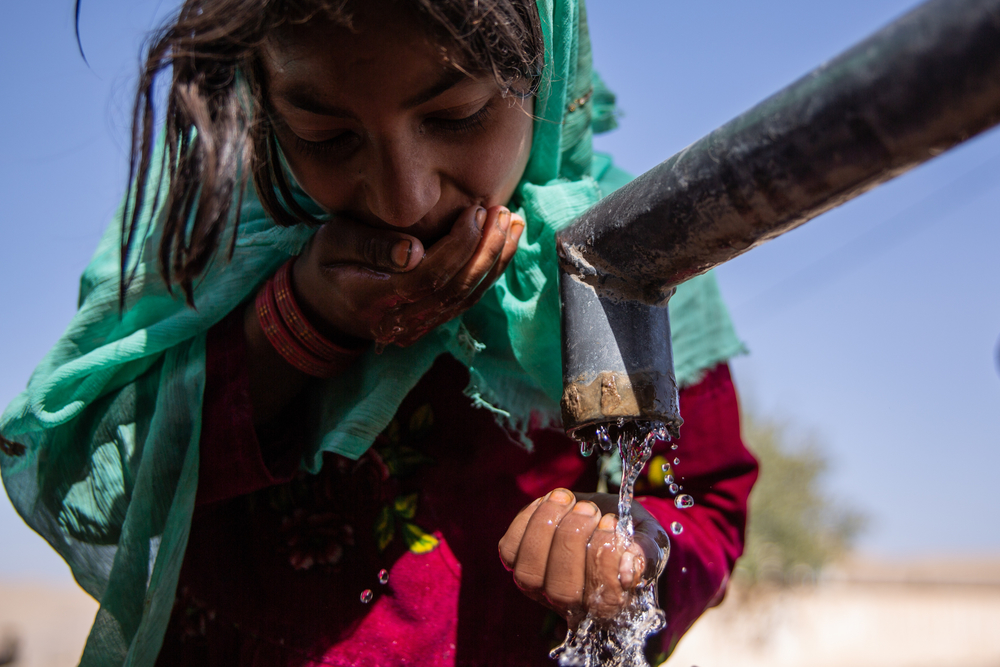 Stefanie Glinski/IRIN
Rehabilitated pumps and new water systems have helped people stay in their rural communities, rather than join the ranks of some 250,000 displaced by drought in Afghanistan this year.

Drought is a frequent concern in Badghis, as well as elsewhere in the country, and some aid groups say the government and the humanitarian sector could have lessened today’s emergency by responding far sooner. Last August, the Integrated Food Security Phase Classification, a multi-agency body that monitors food insecurity around the world, marked Badghis as an “emergency” – the fourth level on its five-point warning scale, just below “famine”.

This year, a July statement by 10 major NGOs working in Afghanistan called on the broader aid sector to view humanitarian assistance to displaced people as a “last resort”, and to invest in measures that would build livelihoods in the remote communities many Afghans are now leaving.

The statement urged “greater leadership” from the UN-dominated cluster system – the organisational structure used to coordinate the many humanitarian and development groups working in Afghanistan.

In a separate statement given to IRIN, the Agency Coordinating Body for Afghan Relief and Development, which represents 146 Afghan and international NGOs, said that OCHA, the UN’s humanitarian coordination arm, had “failed” in organising an effective response to the drought.

Barren fields, rising debt, and desperate measures: What daily life looks like in the drought-stricken provinces of Herat and Badghis

“We are now facing a drought situation which could have been mitigated with better coordination with government and other stakeholders,” the statement said, citing “weak relations among the humanitarian [and] development donors as well as [the] Afghan government”.

David Throp, the deputy head for OCHA in Afghanistan, said: “It’s hard to put into numbers, but the humanitarian community agrees that the response could have been cheaper if large-scale migration could have been prevented.”

Osman, an engineer at Afghanistan’s Ministry of Rural Rehabilitation and Development, said that the government did not officially declare a drought until April, delaying an earlier opportunity to fund a response. The UN says that more than 1.4 million people nationwide will need some form of emergency assistance due to the drought.

Osman, who uses one name, noted: “If it doesn’t rain this coming season, people will be facing a major catastrophe far beyond their ability to cope.”