After a tumultuous two weeks of political brinkmanship, Emmerson Mnangagwa was sworn in today as Zimbabwe’s new president, replacing the ageing Robert Mugabe who has led the country since independence.

In his inauguration at a packed national stadium, Mnangagwa delivered a positive speech promising to "rebuild our great country", to crack down on corruption, strengthen the “pillars of democracy”, attract foreign investment, and to hold elections as scheduled in 2018.

“He gave reassurances that he would re-engage international partners," said political analyst Ibbo Mandaza. "That is all because the international community is insisting on that because it's backing him.”

But how much change is really on the cards and what are the major challenges ahead?

Mnangagwa, 75, will lead a deeply divided party, seemingly bankrupt of fresh ideas, but with the weight of the country’s hopes for better times on his shoulders.

Mnangagwa served Mugabe for four decades as his enforcer and heir apparent, but after a spectacular falling out and dismissal as vice-president, he left for South Africa until a palace coup cleared the way this week for his return.

He arrived in Harare on Tuesday to rock star status as jubilant crowds cheered Mugabe’s resignation – but it was novel celebrity standing for a man more usually feared as a former spy chief and ruling party hardliner.

Mnangagwa himself seemed swept up in the moment. He told supporters at ZANU-PF party headquarters: “I appeal to all genuine, patriotic Zimbabweans to come together; we work together. No one is more important than the other. We are all Zimbabweans.”

Despite trying to cultivate a new, kinder image, the lawyer and former guerrilla leader repeated the same old revolutionary slogans at party headquarters, including “Pasi nemandu!” or “Death to the enemy!”

“Mnangagwa has a lot to prove,” said Kuda Hove, a Harare-based lawyer. “People are already sceptical, because it’s still ZANU-PF in form and deed.”

Mugabe’s exit “certainly represents the end of a painful era, but then it is also possible that Mnangagwa’s entry could usher in a new error”, he added.

ZANU-PF looks set to govern alone. Mnangagwa has now spurned calls for the repeat of a coalition with the Movement for Democratic Change that led to a period of economic stability after deeply flawed elections in 2008.

The country’s trade union movement and the Crisis in Zimbabwe Coalition, a 115-member civil society grouping, had both urged the creation of a broad-based transitional administration until fresh elections.

“It is time to open a new page,” said trade union secretary-general Japhet Moyo, and condemned what he fears will be the retention of “career ministers” by Mnangagwa, some of whom were well known “thieves and thugs”.

Will next year’s elections be free and fair?

“The military has helped steal elections before and there is no reason to suspect that it will not help [to do so] in future elections, whenever they are held,” noted Mandaza.

Opposition MDC spokesman Obert Gutu said political reforms are urgently needed to remove the “pillars of repression and oppression” put in place by Mugabe, but added that he was “cautiously optimistic” that this could be achieved.

University of Zimbabwe political science researcher Eldred Masunungure told IRIN that any changes, especially to the working of the Zimbabwe Electoral Commission, would need time to be “internalised and institutionalised”.

He said he feared Mnangagwa might “put big and heavy spanners in the reform works”.

Elections next year could not come at a worse time for the MDC. Veteran leader Morgan Tsvangirai is gravely ill, and the succession issue within his party is far from settled. 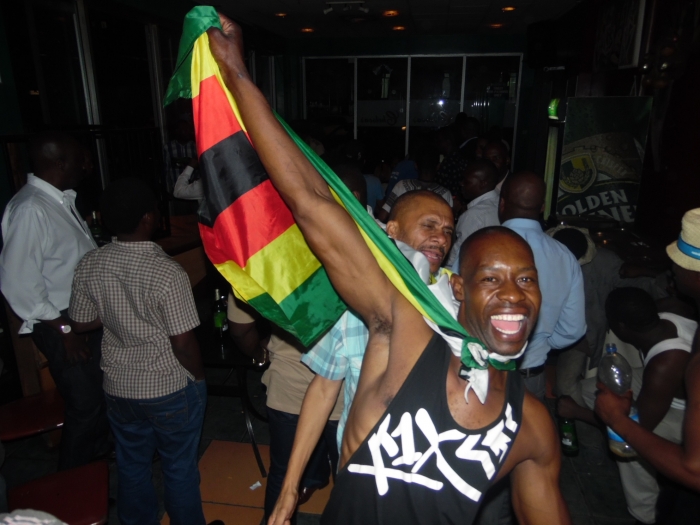 The biggest challenge for Mnangagwa is the state of the economy. Zimbabwe has been in crisis for close to two decades. Unemployment is sky-high (90 percent is the often-cited figure, although the data is disputed), and there are biting cash shortages and crumbling social services.

Between 2000 and 2008 Zimbabwe’s GDP nearly halved, the sharpest contraction of its kind in a peacetime economy, according to the International Monetary Fund. As a consequence, one in five Zimbabweans lives in “extreme poverty”.

The problem is that the structural reforms needed to attract foreign support will be painful.

The World Bank has called for a sharp reining in of public spending, including cuts to public sector salaries and moves to tackle Zimbabwe’s debt. The country owes $9 billion to foreign lenders and has been in default for nearly 20 years.

“It looks like workers’ woes might persist,” said Tafadzwa Choto, who heads the Zimbabwe Labour Centre, a pro-workers NGO. “There is need to reconfigure parastatals (state-linked companies) and remove cronyism and nepotism, but this will not be easy for [Mnangagwa] because he has too many people to accommodate in the new dispensation.”

Zimbabweans are expecting free – and improved – social services. Years of neglect have starved a once-proud health service, and left power and sanitation systems unable to cope with demand.

Rudo Gaidzanwa, a sociology professor, has a list of what she considers “essentials” for the government to spend its money on, and it’s long – from better transport to refuse collection.

“The new government must also be able to provide free medical care and schooling up to secondary school, in addition to [better] housing and other infrastructure,” she told IRIN.

Such high public spending would be diametrically opposed to the cost-cutting regimen the IMF and the World Bank has in mind.

The people of Matabeleland are a constituency Mnangagwa will struggle to win over. As minister of state security, he was responsible along with Mugabe and current Defence Minister Sydney Sekeramayi, for the killing of an estimated 20,000 Ndebele people between 1983 and 1987.

The campaign, known as Operation Gukurahundi (the rains that wash the chaff), was carried out by the North Korean-trained Fifth Brigade made up of mainly Shona-speaking soldiers.

Whole villages were purged with incredible brutality for the merest suspicion of supporting a small dissident armed group backed by apartheid South Africa.

It still remains an emotive issue in Zimbabwe between the Shona and the minority Ndebele, who make up roughly 20 percent of the population.

“It is very important for the administration to acknowledge and address the issue of the Gukurahundi massacres as we have never felt a part of the nation since the genocide,” explained civil society campaigner Dumisani Nkomo.

If Mnangagwa is to make headway with this long list of challenges, he is going to the need political support. But ZANU-PF is badly divided. The succession issue pitted Grace Mugabe and her so-called Generation 40 supporters against Mnangagwa’s Team Lacoste. Key G40 members were on the military’s arrest list when they rolled their armoured vehicles onto the streets.

The split within the ZANU-PF is also along regional lines. It was Mnangagwa’s Masvingo and Midlands Karanga powerbase that challenged the continued rule of Mugabe’s Zezuru Mashonaland-based clan. The Karanga are the largest Shona clan.

There are also concerns that the military’s decision to step in to support Mnangagwa – despite their insistence (with one eye on the region and the other on Western donors) that it was not a coup – has reinforced its already influential position.

The hard truth emerging for many Zimbabweans is that they’re already seeing strong similarities between the Mnangagwa era ahead and the Mugabe era that just ended, or as Mandaza put it: “The securocrats will remain in charge of state systems and processes, and the politicians will serve at their pleasure, as has been the case for a long time.”