My brother is a Zimbabwean farmer who has done pretty well for himself, but is now a worried man.

Last season he lost a significant amount of his maize crop to a single, voracious pest, and he fears for the worst when the new growing season begins in November.

Fall armyworm, or FAW, is new to Africa but has made an immediate impact. The caterpillar, originally from Latin America, was first detected in Nigeria in January 2016. By January 2017 it had reached South Africa – spreading officially to 24 countries within a year on a lightening journey down the continent.

It’s a ravenous feeder, with an appetite for more than 80 plant species – including maize, wheat, rice, sorghum, millet, and cotton. If left untreated, it can cause crop losses of up to 50 percent, munching its way through a hectare within 72 hours.

My brother, Sipho Mpofu, like virtually all farmers in southwestern Zimbabwe, grows maize, and in the last few years has added drought-tolerant sorghum and millet in response to the country’s drying climate.

He received his land from the government under its land reform programme that subdivided and redistributed fertile commercial farms to landless subsistence producers. He has seen his yields steadily improve and has been able to expand his farm, investing in new buildings and equipment.

Over the years, like other farmers in Mashonaland West Province, Mpofu would get occasional outbreaks of African armyworm, which marched over from East Africa several decades ago.

It’s a cousin to the FAW, almost as rapacious, with a particular fondness for maize. But having been around for many years, farmers now know how to deal with it.

Last year Mpofu encountered FAW for the first time. He assumed it was the usual armyworm (the difference is in the markings) and tackled them with the recommended tried-and-tested pesticides. To his dismay, they didn’t work.

Fortunately, the government was quick to recognise the new threat and recommended alternative pesticides. “That saved many farmers from certain ruin,” said Mpofu.

But he still lost about 20 percent of his maize crop. “There was a significant percentage [of armyworm] which was not affected by the pesticides,” he said, possibly because heavy rains prevented follow-up applications, or the caterpillars had burrowed deep into the plant. 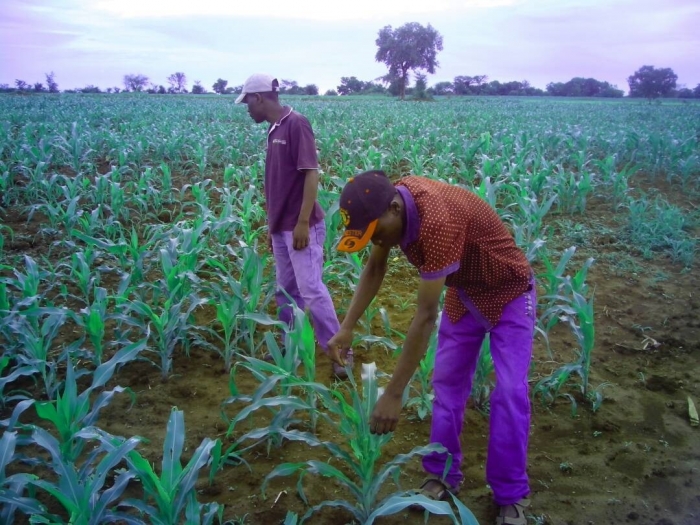 According to a the Centre for Agriculture and Biosciences International, Africa stands to lose $3 billion worth of maize this coming year as a result of FAW.

This will be a dramatic setback for small-scale family farmers who grow the bulk of Africa’s maize. With limited access to inputs and services, they also receive low prices for the maize they do sell – and need all the support they can get to combat FAW.

David Phiri, the UN Food and Agriculture Organization's coordinator for southern Africa, expressed his deep concern over “the emergence, intensity, and spread of the pest”.

As a moth, they are good flyers – averaging about 100 kilometres a night. They also multiply at a prodigious rate, with a female laying around 2,000 eggs in her 10-day caterpillar lifespan.

Climate change may also be an ally. Drought, followed by lots of rain – as southern Africa experienced last year after an especially strong string of El Niño seasons – seems to give them a boost.

“FAW has come to stay and it must be managed,” said Phiri. But farmers and agricultural extension officers in Africa are still learning how to identify the pest and understand its biology and ecology in order to manage it.

Mpofu has done his own research and is not optimistic. “I am worried by several issues,” he said. “The first one is that it is difficult to eliminate FAW, even using the recommended pesticides.”

The best chance to destroy the caterpillars with regular contact insecticide is when they are young, between day three and day six of their four-week lifecycle. But even then, hiding on the underside of maize leaves, they can be difficult to reach.

Older and larger caterpillars are harder still to kill. They bore into the stem or tassels at the top of the maize, which protects them from the chemical spray – and also kills the plant.

Brazil spends as much as $600 million annually to try and contain FAW. “Africa cannot afford that,” said Mpofu, which is another reason for his pessimism.

Nigeria has costed its FAW response at $8 million, much more than most countries. Zambia, with 130,000 hectares of land affected last year is spending $3 million, and Uganda $1.2 million. 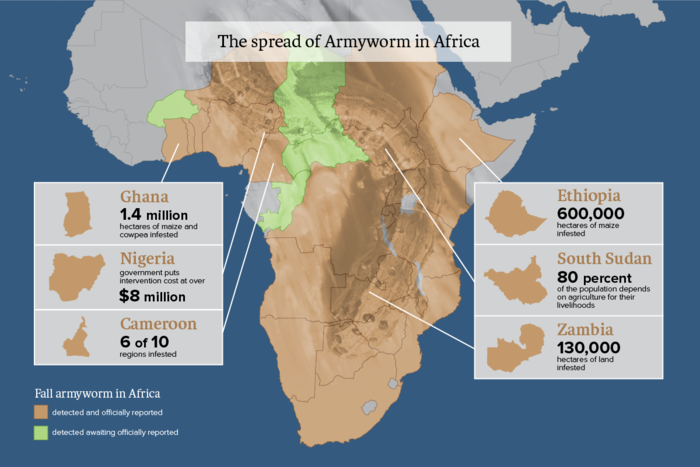 It’s not yet known which insecticides are the most effective against the strain of FAW now present in Africa – testing and development doesn’t happen overnight. The disconcerting experience from Latin America is that FAW develops resistance.

In Brazil, genetically modified maize that release Bt toxins is used to combat FAW. While this is an option in South Africa, where GM crops are accepted, it poses a problem for much of the rest of Africa, which opposes their introduction.

Moreover, FAW may be evolving the genetic ability to disarm that particular chemical weapon.

So, the advice from the FAO, in a series of strategy meetings held across the continent earlier this year, was that the use of chemical insecticides in Africa must be kept to a minimum to prevent a build-up of resistance, and to avoid poisoning the environment.

What then to do?

An FAO consultative meeting in Nairobi in April found no silver bullet. Instead, with FAW so new to Africa, it focused on strengthening systems, cooperation, and gathering data on the pest.

The new framework consists of: sustainable management, including surveillance and early warning; impact assessments; communication and awareness; and much-needed coordination.

The onus is on farmers to scout for early signs of the pest. They are also advised to plough deeply to bring young pupae to the surface, sow early to avoid the period of heavy infestation later in the season, and to burn all crop residue to reduce food and shelter for the caterpillar.

Biopesticides based on FAW’s natural enemies such as viruses, fungi, and bacteria would be a safer alternative to traditional chemical approaches. Botanical insecticides such as neem can also be effective.

But although FAO has pledged to help fast-track their introduction and local production, biopesticide research, registration, and commercialisation are both costly and time-consuming, according to armyworm expert Kenneth Wilson.

FAW has been sighted in Zimbabwe’s irrigated winter maize crop – which runs from June to August – despite the fact the caterpillar hates the cold. That means a difficult season almost certainly lies ahead for Mpofu and his fellow farmers.