This article is part of our in-depth coverage. Read more like this...
ISLAMABAD
Pakistan has backed off threats to deport more than two million Afghans starting next month, but the refugees are still under intense pressure to leave and the UN is accused of complicity in alleged plans to coerce them back across the border into a war zone.
Last week, Pakistan announced it would allow Afghans to stay in the country until the end of the year. Insiders say the decision by the administration of Prime Minister Nawaz Sharif came after lobbying from the UN refugee agency, UNHCR, as well as two allied political parties and the Afghan government. Sharif’s cabinet was also warned that such a move could push Afghanistan closer to Pakistan’s archrival, India.
But the decision will not alleviate the fear and uncertainty that Afghans live with in Pakistan. In fact, the situation is now similar to last year when about 600,000 Afghans crossed the border under intense pressure from the government, including an initial end-of-year deportation deadline (which was later delayed until the end of March 2017).
“Giving refugees short-term status and threatening deportation is a very effective way to get people to leave,” said Gerry Simpson, author of a report released today by Human Rights Watch.
The report accuses Pakistan of violating international law by committing refoulement: forcibly returning refugees to a country where they face persecution, torture or a risk to their lives. The report says UNHCR is complicit because it has failed to condemn government measures intended to coerce Afghans to leave and has assisted the government by providing cash grants to returnees.
“It’s clearly high time for UNHCR to speak in plain, simple English and call it what it is, which is forced return,” Simpson told IRIN.
SEE: Will the UN become complicit in Pakistan’s illegal return of Afghan refugees?

The refugee agency rejected HRW’s accusations.
“The return of Afghan refugees in 2016 from Pakistan was categorically not refoulement,” said Duniya Aslam Khan, a spokeswoman for UNHCR in Pakistan.
She told IRIN that the agency does not promote returning to Afghanistan, but offered the cash grant to those who decided on their own accord to leave Pakistan.
“We acknowledge that conditions for return are less than ideal,” said Khan. “UNHCR facilitates voluntary repatriation upon the request and fully informed decision of refugees.”
Simpson argued that conditions were not only “less than ideal”, but became so difficult for Afghans in Pakistan last year that repatriation became less of a decision than a necessity.
Halfway through 2016, the government launched a public information campaign warning Afghans that they needed to leave the country or face deportation. After that, refugees began reporting increasing animosity from members of Pakistan’s host communities and they often suddenly found their rents were increased, their children were not allowed to attend school, and employment dried up. The government has denied ordering security forces to harass refugees, but HRW collected evidence that such harassment dramatically increased after the government announced the plan.
SEE: Families torn apart as Pakistan forces Afghan refugees over the border
Harassment by security forces appeared to have dropped off late last year when the government extended the deportation deadline to March. It’s not yet clear whether refugees will be facing the same pressures in 2017, but Simpson warned of that possibility.
Those who decide to return to Afghanistan will be going home to a war that shows no signs of abating and has only become more dangerous for civilians. The UN Mission in Afghanistan recorded 11,418 civilians killed or injured last year, the highest number since UNAMA began documenting civilian casualties in 2009.
The Afghan government is struggling with a record number of displaced people, including those who fled their homes due to conflict last year, as well as record numbers of Afghans who have returned mainly from Pakistan and Iran. The government and aid agencies are asking for $550 million from the international community to support the most “vulnerable and marginalised” people in the country in 2017. 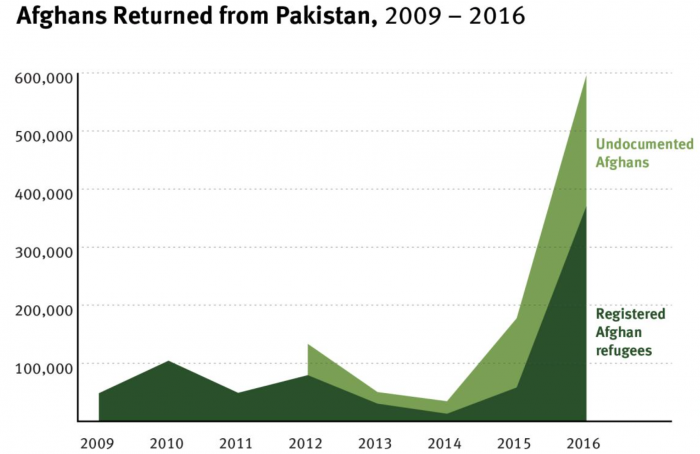 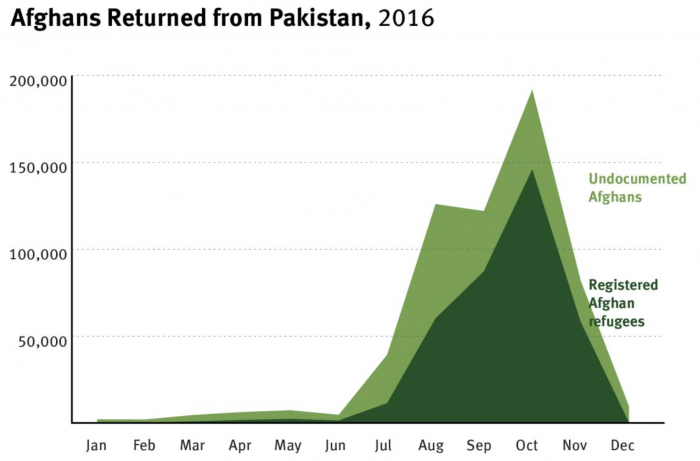 Afghanistan’s government formally requested Pakistan to extend the stay of the refugees until the security situation improves, according to a senior Pakistani official who declined to be identified as he was not authorised to speak to media on the subject.
The official said that the cabinet also received briefings, which warned that forced repatriation would put further pressure on the strained relationship between the two countries and that India might use that tension to its advantage.
“India can exploit sentiments of the deported refugees in its favour,” he said. “Therefore, we need to be extra careful in pushing the refugees across the border.”
Imran Zeb, Pakistan’s chief commissioner for Afghan refugees, told IRIN that the government also based its decision on appeals by UNHCR and two political parties, Pashtoonkhwa Milli Awami and Jamiat Ulma-e-Islam (Fazal).
Both parties receive most of their support from regions along Pakistan’s frontier with Afghanistan, especially among ethnic Pashtuns who live on both sides of the border.
“We don’t want to throw them into mouths of wolves in Afghanistan,” said Muhammad Jamaluddin, a Jamiat member of the National Assembly. “The refugees will go back voluntarily when the situation improves in their hometowns.”
Simpson, of HRW, said another likely factor was that Pakistan simply does not have the capability to quickly deport the approximately 2.4 million Afghans in the country. However, if Pakistan ramps up pressure on them as it did last year, and if about the same number leave as a result, it could force out most remaining refugees within three years.
SEE: Afghanistan’s deepening migration crisis
as/jf/ag
(TOP PHOTO: A truck carrying Afghan refugees returning from Pakistan travels through Afghanistan's Nangarhar province in August 2016. CREDIT: Jim Huylebroek/NRC)
Share this article
Join the discussion