This article is part of our in-depth coverage. Read more like this...
About 1,000 Afghans have fled their homes due to fighting each day since the beginning of the year, and aid workers can’t reach many of them, the UN says.
Internal displacement due to conflict rose 40 percent from 2014 to 2015, and this year could see another increase. About 118,000 people fled their homes in the first four months of 2016, the UN’s emergency aid coordination body, OCHA, said in a report yesterday.
“It’s been a rather alarming rise in the number of families displaced,” Stacey Winston, an OCHA spokeswoman in the Afghan capital, Kabul, told IRIN.
The northeastern province of Kunduz has been especially hard hit this year. So far, 22,400 people have been forced from their homes by fighting between the Taliban and government forces backed by international military.
Many of those displaced have been repeatedly forced from their homes.
The Taliban briefly took control of the provincial capital, Kunduz City, last October. In March, the insurgents surrounded the city, setting off improvised explosive devices that caused “widespread destruction” and sent 7,000 people fleeing into the homes of families and neighbours, OCHA said in its report. An assessment mission subsequently found as many as six families sheltering in one house.
On 15 April, the Taliban launched its “spring offensive” throughout the country, which was quickly followed by a counteroffensive by pro-government forces. Fighting has been raging in all seven districts of the province, with civilians caught in the crossfire, which has included the use of heavy artillery and airstrikes.
The situation is similar throughout much of the country. Of Afghanistan’s 34 provinces, 24 have recorded some level of forced displacement this year, and a quarter of those displaced are in areas that are difficult to access. 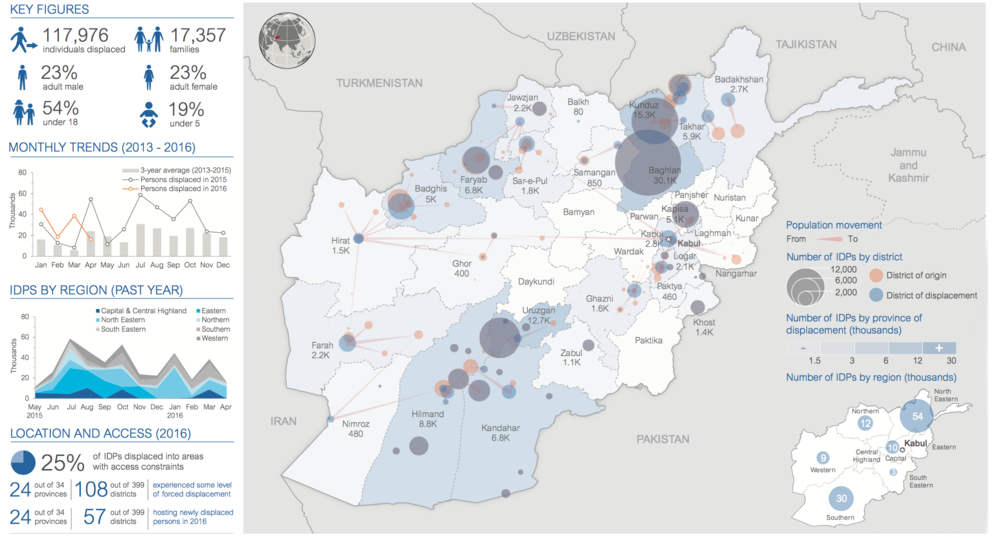 UN OCHA
Almost 118,000 people were displaced between 1 January and 30 April
Afghanistan’s rugged terrain adds to the challenges for agencies trying to provide humanitarian aid.
“We’re facing a double-edged sword,” said Winston. “We’re trying to reach people in remote areas, but also trying to reach people in conflict areas.”
For example, aid agencies know that 10,500 people are displaced in Dehrawud District in Uruzgan Province, but they can’t reach them. Agencies were initially able to conduct an assessment and found urgent health concerns, as well as food, water and shelter needs. But fighting has since blocked the road into the area, and displaced families have been stranded for weeks without help.
Likewise, the OCHA report notes, relief agencies have not managed to deliver aid to people displaced in districts outside of Kunduz City.
The situation doesn’t look like it’s going to improve anytime soon. Government security forces backed by their international allies are struggling to fend off the Taliban and other groups, while growing numbers of civilians are trapped in the middle.
All this has prompted some soul-searching among humanitarian agencies. The OCHA report asks: “In a year when the Taliban have gained more control of the countryside than ever before, is the UN and NGO part of the international aid community balanced to assist both sides of the conflict?”
jf/ag
Share this article
Join the discussion