Intense bombing raids by the Saudi-led coalition on the eve of a five-day truce have raised fears that the ceasefire may not hold or may not be enforced well enough to allow in much-needed humanitarian aid.

Clouds of smoke hung over Sana’a on Tuesday morning after a series of strikes around the capital. In one of the deadliest incidents in more than six weeks of bombardments, a weapons store on a hillside overlooking the city was hit late on Monday, killing 90 and injuring 300, according to reports.

Al-Thawrah public hospital was among the structures damaged by the force of the explosions, which ripped through a largely residential area causing widespread panic, with families running into the street fearing their homes would collapse.

But on Tuesday afternoon, the United Nations confirmed that the truce between the Saudi-led coalition and the Houthi rebels would go ahead as planned and announced the arrival in the country of the new UN Special Envoy for Yemen, Ismail Ould Cheikh Ahmed.

“The truce will be effective today at 11pm,” Abdullah Al-Mansour, information officer for the UN’s Office for the Coordination of Humanitarian Affairs (OCHA) in Yemen told IRIN.

A young boy injured in an explosion in Sanaa, Yemen, after a Saudi airstrike hit a weapons store in the city on Monday 11 May 2015 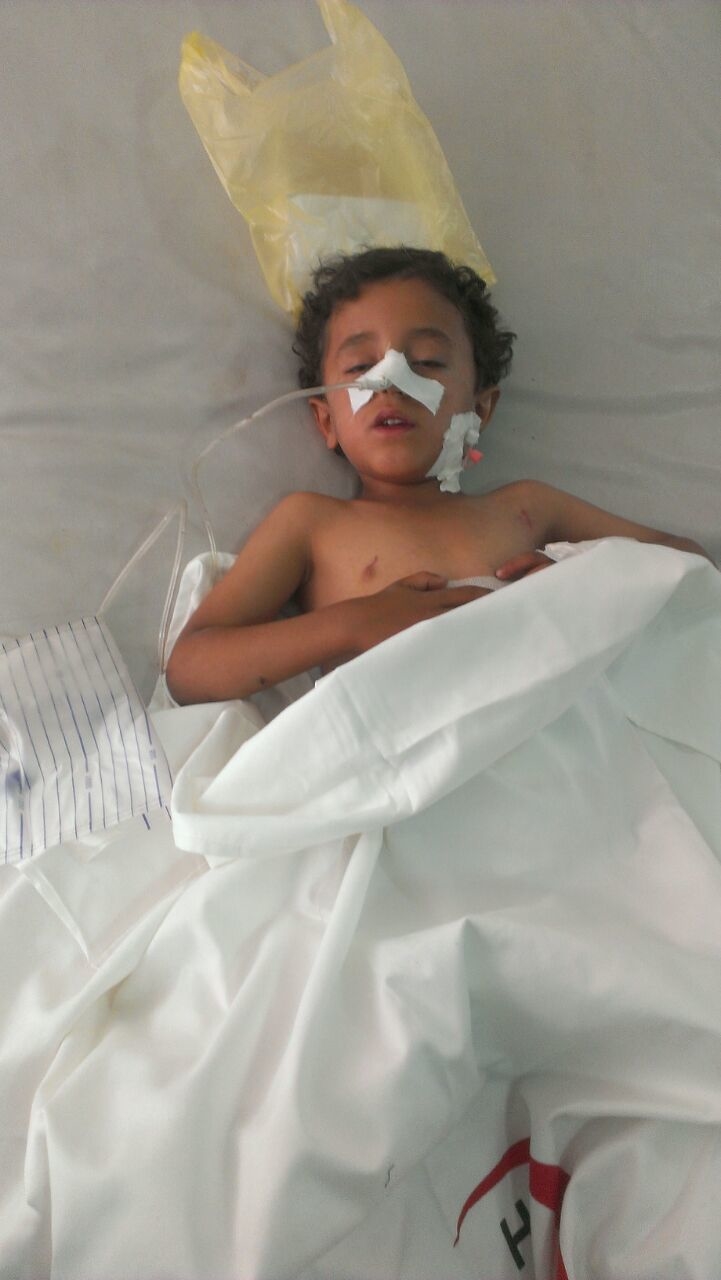 Some aid agencies have questioned whether the truce would really start or be properly enforced, given the escalation in airstrikes in Sana’a, Sa’ada, Taiz and Aden over the last 48 hours.

“We don’t know if there will really be a ceasefire,” said Marie-Elisabeth Ingres, head of mission in Yemen for Médecins Sans Frontières (MSF).

“We hope there will be, because at the moment the situation is very difficult as the bombing is happening all the time, limiting our movement and our access to people who need treatment.”

Ingres said her teams had been stuck for 10 days without new supplies because an airstrike that damaged the runway at Sana’a airport meant scores of incoming flights had been cancelled.

We don’t know if there will really be a ceasefire

“On Monday we received one plane and we hope that on Wednesday we will also receive another plane with some cargo to respond to the emergency,” she said.

Julien Harneis, Yemen representative from the UN’s children agency, UNICEF, said all indications were that the pause would go ahead.

“We will be bringing in medical as well as water and sanitation supplies, but Yemen is a country of 26 million people, and the most important thing is that commercial shopping activity and imports of food and fuel are allowed to resume.

“Access to water is a major problem without fuel. Yemen’s main population centres consume two million litres of fuel a month to power pumps, due to the water being located very deep underground,” Harneis told IRIN.

“For some time people have not been able to move because they have been terrified of being caught up in violence,” he added. “So another important aspect of the pause is that ordinary Yemenis get a chance to move around freely to be able to get to places and access services.”

Damage to a public hospital in Sanaa, Yemen, after Saudi airstrikes on Monday 11 May 2015 hit a weapons store and caused a series of explosions in the Noqum Mountain area of the city. 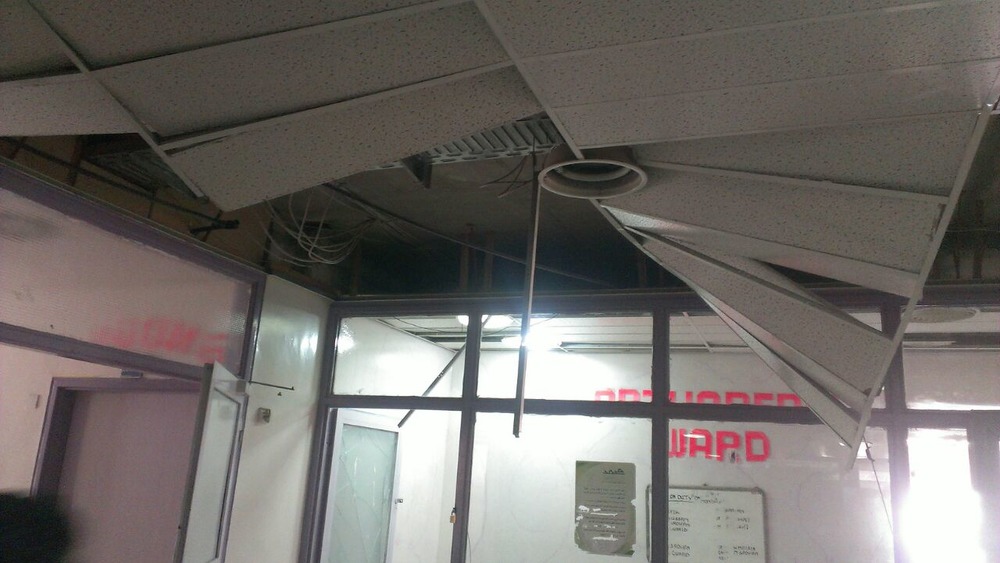 Hajir Maalim, Yemen country director at Action Against Hunger (ACF), told IRIN a major issue for his organisation and many others was the lack of fuel, which, in addition to affecting access to pumped water, had limited electricity supplies for hospitals and left vehicles immobile.

“It will be a significant development if we can get fuel into the country,” he said, speaking from Amman, Jordan, where he and the agency’s other international staff had been evacuated over safety concerns.

“That has been our major challenge over the past two weeks, the fact that we have had to suspend programmes because our teams cannot move around.”

But while Maalim welcomed the opportunity to bring in supplies, he cautioned against over-optimism.

“A number of NGOs are concerned that this type of humanitarian pause could be seen to legitimise the conflict and people are divided as to whether it is a good course of action or not,” he explained.

“The hope is that with one baby step like this, other steps can be taken after that,” he said.

“But really, it’s very hard to say whether the ceasefire will be kept strictly by all parties because there are so many different actors involved and the conflict is escalating rapidly.”

Smoke billows out after an explosion in the Noqum Mountain area of Sanaa, Yemen, early evening Monday 11 May, 2015. Airstrikes (believed to be from Saudi planes) hit a weapons supply in the area. The weapons supply belonged to the army, factions of which 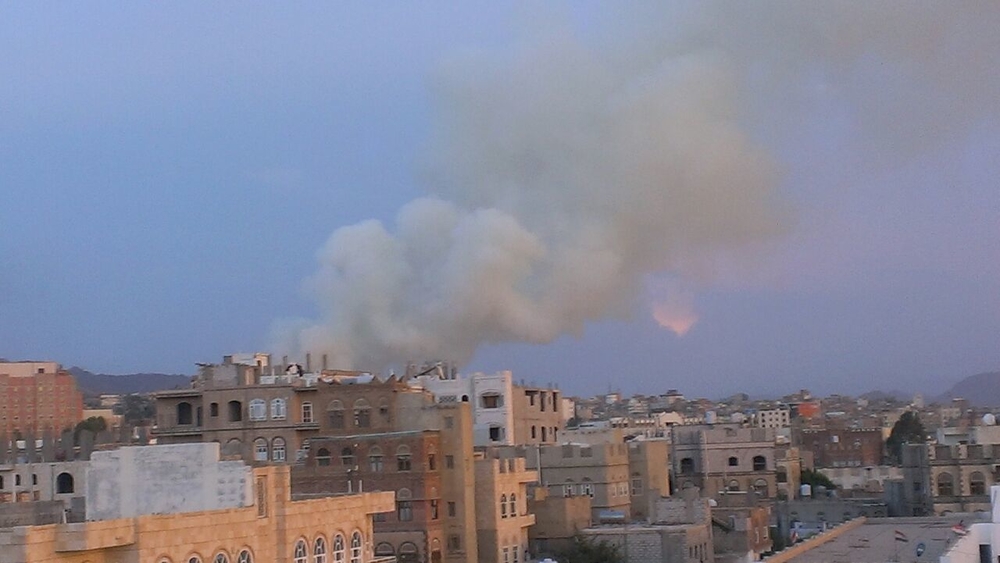 A number of aid agencies have already expressed doubts to IRIN about whether five days will be long enough to reach the large number of people in need of food, water and health care.

Banking on the “pause” going ahead, the World Food Programme (WFP) has sent fuel supply boats to Hudaydah, the country’s second largest port, and the UN’s refugee agency announced on Tuesday it was preparing to send in three cargo flights of aid supplies to Yemen over the coming days.

Yemen is the poorest country on the Arabian Peninsula and has been wracked by conflict for decades. This latest violence followed the decision by Saudi Arabia, backed by the United States and other Arab countries such as Egypt and the United Arab Emirates, to launch airstrikes against Houthi rebels, who the Saudis believe to be backed by arch-foe Iran.

Due to its history of conflict and weak governance, Yemen has limited institutions and poor services, and it relies heavily on imported food and fuel –largely blocked from entering during the recent violence.

Antoine Grande, the head of the Yemen delegation of the International Committee of the Red Cross (ICRC), said he hoped a break in fighting would allow better humanitarian access as well as a resumption of economic activity and imports, which have been stalled for some weeks due to the ongoing insecurity and violence.

“We need the private sector to be able to resume basic operations, so we really hope that a truce will allow suppliers to bring things into Yemen,” he said.

“If the container boats waiting outside Hudaydah are allowed to dock, and more importantly if trucks are then allowed to circulate and distribute their contents, that is what is needed most.”

According to UNHCR, more than 300,000 civilians have been displaced in the past six weeks, on top of an estimated 330,000 people uprooted by previous waves of conflict in the country.

The country’s 250,000 mostly Somali refugees and its one million Ethiopian migrants, who use Yemen as a route into Saudi Arabia, have also been caught up in the fighting.

As of 6 May, the civilian death toll had reached 1,527, OCHA reported on Monday, but an escalation of violence in the past week means that figure is likely to be substantially higher.