The odds were stacked against Guinea's vaccination teams. The initial side effects of the measles vaccine can easily be mistaken for the first symptoms of hemorraghic fever and a false rumour had spread blaming the distribution of deworming pills in late 2013 for bringing Ebola into the country.

But thanks to an exhaustive door-to-door effort, promoting the benefits of the vaccine and dispelling myths about Ebola, nearly 100,000 children between the ages of six months and 10 years in Guinea’s southeastern Gueckedou region are now protected against the highly contagious measles virus.

Local communities were understandably suspicious of health workers and Western medicine, but many of them were open to persuasion, so health teams went around from village to village, talking to families and trying to ease their concerns.

“Some people were quite afraid,” Anne Marie Sagno, a supervisor of the campaign from the World Health Organization (WHO) who is based in Gueckedou, told IRIN.

“But we launched a strong (awareness) campaign in the lead-up to the vaccination week and have been working with local mosques, churches and traditional leaders to help educate people about the importance of vaccinating their children.”

The UN’s children agency, UNICEF, which is supporting Guinea’s health ministry and supplying the vaccine, says the drive aims to reach 1.3 million children across the country by the end of May.

West Africa's Ebola epidemic began here in December 2013 and the rumour mill has been working overtime ever since.

Health workers say that during “normal” vaccination campaigns in Guinea they usually try to reach around 300 children per district each day at fixed health stations, and 200 or so more via mobile teams.

“The situation here is different now because Ebola passed through here,” said Fara Sekou Leno, who runs the health clinic in Nongolo, a village near the town of Gueckedou.

“People keep asking me: ‘If I take this vaccine, if I give my child this vaccine, will there be another epidemic?’ We have reassured them and educated them… but they are scared still.”

Children wait for their measles vaccine in Guinea's Gueckedou in April 2015. Vaccination teams had to overcome widespread fears related to the Ebola epidemic 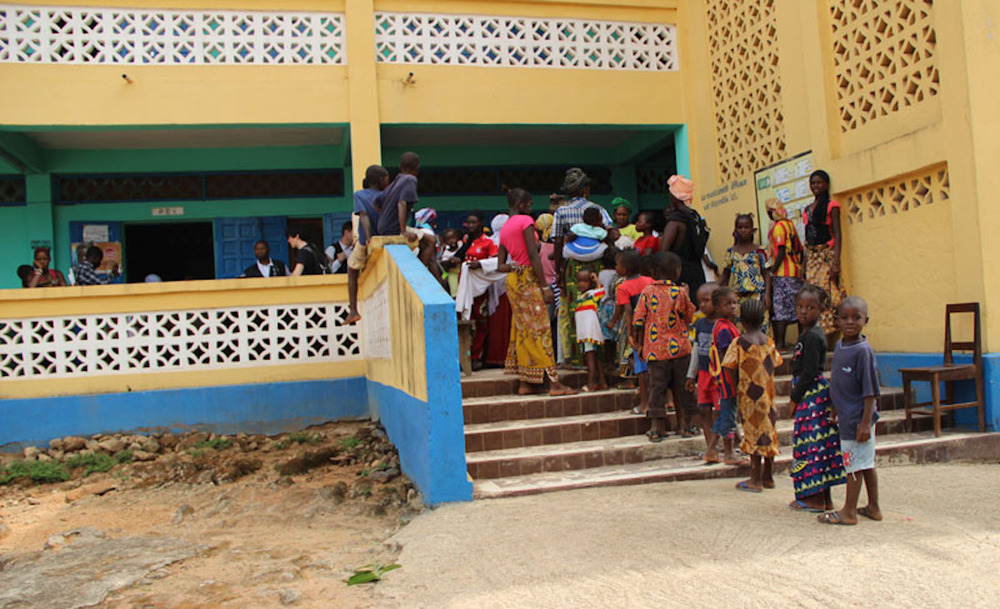 Leno said he explains to each family why the measles vaccine is important and, of course, stresses that it will not give anyone Ebola.

He also helps people understand that side effects, such as temporary aches or a low-grade fever, which can be similar to Ebola-like symptoms, are normal, and that while these symptoms should be monitored, it does not mean their child has Ebola.

The message gets through

In Gueckedou, where the campaign kicked off on 18 April, the aim was to reach 95 percent of the 89,473 children targeted in the region. As of 27 April, UNICEF said it had exceeded this figure comfortably.

“We had quite a good turnout,” said Mariam Balde, who runs the vaccination unit at the Madina Health Centre in Gueckedou. “Here, in this neighborhood, fear is no longer a problem. People are well-informed. But in other communities, yes, there is still resistance.”

Catherine Koumba Millimouno, a mother-of-six from Gueckedou’s Nongolo village, said the only reason she came to vaccinate her children was because a local doctor had come to her home the day before to speak with her.

“With Ebola, I was very afraid of vaccines,” she told IRIN. “Even last week, if someone had come to my door with a vaccine, I would have completely refused. But today my children have been vaccinated and they play in good health. Next time I will also vaccinate my children. I don’t want them to get sick.”

In some cases, it was the children who persuaded their parents.

“Vaccinations are very important for my health,” said 10-year-old Mamadi Cherif, who was among the first in line at his clinic on day one of the campaign, dropping in on his way to a football match. “I’m not afraid of getting sick when I’ve been vaccinated because it protects me from sickness.”

“Vaccines are good for you,” he told IRIN. “They help a lot of people. They save lives. I will always stay in good health with vaccines. That’s why I told my parents I wanted to come today. I don’t want to get sick.”

Not all parents, however, were willing to vaccinate their children just yet.

Mamadou Ballo Diallo, chief of the Jbangbassa neighbourhood, has been helping to educate his more than 6,000 constituents about vaccines, and has tried to set an example by bringing his own children to the clinic.

Even though his community hasn’t had a case of Ebola in several months, he said the fear of the unknown persists.

“You see, not everyone has the same level of comprehension. Some people were already afraid of vaccines and we don’t know what will bring it [Ebola] back, and so people are afraid of everything.”

"There has been no Ebola here for a few months. There have also been no vaccines. Is that a coincidence?"

In the village of Gbangbeta, angry pupils chased health teams off the school grounds after the headmaster refused to allow the vaccinations.

Resistance was typically more passive. Teams often had to move on after being told there were no children in the household, or else they were given a polite, “No thank you.”

“For the moment, I just cannot vaccinate my children,” said Michel Kamano, a father of four children between the ages of two and seven. “Before Ebola, we regularly vaccinated our children, but now I’m not sure. Some people say it was the vaccines that brought Ebola here. So I don’t know what to believe.”

Kamano said he may change his mind in a few weeks if the children who have already been vaccinated don’t get sick.

“I’m not against vaccines,” he told IRIN. “But in this case, I need to know more. There has been no Ebola here for a few months. There have also been no vaccines. Is that a coincidence? I don’t know. I don’t want my kids to get sick, but I don’t want them to die because I gave them something [a vaccine] I know nothing about.”