How do you vaccinate women and children against polio in remote areas prone to attack from Boko Haram militants? Arm the soldiers with vaccine.

This is exactly what has happened with great success in northern Cameroon.

In addition to acting as a security presence, officers, who normally patrol the frontlines and at-risk border communities, are also trained to administer polio vaccines – a tactic the government says has been key to the successful campaign.

It allowed children in even the most dangerous areas to be vaccinated, as well as refugees the moment their families crossed the border.

“It is our role to protect the population and prevent them from whatever danger, including health threats,” a Cameroonian commander, who wished to remain anonymous, told IRIN. “So we are simply adding more value to the work that we are already doing.”

Military personnel also engaged with community leaders and radio stations to spread word of the importance of the vaccinations.

“In my locality, I make sure that my people get excited and look for the vaccinators,” said a chief called Lamido from Guidiguis in far northern Cameroon.

Turning the corner after 18 months

As a result of the military involvement, the polio vaccination drive in the Far North Region has surpassed this year’s goals in spite of the challenges posed by Boko Haram and the massive influx of refugees from Nigeria.

The latest campaign, which took place 27-29 March, reached 1.4 million children under the age of five – nearly 100,000 more than initially targeted, according to the UN Children’s Fund (UNICEF).

“Despite the security challenges, polio vaccination campaigns have been registering better results over the past months as a result of increased military presence and [military] participation in the vaccination process,” said regional health ministry official Flaubert Danbe.

Recent progress comes after more than 18 difficult months trying to contain polio, which broke out again in Cameroon in October 2013. 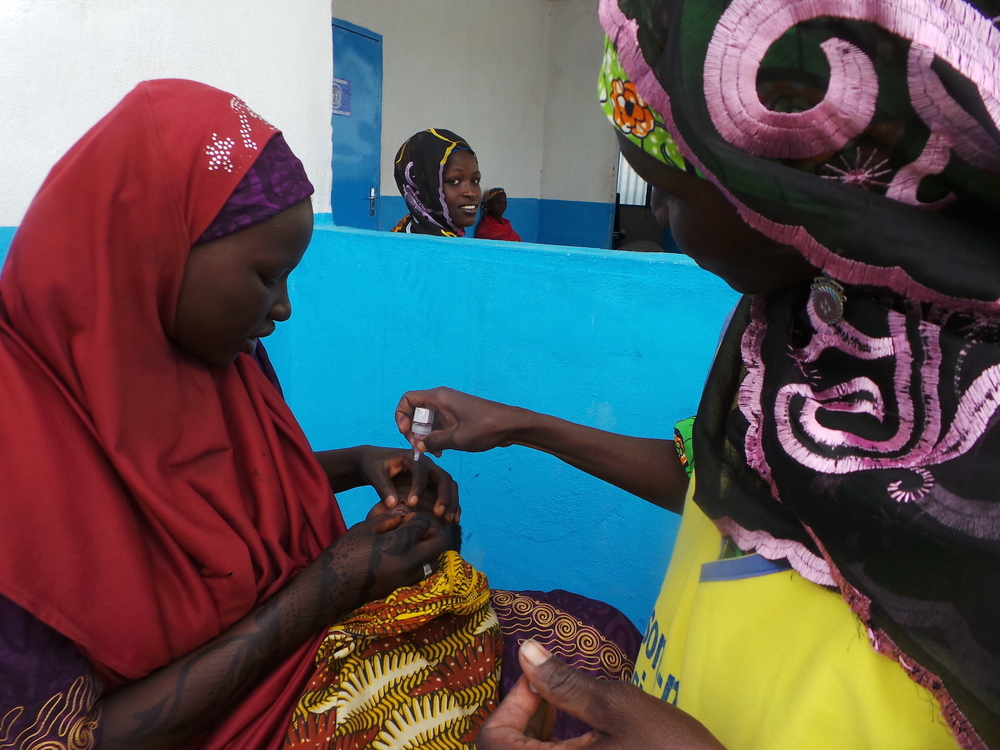 At least 13 previous immunization campaigns were at least partially thwarted by Boko Haram-related violence, or resistance from refugees from neighbouring Nigeria, where polio is endemic.

In 2014, childhood immunization rates in Cameroon stood at just 60 percent, according to the Ministry of Health – a figure well below the 90 percent minimum needed to eradicate the disease.

Cameroon has had no new cases of polio in more than six months and was downgraded from a polio-exporting country on 31 March, but the World Health Organization (WHO) still considers it to be at “high risk” due to the challenges in administering the vaccination and the ongoing refugee problem.

The number of Nigerian children not vaccinated against polio increased from 778,000 in November 2014 to 1.1 million in January 2015, according to UNICEF. Just one cross-border case could restart an outbreak in Cameroon, authorities say.

Immunization campaigns in the region have been plagued by insecurity since the beginning of 2014, when Boko Haram began to extend its attacks from Nigeria into Cameroon.

At least nine of the 30 health districts in the Far North Region have been affected, with women and children the ones most likely to miss out.

“Access to health care systems by the local population is difficult as some clinics have been closed as a result of the [insecurity],” a UNICEF’s spokesman told IRIN.

The influx of Nigerian refugees into northern Cameroon has also put a strain on local health care services, which are not well enough equipped or staffed to handle large caseloads. Many local health workers have fled the area, further straining already limited resources.

“The exodus of Nigerian refugees across communities and the internal displacement of the population are among the challenges… coupled with the inaccessibility of population still living in risky areas,” UNICEF said.

More than 74,000 Nigerians have taken refuge in Cameroon due to Boko Haram attacks, according to the UN Refugee Agency (UNHCR).

Eastern Cameroon is also host to the largest number of refugees from the Central African Republic – around 200,000 people, according to the latest figures from UNHCR.

An estimated 117,000 Cameroonians living in border communities have also been displaced within the country’s Far North Region, the UN Office for the Coordination of Humanitarian Affairs says.

This constant movement of people makes administering the vaccination to children particularly difficult. The oral vaccine requires three two-drop doses, usually given four weeks apart, in order to be fully effective. As people flee one attack to the next, it is challenging for health workers to keep track of their whereabouts and follow up on the booster doses.

For Nigerian newcomers not vaccinated upon arrival in Cameroon, campaigns are conducted on a near constant basis in the refugee camps.

“The vaccination of the displaced is an ongoing process and vaccines must be available to be given to every new arrival,” the UNICEF spokesperson said.

Each refugee who enters a camp is vaccinated against both polio and yellow fever, among other diseases.

But polio vaccination has faced strong resistance within conservative Islamic communities in northern Nigeria due to a deep distrust of the West, persistent rumours that the vaccine is harmful, and the house-to-house approach taken by immunization campaigners, which many see as intrusive.

Garba Dauda, a vaccination agent at the Minawao refugee camp, said many Nigerians there originate from places where polio immunization has a bad name.

“Some refugees used to oppose vaccination at first, but we have managed [with education campaigns] to change people’s mentality and now they are more receptive,” Dauda said.

Cameroon’s health ministry say they now plan to extend this type of vaccination campaign to the east of the country.