High-level officials from 78 countries and more than 40 international organisations are gathering in Kuwait City to take part in the Third International Humanitarian Pledging Conference for Syria on Tuesday, amid major concerns of funding shortages.

The 2015 Syria Response Plan appeal for US$2.9billion is only 9 percent funded so far and the Syria Regional Refugee and Resilience Plan’s appeal for US$4.5bn just 7 percent, according to the UN’s Financial Tracking System (FTS).

Since March 2011, 7.6 million people have been internally displaced within Syria, 3.8 million have fled overseas to become refugees and large parts of the country have been destroyed.

The scale and complexity of the response – at a time when the world is also facing other major crises such as conflict in the Central African Republic, South Sudan and Iraq and Ebola in West Africa - has stretched humanitarian resources to the limit.

As a result, a number of UN agencies have had to scale back their aid delivery, including the World Food Programme (WFP), which earlier this month announced it would have to “further prioritise” its food voucher scheme in Jordan. 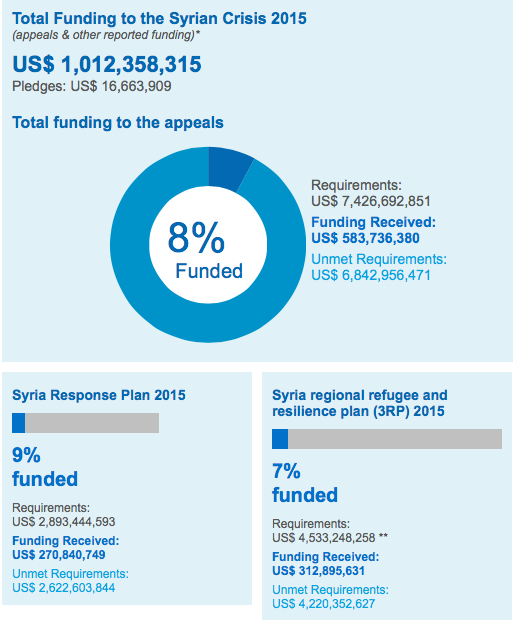 The conference is a key opportunity for UN and other aid agencies to raise money for their programmes.

After speeches and presentations about the crisis, each participating donor will be given three minutes to make a statement and if they wish, pledge funding.

Ahead of the pledging conference, Chris Gunness, spokesperson for the UN agency for Palestine refugees (UNRWA), which is asking for $415 million to support more than 550,000 Palestine refugees registered in Syria, said: “If we do not receive funds immediately at the Kuwait conference, the programme of cash assistance to nearly half a million people will halt in a matter of a few days.”

“Four years into the crisis, the humanitarian appeals are already stripped back to contain the bare minimum,” noted Andy Baker, who leads Oxfam’s Syria response.

“With inadequate aid funds, more people in need will have to resort to desperate survival strategies such as child labour or early marriage,” he added, saying since the start of 2015 funding had “trickled in painfully slowly”.

“We urgently need to find ways to meaningfully shore up livelihoods and basic services such as health, education and water wherever possible through longer term interventions,” the statement said.

Iyad Nasr, Middle East and North Africa regional spokesman for the Office for the Coordination of Humanitarian Affairs (OCHA), told reporters in Kuwait that is was vital that money was forthcoming to support young people and keep them in education.

"A full generation is being lost, and we are here to prevent the irreversible damage that could take place,” he said.

While the primary focus of the conference is raising cash, according to Eva Svoboda, a research fellow at the Humanitarian Policy Group (HPG) at the Overseas Development Institute (ODI) in London, the meeting is also a way to keep Syria on the international agenda.

“It’s not only about the money, it’s also a lot about about raising the profile of the crisis,” she told IRIN. “There is always a hope that when you have more media attention, that will push political actors to act because while money is urgently required, what Syria needs most of all is a political solution.”

The conference is being hosted for the third year running in Kuwait, which according to Oxfam - using a calculation of aid allocated compared to Gross National Income (GNI) – was the most generous donor to the Syria response in 2014.

The Oxfam figures show fellow Gulf States Qatar, the United Arab Emirates and Saudi Arabia, were also among the most generous donors last year, along with Norway, the United Kingdom, Germany, and the United States.

According to their calculations, the five donors who gave the least (in relation to their GNI) were: Iceland, Republic of Korea, Russia, Slovakia and Australia.

Svoboda said that Kuwait’s hosting of the pledging conference was an indication of how countries in the Middle East were increasingly playing a larger role in humanitarian response.

“It’s partly about asserting themselves, but there is also a sense that this crisis is in their territory and they feel they need to take some ownership, and I think that is welcomed by Western donors,” she said.

The details of what is pledged this year will be announced in the coming days. 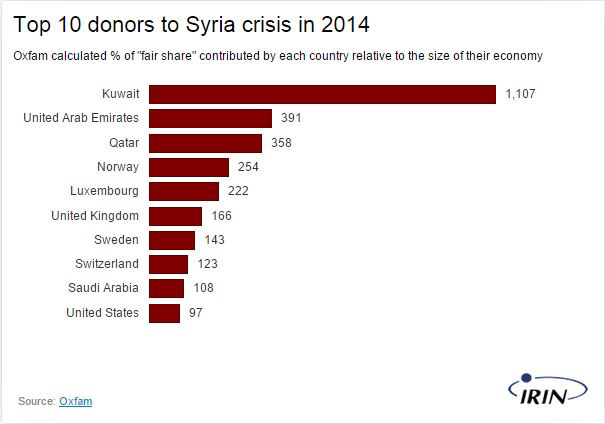