As waters continue to recede after floods that have affected more than 2.5 million Pakistanis, health experts warn a further crisis may be unfolding with thousands of communities at risk of vector and water-borne disease.

In its latest Pakistan flood report, the World Health Organization (WHO) highlights a high risk of dengue, malaria, and even cholera outbreaks among the many thousands of families surrounded by large areas of stagnant water. A lack of clean water, sanitation and hygiene systems as well food insecurity and a shortage of accessible medicines are all compounding the threat.

Muhammad Fawad Khan, health cluster and emergency coordinator at WHO, Islamabad, told IRIN: “Due to stagnant water - an ideal breeding ground for mosquitoes - the risk of an increase in dengue cases, malaria and cholera outbreak is high, as water sources are contaminated.” The first outbreaks, he warned, could occur within weeks.

In the village of Jindyana in Jhang District in Punjab, father of five Bashir Ahmed said his children were suffering from diarrhoea, infections and eye problems. His house and his crops were washed away in the flood and he and his family have been sleeping in the open. “We have barely eaten in days and I am worried about my children. But there are no medicines and no dispensary within a day’s walk.”

The latest floods, which began in the first week of September, are the worst the country has seen since 2011 and are believed to have affected Punjab, the country’s “bread basket”, worse than any floods in 40 years.

Some 2.4 million acres (971,000 hectares) of standing crops have been lost. More than 350 people were killed, according to official statistics, but some observers believe the number may be higher and will not be known until more detailed assessments are complete. Access to some remote areas has only been possible within the last few days, with many roads under water, adding to the difficulty of assessing the true extent of the damage.

And the troubles are likely to get worse before they subside, with an uptick in disease now a real danger, according to WHO.

The WHO report also cited increases in acute respiratory infections, diarrhoea and skin diseases, borne out by villagers across two of the worst-affected districts in Punjab - Hafizabad and Jhang. Just days following the flood, which in some parts saw a surge of water 10 feet deep wash entire villages away, emergency assessment teams from the Pakistan Red Crescent Society (PRCS) encountered children with diarrhoea, eye infections and the early signs of skin disease.

Further south, as flood waters receded, PRCS teams encountered more villagers who had not received any assistance, more than a week after the emergency. Here, villagers in Rashidpur Wala had little food and the teams saw children clearly suffering from skin disease and infection.

"You can see in their eyes the children are not well. They have fevers and have signs of skin disease.  Many children in the village have diarrhoea. I see them grow weaker every day"

Farmer Muhammad Ejaz, a father of three from Rashidpur Wala in Jhang District, said his house was badly damaged by the floods which had also ruined his three-acre crop of sugarcane. The fields surrounding his hamlet were still under three feet of stagnant water. He told IRIN: “You can see in their eyes the children are not well. They have fevers and have signs of skin disease. Many children in the village have diarrhoea. I see them grow weaker every day. But there is no medicine and the nearest dispensary is in Jhang City, about 10 miles [16km] away.”

While national and local government agencies led the evacuation and rescue effort, PRCS has been supported by the International Federation of the Red Cross and Red Crescent Societies (IFRC), one of the first international humanitarian organizations to respond to the emergency.

Immediate assistance has focused on a series of food distributions. Since then, the PRCS operation has been expanded and the IFRC has launched an international emergency appeal for additional funding of US$3 million to support more than 227,000 people. Its operation will focus on increased food and relief item distributions, water and sanitation, health and hygiene promotion, psychosocial support and emergency shelter assistance.

Ghorkhmaz Huzeynov, head of delegation, IFRC Pakistan, said: “The Emergency Appeal will complement Pakistan Red Crescent’s floods response with food distributions and health services, while also covering hygiene promotion activities. These are the immediate needs that have also been identified by the recent Multi-sector Initial Rapid Assessment [MIRA] undertaken by the authorities.”

Muhammad Hussein, a resident of the Jhang area of Pakistan, looks out over the flood-devastated territory. His home was destroyed in the floods which affected over 2.5 million people. 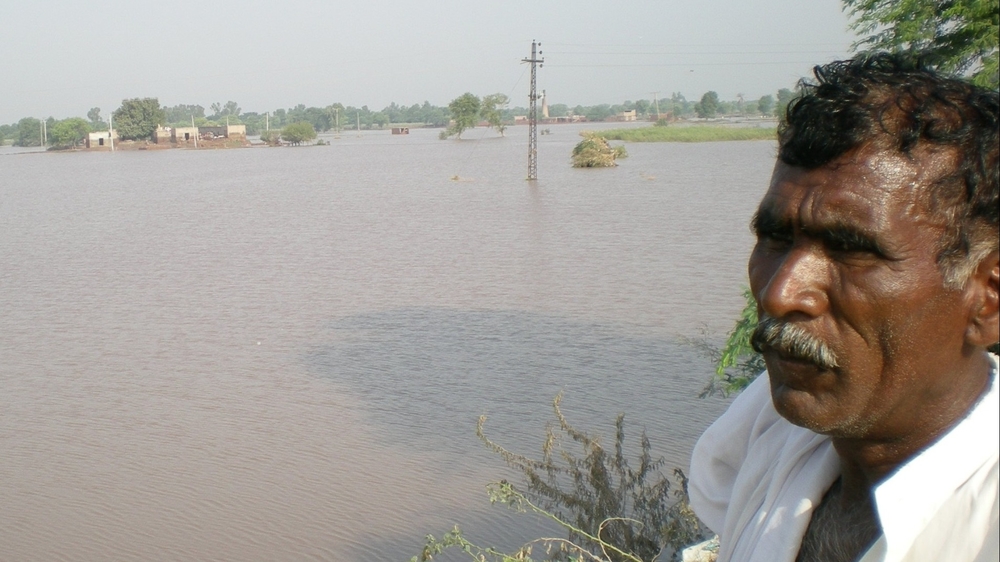 International NGOs are also understood to be engaged in emergency response activities, coordinating with appropriate local authorities, mainly within the flood-affected areas in which they already have projects.  Nargis Khan, policy and communications adviser for the Pakistan Humanitarian Forum (PHF - representing more than 50 international NGOs operating across the country), said: “INGOs continue to work on the ground through partners and directly delivering emergency assistance in Punjab and Azad Jammu Kashmir, working in food security, livelihoods, emergency shelter, Non-Food Item distribution, health, and water, sanitation and hygiene. Others are ready and willing to respond. Once the Government approves and finalizes the MIRA [report] organizations will work with the Provincial Disaster Management Authorities and other actors to support next steps.”

Meanwhile, efforts to strengthen a coordinated approach to meet immediate needs and move towards longer-term recovery are gathering pace. The initial assessment of damage caused by the late monsoon rains - and immediate needs - have been shared by government officials at a special briefing, at which it called for ideas and cooperation from international agencies.
Following the briefing, the government said it aimed to create a framework of action for flood recovery and called for ideas from the international community, represented at the 3 October meeting by key Western donors.

Annette Hearns, acting head of the UN Office for the Coordination of Humanitarian Affairs (OCHA) Pakistan, described the government move as a “positive step”. She said: “The minister of finance [Muhammad Ishaq Dar] invited ideas from the international community to establish a mechanism for effective flood recovery efforts in a transparent manner.”

Many flood-affected communities were already moving towards recovery, she said - and their needs would be central in shaping support initiatives in coordination with local and national government bodies in the weeks and months ahead.