One year after a violent siege terrified the southern Philippines city of Zamboanga, tens of thousands of displaced survivors feel they have been forgotten.

The attack by the Moro National Liberation Front (MNLF), a secessionist group, on the port city on 9 September 2013 initially displaced 120,000 people.

Today, around 40,000 remain homeless, according to government estimates; many live in crowded evacuation centres where disease outbreaks are a constant spectre and access to food and water limited, survivors and aid workers say.

"When will they finally help us find new homes?" asked Subaira Ajirul, a single mother of 10 whose family live inside the rundown city stadium that some of the displaced have called home for a year.

"It seems they have already forgotten us. It has been one year, and look at us - we're still hungry, fighting for space and are dying little by little every passing day," the 54-year told IRIN as she queued for an overflowing latrine in the muddy grounds of the Joaquin Enriquez Memorial Sports Complex. According to the International Committee of the Red Cross (ICRC), the stadium houses around 15,000 people today.

During a 20-day siege on the city, the 500 heavily-armed MNLF combatants burned around 10,000 homes, held hundreds hostage and engaged in intense gun battles with government security forces. Some 100 rebels and dozens of police and soldiers were killed. Rebel leaders absconded following the fight, and recovery efforts have left the city in a shambles.

"Our lives have been turned upside down. Look around you. It is smelly, dirty and some just defecate into plastic bags or openly. Many have forgotten to live with dignity," said Ajirul.

According to an August 2014 report by the UN Office for the Coordination of Humanitarian Affairs (OCHA), disease outbreaks in the camps have left about 160 evacuees dead, many of them children.

ICRC said the emergency threshold of deaths for children below five years old (more than two cases per 10,000 per day) was breached six times in the past year. Among the main killers were pneumonia and gastroenteritis, and there were at least two dozen cases where the cause of death remained unknown.

Gabriel Daclan, an ICRC representative in Zamboanga, said aid workers had been struggling to bring some sense of normalcy to the camps, with sanitation remaining one of the major concerns.

"It is very difficult for everyone, but at the end of the day the most important thing is to work towards ultimately giving these people back their dignity," he said.

"The wounds have not healed, but we are trying to restore confidence to the people," said Zamboanga mayor Beng Climaco, adding that she acknowledged the persistent problems in the camps.

"We are not very pleased with the number of deaths [from disease among displaced populations]. That is why we have to work very hard to ensure these deaths are diminished," she said.

Young boys await food at an evacuation center, Zamboanga city, one year after a deadly rebel siege on the city displaced 140,000. 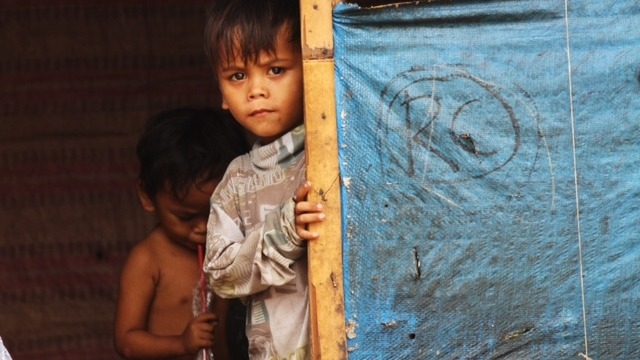 Just two months after the violence in Zamboanga, the Philippines was throttled by one of its biggest storms in history, Typhoon Haiyan (local name Yolanda), which affected more than two million people and stretched humanitarian resources thin. The Internal Displacement Monitoring Centre (IDMC) said "Haiyan overwhelmed the response capacity of both the government and its international humanitarian partners, whose resources and personnel were already stretched by previous emergencies."

According to OCHA figures, while the US$776 million response to Haiyan was 67 percent funded, the $12.8 million Zamboanga response only reached less than half of its fundraising target.

"It is a very difficult life"

Despite such limitations, some Zamboanga residents are piecing their lives back together, rebuilding their homes with materials donated by government; others have earned - including through remittances, which make up nearly 10 percent of the country's economy - or borrowed their own money to finance reconstruction.

For 61-year-old Benjamin Leonardo and his family, returning to the bullet-riddled walls of what was left of their home in Zamboanga's Santa Catalina District - one of several villages where the fighting was concentrated - was better than staying at the evacuation centre.

Leonardo and his wife, who has a physical disability, along with their three children and several grandchildren, have rigged up a temporary roof of tarpaulin and metal sheets, but the home has no electricity or toilet. The remains of a torched front door at the front of the house are a stark reminder of the brutality of the attack.

Marines soldiers patrol a community in Zamboanga City. One year after a deadly Muslim rebel siege on the city, the area remains insecure. 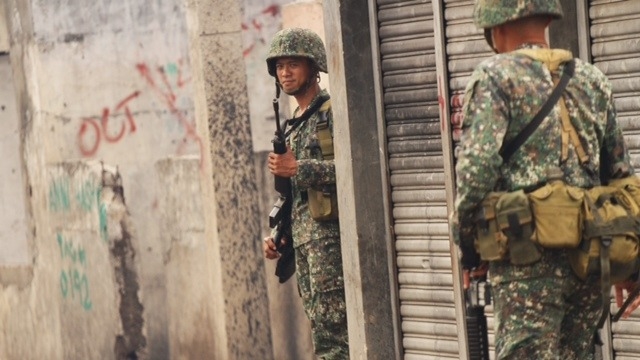 "It is a very difficult life, but we are trying our best to live," said Leonardo, whose daughter and five grandchildren were among those held hostage for days by the MNLF gunmen.

Nearby, Marines are stationed in an encampment and patrol the area. Even when the violence subsided after 20 days of fighting, MLNF leaders were not apprehended and remain at large today.

The 2013 Zamboanga battle underscored the complex problems faced by the government in quelling a decades-old Muslim rebellion that has left about 150,000 dead and mired many areas of the mineral-rich south in poverty.