International aid workers forced to flee western Myanmar after being targeted by Buddhist mobs last week say they need to return to Rakhine State to help with food and water distributions for displaced people.

"We need to be there. We need to provide services to the people in the camps. It is absolutely necessary for us to return," Solidarités International, told IRIN.

"We have to resume our work as soon as possible," Stephan Maurer, country director of the Danish Refugee Council, agreed.

Less than a week ago a series of attacks by unidentified Buddhist groups on international aid workers prompted the temporary relocation of more than 120 international staff, as well as 50 UN staff.

Hundreds of protesters threw rocks at homes and offices in Sittwe, the capital of Myanmar's western Rakhine State, starting from 26 March after a foreign aid worker with Malteser International allegedly handled a Buddhist flag outside the NGO's office with disrespect.

The offices of at least two UN agencies and a number of NGOs, as well as guest houses accommodating aid workers, were vandalized, damaged, or looted.

The attacks highlight an increasingly difficult working environment for humanitarian staff in Rakhine State, where hundreds of people were killed and more than 140,000, mostly Muslim Rohingyas, were displaced following sectarian violence between ethnic Rakhine Buddhists and the minority Rohingya population in 2012.

In February the government ordered Médecins Sans Frontières (MSF)-Holland to cease operations in the area in an apparent response to a growing public perception that aid from international NGOs was being unevenly distributed, with greater assistance being provided to displaced Muslim Rohingyas than the ethnic Rakhine population.

"We're very concerned about the impact this will have on vulnerable people and the IDPs [internally displaced persons]," Pierre Péron, spokesman for the UN Office for the Coordination of Humanitarian Affairs (OCHA), which coordinates aid delivery to the camps with the state government and NGOs, said from Yangon, emphasizing the important role of international NGOs on the ground.

A young Rohingya girl pumps water at an IDP camp outside Sittwe, western Rakhine State. With the onset of monsoon rains, water and sanitation has taken on greater importance 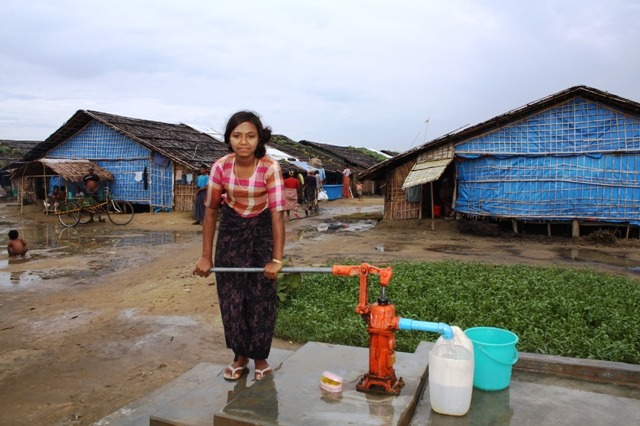 "We're working with the authorities on short-term solutions to ensure that people don't run out of food and water, but in the medium and long term, the international NGOs need to come back as soon as possible," he said.

According to Solidarités International, more than 10 percent of the IDPs will run out of water within nine days, with many camps dependent on trucks or boats for its delivery. The camps facing immediate water shortages are in Pauktaw Township, where as many as 16,000 IDPs will run dry very soon, while some may already be without.

"We're already at the peak of the dry season [November to April] so water availability is a key concern, particularly in the IDP camps in Pauktaw where water has to be brought in by boat, much of it done by NGOs," said Péron, noting that the government and UN are currently working together to get water in where needed.

Food availability for camp residents is also a concern. "Thankfully, food stocks in Sittwe belonging to WFP [World Food Programme] were not looted and IDPs currently have enough food through mid-April. It will, however, be challenge to distribute food in the coming weeks without [full] NGO support, but we're hoping to do that with the staff we have available," Péron added.

UN agencies and most international NGOs currently only have telephone access to the camps, aid workers said. UN staff who have not been evacuated are currently working from a hotel in Sittwe where security has been beefed up with 10 police officers and extra security guards.
Meanwhile, Solidarités International said the evacuation of most of its staff had drastically limited its capacity to provide assistance. Its permanent staff in the camps and a "remote management" system it had put in place allows it to continue to provide some "life-saving activities" in most of the camps it works in only "for a few more days", while Save the Children has scaled back its work to essential services, a programme manager from the NGO, confirmed.

On 30 March, UN Secretary-General Ban Ki-moon called on Myanmar to ensure the safety and security of all humanitarian workers in the wake of last week's attacks, while on 1 April, Renata Lok Dessallien, the UN resident representative and humanitarian coordinator for Myanmar, as well as UN agency country heads, travelled to Sittwe to meet government officials to assess the situation.