The UN warned this month that acts committed by both sides in the South Sudan crisis could amount to crimes against humanity, and urged parties engaged in peace talks to establish mechanisms to ensure accountability for the violence.

"What I saw was a horror,” said Ivan Šimonovic, UN Assistant Secretary-General for Human Rights, at a press conference in Juba on 17 January. "The priority is to achieve a ceasefire - but to transform a ceasefire into sustainable peace, more will be needed than bilateral talks."

The United Nations has received accounts of mass killings, extrajudicial killings, arbitrary detention, enforced disappearances, sexual violence, the widespread destruction of property and the use of children in conflict. These are serious violations of international law, said Šimonovic. He noted that his office will be publishing a report on human rights violations, and stressed that independent monitoring and public reporting is critical.

“Those who committed these terrible crimes, who ordered them or those who did nothing to prevent them while they were in a position to do so, all these people should be held accountable without delay,” Šimonovic said.

Amid investigations into civilian deaths, allegedly at the hands of security forces in South Sudan, the army has made several arrests and others are expected.

And the African Union is in the early stages of setting up a commission of inquiry “to investigate human rights violations and other abuses committed during the armed conflict in South Sudan and make recommendations on the best ways and means to ensure accountability, reconciliation and healing among all South Sudanese communities”.

According to the AU, the commission is “expected to contribute in addressing the plight of the victims and assist the people of South Sudan to devise a comprehensive strategy on how to build their young nation, reconcile their differences and deal with root causes of the current crisis to avoid its recurrence and bring about lasting and sustainable peace”.

This crisis may present an opportunity to address the issue of impunity for past crimes. Decades of conflict, not only between Sudan in the north and what is now South Sudan but also between different armed groups in the south, have left deep scars among the population.

"No one in South Sudan has ever been held accountable for anything," said David Deng, director of the South Sudan Law Society, at a Rift Valley Institute forum in Nairobi. The Comprehensive Peace Agreement (CPA) - signed in 2005 by Khartoum and southern rebels, paving the way for South Sudan’s independence - did nothing to hold the instigators of violence culpable, Deng said. "We see in the CPA itself a vague reference to national reconciliation but nothing in terms of real accountability for past human rights violations."

Past military rebellions were granted amnesty and rewarded with reintegration deals to maintain peace, supported by President Kiir. "His one real main asset is his ability to bring these so-called spoilers into the fold,” said Deng. “We need to revisit this. If this situation has taught us anything, it's that what is in our short-term interest doesn't always work in our interest in the long-term."

Truth commissions, trials, reparations, and hybrid or international courts are all possible means of achieving accountability, according to the authors of Crisis and Opportunity in South Sudan, published by the United States Institute of Peace. Commentators agree that the local justice system in South Sudan is not capable of prosecuting these crimes.

South Sudan has not acceded to the Rome Statute of the International Criminal Court, so if it became appropriate, the Security Council would need to authorize investigations.

Human Rights Watch has called on the UN to also “impose a travel ban and an asset freeze on anyone credibly identified as responsible for serious abuses and violations of international human rights and humanitarian law”.

“Since South Sudan lacks a functioning judicial system, the spectre of impunity or rushed military prosecutions is very real,” said John Prendergast, co-founder of the Enough Project, when testifying before the US Senate on the situation. “Credibly holding perpetrators responsible for crimes committed in the past three weeks will require setting up independent mechanisms for investigation and prosecution.”

Prendergast and Deng both suggest some form of hybrid court, involving a combination of national and international lawyers and judges, which would serve the dual purpose of developing the national legal system. "The fact that it happens in or near the conflict-affected state gives a degree of ownership over the process to the country, whereas the international involvement maintains the credibility and gives it the support that's necessary," Deng said.

An ideal outcome would be for a mechanism to establish accountability built into the peace agreement being hammered out in Addis Ababa, Deng notes. Previous hybrid courts have been used in conflict scenarios in Sierra Leone, Lebanon, East Timor and Cambodia.

Ivan Šimonovic, UN Assistant Secretary-General for Human Rights, speaking at a press conference in Juba, 17 January 2014, about the crisis in South Sudan. 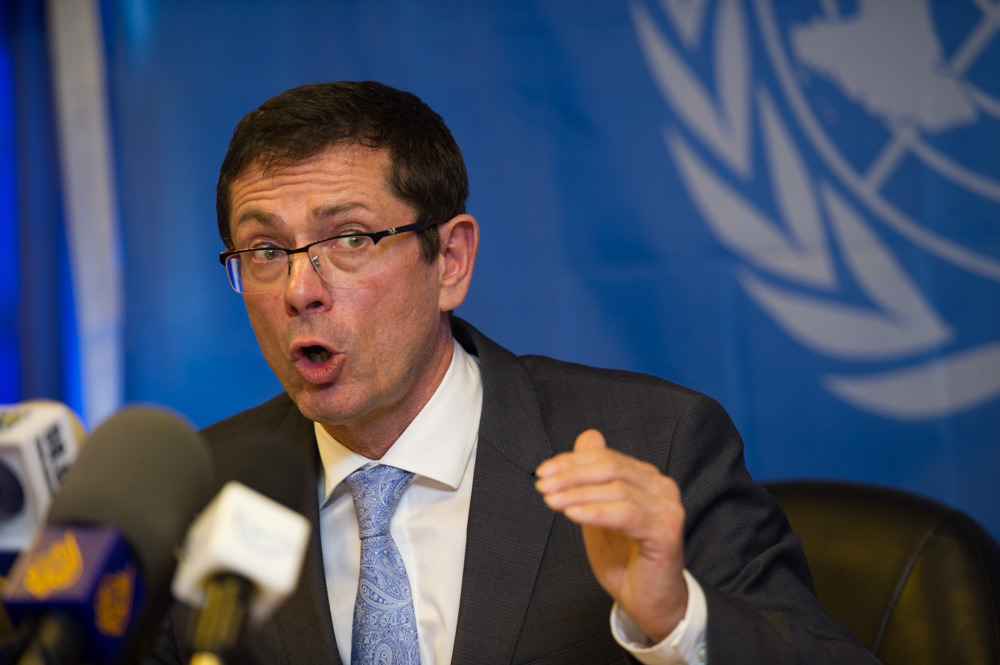 Victor Garang, a resident of Juba, recently heard that his brother had been shot by anti-government forces in the town of Bor, which has changed hands four times since the start of the crisis in mid-December.

“Many people have died,” he told IRIN. “Who are we going to blame for that? Everybody now is running in the bush, hungry. Other children are dying without food, even malaria - who is going to be accountable for that?”

But some commentators stressed the need for a ceasefire first. “I think we’re all probably seen the news of the IGAD [Intergovernmental Authority on Development] mediators’ attempt this week to obtain the release of the political detainees, and that’s a critically important issue going forward, especially in terms of political settlement,” said Kate Almquist Knopf, former US Agency for International Development assistant administrator for Africa. But, she cautioned, “it should not be a stumbling block for a ceasefire.”

Still, Šimonovic argues that there are benefits to raising the issue of accountability now, while the two sides are still warring and abuses are ongoing.

First, it is a kind of deterrence. "If investigations are going on, it's a clear message through various channels [that] facts are being gathered about violations, which is prerequisite for accountability - including one day individual accountability for violations," he said.

Further, if different groups continue blaming each other, there is no way forward for reconciliation. "If there are hard facts about victims, about violations, and about perpetrators, it increases the likelihood for two communities to get together and to understand that... in both communities you have ones who are victims and ones who are perpetrators of violations."

“The South Sudanese and the international community should show that we have learned the lesson history has taught us that without justice and reconciliation, residual pain from gross violations and other crimes are all too easily abused by those seeking power at any cost,” Daniel Bekele, Africa director at Human Rights Watch, said.