Members of civilian vigilante groups known as the “civilian joint task force” (CJTF) are taking an increasingly active role in the government’s fight against Boko Haram (BH). But while some residents call them heroes, others fear they are inciting BH to more directly target civilians, that they are committing abuses themselves and that they are eroding the already strained rule of law in Nigeria’s northeast.

Youths started forming these vigilante groups in June, in Maiduguri - the capital of Borno State and former seat of BH’s leadership - when they became fed up with BH’s incessant killings (see timeline).
CJTF members patrol the streets armed with machetes, bows and arrows and sticks, identifying BH suspects, whom they turn in to the government security Joint Task Force (JTF). At times they also attack or even kill suspects themselves. Once a self-organized group, most members now receive US$113 per month from the Borno State government.

CTJF head, Abubakar Mallum, told IRIN from Maiduguri that the vigilantes will not back down. “We have crossed the Rubicon and there is no going back. BH have declared war on us and even if we stop hunting them down, they will still come after us, so we have to fight to the finish.”

BH continues to incite terror in the northeast. In its latest attack, on 8 December, BH allegedly killed seven traders travelling in a motor boat on Lake Chad.

Abuses on all sides

Residents and rights groups have accused the CJTF of harassment and assault, including the beatings, torture and killings of BH suspects. “The CJTF commit some rights abuses and some of them act on the influence of drugs,” said Husseini Hala, head of the Nigerian Bar Association (NBA) in Maiduguri. But he added, “This is insignificant compared to what the insurgents [BH] are doing.”

CJTF’s activities have also led to the arrests of dozens of suspects whose cases were not investigated, and hundreds of whom have died or been killed in detention, according to residents, prisoners and rights groups.

Zanna Mustapha, Borno State deputy governor, at a 28 November ceremony launching a government training scheme targeting the CTJF in Maiduguri, said the vigilantes must be reined in: “It is only law enforcement agencies… who have the power to arrest or detain suspected criminals like Boko Haram sect members or robbers. The idea of the civilian JTF trying to take laws into their hands by acting alone is wrong. This must stop now.”

Festus Okoye, director of the Human Rights Monitor (HRM), agrees: “Arming and encouraging youths from diverse backgrounds to take up weapons and, in an unregulated manner, to block roads, make arrests, beat up suspects, kill those ‘found guilty’, and burn their houses and chase them out of town is dangerous to the rule of law and the current efforts aimed at tackling security challenges in Nigeria,”

On 1 June, hundreds of CJTF burned down the home of Mala Othman, the chairman of the ruling party in Borno State, accusing him of being a BH sponsor. Most recently, on 5 November, members of the CJTF allegedly killed eight herders they mistook for BH insurgents in Tumbun Gini Village, in Abadam District in northern Borno, on the border with Niger, according to Borno State police commissioner Lawan Tanko, who has opened an investigation into the incident.

According to him, the telecommunications shutdown in Borno State, in place from 15 May (phone services were restored in Maiduguri town on 3 December), allowed the CTJF killings in villages to occur unnoticed. It took 10 days for the police to hear of the herder killings - an unusually long time, he told IRIN.

BH violence has pushed beyond the boundaries of Maiduguri into villages along the borders of Cameroon, Chad and Niger, partly due to the CTJF, which was emboldened by government and JTF support to move beyond Maiduguri, say experts. “By pushing BH…into the countryside, the CJTF and soldiers made life precarious to villagers,” said Kyari Mohammed, a political science professor at Modibbo Adama University of Science and Technology Yola, in neighbouring Adamawa State.

BH is increasingly conducting ambushes along roads and disguising themselves as the military to set up false checkpoints in order to stop and kill passengers. Some say BH’s attacks on schools and direct attacks on Muslim worshippers are a retaliatory move not just against the JTF but also the CJTF for their cooperation with the military.

A member of the civilian joint task force in Maiduguri, northeastern Nigeria. Civilians started forming vigilante groups in May to try to crack down on Boko Haram killings. Now the government has welcomed them as part of a more official effort to crack do 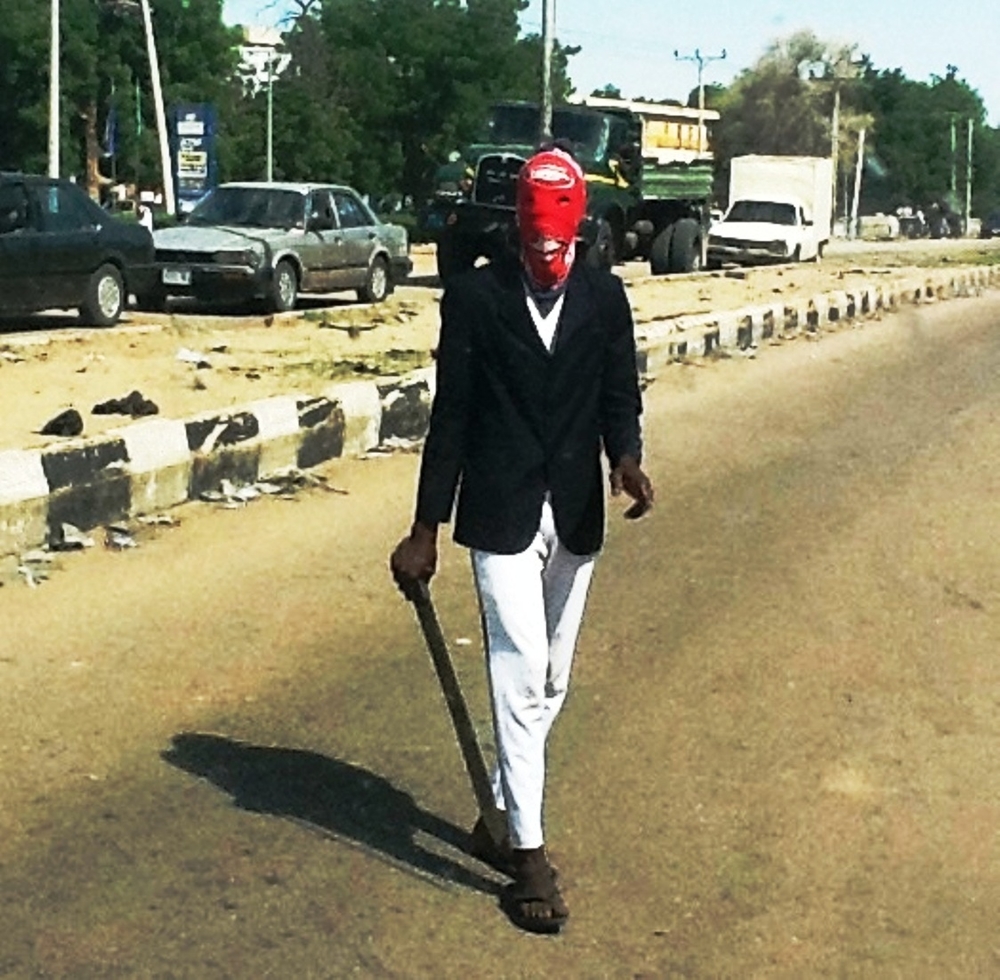 On 18 June, BH spokesman Abu Zinnira issued an audio clip from Damaturu, threatening an all-out war on youths in Maiduguri and Damaturu for helping the military. "We hereby declare an all-out war on you because you have formed an alliance with the Nigerian military and police to fight our brethren… We call on any parent that values the life of his son to stop him from exposing our members, otherwise he is dead.”

Members of the CJTF IRIN spoke to said they joined the group after their loved ones were killed. “We decided to join this fight to end BH because our relations, brothers, sisters and parents are being killed by BH. Peace has eluded us and we are fed up. We want to sanitize our city to what it used to be,” a female vigilante, who gave her name as Lami, told IRIN.

But many Borno residents say they are forced to joint CTJF’s against their will. As professor Mohammed put it: “Soldiers order villagers to form CJTF and kill them if they refuse, accusing them of being BH - and if they do, they face BH reprisals.”

Mohammed says the CJTF was created by the military as part of the government’s strategy to combat BH when its own methods were not working.

“The vigilantes were not a spontaneous reaction to BH but part of a military counter-insurgency, because the CJTF was formed out of repentant members of BH who were recruited by the military and unleashed on society,” he told IRIN.

The military initially employed a scorched-earth policy of indiscriminate killings and burning of homes in response to BH deadly attacks on military targets in Maiduguri, a strategy aimed at compelling residents to cooperate with troops in exposing BH insurgents, according to Mohammed. “When that did not work, they turned to the CJTF.”

As a result of the initial strategy - and years of civilian-military violence in northern Nigeria - many civilians fear the JTF as much as they do BH. When news came through of a BH attack, villagers would flee their homes “to escape jungle justice” said Hala. But “once the CJTF stepped in, the game completely changed, with the hunter becoming the hunted,” he said. “The civilian JTF are very effective in arresting Boko Haram members because they know them by their names and can easily identify them when they come across any of them.”

The military have repeatedly denied taking part in indiscriminate violence, for instance blaming BH's improvised explosive devices (IEDs) for causing fires that have destroyed homes in some of the fighting. "The IEDs used by BH terrorists are incendiary and oftentimes ignite fires that set houses on fire during attacks on military targets in the city… The destruction and deaths are then blamed on the JTF," the JTF's former spokesman Lt-Col Sagir Musa told IRIN in a 19 July interview in Maiduguri.

For Wase of UNDSS, the best way to professionalize and ensure a more disciplined CJTF is to “formally train them and integrate them into the security system.” Some 1,802 CJTF members have reportedly been trained to formally join Borno State security forces.

The Borno State government has also launched the Borno Youth Empowerment Scheme (BOYES), to train vigilantes in discipline, morality and religious precepts. It plans to train 5,000 CJTF members by 2014.

Encouraging CJTF to professionalize is one thing, said analysts, but the security forces that they join must also be free of abuse and be held to account for their missteps, they said.