Poor countries have thrown down the gauntlet as the UN climate talks under the UN Framework Convention on Climate Change (UNFCCC) entered their final week, when government ministers take over the negotiations in Poland.

Recognition of the impact climate change is having on food security, a mechanism to address loss and damage as the climate changes and finance to help countries adapt are the major issues for poor countries.

By the end of the first week, during which negotiations are handled by technocrats, some developed countries had adopted rigid positions on these issues, forcing strong reactions from some countries in the south.

Prakash Mathema, chair of the Least Developed Countries (LDC) group at the talks, is emphatic: "We are not going home without a loss and damage mechanism! They [some developed countries] cannot postpone this forever and ever. A commitment was made in Doha [Qatar, where the last UN talks were held in 2012] to set up a mechanism here in Warsaw." Others have upped the stakes even more.

Naderev "Yeb" Sano, the Philippines negotiator, who started fasting when Typhoon Haiyan struck his home town in the Philippines as the talks began, told IRIN on Monday - the eighth day of his protest - that he intended to continue his hunger strike until a decision to adopt a mechanism of loss and damage is made in Warsaw. One of the negotiators representing the Alliance of Small Island States (AOSIS), some of whom are threatened with extinction, is fasting in solidarity with Sano.

Emmanuel Dlamini, chair of the African group, told IRIN, "There are lots of issues that are not making headway; money is one of the major issues, but we are negotiating."

IRIN has staked out the positions of some negotiators on the main issues at present.

"We are not going home without a loss and damage mechanism"

Some developed countries are believed to have blocked this."They do not want loss and damage to have its own institutional place, and want it to rather exist in adaptation. Of course, the worry is that it will develop into something bigger, and might lead to countries seeking compensation," said a negotiator who did not want to be named.

At a press briefing, US climate change envoy Todd Stern refused to comment on the loss and damage issue. He said they were engaged on it and was "listening to what everyone had to say".

Samantha Smith, leader of the Global Climate and Energy Initiative for the World Wide Fund for Nature, told IRIN that some wealthy countries are “unwilling to get involved in substantive discussions on finance, but the parties agreed in Doha to establish this mechanism."

In fact, the G-77 text on the finance element of the proposed mechanism does not say clearly that it will need money, and "rather fudges the issue", saying that the financial facility of the proposed mechanism should be "[assist]ing with the delivery of the financial support," said Harjeet Singh, ActionAid's international coordinator for climate change adaptation and disaster risk reduction.

Naderev Sano, the Philippines negotiator, clutching his flask of water, says he sees his fast as a “philosophical and spiritual quest”, after having seen little movement at the UN climate talks 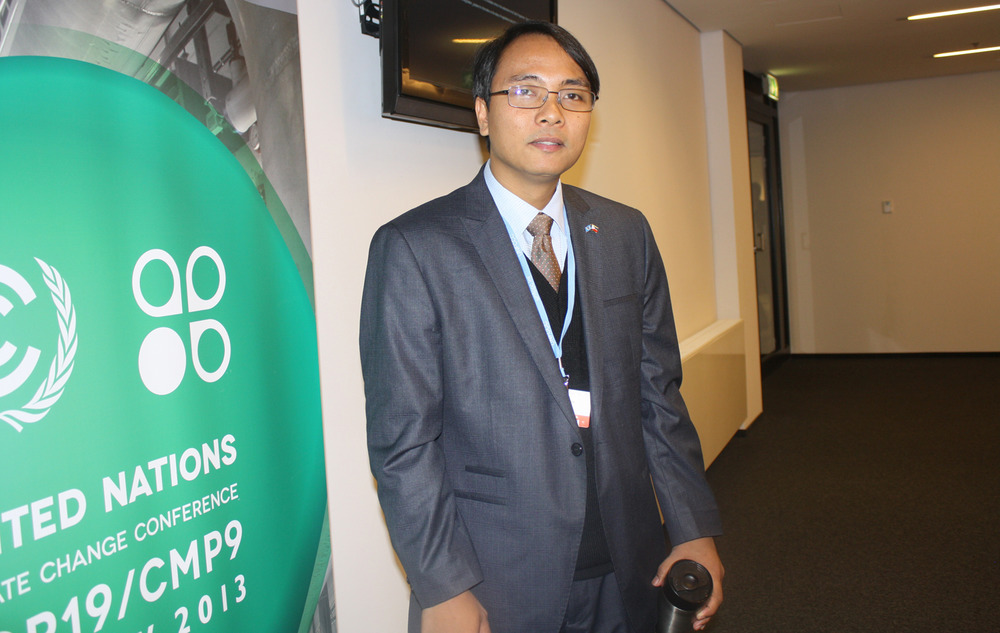 Loss and damage expert Saleemul Huq, a scientist with the International Institute for Environment and Development (IIED), thought the decision not to directly broach the issue of seeking finance was a strategic one to get buy-in from the developed world. "The first priority is to get a mechanism and we could look into finance later."

Koko Warner, a scientist with the UN University in Bonn, who has led several studies to build evidence-based data on loss and damage says, "A part of the world needs to realize that it is the question of small countries' sovereignty at stake. Big politics does not really care about the small people."

Singh adds that the fact a country like the Philippines, which has a disaster preparedness system tough enough to handle 20 typhoons a year, was "now overwhelmed with Haiyan is a sign of things to come, and countries need all the support they can [get] now."

Agriculture: Discussions about much-needed support for agriculture - which is seen both as a victim and a cause of climate change - have been postponed until next year.

Agriculture is a contentious and emotionally fraught issue. It causes the emission of major greenhouses gases, such as nitrous oxide and methane, and the Intergovernmental Panel on Climate Change (IPCC) estimates that agriculture accounts for 13.5 percent of all man-made greenhouse gas emissions.

But climate change also threatens agriculture, which most developing countries' populations rely on for income. The impact of climate change threatens global food security; projections show that yields from food crops could decline by five percent for each degree Celsius rise in global warming. Many poor farmers are already experiencing the impact of increasingly variable rainfall.

At the same time, developing countries are arguing that they need more money and better technology to help farmers adapt to the impact of climate change, including frequent droughts, flooding and higher soil salinity.

Ram Kishan, the regional emergency manager in South Asia for Christian Aid, who follows the agriculture track in the negotiations, told IRIN, "For the developing world, agriculture is our mainstay and is an issue that affects our people's food security, so we need money and technical support to adapt our agriculture, rather than mitigate," Big countries like the US, he pointed out, talk in terms of providing support to reduce emissions and improve "production". "For our people, it is not about getting production numbers up - what is the point of that if they cannot access food."

As a compromise, developing countries have been calling for a work programme on the issue. "Having a work programme on agriculture approved at the climate talks would allow scientific and technical experts to do a comprehensive review of how agriculture can contribute to future solutions, both in terms of adaptation and mitigation," Robert Carlson, the president of the World Farmers Organization, said in a statement.

"This work programme would deliver the scientific basis we need to move forward on agriculture in the climate change talks. It is needed before any further discussions about including agriculture in a future framework can take place."

Kishan says a way out of the deadlock would be to address agriculture in various segments. "The countries who want to look at the mitigation efforts could raise it there, while those who want to consider it under adaptation should be allowed to raise it there, and seek assistance through those channels such as the Adaptation Fund. And maybe even consider it under the proposed loss and damage mechanism."

Rwanda's agriculture minister, Agnes Kalibata, attending the UN climate talks for the first time, said perhaps agriculture has not managed to find a strong enough voice was because the talks have been left in the hands of environment ministers. Most countries' governments operate in silos, said the minister, who is an agricultural scientist. "We in Rwanda don't have the luxury to do that. As the most densely populated country in Africa, all the ministries work together, as every issue affects the other."

Money: Lack of funds affects every aspect of the talks. The Adaptation Fund had set a goal to raise US$100 million by the end of 2013, "otherwise it will run out of funds by the end of 2014", said Jan Kowalzig, of the UK-based development agency, Oxfam. "But nothing had come so far. It is not a lot of money - if they divide it between 10 countries, it is $10 million each."

The Adaptation Fund, which is financed through a levy on international carbon market transactions, is unable to raise money as there is only one such market in the European Union, and it has not been performing that well.

In a report released on Tuesday, the UN Environment Programme said Africa is already facing adaptation costs in the range of $7 billion-15 billion per year by 2020. These costs will rise rapidly after 2020, since higher levels of warming will result in higher impacts. Adaptation costs for Africa could reach approximately around $35 billion per year by the 2040s and $200 billion per year by the 2070s, with total costs reaching 1 percent of the continent’s gross domestic product by 2100, if the world does not try to steer itself on a path that would keep the hike in global temperatures below two degrees Celsius.

Increasingly, the developed countries have been referring to raising money for adaptation through the private sector, Kowalzig added. "No company is going to provide funds for adaptation when there is no profit-incentive."

At the 2009 UN climate conference in Copenhagen, developed countries said they would provide $100 billion a year from 2020 onwards to help poor countries adapt to and mitigate climate change. "Developing countries have been asking the rich countries to provide projections of their commitment, to be able to plan their policy approaches, but even that has not been forthcoming."