Tanzania will likely fall short of its 2015 reproductive health targets, which aim to reduce the estimated one million abortions, 2.9 million unintended births, 18,000 maternal deaths and 500,000 child deaths that occur every year because of poor of access to family planning services, say experts in the field.

In 2010, the government said it planned to increase the proportion of women using contraception from 27 to 60 percent - or from 2.1 million to 4.2 million women (or their partners) - over the next five years, part of efforts to reduce the country’s high infant and maternal mortality rates.

“Our estimation indicates that this target is not achievable,” said Peter Bujari, executive director of Health Development Tanzania, an NGO that monitors government spending on reproductive health programs.

He added, “We estimate Tanzania will hit about 47 percent [contraception prevalence rate], at best, if all the momentum and promises of government and donors since last year are honoured and sustained.”

Tanzania’s national contraceptive prevalence rate is well below that of its neighbours, like Rwanda (45 percent), Uganda (30 percent) and Kenya (46 percent).

An issue of funding

“The government will need to increase its investment in health, and particularly reproductive health, if Tanzania is to achieve these targets,” Bujari noted. “There is also need to ensure that funds meant for the provision of reproductive health services are disbursed in a timely manner.”

Simon Mbele, the executive director of UMATI, a national NGO providing sexual and reproductive health information and services in Tanzania, told IRIN that, “while the government [has] shown commitment in meeting these targets, like putting more money in areas with low prevalence rates, time might too short to reach the 60 percent goal.”

“Modest government funds for family planning increased threefold from 2010 to 2011,” according to Advance Family Planning, a health rights advocacy group led by the Bill and Melinda Gates Institute for Population and Reproductive Health and the Johns Hopkins Bloomberg School of Public Health. Though the budget includes a line for contraceptives, “national budget allocation and actual spending for contraceptives remains weak.”

A survey carried out by reproductive rights NGO Marie Stopes International revealed that just 700,000 more women used contraceptives between 2010 and 2012.

Pasiens Mapunda, a reproductive health expert at Pathfinder International, told IRIN that while “women are beginning to take up family planning and facility births are increasing” challenges such as “inadequate health facilities, long distance[s] from homes to the nearest available hospital and even low staffing still remain and needs to be dealt with.”

Senior government officials, however, told IRIN they are upbeat about meeting their target.

“We committed ourselves to reach that target and we are confident of achieving it, there is no doubt about it,” said Minister of Health Hussein Mwinyi.

But he admitted there are hurdles. “The task to raise the number of family planning users in the country to 4.2 million by 2015 is daunting, and has its challenges, notably inadequate budget allocation.” He added that “the government [is] mobilizing resources to meet the target”.

“We have outlined different priority strategies that require funding, and our partners in development are willing to support us. We might not have spent on family planning as needed, but the government must also fund other priority areas,” he said. 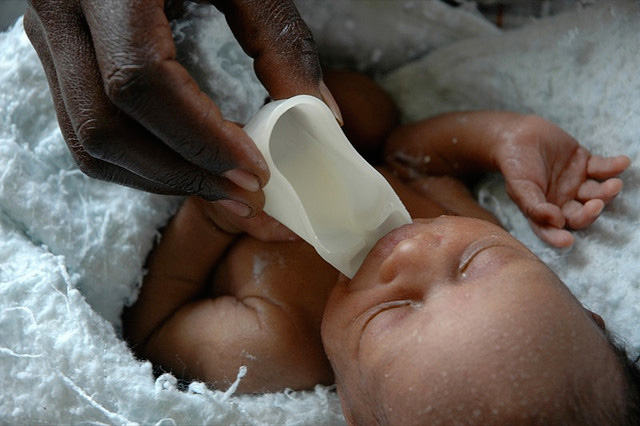 According to the Health Policy Initiative, “although public health sector financing more than doubled between 2006 and 2012, only about 10 percent of the government budget is dedicated to health, far below the 15 percent recommended under the Abuja Declaration. This translates to about $14.90 per person (in 2012), significantly below the World Health Organization’s recommendation of $54 and still short of Tanzania’s goal of $15.75 found in the 2009-2015 Health Sector Strategic Plan III.”

Of those who had to pay bribes, 78 percent reported that they were demanded by a service provider.

In rural areas, few contraceptives are available and health facilities are poorly staffed.

Yuanita Clement, a 25-year-old mother of four, told IRIN: “When I went to the health centre near home and told them I wanted a permanent method [of birth control], they referred me to another facility which is far away. I got discouraged because it is very far and I need money to get there.”

Officials hope partners will help address these and other concerns.

Pathfinder International’s Mapunda said that, “partnership[s] between the government and non-state actors to train community health workers... will ensure reproductive health services reach those in rural areas who currently are largely marginalized.”

Health Minister Mwinyi said: “We are also working closely with the private sector because we believe such [a] partnership is crucial if we are to reach our ultimate goal of providing quality family planning services.”

Volunteer community health worker Zawadi Muleka visits up to five homes a day in Mwenge, a low-income region in Tanzania’s commercial capital, Dar es Salaam. Her duties include reminding expectant mothers about antenatal visits or the need to deliver at a health facility or, at times, counselling couples on family planning. Such workers are part of government and partner efforts to improve the uptake of reproductive health services.

“We are overwhelmed as health workers, and we can’t reach out to everybody, but we rely on community volunteers to bring people to take up family planning services, even though it should be noted that relying on them alone is not enough,” she said.

“There is need for the government to put more money to make the health care system functional, because even that alone will motivate health workers,” she added.

“The bad birth care experiences of women undermine the reputation of the health care system, lower community expectations of facility birth, and sustain high rates of home deliveries,” said the authors of a recent paper.

They added, “The only way to increase the rate of skilled attendance at birth in the current Tanzanian context is to make facility birth (child birth done at a health facility) a safer alternative than home birth. The findings from this study indicate that there is a long way to go.”

According to the World Health Organization, “the vast majority of maternal deaths could be prevented if women had access to quality family planning services; skilled care during pregnancy, childbirth, and the first month after delivery; or post-abortion care services and, where permissible, safe abortion services.”