Climatic stressors like recurrent droughts and floods are already causing real damage to livelihoods, eroding people’s ability to adapt or improve their lives, says a new series of studies.

The authors urged negotiators gathering in Warsaw on 11 November for talks under the UN Framework Convention on Climate Change (UNFCCC) to redouble their efforts to mitigate the effects of climate change.

They also made a case for building an “institutional home” under the UNFCCC for “loss and damage” caused by climate change. There is no agreed-upon definition for "loss and damage", but the phrase broadly refers to a range of harms incurred in developing countries that cannot be avoided through efforts to mitigate or adapt to climate change. The negotiators in the Warsaw meeting have to decide what kind of institutional set-up could address loss and damage, including how it would be evaluated and whether there should be financial redress for countries experiencing it.

The need to address loss and damage was first acknowledged at the UN climate talk in Cancun in 2010. In the last talks, in Doha in 2012, countries spoke of considering a mechanism to address the issue - such as instituting financial compensation - at the UNFCCC process in Warsaw.

Any new climate change treaty would only come into effect in 2015, at a UNFCCC meeting in Paris.

Published in the peer-reviewed International Journal of Global Warming, the studies are the second in a series to gather evidence of loss and damage from the perspectives of affected people. The first of the series was published in the run-up to the UN climate change talks in 2012.

"Loss and damage poses a challenge, to bring about a profound new rethinking in policy, as it will need to focus on preparatory, transformative actions… as it is no longer a matter of ‘giving adaptation a chance’ "

For instance, surveys in 10 villages of mostly Fulani pastoralists in northern Burkina Faso, which experienced droughts in 2004 and again in 2010, revealed that most of respondents were forced to sell property, land and livestock to buy food. Some received food aid, while others adapted by migrating to neighbouring countries like Cote d’Ivoire to support their families back home. Despite their best efforts, 87 percent of households “had to severely restrict their food consumption.” The sale of assets erodes a community’s efforts to cope in the long-term, notes the main report summarizing the findings. As the cycle of drought continues, their limited livestock is being depleted and the households are unable to replenish it, ultimately leading to a loss in their cultural identity and lifestyle.

IRIN found similar stories in Niger’s Diffa region, where recurrent droughts have forced members of the WoDaabe community, a sub-sect of the Fulanis, to give up their nomadic way of life and live on the fringes of Diffa town with a considerably diminished quality of life.

“Following a severe flood in Ethiopia in 2007, 94 percent of respondents reported that their crops were severely damaged or entirely destroyed. Large-scale destruction of crops also led to higher food prices, which made staple foods such as maize unaffordable,” Fatima Denton, coordinator of the African Climate Policy Centre, a partner for the African case studies, said in a press release. “Time and time again, the study found that households that are already struggling are forced into deeper poverty due to climate change impacts. When adaptation is insufficient to manage climatic stressors, the loss and damage that results will undermine human well-being and sustainable development.”

The studies echo what a recent Overseas Development Institute study showed: that climate shocks will hurt the Millennium Development Goal (MDG) target to reduce poverty. People “already appear to be approaching the biophysical and social boundaries of adaptation”, compromising human well-being or sustainable development for good, said a report published by the UNU.

Warner, the scientific director of the Loss and Damage in Vulnerable Countries Initiative, told IRIN “loss and damage” poses “a challenge, to bring about a profound new rethinking in policy, as it will need to focus on preparatory, transformative actions… as it is no longer a matter of ‘giving adaptation a chance’ and then making efforts to address loss and damage. This is happening in parallel with adaptation,” she added.

Kawit, Cavite -People wade in floods at the height of torrential rains on 18 August 2013 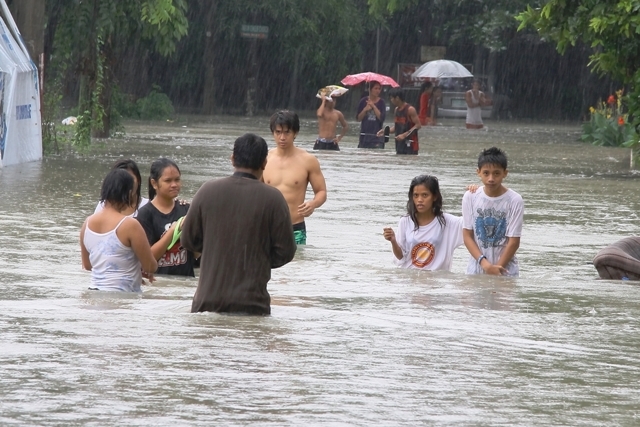 The year 2015 is already being called a landmark year for policy. It will not only see the birth of a new climate treaty but could also see a new set of goals to succeed MDGs - the Sustainable Development Goals (SDGs) - and the formalization of a new plan to make the world safer from natural hazards, which would replace the Hyogo Framework for Action.

There is now widespread recognition that climate change could have a detrimental impact on development; calls have been made for more interaction between experts in adaptation, disaster risk reduction (DRR) and development. Warner said these “conversations” must also include “loss and damage”.

The studies also make a case for taking risk-management approaches - such as insurance - to address loss and damage.

But Harjeet Singh, ActionAid's international coordinator for DRR and climate change adaptation, said in an email, "Limiting the scope of loss and damage work at UNFCCC to risk management will be nothing less than a blunder. This is what most developed countries are trying to do... While the loss and damage agenda will help drive ambition in mitigation and adaptation, its key task is to generate knowledge, coordinate with relevant institutions, and develop ways to tackle the situation when adaptation and risk management fail! The challenge ahead of us is: What should happen when land and biodiversity are permanently lost, land becomes non-arable, islands go undersea and the marine ecosystem is disrupted due to temperature rise?"

Insurance will not cover losses that are incalculable, such as the loss of a country, biodiversity or culture, as in the case of the Fulani. But how can such losses be covered? These are some of the questions that both Singh and Warner are seeking answers for.

Warner acknowledges that insurance will not address all the losses.

Sven Harmeling, the climate change advocacy coordinator for the NGO CARE International, says huge losses such as the extinction of island states can still be avoided through "ambitious mitigation now."

He says governments and individuals should also pursue other means besides insurance to redress their losses. "There may, eg, be legal claims in the future requesting support for adaptation or rehabilitation of damages, or for compensation of losses suffered. But perhaps we will also see enhanced solidarity between rich populations and those who will be increasingly affected by dramatic losses and widespread damages. The establishment of an effective UNFCCC mechanism on loss and damage can help all countries to better address [it] and may reduce the need to pursue such other means.”