This article is part of our in-depth coverage. Read more like this...
JOHANNESBURG

In pink tracksuit and big sunglasses, Nomvula Mokonyane, premier of South Africa’s Gauteng Province, delivered a warning to the drug dealers of Eldorado Park that had the crowd buzzing: “Leave, your days are numbered!”

But then a distraught mother, urged to speak but unable to, brought everyone back down to earth with the news that her addict daughter had just died.

The mother was one of the organizers of the 2 June prayer march by Mokanyane and community leaders to confront Eldorado Park’s drug problem - her 14-year-old daughter had committed suicide just a few hours earlier.

Eldorado Park, south of Johannesburg, is mainly low-cost small brick housing and council-owned apartment blocks, next door to Soweto. It was established by apartheid city planners in the late 1960s as a mixed race, so-called “coloured” township, and today the 350,000-strong community still suffers high rates of poverty and neglect.

But in May it attracted a visit by President Jacob Zuma, in response to a series of public letters that went viral written by a group of mothers appealing for help against a “wave of drugs [that] has swept over our community and has taken over our lives, killing our children by the day. Children as young as eight are drug addicts”.

The letter, addressed to Zuma, went on: “Help us lock up these murderers, drug dealers for good. Set up a special court for all drug-related crime. Close down all the Lolly Lounges [named after the lollipop shape of the home-made pipe used to smoke methamphetamine]. Dismiss all corrupt cops that [are] on a payroll. Call in the K9 unit. We need a rehab centre that will assist with detoxing our kids and give them a second chance at life. We need recreation centres to keep our kids busy… Let us have compulsory drug testing at our schools.”

Councillor Peter Rafferty believes the drug culture in Eldorado Park changed with the arrival of cheap methamphetamine, known as tik, as the drug of choice in the last few years. “Unemployment has become much bigger in the last five years. It’s not just the youth, if you’re 40-plus and have been retrenched, the chances of finding work are slim,” he told IRIN.

He also pointed an accusing finger at parents for neglecting their children and the school system for a lack of support - only a handful of Eldorado Park’s 25 schools have a drug policy.

There is a sense of exclusion felt by “coloureds” in South Africa, where “racialized” identities are rarely escaped, and the community has few political champions. “Drugs are especially rife in the coloured townships,” said Lorreal Ferris, station manager of Eldoz FM. “It’s a form of escapism, but it’s also bread on the table. [Drug dealing] provides for families and communities, but also destroys families and communities - that’s the Catch-22.”

How widespread is drug use in Eldorado Park? Nobody seems to know, but anecdotally everybody IRIN spoke to said someone in their extended family was using – typically tik. The consequences include a rate of crime that impoverishes everybody - from stealing from your Mum’s purse to buy a US$5 bag of meth, to pilfering the copper on the window handles at schools, to the street lights smashed for their bulbs to make lolly pipes.

There is a sense of bewilderment over how quickly tik took over. Before the police cracked down in May, dealers seemed to be operating on every other street in Eldorado Park. “The streets were crazy, large groups of people walking around late at night going to get their drugs,” said Le-Verge Constance, who used ketamine up until a year ago, when she was partying hard but still managing to hold down a managerial job. 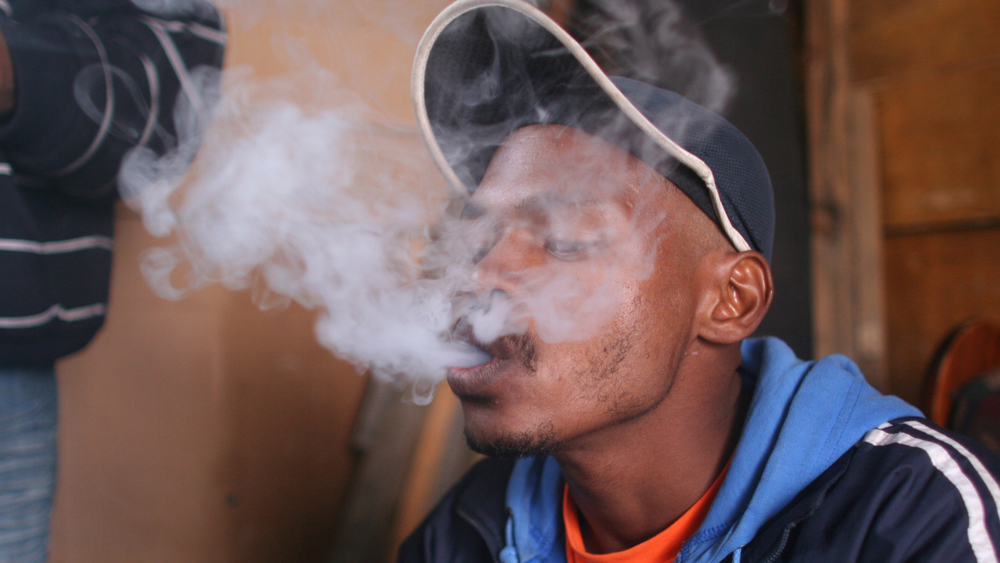 “Drugs are fun, it’s about socializing and partying, but what a lot of people don’t understand is that your body can become addicted,” she told IRIN. “You think your mind is stronger and you can control it.”

Constance now hosts a weekly chat show for recovering addicts on Eldoz FM. In the year that she has been clean, she has seen a change in drug use in Eldorado Park. From being part of the clubbing culture it has shifted to lolly lounges - where with up to 20 people in a house, safe from police attention, you can blaze away undisturbed until your money runs out. It is also where women and girl tik addicts are extremely vulnerable, some running away from home to spend weeks in a house, swapping sex for drugs.

Elton Guerio, 28, has witnessed it many times. Out of work since 2005, both his parents dead, four of his five siblings - including two sisters - on meth, his family home was one of the lolly lounges visited by Mokanyane and the prayer marchers. “Tik is easily accessible, it’s like giving a child sweets, especially for girls. They give it to the girls on purpose so they can use them,” he told IRIN.

Cheryl Pillay runs the Come Back Mission (CBM), at its offices across the road from her house, offering help to women standing up to alcohol and drug addiction. For her, young girls trading sex for tik is a critical part of “the whole lolly lounges thing”. Sexual violence, and HIV, are just some of the consequences.

According to CBM, as many as 60 percent of households in Eldorado Park are single-parent run. While that does not automatically mean alarm bells should sound, it nevertheless represents hurdles for children and parents to struggle through in a community with a dizzying unemployment rate. Pillay has time and again seen girls tripped up by problems at home or school, slip into addiction and wind up in lolly lounges.

“The first night you’re on a high, and you can stay like that for three or four days, enjoying yourself. But you don’t want to go home and seem high to your parents, so you stay there until the drugs are out of your system or you run out of money,” Guerio told IRIN.

Guerio, now off meth, works for Liesel Valoo, another redoubtable woman fighting for her community. His job is to find lolly lounges where girls are staying, and Valoo goes in and gets them. Valoo’s NGO is the South African Drug Abuse and AIDS Council, and she is a bustling bundle of energy. “When Liesel comes for you, there is only one option, you must go.”

The police in Eldorado Park have taken action, closing down 20 lolly lounges, arresting over 130 people for drug-related crimes, and re-opening hundreds of previously closed cases. Some of that targeting has been a result of tip-offs by Pillay. She chairs the Local Drug Action Committee, which among other things collects the names of dealers and details of how they operate, often sent in by their neighbours. But Pillay is clear that just sending dealers to jail is not the solution, given the lack of rehabilitation provided by the criminal justice system.

“If you are caught with one bag - why not do community service?” asked Rafferty. “Most of the guys caught are the runners, and he won’t talk as his life is at stake. The analysis lab is in Pretoria and it takes months to get the results. Meanwhile, the guy is out on bail that night and the community thinks ‘corruption’.”

"Even though everybody condemns drug peddling, deep down we understand why they do it"

Arrests for petty crime like public drinking or possession of marijuana burdens youths with a criminal record that prevents them from being employed. Several community leaders called for a wiping of the slate as a positive step forward. “Every child before the age of 18 has been arrested three or four times,” Pastor Marcus Jacobs told IRIN. “They will never be able to work in a bank, for example, until that data is cleaned.”

For Ferris, “even though everybody condemns drug peddling, deep down we understand why they do it. There needs to be a dialogue, they need to ask for, and be given, forgiveness.”

The South African government recognizes the link between substance abuse and socioeconomic strife, and is seeking to pull a range of departments together - from health and education to police and correctional services - to work collaboratively in Eldorado Park. The strategy involves reducing demand, supply and harm, while also focusing on prevention, early intervention, treatment and after-care, according to SAPA, the South African government news agency.

The visit by Zuma and the high-profile police presence has calmed the streets of Eldorado Park, but drugs remain available - just driven back underground. “Drugs are a symptom of something else. To say we’re winning the drug war is very naïve. But we can hope to make a dent,” said Rafferty.